Copyright License: © 2019 Cisse AR, et al. This is an open access article distributed under the Creative Commons Attribution License, which permits unrestricted use, distribution, and reproduction in any medium, provided the original work is properly cited.

Methods: This is a prospective study of the medical coverage of the 2016 International Cycling Tour of Burkina Faso.

Results: During the 12 days of medical coverage, 216 consultations were recorded. The complaints were diversified. From simple asthenia to severe malaria. There were cases of indigestion, gastroenteritis and food allergies.

Conclusion: The medical coverage of a cycling competition requires knowledge of the discipline, expertise in sport and emergency medicine.

Since 1987, Burkina Faso has been organizing the International Cycling Tour called “Tour du Faso”, one of the largest cycling races in Africa [1-5]. The bicycle was introduced in Burkina Faso by the missionaries in 1912 [6]. The first official cycling race was held on September 18, 1955 in Ouagadougou. On December 13, 1959, as part of the festivities for the proclamation of independence, a criterium was organized in Ouagadougou. The competition was won by the Frenchman Jacques Anquetil ahead of Italian Fausto Coppi, both former winners of the Tour de France. The Burkinabe’s enthusiasm for cycling competitions dates back to that time. In the early 1980s, the revolutionary regime created the “Sourou Road”. This was to enable the countries of the sub-region to appreciate the major agricultural developmental works. In 1987, all African youth were invited to visit Burkina Faso by bike. To give an international dimension to the first Tour du Faso, the country’s authorities invited the Soviet Union. The Burkinabe’s passion for cycling has allowed the Tour du Faso to grow over the years. Since 2001, the group Amaury Sport Organization (ASO) has been involved in the organization of the competition by bringing its experience in cycling competitions (Tour de France) and cars (Rally Paris - Dakar) [7]. The competition has been organized since 2009 by the State of Burkina Faso jointly with the Burkinabe Cycling Federation under the UCI regulations. Today, the Tour du Faso is one of the biggest stage cycling races in Africa.

This sporting event continues to enthrall each year thousands of spectators and viewers from Africa and all over the World. It creates during the competition a national mobilization whose scope goes beyond the sports environment. The organization of this event is based on several commissions. The Medical Committee is responsible for providing first aid to athletes, their technical staff members and members of other commissions. There are on the continent several races recognized by the International Cycling Union (UCI) in 2017 [4]. But few studies have been devoted to the organization of the medical coverage of these competitions. Medical coverage of the 29th “Tour du Faso” primarily aimed to report the experience of the medical coverage of the 2016 International Cycling Tour of Burkina Faso. This will serve as a model of other medical teams in cycling tours.

It is a prospective study reporting the experience of the medical coverage of the 2016 International Cycling Tour of Burkina Faso. All types of injuries sustained by athletes and officials during the race were recorded.

The 29th edition organized from 28 October to 06 November 2016 (Figure 1) was attended by 13 teams including 3 from Burkina Faso and 10 from the rest of Africa and Europe (Table 1). The competition consisted of 10 stages of online racing, a competition distance of 1337.1 km and 837.9 km of transshipment. The organization of the 29th International Cycling Tour of Burkina Faso was based on six commissions (technical, health, safety, logistics, accommodation, catering and press). The medical team consisted of two doctors and five nurses. Logistically there were three ambulances and a light car that gave care immediate care as it was at the level of runners. In cities where the caravan was to spend the night, a hotel room or tent (Figure 2) was reserved for use as a sick bed. 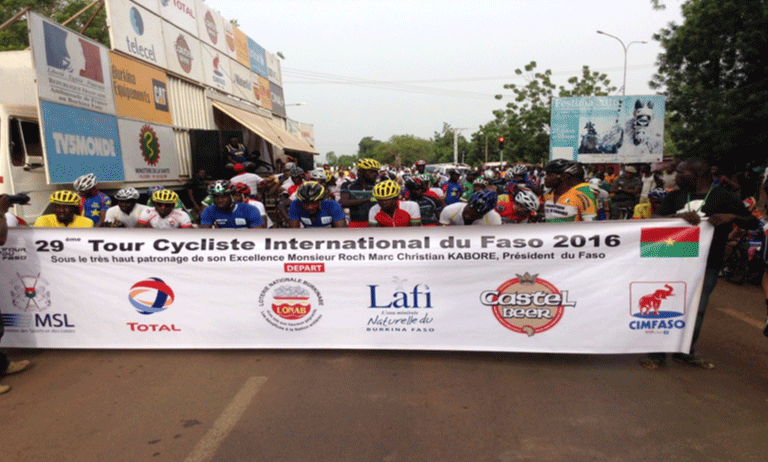 Figure 1: Photograph of the starting line of the 29th“Tour du Faso”. 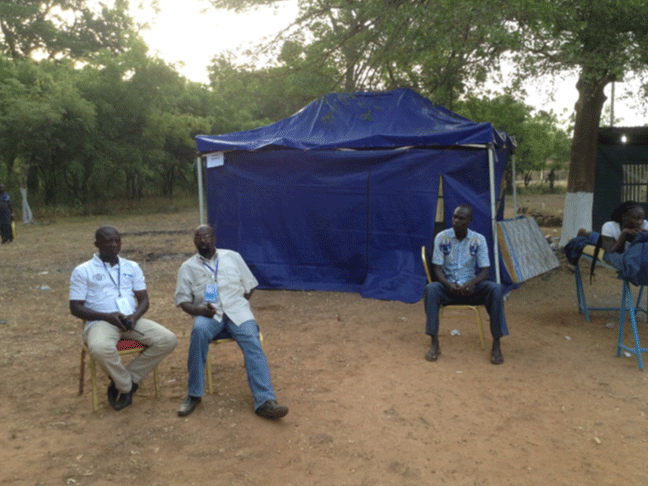 Figure 2: Photograph of a tent serving as a consultation room at the arrival of the stage.

The medical team had three personal care kits, a medical kit and an immobilizer kit. The composition of the different kits is given in tables 2-4 respectively. The permanence of the medical service starts 24 hours before the start of the competition and ends 24 hours after its closure.

During the race, all the logistics attributed to the medical team were within the caravan. All vehicles had a permanently connected Radio Tour receiver and an official vinyl of the 29th Tour du Faso. The position of the vehicles in the race level (Figure 3) was determined by the commissaries jury and based on the UCI regulations. A road book containing all the relevant information and the different rules of the competition was made available to all members of the various committees (Figure 4). 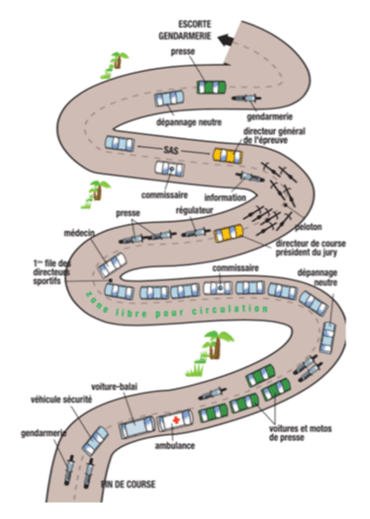 Figure 3: Positioning of caravan vehicles during the race. 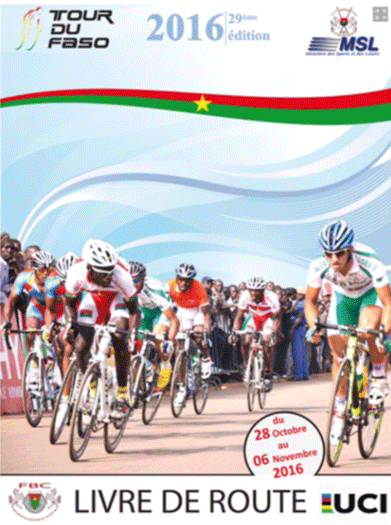 First aid in case of fall or any other health related issue in the middle of the race was done on the bike or on the sidewalk, often under the view of the cameras and spectators. The sick competitors and seriously injured were immediately evacuated to the nearest hospitals. Traumatic injuries were dominated by superficial skin injuries. The few cases of osteo-articular lesions were located mainly at the wrist and the shoulder. A case of wound of the lower lip of the mouth was recorded (Figure 5). The knee was the anatomical region most affected by the technopathies. 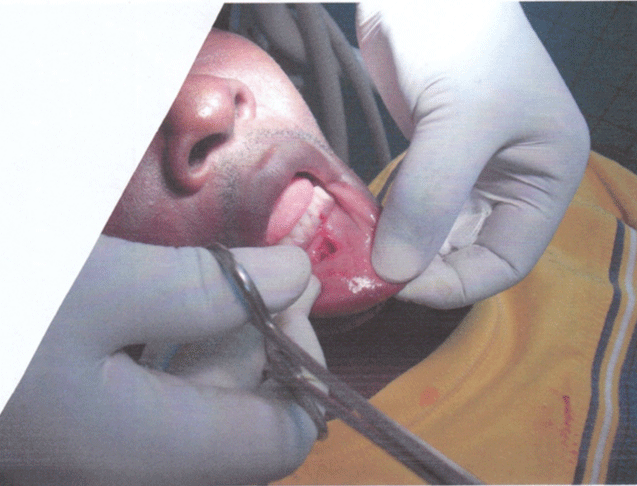 Figure 5: Clinical image of a perforation of the lower lip of the mouth after a fall.

Cycling is one of the few sports that have featured in all the editions of the modern Olympic Games. The International Cycling Union (UCI) is the International Cycling Federation recognized by the International Olympic Committee (IOC) [5]. Founded in Paris in 1900, its headquarters are in Aigle, Switzerland. The UCI manages and promotes the nine disciplines of cycling: road cycling, track cycling, mountain bike, bicycle motocross (BMX) Racing, BMX Freestyle, para-cycling, cyclo-cross, trial and indoors cycling. Five of them are on the program of the Olympic Games (road, track, mountain bike, BMX Super-cross and BMX Freestyle Park). The most popular discipline is undeniably road cycling. There are online races (departure given in platoon) and individual or team time trials (regular departure). The race can take place on a day (the classics) or in stages (Tours) [4]. To properly fulfill its mission, the UCI collaborates with five continental confederations. At the level of the African Cycling Confederation (CAC), there were only 19 national federations in 2017 that organized events on the UCI calendar. The oldest and most regular of these is the International Cycling Tour of Burkina Faso on the UCI Africa Tour 2.2 calendar [3,4].

The medical team of the Tour must meet the needs of consultation and care of the entire caravan (riders and members of commissions). During the 12 days of medical coverage, 216 consultations were recorded. The complaints were diversified from simple asthenia to severe malaria. There were cases of indigestion, gastroenteritis, food allergies. The main reasons for consultation were traumatic injuries following falls and technopathies [10,11].

The medical coverage of a cycling competition requires knowledge of the discipline, expertise in sport and emergency medicine. The members of medical team have to be able to make quick and accurate cares. Increasing of socio-economic and political aspects of cycling events must be accompanied by efficient medical coverage.

Ethical approval: This article does not contain any studies with human participants or animals performed by any of the authors.

Funding information: No benefits in any form have been received or will be received from a commercial party related directly or indirectly to the subject of this article.