Copyright License: © 2019 Oishi K, et al. This is an open access article distributed under the Creative Commons Attribution License, which permits unrestricted use, distribution, and reproduction in any medium, provided the original work is properly cited.

Methods: Chondrocytes from five old patients with knee OA (OAC) and five young patients with recurrent shoulder dislocation (non-OAC) were used. The chondrocytes from passages 1 to 3 were analyzed for the expression of cell surface markers (CD73, CD90, CD105, and CD44) by flow cytometric analysis. Chondrocytes of passage 4 were cultured as pellets for re-differentiation and evaluated histologically. Real-time PCR were performed to measure the chondrogenic related genes transcriptional levels.

Results: OAC and non-OAC had comparable positive ratios for CD44, CD73, CD90, and CD105. The expression of CD105 was upregulated from passage 1 to passage 3 in OAC, and it increased at the same level as in non-OAC during passage 2 and 3. The expression of COL2 decreased from passage 1 to passage 3 in both the groups. There were no statistical differences in the Bern Scores between OAC and non-OAC.

Conclusion: The chondrocytes from OA patients and young adult patients had chondrogenic re-differentiation potential. The changes in cell surface markers and chondrogenic related genes showed similarity for both the groups. Our findings suggest that OAC can become the cell source for ACI.

Autologous chondrocyte implantation (ACI) is an accepted treatment for focal cartilage defects such as osteochondritis dissecans (OCD) and traumatic chondral injury [1,2]. Young and active patients are generally good candidates for ACI [3]. Since monolayer culture of chondrocytes is economical and technically simple, it is the most common method for cell propagation in ACI. However, monolayer passage of chondrocytes results in dramatic changes in cell shape and loss of the chondrocyte phenotype, i.e. a reduction of type II collagen and aggrecan [4]. These “de-differentiated cells” are expected to regain chondrogenic properties such as “re-differentiation” in ACI treatment. Recently, it has been reported that the cell surface markers (CD90, CD105, and CD166) of mesenchymal stem cells (MSCs) are expressed on human articular chondrocytes during monolayer culture [5]. Furthermore, it is known that the cell surface marker expression of human articular chondrocytes changes during monolayer expansion [5,6]. Additionally cells with MSC characteristics increased in human osteoarthritis (OA) cartilage [7].

The study was approved by the Committee of Medical Ethics of Hirosaki, University Graduate School of Medicine. All patients gave written informed consent to participate. Five knee OA patients (5 females, mean age of 69.6 ± 8.4) and 5 recurrent shoulder dislocation young patients without OA (5 males, mean age of 19.0 ± 3.1) were included in this study. Exclusion criteria for our study were history of rheumatoid arthritis, hepatic disease, renal disease, and malignant disease. Cartilage tissue was harvested from an unaffected portion of the femoral condyles and tibia plateaus during total knee arthroplasty in OA patients, and from the glenoid rim of the scapula during arthroscopic Bankart repair procedure for patients with recurrent shoulder dislocation. Chondrocytes derived from OA patients were defined as OAC, and chondrocytes derived from young adult patients were defined as non-OAC.

Chondrocytes were primarily cultured and passaged as previously reported [13]. Briefly, the collected cartilage pieces were digested with collagenase, and the liberated cells were suspended in DMEM supplemented with 20% fetal bovine serum. The adhered cells were used as the primary culture of chondrocytes, which were expanded by repeated passages. At passages 1 and 3 (P1 and 3).

The mRNA levels of chondrogenic-related genes were analyzed using real-time PCR. Total RNA was extracted from chondrocytes cultured in monolayer (passages 1 to 3) and pellet culture using a NucleoSpin RNA (Macherey-Nagel, Dusseldorf, Germany) according to the manufacturer’s instructions. Each 1 μg of total RNA was reverse transcribed using a Rever TraAce qPCR Master Mix (QIAGEN). The reactions were heated at 50°C for one minute and 95°C for ten minutes followed by 40 cycles of 95°C for 15 sec and 60°C for one minute using an ABI Prism® 7000 Sequence Detection System (Applied Biosystems, Foster City, CA, USA). Specific primer pairs for each gene (Table 1) were designed using Primer Express software (Applied Biosystems). The expression level of each gene was normalized with that of the housekeeping gene, glyceradeyde-3-phosphate dehydrogenase (G3PDH).

CD73, CD90 and CD44 showed values close to 100% at each passage without a significant difference in both the OAC and non-OAC (Figure 1). CD 105 expression was upregulated from passage 1 to passage 3 in both groups. Although it was significantly lower in OAC at passage 1, CD105 expression increased at the same level of non-OAC in the passage 2 and 3. 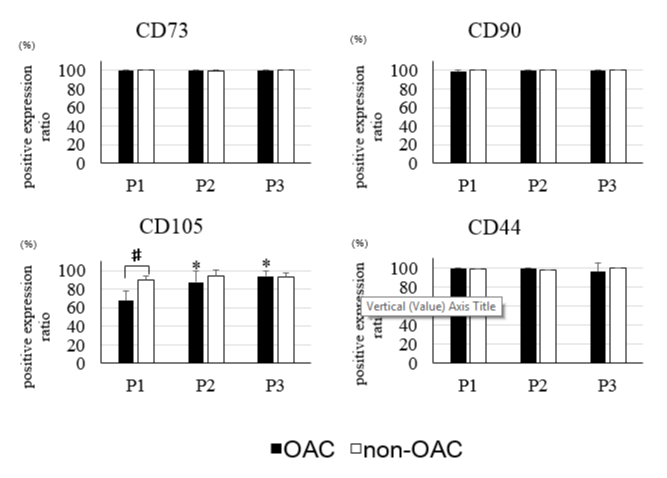 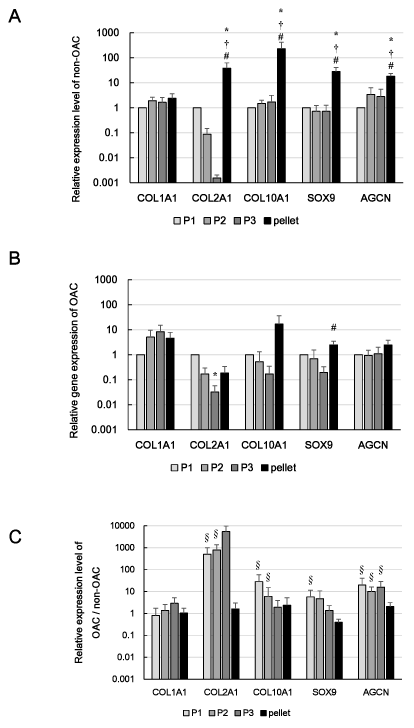 Comparing OAC and non-OAC in the same passage or pellets, OAC had higher expression of chondrogenic related genes than non-OAC during monolayer culture (Figure 3). Although the expression of COL2A1 in passage 1, 2 and 3 was 509, 787 and 6466 times respectively, it decreased 1.61-fold in the pellet culture. The COL10A1, SOX9 and AGCN also showed similar changes, which is less than COL2A1.

Pellets derived from passage 4 cells displayed near equivalent uniformity and intensity of collagen type I staining in the OAC and non-OAC (Figure 3). Intensity of collagen type II was stronger in OAC than non-OAC. There were no statistically significant differences in the subscales and the total scores of the Bern Score between OAC and non-OAC (Table 2). 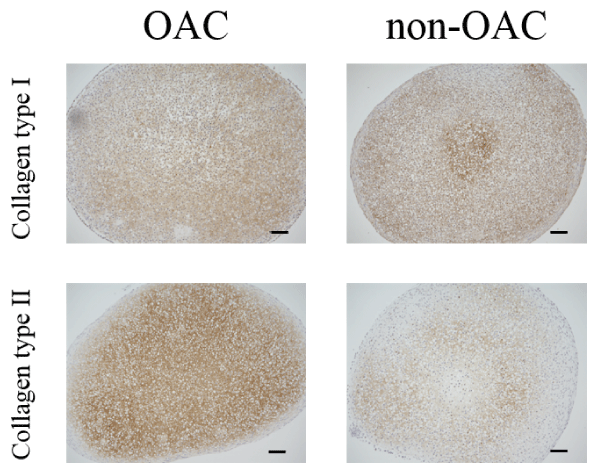 The current study investigated re-differentiation potential of chondrocytes from OA patients and young adult patients. Cell surface markers and chondrogenic related gene expression of OAC and non-OAC showed de-differentiated change in monolayer culture. Although the recovery of chondrogenic genes except for COL1A1 was inferior in the OAC to non-OAC, chondrogenic related genes expression and Bern score of OAC showed similar results to that of non-OAC in the pellet culture after monolayer culture. Previous studies showed different results regarding the chondrogenic potential of chondrocytes derived from OA patients [9,10]. Dehne et al. [10], reported that chondrogenic capacity was not significantly affected by OA and OAC fulfill the requirements for matrix-associated ACI. On the other hand, Yang et al. [9], reported that the clear differences between chondrocytes from healthy and OA joints exist and that these are not completely abolished during the process of de- and re-differentiation. Since the control group was different, previous studies have shown mixed results.

Four MSC markers, CD73, CD90, CD105 and CD44, were co-expressed in both OAC and non-OAC. CD105 and CD44 were regarded as the markers indicating differentiation [15,16]. CD105, also called endoglin, is a cell surface-expressed receptor that is part of the transforming growth factor β (TGF-β) receptor complex [15]. CD105 expression is associated with a less differentiated, more proliferative progenitor cell state. Freshly isolated articular chondrocytes express hardly any CD105, and the expression of CD105 increases gradually with sub cultivation [5,17]. On the other hand, CD44 is a cell surface-expressed transmembrane glycoprotein that acts as a receptor binding extracellular matrix compounds such as hyaluronic acid, osteopontin, collagen, fibronectin, laminin, and P- and L-selectins [16]. CD44 is involved in the recruitment of mesenchymal stem cells and the onset of regenerative processes and thus may be a common mesenchymal stem cell characteristic. Therefore, the high CD105 and CD44 expression levels indicate a largely de-differentiated cellular state. In our study, the expression of CD44 was already high at passage 1, CD 105 gradually increased during monolayer culture and the expression of CD105 was higher in OAC than non-OAC in passage 1. These results suggest that de-differentiation occurred during monolayer culture, and OAC had higher chondrogenic differentiation than non-OAC. This was further supported by the chondrogenic gene expression, which was higher in the OAC.

De-differentiation was also observed in both OAC and non-OAC in real time PCR analysis during passage 1 and passage 2 (Figure 2). Which is in accordance with previous data showing that chondrocytes after monolayer culture have decreasing amounts of COL2A1 and increasing amounts of COL1A1during passage [18,19]. Although the chondrogenic related gene expression of non-OAC was low during monolayer culture, it was at the same level compared with that of OAC in the pellet culture (Figure 3). These results suggest that non-OAC had well re-differentiation potential.

There were several limitations in this sturdy. First, chondrocytes were isolated from different joints, which may affect chondrogenic gene expression and re-differentiation potential. Novakofski et al. [19], reported that different joints have different baseline characteristics and response to injury. Because of ethical reasons, control samples could not be harvested from healthy knee joints. In this study, chondral tissue was harvested by routine Bankart repair. Second, this study did not investigate the inflammatory environment in harvested joints, which may affect the re-differentiation potential. Cytokines, including IL-1 and TNF-α, are known to induce cartilage degeneration and to reduce collagen type II expression [21]. Although the inflammatory environment, IL-1 and TNF- α, was not evaluated, it was approximated by the blood examination and operative findings in this series. Third, only a small number of patients were included in this study. Barbero et al. [22], investigated the chondrogenic capacity of many patients, and showed the large variability of chondrocytes. Although we investigated a small number patient, chondrocytes derived from young and old patient were used for this study. Finally, the availability of OAC was not confirmed in this study. Laganà M et al., reported that cellular yield and proliferation rates of OAC between the level of cartilage degeneration (ICRS score). Low degree of cartilage degeneration the cellular yield was maintained. However, Dozin et al., reported that cell proliferation significantly decreased with increasing age at Passage 1. In practical use, the effects of degeneration cartilage and age need to be carefully considered.

In conclusion, this study showed the re-differentiation potential of OAC and non-OAC. The changes to cell surface markers and chondrogenic related genes of OAC were similar to that of non-OAC through monolayer culture and pellet culture. Although the COL2A1 expression recovered partially in OAC in pellet culture, the chondrogenic related gene expressions of OAC was on the same level as non-OAC. Therefore, chondrocytes from healthy portions of knee in OA patients can be used as a cell source of ACI.

This research is partially supported by the Project Focused on Developing Key Evaluation Technology: Evaluation for Industrialization in the Field of Regenerative Medicine from Japan Agency for Medical Research and development, AMED and Ministry of Economy, Trade and Industry, METI. This research is also partially supported by Olympus RMS Co. Ltd.