Copyright License: © 2017 Labib AA, et al. This is an open access article distributed under the Creative Commons Attribution License, which permits unrestricted use, distribution, and reproduction in any medium, provided the original work is properly cited.

In this work an efficient method developed for the synthesis of 125I-benzofuran-2-yl) pyridin-2-amine (125IBPA), followed by radioiodination with 125I by using Chloramine-T at pH 8. The reaction proceeds within 10 min at room temperature (20-25°C). The radiochemical yield determined by Thin-Layer Chromatography (TLC) using hexane:ethyl acetate (1:6 v/v) and the purity analyzed by high-performance liquid chromatography using a reversed-phase RP18column and acetonitrile:0.1 M ammonium bicarbonate (pH 7.5) (1:1) as the mobile phase at a flow rate of 1 ml×min−1. The radiochemical yield using aH2O2 oxidant found equal to 96.5% with a radiochemical purity of 125I-BPA of over 96.5%. The biodistribution data in normal mice indicated a high initial uptake of 6.54±0.10 (% ID/g±SD) in the brain within 30 min post-injection. These results promote a further the use of 125I-BPA as a novel agent for brain imaging.

Pyridine derivatives of different heterocyclic nuclei have potent pharmacological properties including antifungal [1], antitubercular [2], antibacterial [3], antimicrobial [4-7], and insecticidal [8]. Heterocyclic Mannich bases are well known and important nitrogen compounds. Several methods have been applied for their synthesis. Most of the derivatives of heterocyclic Mannich bases have been found to possess considerable biological activities [9]. Alzheimer ’s disease (AD) is a leading cause of dementia with symptoms that include cognitive decline, irreversible memory loss, disorientation, language impairment, and an inability to carry out normal daily functions. Currently, it is difficult for clinicians to differentiate between the cognitive decline associated with normal aging and that associated with AD [10]. A definitive diagnosis of AD can only be established by postmortem histopathological examination [11]. Postmortem brains of AD patients reveal neuropathological features including Senile Plaques (SPs) and Neuro-Fibrillary Tangles (NFTs), which contain β-Amyloid (Aβ) peptides and highly phosphorylated tau proteins, respectively [12]. Although several radioiodinated or 99mTc-labeled ligands for Aβ plaques have been reported, unfavorable pharmacokinetics including low uptake into the brain and slow washout have prevented clinical studies. [123I]-6-iodo-2-(4′-dimethylamino)phenyl-imidazo[1,2-a]pyridine (IMPY) is the first Single Photon Emission Tomography (SPECT )imaging agent to be tested in humans [13]. Although [123I]-IMPY showed excellent properties as an Aβ imaging probe in preclinical studies, the preliminary clinical data displayed a low signal-to-noise ratio, making it difficult to distinguish AD patients, possibly because of its high lipophilicity and low stability in vivo. Therefore, there is no SPECT imaging probe useful for the clinical diagnosis of AD [14]. In this work, a simple method for syntheses and radioiodination of 125I-BPA was studied. A preliminary in vivo study of 125I-BPA in normal mice was completed to elucidate the biological behavior of this labeled compound.

The following instruments and materials were used. A gamma counter (Nucleous Model 2010, Oak Ridge, USA), connected with a well type NaI(Tl) crystal. The High-Performance Liquid Chromatography (HPLC) machine [Sykam Model] was equipped with a S-2100 solvent delivery system, a S-5111 injector valve bracket, a UV/VIS spectrophotometric detector S-3240 and a C-18 Lichrosorb analytical column (250 mm×4-6 mm, 5 mm inner diameter). All melting points were determined on an electrothermal melting point apparatus and are uncorrected. IR spectra were recorded (KBr discs) on a Shimadzu FT-IR-8201 PC spectrophotometer (Kyoto, Japan). 1H-NMR and 13C-NMR spectra were recorded in CDCl3 and (CD3)2SO solutions on a Varian Gemini 300 MHz (Varian Inc., Palo Alto, CA) and JNM-LA 400 FT-NMR system spectrometer (Japan Electronic Optics Laboratory Co. Ltd., Tokyo, Japan) and chemical shifts are expressed in δ units using TMS as an internal reference. Mass spectra were recorded on a Shimadzu GCMS-QP1000 EX mass spectrometer (70 eV, Shimadzu, Kyoto, Japan). Elemental analyses were carried out at the Micro Analytical Center of the University of Cairo, Giza, Egypt. All other chemicals were purchased from Merck Co. Radioactive iodine-125 was purchased from Institute of Isotopes Co., Ltd. (Budapest, Hungary). Solution pH was adjusted to pH 7 before use. The ethanol used was 99 % ethanol. To prepare the AgCl-impregnated filter, Whatman No. 3 filter paper (0=5 mm and t=0.33 mm and basis weight 185 gm/m) was immersed into a 0.5 N aqueous solution of AgNO3. After drying in the dark, the filter was immersed into 1 N HCl and then repeatedly washed with distilled water up to neutral reaction and kept in the darkness up to use. 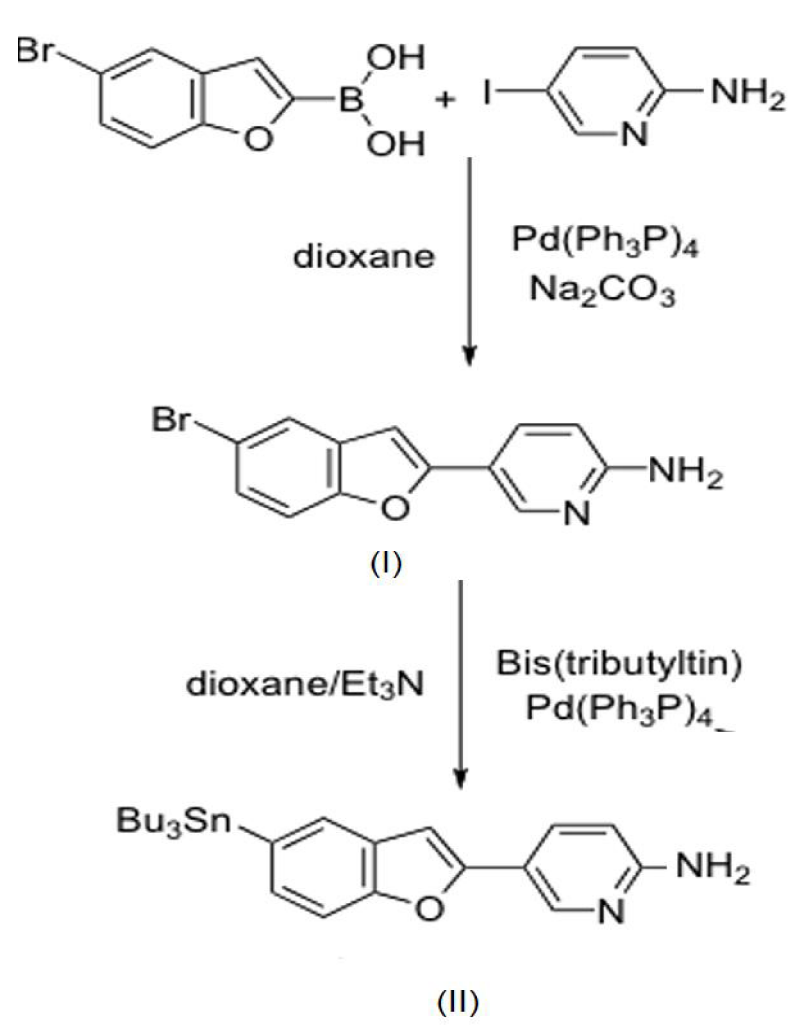 Preparation of 125I-BPA using chloramine-T (CAT): In a reaction vial, 0-200 μg of chloramine-T(CAT), an oxidizing agent was added to a mixture of 5-(5-(tributylstannyl) benzofuran-2-yl) pyridin-2-amine (10-200 μg/0.5 ml of EtOH), 5µl of Na125I. The reaction could proceed at room temperature (20-25°C) for 0-120 min, after which 0.1 ml NaHSO3 (32 mmol/L) was added to quench the reaction. The reaction mixture was extracted with ethyl acetate and then was passed through an AgCl-impregnated filter [15], followed by a conjugated bacterial filter (0.22 μm Millipore filter) and subjected to chromatographic analysis.

The radiochemical yield and purity of the labeled product, 125I-BPA, were determined by TLC and HPLC as follows. Silica gel G60 on alumina sheets was used for radiochemical yield determination. A 5-μL portion of the reaction mixture was placed at 2 cm from the base and developed using hexane: ethyl acetate (1:6 v/v) as the developing solvent. The strips were dried under N2 gas, cut into 1-cm segments, and assayed for radioactivity. The radio-iodinated product, 125I-BPA, has an Rf=0.7, whereas 125I has an Rf=0.3. The radiochemical yield was calculated in a similar fashion. Typically, the radiochemical purity of the product was more than 96.5 % by TLC. A 10-μL portion of the reaction mixture was injected onto the HPLC column (RP18-Lichrosorb) and eluted with acetonitrile 0.1 M ammonium bicarbonate (pH 7.5) (1:1). The retention time (RT) of 125I-BPA was 10 min, whereas the RT of 125I was 2 min.

Swiss Albino mice weighing 30-35 gm, purchased from the Agriculture Research Center, Cairo, Egypt. The animals were exposed to constant environmental and nutritional conditions throughout the experimental period and were maintained at room temperature (22±2°C) with a 12 h on/off light schedule. Standard access to food and water was provided.

Mice were injected directly into a tail vein with 100 µl of 10 % EtOH containing 125I-BPA (37 kBq). The mice (male, n=5 for each time point) were sacrificed at 2, 10, 30, and 60 min post injection. The organs of interest were removed and weighed, and the radioactivity was measured with a gamma counter. The percentage dose per organ was calculated by comparing the tissue counts to suitably diluted aliquots of the injected material. The % dose/g of samples was calculated by comparing the sample counts with the count of the diluted initial dose.

The effect of the amount of the oxidizing agent CAT on the labeling yield of 125I-BPA is demonstrated in figure 2. CAT is a mild oxidizing agent that can oxidize I- into I+ without forming I2. At low amounts of CAT (10 µg), the radiochemical yield of 125I-BPA was low at 68.9%. A high radiochemical yield of 95.5% was achieved by increasing the amount of CAT to 250 µg. Increasing the CAT amount above 250 µg led to a decrease in the iodination yield where at 250 µg of CAT the decrease in yield may be attributed to the formation of undesirable oxidative byproducts like chlorination. Consequently, 250 µg of CAT is highly recommended to avoid the formation of any byproducts and obtain a high labeling yield figure 2. 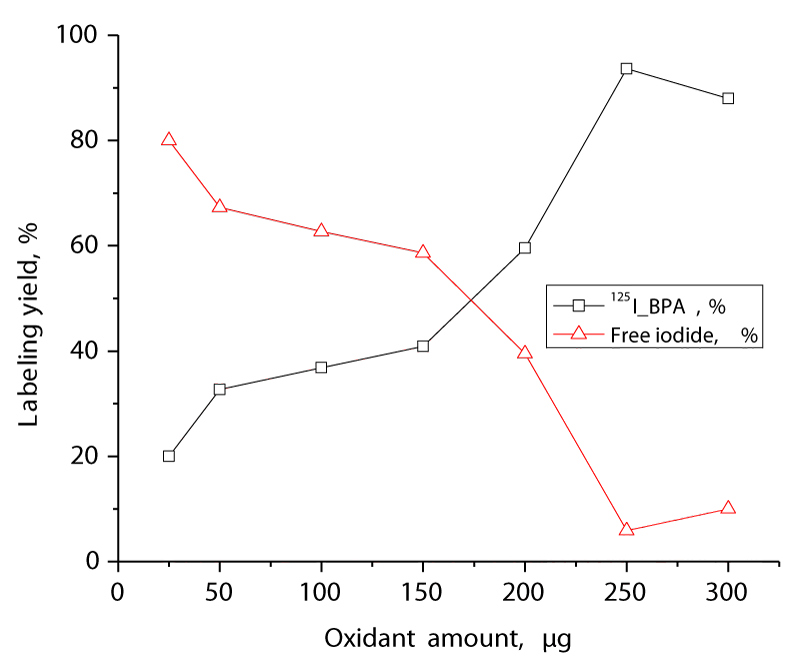 Figure 2: Variation of the radiochemical yield of 125I-BPA as a function of CAT; reaction conditions: 10 µl (3.7 MBq) Na125I, 100 µl of BPA, various concentrations of CAT at pH 8. The reaction mixtures were kept at room temperature for 10 min.

The dependence of radiochemical yield on the amount of 125I-BPA is shown in figure 3. The reaction was performed at different BPA amounts (10-200 µg). The radiochemical yield of 125I-BPA was only 80 % at 10 µg BPA. As the BPA concentration increased, the labeling yield increased to 96.5 % when 100 µg of BPA was used. This improvement in yield may be attributed to the fact that 100 µg of BPA is sufficient to capture the generated iodonium ion, and as a result, the maximum yield was achieved. 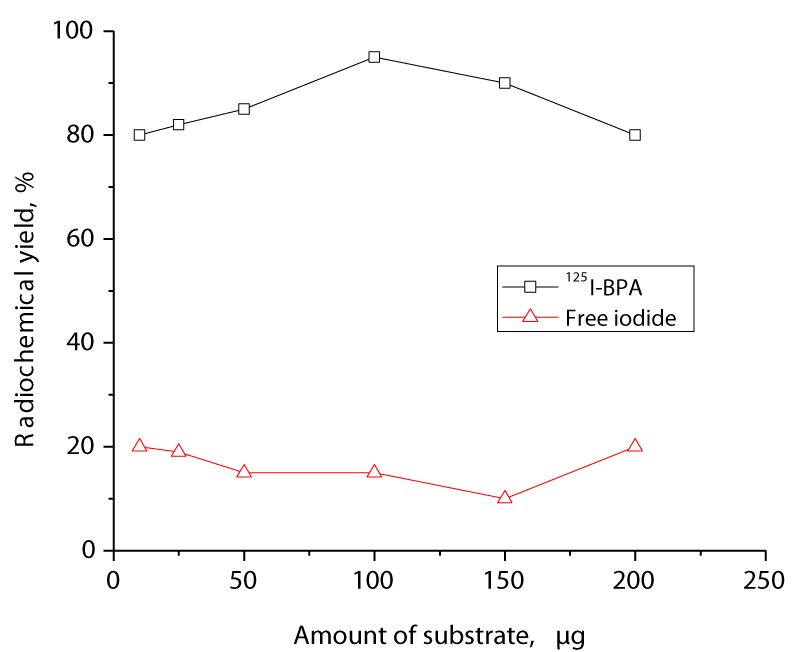 Figure 3: Variation of the radiochemical yield of 125I-BPA as a function of different BPA amounts. The reaction conditions were 10 µg (7.3MBq) Na125Iand 100 µg of CAT at pH 8. The reaction mixtures were kept at room temperature for 10 min.

Effect of pH on the reaction

The effect of the reaction mixture pH on the labeling of BPA was studied by varying the pH from 2 to 10 as shown in figure 4. The experiment was performed using 100 µg of BPA. The CAT amount used was 250 µg, while the other factors were kept constant. The experiment was repeated using 200 µl of each buffer at different pH values. The labeling yield at each pH was measured and the 96.5% was obtained at pH 8. Increasing the pH of the medium above 8 led to a slight decrease in the iodination yield 95.5 % at pH 9 (Figure 4). 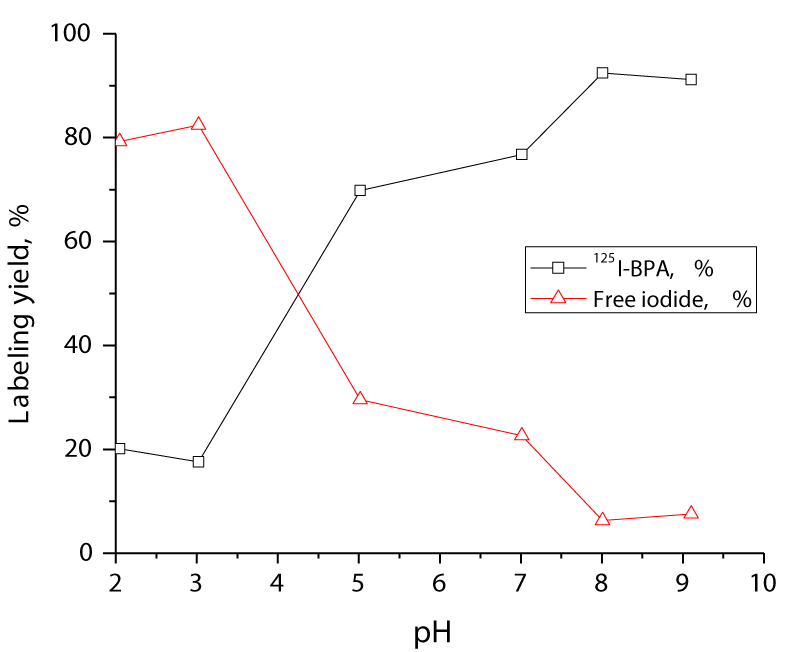 The labeling yield is strongly dependent on reaction time in the range from 2 to 30 min. It is evident from figure 5 that the yield was significantly increased as the reaction time increased. The reaction was very fast and after 10 min, the maximum radiochemical yield 96.5 % was obtained. 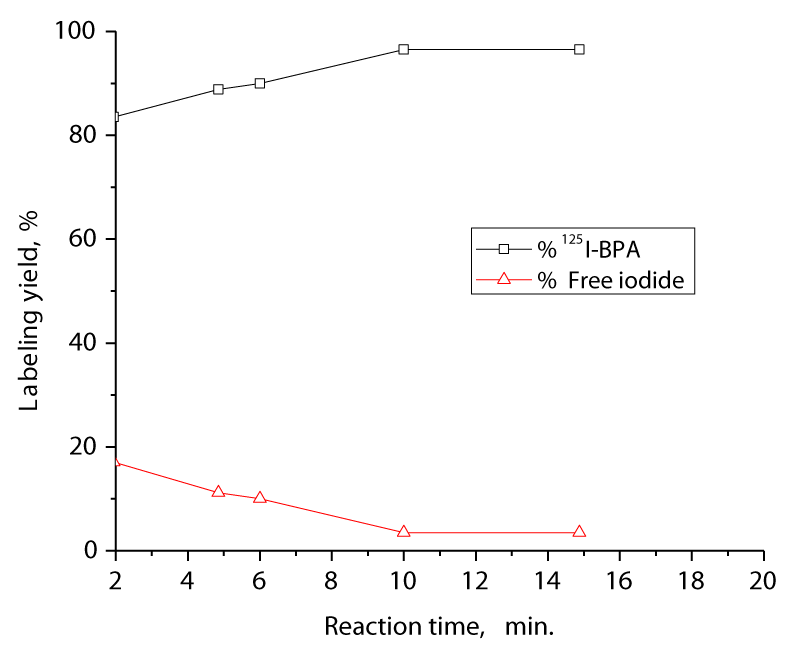 Figure 5: Variation of the radiochemical yield of 125I-BPA as a function of reaction time. The reaction conditions were 10 µg (7.3 MBq) Na125I, 100 µg of BPA, and 250 µg of CAT at pH 8. The reaction mixtures were kept at room temperature for the indicated intervals of time.

In vitro stability of 125I BPA

The in vitro stability of 125I-BPA was studied to determine the most suitable time for injection to avoid the formation of the undesired products that resulted from the radiolysis of the labeled compound. In vivo, these undesired radioactive products might be accumulated in non-target organs. As shown in Figure 6, no significant changes in the relative content of 125I-BPA were observed for up to 24 h post labeling, indicating that the labeled compound is very stable (Figure 6). 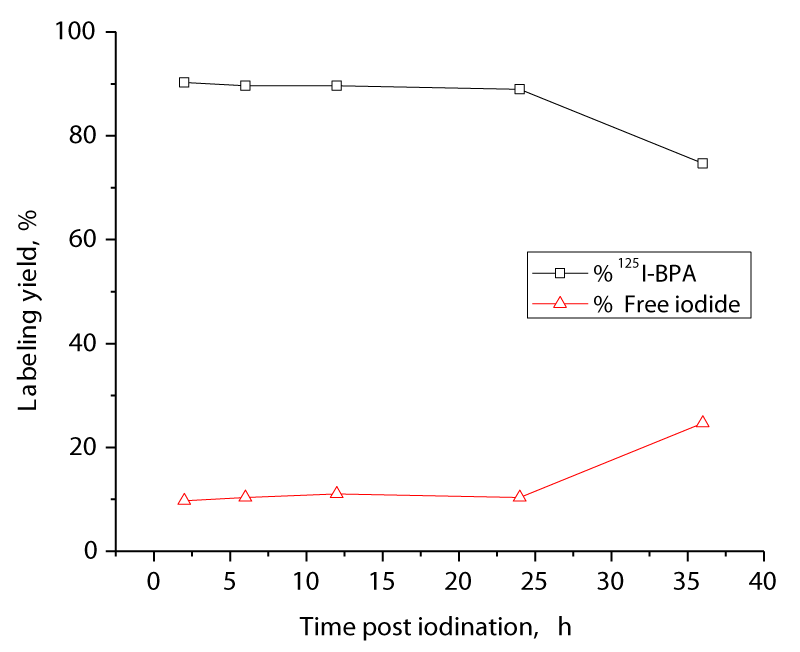 The biodistribution pattern of 125I-BPA is shown in table 1. 125I-BPA was injected in normal mice intravenously and was distributed throughout the body organs and fluids. All radioactivity levels are expressed as the average percentage of injected dose per gram (% ID/g±SD). The biodistribution data showed substantial uptake of the imaging agent at 6.54±0.10 (% ID/g±SD) in the brain at 30 min post-injection. After this time, the point radioactivity dropped to 0.09±0.01 at 120 min post-injection. The high amounts of radioactivity in the intestine indicated that excretion of the 125I-BPA derivative occurred mainly through the hepatobiliary pathway. The low radioactivity located in the thyroid gland indicates that the iodocompounds are stable against in vivo deiodination. The high accumulation of 125I-BPA in the lungs is likely because the lungs function as a reservoir for antidepressants with high affinity to the serotonin transporter. The biodistribution data showed substantial lung uptake of 4.18±0.54 (% ID/g± SD) at 15 min post injection. The maximum brain uptake of 125I-BPA is analogous to that of the currently used radiopharmaceuticals for brain imaging, 99mTc-ECD and 99mTc-HMPAO, which have maximum brain uptake of 4.7 and 2.25 %, respectively. These preliminary results strongly suggest that BPA labeled with 125I could be used as a novel agent for brain imaging.

BPA was successfully synthesized and radiolabeled with 125I using CAT. 125I-BPA showed good in vitro stability. In biodistribution experiments using normal mice, 125I-BPA displayed good uptake into the brain followed by fast clearance. Radioactivity was also distributed to several other organs, such as the liver, kidneys, and intestines. In addition to accumulating in the brain, the lungs and stomach showed an initial high uptake resulting in moderate accumulation over time, while the liver and kidneys accumulated radioactivity over the first 15 minutes followed by a rapid decrease. The radioactive probe accumulated in the intestines and did not wash out over the period monitored in this experiment.