Copyright License: © 2018 de Moraes Filho RM, et al. This is an open access article distributed under the Creative Commons Attribution License, which permits unrestricted use, distribution, and reproduction in any medium, provided the original work is properly cited.

Psidium guajava (guava) is an important crop and economic resource in many tropical countries and Brazil stands out as one of its major commercial producers. The guava crop has been severely attacked by the plant parasitic nematode Meloidogyne enterolobii which has caused drastic reduction of productivity and, in some cases, even total loss of cultivated areas. The use of resistant rootstocks that are tolerant to these soil pathogens can be a low-cost solution to this pathogen, which has established itself as one of the major constraints for the cultivation of guava in Northeast Brazil. The objective of this work was to evaluate the reaction of P. guajava and P. guineense to M. enterolobii infection under greenhouse conditions, with an infection period of 60 days. 12 P. guineense, and 4 P. guajava were evaluated. The host response to the nematode infection was evaluated according to the following parameters: gill index (GI), reproductive factor (RF), and reduction of reproductive factor (RRF). Considering the RRF criteria, the P. guineense genotypes, AR1, AR3, AR4 and AR10 were considered resistant. The RF index was considered inadequate to evaluate resistance in the 60 days period, due the slow development of the parasite in P.guineense.

The Psidium genus, has approximately 150 species, and is mainly known for the species Psidium guajava L., P. cattleyanum Sabine and P. guineense Swartz (Araçá) [1]. P. guajava (Guava) stands out for its great economic importance in several tropical and subtropical countries, and Brazil is one of its major commercial producers [2]. The economic importance of guava cultivation is due to the high nutritional value of its fruits and the various possible forms of consumption, either in natura or as industrialized products [3,4]. Among the species of the Myrtaceae family, P. guajava and P. guineense are the most economically important. Although P. guineense does not share the same importance of Guava, this species is of great interest for research and genetic improvement due to desirable characteristics of its fruits, such as high levels of vitamin C, and also the possible resistance to the plant parasitic nematode Meloidogyne enterolobii, which has been decimating guava orchards [5,6]. This situation is aggravated by the low genetic variability of the Brazilian commercial varieties, where approximately 70% of the orchards are composed by the Paluma cultivar, which is destined for industrialized consumption [7]. M. enterolobii represents a constant danger for cultivated plants. Its rapid dissemination and polyphagic habit, which enables it to live within roots and parasite a large number of species, such as ornamental plants, tobacco, soy, coffee, papaya, acerola, araçá, guava, weeds and various vegetables, make it a difficult plague to control [8-11]. To this date, several studies have been carried out to find genotypes of guava resistant to the infection of root-knot nematodes. Psidium species, such as P. guineense and P. cattleyanum can be a source of resistance, which makes them important for the control of the damages caused by the nematode in question [12-14]. In the various studies aiming at the analysis of M. enterolobii infection on fruit plants, the period between inoculation and root extraction ranged from 60 to 135 days, with 120 days being the most common interval used for this stage [11-13,15], which makes the process of evaluation quite long and costly due to the crop handling costs of the plants. The objective of this work was to evaluate the response of genotypes of P. guinense and P. guajava to the plant parasitic nematode M. enterolobii, in an early manner, with an inoculation period of 60 days.

The present work was conducted in the area of ​​Phytotechnology of the Department of Agronomy of the Universidade Federal Rural de Pernambuco (UFRPE), located at 8°01’92 ‘’S, 34°56’74’’W. Seeds obtained from 12 genotypes of P. guineense from natural ocurring populations in the Pernambuco State-Brazil, 3 P. guajava genotypes obtained from domestic orchards, were planted in expanded polyethylene trays of 16x8 cells, using commercial Basaplant® substrate, alongside the commercial cultivar Paluma as a control for susceptibility. When the seedlings reached 8cm in height, they were transplanted for plastic bags 20cm high and 10cm wide, duly identified for each genotype and conditioned in a greenhouse where they received due cultural treatment, irrigation by sprinkling and nutrient solution. The experimental design was completely randomized, corresponding to the 16 genotypes and 7 replicates. The inoculum of M. enterolobii, yielded by Embrapa Semiarido-CPATSA, was propagated in tomato (Solanum lycopersicum) which is recognized as a good host to M. enterolobii. Eggs extracted from tomato roots were counted from 1 mL samples on photon microscopes and the concentration of the suspension was adjusted to 1000 eggs/mL using distilled water. Soil infestation was carried out 120 days after the planting through application of 5000 eggs per plant, applied in four 2-cm deep holes around the plant stem. After 60 days, plant roots were extracted, we evaluated and passed through the process of nematode extraction according to the protocol of Hussey and Barker [16]. The host behavior in relation to the M. enterolobii infection was evaluated by examining the root system in a stereomicroscope and assessing the gall index (GI) using the International Meloidogyne Project (IMP) scale used by Taylor and Sasser [17]. The host reactions were classified according to the parameters established by Hartman and Sasser [18] according to the scale: 0=absence of galls or mass of eggs, 1=1-2 galls or egg mass, 2=3-10, 3=11-30, 4=31-100 and 5=more than 100 galls or egg mass. Plants that presented values ​​less than or equal to 2 were considered resistant. The estimation of the number of eggs per root system was carried out with the aid of a Peters chamber, under a photonic microscope, obtaining the final population (FP). The reproductive factor (RF), according to Oostenbrink [19], was estimated by the quotient FP/ IP. The reproductive factor was compared by the Scottknott test at 5% probability. Plants with RF <1.0 were considered resistant. The highest value obtained for the variable FR was used as a reference for the calculation of the reduction of the reproductive factor (RRF) according to the methodology of Moura and Régis [20], and classified in the following ranges: 0 to 25=highly susceptible plant; 26 to 50=susceptible plant; 51 to 75=poorly resistant plant; 76 to 95=moderately resistant plant; 96 to 99=resistant plant; 100=immune plant. For the statistical and grouping analysis, FP, FR and GI data were transformed by the square root of X, followed by Scott Knot Analysis by the Assistat Software [21].

During the 60 days of the infection period, the temperatures in the greenhouse varied between 25°C and 35°C. After this period, the presence of galls in the roots of the inoculated plants was observed suggesting that the cycle of reproduction of the pathogen was completed without disturbances. After the infestation period and root extraction each genotype was evaluate to measure their reaction to the parasite. The cultivar Paluma chosen as a control genotype, which was previously reported to be susceptible to M. enterolobii [12-15,22] exhibited the highest value of galls index (GI=2.57).

Among the other genotypes, seven were considered resistant (GI <2) according to this criterion (Table 1). However, observations concerning only the GI, can lead to erroneous classifications, due to its subjectivity and empiricism [23]. Taking into account the mean of the final egg population, five groups were observed, with Paluma cultivar exhibiting the highest average value of eggs (5013.75), and the two most tolerant, AR4 and AR10, with 139.29 eggs. It was observed absence of eggs some plants of genotypes AR1, AR3, AR4 and AR7, totaling six replications where no multiplication was observed. By the analysis of the reproduction factor, all genotypes evaluated, except for the control cultivar, obtained values ​​of FR <1. The calculation of the index of reduction of the reproductive factor (RRF) proposed by Moura and Régis [20], compares the values ​​of RF of each genotype with the FR value of the most affected genotype, allowing an evaluation of susceptibility proportional to the control genotype, and a more precise classification as to the degree of tolerance to phytoparasite. The RRF calculation indicated four individuals as resistant (AR1, AR3, AR4 and AR10). These four genotypes also formed the group that obtained the lowest reproduction factors and final mean population (Group e).

The correlation analysis between the FR and GI variables revealed a positive correlation between the two indices (R=0.54), indicating that there is a trend that genotypes exhibiting high GI values also have high RF values (Figure 1). 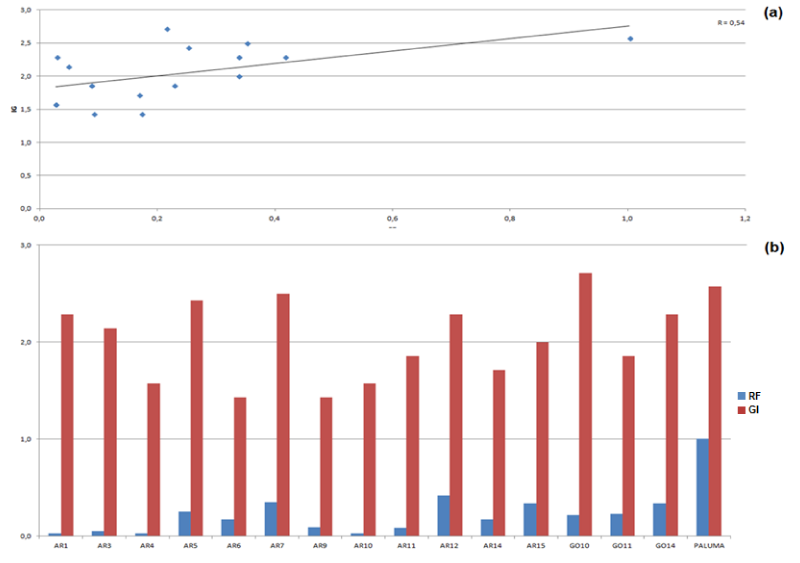 Several studies on the reaction of species of the Psidium genus to M. enterolobii infection demonstrated a variable response among their species to this parasite. While P. cattleyanum, P. myrtoides and P. acutangulum are considered immune or resistant, P. guajava is known to be highly susceptible [12,13,22,24,25].

As observed by Carneiro et al. [26], and Castro et al. [27], the response of P. guineense genotypes evaluated in this study was quite variable, although all were considered resistant according to the reproduction factor. Sousa et al. [15], indicates that the resistance to M. enterolobii, observed for this species is given mainly by a developmental delay and life cycle extension. Thus, the 60-day pathogen infection period used in this study may be insufficient to accurately measure the response of these genotypes, taking into account only this criterion.

Nevertheless, the four genotypes considered resistant by the RRF calculation have great potential for use as grafts to guava trees in infested areas, due the small egg populations found in their roots. New analyzes with longer periods of infection and in field conditions in areas of occurrence of M. enterolobii are still necessary for the confirmation of its resistance, as well as the evaluation of their compatibility as rootstocks for commercial guava trees.

All authors contributed equally to this study.