Copyright License: © 2019 Drijver-Messelink MT, et al. This is an open access article distributed under the Creative Commons Attribution License, which permits unrestricted use, distribution, and reproduction in any medium, provided the original work is properly cited.

Asthma is a highly prevalent airway disease with multiple phenotypes [1,2]. Adult-onset eosinophilic asthma is a severe asthma subtype associated with more frequent and severe exacerbations, the development of persistent airflow limitation and a poorer quality of life. This type of asthma is much more difficult to control than other asthma subtypes, requiring high doses of inhaled or even oral corticosteroids (OCS) [3,4]. Recently, several new monoclonal antibody therapies have been approved for eosinophilic severe asthma, including anti-IL-5 treatment. IL-5 is essential for eosinophilic maturation and survival [5] and anti-IL5 treatment has markedly reduced asthma exacerbations with sparing of OCS use in patients with eosinophilic asthma [6]. Eosinophilic asthma is frequently associated with chronic rhinosinusitis and/or nasal polyposis [7], suggesting that a similar eosinophilic inflammatory process might drive both conditions. Eosinophilic otitis media (EOM) also might fit in this concept, showing remarkable similarities with asthma and nasal polyposis. The disease was first reported in 1994, but only since 2011 diagnostic criteria for EOM were identified. If a patient shows otitis media with effusion or chronic otitis media with eosinophil-dominant effusion (major criterion) and is being positive for ≥2 items of the 4 minor criteria (highly viscous middle ear effusion, resistance to conventional treatment, association with asthma, association with nasal polyposis) he is diagnosed as having EOM. Eosinophilic granulomatosis with polyangiitis and hypereosinophilic syndrome must be excluded [8].

A 50-year-old women suffered from recurrent otitis with hearing loss. She was known with adult-onset non-atopic eosinophilic asthma, for which she regularly visited our severe asthma clinic. Several years ago, her asthma was much uncontrolled, complicated by nasal polyps, and required maintenance OCS treatment. After 2 years, the OCS could be discontinued with acceptable asthma control using high doses ICS and LABA. Several years her asthma was stable without exacerbations and she was relieved being without daily OCS. In the meantime she frequently consulted the ENT-specialist for recurrent bilateral otitis media with viscous glue, resistant to medication and surgical procedures. Despite repeatedly (>4 times) performed myringotomy with tympanostomy tube placement otitis media recurred. A tympanoplasty revealed middle ear secretions and middle ear polyps with prominent eosinophilic inflammation (Figure 1). Unfortunately she also developed severe perceptive hearing loss, requiring hearing aids. 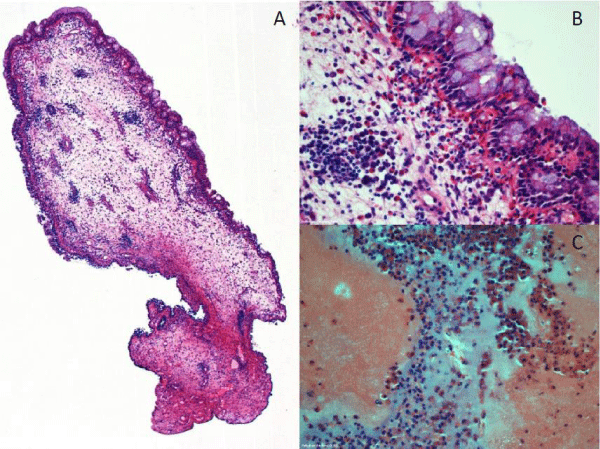 Recurrent otitis media with eosinophil-dominant highly viscous effusion is recently recognised as eosinophilic otitis media (EOM), a distinct middle ear disease associated with asthma and nasal polyposis, at high risk of progressive conductive and perceptive hearing loss that often recurs despite OCS. The eosinophilic inflammation driving her asthma, nasal polyps and EOM suggested a similar underlying pathophysiology that might profit from anti-IL5 therapy, such as mepolizumab. With the EOM with progressive hearing loss as main reason for treatment we started mepolizumab 100 mg sc/ 4wk and evaluated the effects on EOM/hearing loss, nasal polyps and asthma outcomes.

After 8 months of mepolizumab, tympanometry was largely improved whereas otoscopy still showed some fluid in the middle ears. There was an impressive improvement in conductive and perceptive hearing loss (Table 1).

Nasendoscopy showed non-inflamed mucosa with strong reduction of polyps and sinonasal outcome test (SNOT) score improved as well (SNOT 35 to 14). Our patient was delighted with the major improvement in symptoms and the remarkable increase in hearing. Hearing aids were not needed anymore. Asthma control largely improved (Asthma Control Questionnaire score 1.8 to 0.5) as did her quality of life (Asthma Quality of Life Questionnaire score 5.4 to 6.4). Lung function remained stable with normal spirometry and low levels of FeNO (22 to 17 ppb). High levels of blood eosinophils (0.8 x 109/L) disappeared to <0.1 x 109/L, as expected. After 16 months of mepolizumab there was no relapse of EOM or nasal polyps and her asthma was stable.

Eosinophilic otitis media (EOM) is a middle ear disease characterized by the accumulation of eosinophils in middle ear mucosa and middle ear effusion. These eosinophils undergo cytolysis and pour out approximately 200 granules per cell, including highly cationic proteins which are directly toxic to pathogens but also to the tissue. High levels of eosinophil granule proteins in the middle ear effusion appear to cause epithelial damage and decrease mucus transport in the Eustachian tube [9]. Patient with EOM suffer from recurrent highly viscous middle ear effusions and are at high risk of progressive perceptive hearing loss. Standard treatment is instillation of topical steroids into the middle ear or systemic corticosteroids. Although these are generally effective in inducing EOM remission, unfortunately, recurrence or refractory disease often occur [9].

The mechanism of accumulation of eosinophils in the middle ear has not yet been clarified. However, there are findings indicating that active eosinophilic inflammation occurs locally in the middle ear: eosinophil chemoattractants such as IL-5 and eotaxin have been detected in middle ear effusion [8].

The role of anti-IL-5 therapy in reducing airway inflammation and blood eosinophilia has been demonstrated in earlier asthma studies [6]. It could be expected that anti-IL5 treatment would have the same effect on local eosinophilic inflammation in the middle ear.

This case shows the success of a response to anti-IL-5 in EOM. There was an impressive beneficial effect on hearing capacity and severity of otitis as well as on her asthma outcomes. Even though this is only one unique case, the findings point towards a shared pathophysiology of eosinophilic otitis media and eosinophilic asthma with clinical consequences.

Eosinophilic otitis media may severely influence QOL in patients with eosinophilic asthma. We describe a positive effect of anti-IL5 on EOM, combined with improvements in nasal polyps and asthma outcomes. It suggests that EOM and nasal polyps share a common underlying pathophysiology with (subsets of) eosinophilic asthma, and might be considered as a broadening of the spectrum of the disease. This should stimulate pulmonologists to ask for co-existing nasal problems, hearing loss and recurrent otitis, in particular in patients with eosinophilic asthma, and to collaborate with ENT-specialists in finding underlying common mechanisms and best treatment options.