Copyright License: © 2019 Kalach Mussali AJ, et al. This is an open access article distributed under the Creative Commons Attribution License, which permits unrestricted use, distribution, and reproduction in any medium, provided the original work is properly cited.

Several articles have discussed mandibular condyle position after bilateral sagittal split osteotomies (BSSO). However, previous studies have sought to establish a relationship between orthognathic surgery and the improvement of temporomandibular joint (TMJ) signs and symptoms. Also, they have been limited to two-dimensional evaluation of condylar position considering only the condylar “sag” or improper inferior seating of the condyle. The purpose of this study was to investigate a relationship between changes in condylar position using three-dimensional computed tomography and the negative clinical impact of BSSO on the temporomandibular joint.

Dentofacial deformities can be defined as significant deviations from normal proportions of the maxillo-mandibular complex that also negatively affect the relationship of the teeth within each arch and the relationship of the arches with one another (occlusion). These deformities may be minimal, such as a slight projection of the chin, or extreme, such as a severe vertical maxillary excess or hemifacial microsomia [1]. This condition may be evident at birth or appear during growth and development, creating functional, degenerative, aesthetic and psychosocial problems [2]. Serious problems of dental and skeletal malocclusion require combined treatment with orthodontics and orthognathic surgery, intending to achieve facial, dental and functional harmony [3].

Surgery to reposition the jaws (i.e., an orthognathic procedure) as part of an interdisciplinary approach is often recommended to manage the related skeletal, dental, and soft-tissue dysfunctions and concerns [4]. Orthognathic surgery is a treatment option that provides stability, function and aesthetics [5].

The most common orthognathic procedure is a bilateral sagittal split osteotomy to advance the mandible in cases of mandibular deficiency [6]. Mandibular advancement, setback and rotation have an effect and change in mandibular topography and its relationships [5]. Some patients with preoperative symptoms have an improvement after surgical correction, but for some patients the symptoms may change for the worse [7,8].

A population of 47 patients who underwent BSSO in the Maxillofacial / Plastic & Reconstructive Surgery Department in ISSEMyM Medical Center were studied retrospectively. All of the patients had preoperative orthodontics and they were operated between December 2012 and January 2016. During preoperative and postoperative examination, Helkimo’s Anamnestic and Dysfunction Index (HADI) [11], were determined. Three-dimensional computed tomography were acquired with 1.0mm-thick slices using a Siemens SOMATOM Emotion scanner, data acquisition occurred in the preoperative surgical planning and >6 months postoperatively for both the Helkimo’s Anamnestic and Dysfunction Index and tomographic measurements using Pullinger & Hollender modified by Pereira method (P&HmP) [12]. (to determine antero-posterior condylar displacement) and determination of condylar rotation as seen in figure 1 (ConRot) (determined in the axial plane parallel to Frankfort’s plane, tracing a line between the anterior and posterior nasal spine determining the midsagittal plane; and a line on the mayor condylar axis, resulting in an angle) [13,14]. 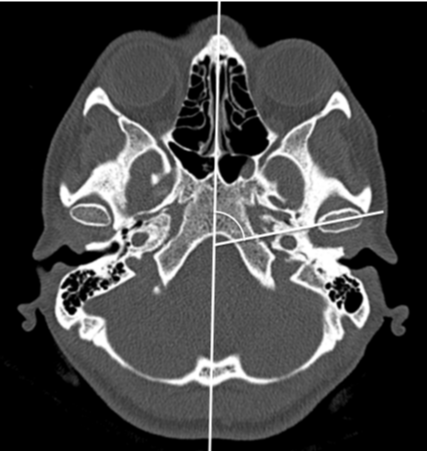 Statistical analysis was performed using SPSS 24.0 software measuring Pearson’s correlation coefficient to establish a relationship between tomographic measurements and Helkimo’s Anamnestic and Dysfunction Index in the preoperative and postoperative setting.

This study received approval from the institutional review of boards and ethics committee approval. 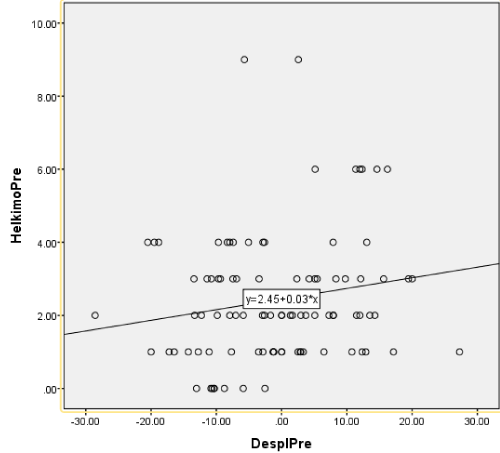 Figure 2: A weak correlation was found between condylar displacement (P&HmP) and HADI with a Pearson’s correlation coefficient of 0.175 (p=0.091). 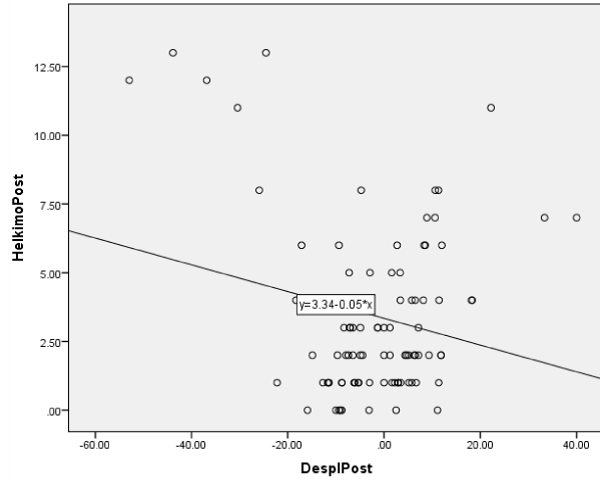 Figure 3: Nor condylar rotation and HADI with a Pearson’s correlation coefficient of 0.158 (p=0.129)

During the postoperative period, patients with a posterior mandibular condyle displacement in the temporomandibular joint showed a higher HADI score, proving a strong Pearson’s correlation coefficient with a score of -0.217 (p<0.036) as seen in figure 4. 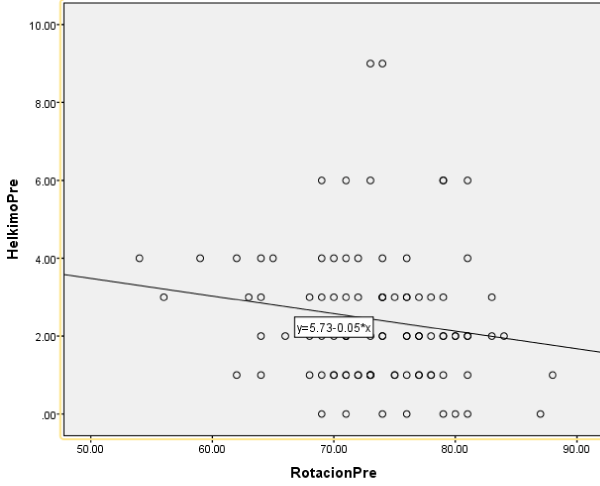 Figure 4: A posterior mandibular condyle displacement in the temporomandibular joint showed a higher HADI score, proving a strong Pearson’s correlation coefficient with a score of -0.217 (p<0.036).

A stronger Pearson’s correlation coefficient was found between mandibular condyle rotation (ConRot) and HADI -0.367 (p<0.01) as seen in figure 5. 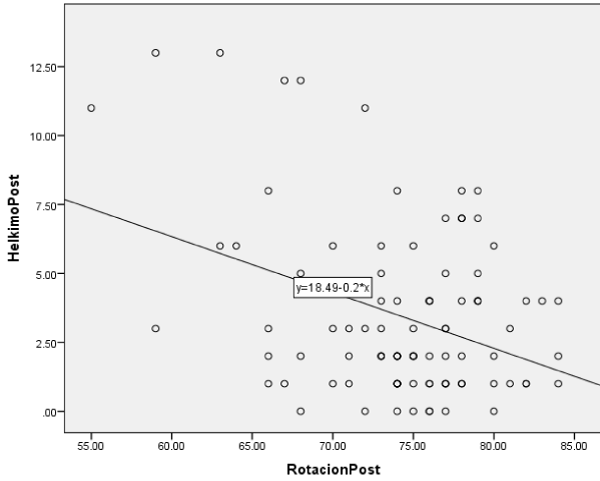 No association could be found between HADI and anterior condyle displacement measured with P&HmP or with lateral condylar rotation (ConRot).

The main goal of most patients who undergo bilateral sagittal split osteotomies is to achieve a better aesthetic facial result. During examination and planning, it’s fundamental to perform cephalometric measurements for an adequate prediction of final results and prevent causing evident clinical dysfunction. Orthognathic surgery displaces and modifies mandibular topography in planned predictable sites for which surgery is intended, but secondarily disturbs the anatomy of the mandibular condyle causing clinical dysfunction in the temporomandibular joint [5]. Surgery also changes the facial osseous and muscle / soft tissue balance) which will elicit signs and symptoms observed and described in HADI [11].

In the tomographic sagittal plane, antero-posterior displacement of the mandibular condyle is observed after BSSO, for which Pullinger & Hollender designed a measuring method to establish a condylar relationship with the temporomandibular joint [15]. Later Pereira modified this method in which he did the same measurements using a resting position centered bite instead of a maximal intercuspation bite [12]. In the tomographic axial plane rotational condylar movements are observed after surgery despite of condylar transoperative repositioning, most condylar position studies have omitted this measurement and have measured the condyle bi-dimensionally only. Also in the axial tomographic plane lateromedial condylar movements and “sag” can be observed, but have been negligible during postoperative clinical examination [8,16].

Other studies have focused on remodeling and displacement of the mandibular condyles, and established this changes as a physiological adaptation process of the TMJ, allowing major consequences related to occlusion to be avoided. Sometimes the adaptive capacity of the joint is exceeded, leading to the onset of a resorption process of the condyle, characterized by bone remodeling with a negative balance in the volume of the condyle [17]. These studies have shown no correlation between changes in condylar volume and joint spaces. Therefore, changes in joint spaces are more likely to be related to factors other than remodeling, such as condylar displacement. Superior, posterior and medial joint spaces are reduced after orthognathic surgery, changes not related to the amount of the mandibular advancement that could possibly relate to TMJ dysfunction. However the measurements were performed in 2-D examinations, making it impossible to evaluate medial-lateral and rotational alterations [18-20].

In this study we observed that posterior displacement and medial condylar rotation are the most representative and valuable, since they will evoke a negative clinical impact in BSSO patients [21]. Despite the latter, this study could not establish a movement prediction method for the mandibular condyle. Follow-up examinations after at least 6 months, allowing symptoms that could be related directly to the postsurgical recovery period, showed that even with a protocolized technique, a broad range of displacement and rotation of the condyles was observed.

Also, the aim of this study was to establish a relationship between condylar displacement/rotation and the clinical dysfunction index after BSSO, thus other variables such as fixation method, type of fixation, osteosynthesis material position and distribution, osteotomy types, association to bimaxillary surgery, and others were not considered, and could be subject to future studies as they could also modify the position of the mandibular condyles after surgery.

This study could not establish a quantitative relationship between condylar displacements and the presentation of signs and symptoms in the orthognathic surgery patient. Mandibular advancement, setback or rotation planned in cephalometry are predictable and reproducible, but condylar displacements secondary to these are not, being influenced also by masticatory muscles and soft tissue, that after changing position are subject to elongation and compression forces evoking signs and symptoms, sometimes worsening the dysfunction of the patients.