Copyright License: © 2019 Ma M, et al. This is an open access article distributed under the Creative Commons Attribution License, which permits unrestricted use, distribution, and reproduction in any medium, provided the original work is properly cited.

We report a case involving infection with Strongyloides stercoralis found in the sputum of a 66-year-old male patient who had a medical history of nephrotic syndrome and was treated with methylprednisolone and monthly intravenous cyclophosphamide therapy 3 months previously. This patient presented with stubborn pulmonary symptoms and signs, which was the mechanical destruction caused by larval migration. We found strongyloides in his sputum that provided diagnostic proof.

Worldwide, approximately 300-400 million people are infected with strongyloidiasis. This parasite is mainly prevalent in the tropics and subtropics, but also in countries with temperate climates [1]. Strongyloides stercoralis (S. stercoralis) is a facultative parasite. Adult worms live in the host’s small intestine, such as humans, cats, dogs, etc. The larvae can invade the liver, brain, lung, and kidney, as well as other organs, causing strongyloidiasis. Most patients with S. stercoralis infection has no symptom. When the patients suffered blow conditions, they will have more chance to get infection, including use immunosuppressive medication, altered cellular immunity, Organ transplantation, hematologic malignant disease, human immunodeficiency virus, malnutrition states, diabetes mellitus, rheumatoid arthritis, and chronic alcohol consumption. In these patients, S. stercoralis can lead to hyper infection syndrome and disseminated disease, if not recognized and treated aggressively, which can associate with a high mortality rate. Pulmonary strongyloidiasis is one of the most important signs of disseminated strongyloidiasis in immunosuppressed patients [2].

S. stercoralis has 2 important stages in the life cycle, namely, rhabditiform and filariform. In the rhabditiform stage, S. stercoralis lays eggs that hatch into larvae in the duodenum. In the filarial stage, larvae in contaminated soil enter the human skin and then transported to the lungs, where they were carried through the bronchial tree to the pharynx, and then reach the small intestine [3]. Infective S. stercoralis larvae can replicate in the bowel and directly auto infect positive individuals-autoinfection allows it to survive in a human host for many years [4]. Without appropriate therapy, the infection does not resolve and may persist for life.

A 66-year-old male had a 6-month history of edema. Two weeks before, he presented with cough, usually accompanied with blood-tinged sputum. He had a poor appetite, fatigue, abdominal distension and an obvious weight loss, but without fever, chills, night sweats, or chest pain, and he don’t have shortness of breath. Past medical history included hypertension and gout, and he had no specific history of tuberculosis. He was well until 6 months before admission, when he was admitted to our hospital due to nephrotic range proteinuria. Laboratory data showed large amounts of proteinuria (measurement of urinary protein in random urine samples up to3+), and severe hypoalbuminemia (serum albumin,1.31g/dl). The serum creatinine level was high (1.64mg/dl) on admission. Kidney biopsy had been performed at that time. The diffusely thickened basement membrane was seen with global sclerosis in 3 out of 18 glomeruli. Amounts of subepithelial immunoglobulin-containing deposits also was seen along the glomerular basement membrane (GBM). Tubular atrophy and proportional interstitial fibrosis were seen in 15% of submitted tissue surface. Immunofluorescence (2 glomeruli studied) revealed 3+ IgG deposition, mainly along glomerular capillary. The diagnosis of idiopathic membranous nephropathy was made (Figure 1).

He was treated with methylprednisolone 40 mg daily and cyclophosphamide 1.0g monthly. However, the treatment effect was not ideal, he had no responded to a 3-month course of therapy. He was originally a resident of Guangdong Province. In his past medical history, there was no positive finding or symptoms of StrS infection, although specific examination for Strs was not performed. On admission, he had an increased C-reactive protein level of 110 (normal, <10) mg/L, a white blood cell count of 11.34 (normal, 4.0-10.0) ×109/L, a neutrophil percentage of 90.6% (normal, 50-70%), and an erythrocyte sedimentation rate of 96 (normal, <15) mm/h but had a decreased eosinophil percentage of 0.1% (normal, 0.5-5%). Coagulation-related tests and his platelet count were normal; therefore, hemoptysis caused by coagulation dysfunction was not considered. Tuberculosis and heart failure were excluded with a related examination. There was no apparent evidence of lung cancer or bronchiectasia in the X-ray test. To our surprise, the larvae of S. stercoralis were found in a routine sputum smear slide (Figure 2). The larvae were also found in his feces and gastric juice. On eighth hospital day, his general condition deteriorated rapidly, and the patient developed dyspnea. A chest X-ray scan demonstrated diffuse alveolar infiltrates (Figure 3). He was sent to the intensive care unit due to worsening dyspnea and acute respiratory failure. The treatment was started with albendazole combined with ivermectin immediately, unfortunately the patient died soon after, with progressing dyspnea, intractable hypoxemia and respiratory failure, on the fifth hospital day and only 5 days after the diagnosis of S. stercoralis. After the discussion by nephrologists and ICU physicians, to our opinion the cause of the patient’s death was considered as ARDS (Acute respiratory distress syndrome, ARDS) caused by severe nematode infection and multiple organ failure. Moreover, the massive disintegrating of S. stercoralis after antiparasitic drugs treatment may induce fatal hypersensitivity reaction. Due to the traditional Chinese culture, the patient’s family member refused to perform autopsies, so we couldn’t get clarify diagnosis. 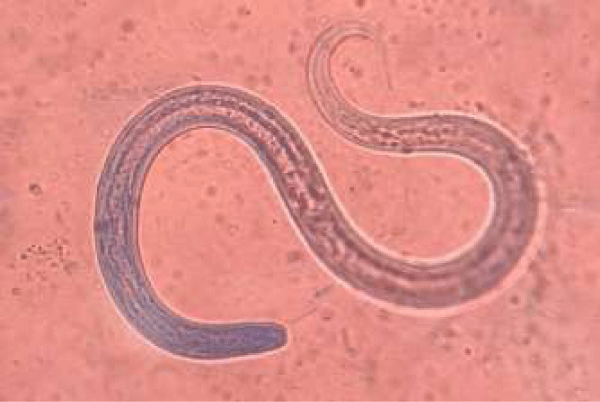 Strongyloidiasis is an infection caused by S. stercoralis. It is an endemic disease in tropical and subtropical areas in the world. In China, it is also an endemic parasite in southern especially in Yunnan province. Steinmann P and colleagues in China reported a prevalence of 11.7% in southern Yunnan Province, China [5]. Because of common, good sanitary conditions, we used to ignore parasites as a source of infection.

Clinical symptoms of the infection can range from asymptomatic eosinophilia to systemic disseminated disease when immunosuppression is practiced. Diagnosis of dormant infection is difficult due to limitations of current parasitological detection system. Defects in cell-mediated immunity and corticosteroid use are considered the major risk factors for development of Strongyloides hyperinfection in immunocompromised hosts [6]. A total of 19 cases of disseminated S. stercoralis-associated glomerular diseases have been reported [7]. But in china, there are few reports of Strongyloides hyperinfection syndrome. Physicians usually consider symptoms that persist after corticosteroid or immunosuppressive therapy attributable to the sensitivity of the drug. This case reminds us to consider infection with S. stercoralis.

The mortality rate for disseminated strongyloidiasis is as high as 86% among compromised hosts [9]. Corticosteroid treatment in such cases can predispose to the development of hyperinfection syndrome possibly by steroid-induced suppression of eosinophil and lymphocyte activation. Thus, early detection of underlying S. stercoralis infections in such individuals is extremely important, as disseminated strongyloidiasis is potentially fatal.

Grover et al. reported a case of S. stercoralis infection syndrome in a patient underwent orthotopic heart transplantation. That patient had a significant increase in peripheral eosinophilic cells (up to 20%) serval months before transplantation which provide clues for the diagnosis of parasitic infection. In our case, we retrospectively checked the patient’s peripheral blood before the use of hormones and immunosuppressants, but we found no significative about blood eosinophils.

The diagnosis of S. stercoralis infection is difficult, owing to the limitation of check method. The sensitivity of parasite detection in fecal routine is pretty low, and continuous detection of two or more specimens is needed to increase the detection rate. The new luciferase immunoprecipitation method has improved the sensitivity and specificity of monitoring S. stercoralis, but this method couldn’t distinguish past or present infections, so it cannot be widely used.

In conclusion, this case reminds us of the possibility of infection with S. stercoralis in immunosuppressed patients. We also recommend that a normal or reduced eosinophil count does not exclude a parasitic infection. Early detection of a potential parasitic infection is important, as disseminated strongyloidiasis is potentially fatal.

This work was supported by grants from the Science and Technology planning Project of Guangzhou City, China, with grant number: 201604020175.

Mingming Ma wrote the manuscript. Shuang Cui,Ting Luo edited the manuscript. Zhanhua Chen, Xiangnan Dong, Sibo Huang provided pathological pictures.Lianghong Yin is the guarantor of this work and take responsibility for the integrity of the data. All authors declared no conflict of interest.