Copyright License: © 2018 Asif S, et al. This is an open access article distributed under the Creative Commons Attribution License, which permits unrestricted use, distribution, and reproduction in any medium, provided the original work is properly cited.

Posterior reversible encephalopathy syndrome (PRES) is a neurological syndrome with clinical features of altered sensorium, headaches, visual problems and seizures. It has been associated with uncontrolled hypertension (HTN), thrombotic thrombocytopenic purpura (TTP) and immunosuppressive drugs. Rituximab has also been implicated as a cause of PRES that usually occurs after the first dose. We report a case of PRES that occurred after the second dose of Rituximab. A twenty three years old female known case of resistant TTP treated with multiple courses of steroids and plasmapharesis was admitted with renal failure, severe volume overload ad lower respiratory tract infection. She was treated with hemodialysis, intravenous antibiotics, steroids and plasma exchange (PEX). She did not responded and due to worsening thrombocytopenia and persistent hemolysis was administered Rituximab as an adjunct therapy. She tolerated the first dose well, however 48 hours after the second dose she developed uncontrolled HTN of 190/110 associated with generalized tonic clonic seizures and altered sensorium requiring intubation and mechanical ventilation. MRI findings were suggestive of PRES. Seizures did not get controlled with conventional therapy and patient underwent two consecutive cycles of PEX to remove the drug which resolved the seizures.

Posterior reversible encephalopathy syndrome (PRES) was first reported by Hinchey et al. 1996 [1], and has an unclear pathophysiology. It is a syndrome that presents with neurologic symptoms of headaches, seizures, visual problems and altered sensorium [2], along with uncontrolled hypertension. The syndrome has been associated with use of immunosuppressive agents [3], preeclampsia and renal disease. Diagnosis is established by MRI that shows bilateral symmetric areas of vasogenic edema of white matter, predominantly involving occipital and posterior parietal lobes.

Rituximab (anti CD 20 monoclonal antibody) is used for treatment of resistant Thrombotic Thrombocytopenic Purpura, autoimmune disease and haematological malignancies. Case reports have shown association of Rituximab with PRES after first dose. We report this case of PRES that occurred after second dose of Rituximab.

A 23 year old female, diagnosed as a case of Thrombotic Thrombocytopenic Purpura one year ago and hypertension, was shifted from another hospital on 5th August 2017, with history of shortness of breath, decreased urinary output and anasarca. Previously, she had history of joint pains, hair loss and one abortion, but work-up for systemic lupus erythmatosis was negative. She had been treated with intravenous methylprednisolone and multiple sessions of plasmapheresis.

Patient was desaturating on room air when she presented to our hospital, had anasarca and bilateral crepitations in the chest till midzone. Rest of the examination was unremarkable. Laboratory findings included deranged urea of 248mg/dl, creatinine 2.2 mg/dl, low platelets 28,000, anemia with Hb of 9.7, raised LDH and high total leucocyte count 30,000 with predominant neutrophils. Her coagulation profile was normal and repeat ANA Anti DSDNA C3 C4 were also negative. She was managed on the line of pneumonia, volume overload, renal failure and active TTP. Her infection was managed with intravenous meropenem. Intravenous methylprednisolone was continued; three sessions of plasmapheresis were done and haemodialysis was performed for resistant volume overload. Patient’s thrombocytopenia worsened and hemolysis continued requiring PRBC transfusions.

Considering her as a case of refractory TTP and with Hematology input, 700mg (that is 375 mg/m2) Rituximab was administered. Meanwhile, she started making good urinary output and her renal function improved, but her bicytopenia persisted. Three more sessions of plasmapheresis were performed and intravenous methylprednisolone was continued.

After one week, second dose of rituximab was administered. Forty-eight hours later, the patient developed generalised tonic-clonic seizures. Her blood pressure had increased to 190/100 mmHg. She was loaded with 1 gram levetiracetam, intravenously, which was then continued at a dose of 500mg bid. The patient then developed four more episodes of generalised tonic-clonic seizures over the next five hours and her GCS deteriorated. Besides low GCS, rest of her neurological examination was unremarkable with no focal neurological deficit. She was electively intubated, and taken on midazolam and propofol infusion. Intravenous labetalol infusion and intermittent hydralazine were started to stabilise her blood pressures, as there was a high suspicion of PRES.

MRI of brain was done that showed bilateral symmetric high intensity signal areas, predominantly involving cortices of fronto-parietal and temporo-occipital lobes with involvement of subcortical white matter in both posterior parieto-occipital lobes and a small one in brain stem, well appreciated on T2 and FLAIR images. These areas appeared isointense to hypointense on T1W image, not showing restriction on DWI, findings being compatible with posterior reversible encephalopathy syndrome (Figure 1). 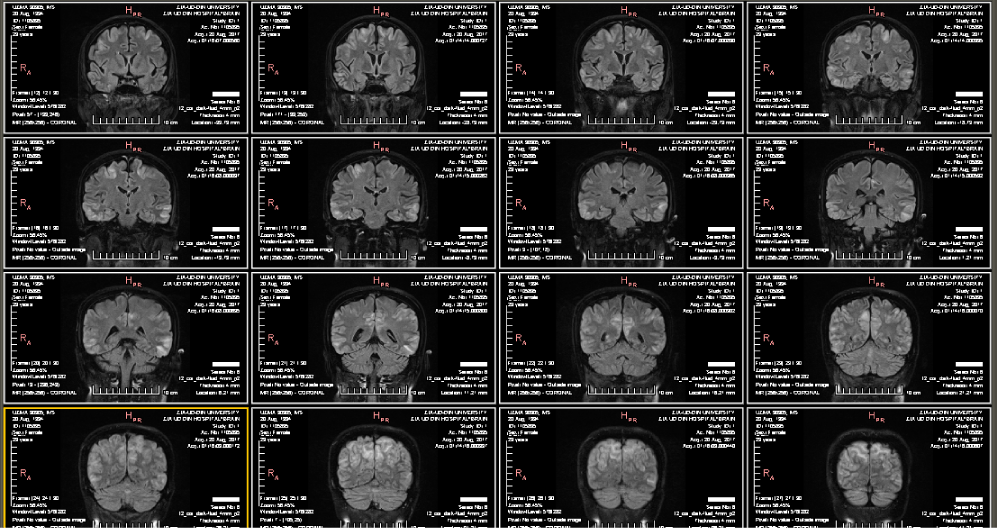 Oral antihypertensives were added to the treatment, and her blood pressure was controlled, but she did not become seizure-free, and her GCS did not improve. Two sessions of plasmapheresis were performed in the following days, after which, her seizures were controlled. During this time, the patient had developed ventilator-associated pneumonia and severe sepsis, for which colomycin was added. Meanwhile, her family reversed the code to DNR and requested to extubate her, which when done, led to death of the patient within six hours.

Posterior reversible encephalopathy syndrome is manifested by non-specific neurological symptoms associated with characteristic radiologic findings [2]. It has been reported in patients of all age groups and is mostly associated with hypertension (with a mean systolic pressure of 187 mmHg), though the level does not correlate with the severity of symptoms of PRES [2]. Besides hypertension, pre-eclapmsia, eclampsia, sepsis [3], thrombocytopenic thrombotic purpura [4], use of immunosuppressive drugs (most commonly cyclosporine and tacrolimus), cytotoxic agents and many other drugs are also associated with PRES [5].

Having unknown pathophysiology, two main mechanisms have been hypothesized. One suggests that impaired cerebral autoregulation, at high blood pressure, causes increased cerebral blood flow. The other describes endothelial dysfunction with cerebral hypoperfusion that is associated with cytotoxic agents. The result of perfusion abnormalities in both the above mechanisms is blood-brain barrier dysfunction that causes cerebral vasogenic oedema [2,3,5].

There are no pathognomonic clinical features of PRES but it can present with various neurological symptoms that include altered level of consciousness (ranging from confusion to coma), seizure activity, focal neurological signs, visual abnormalities, headache, nausea and vomiting [2,5,6]. The diagnosis is confirmed by radiological findings of bilateral and symmetric regions of oedema in the white matter, predominantly involving the posterior and occipital lobes, though occasionally it is seen involving the frontal lobe, temporal lobe, basal ganglia, cerebellum and brainstem; and cortex, instead of the white matter. The key modality for diagnosis is cerebral MRI, in which oedema is indicated by regions of hyperintense signals in T2-weighted images [2]. FLAIR images also visualise the lesion. It can be complicated by cerebral ischemia and hemorrhage [2]. Treatment includes tight control of blood pressure and seizures, holding the responsible drug, and plasmapheresis in cases associated with TTP [2,4].

In the case presented in this report, PRES occurred forty-eight hours after the second dose of rituximab. Although PRES is seen to have been associated with hypertension and TTP, in our case patient had had TTP for one year, but PRES only occurred after administration of rituximab, which favours rituximab as being the causative factor. Secondly, although our patient had uncontrolled pressures at the time of onset of symptoms, her symptoms did not resolve after adequate blood pressure control, which further supports the association of PRES with rituximab in this case. Treatment of PRES caused by rituximab, includes removal of the drug by plasmapheresis [10], which in our case, improved the symptoms of our patient. Thus, this case, like the various cases reported previously, shows a clear association of rituximab with PRES.