Copyright License: © 2017 Herrera JA, et al. This is an open access article distributed under the Creative Commons Attribution License, which permits unrestricted use, distribution, and reproduction in any medium, provided the original work is properly cited.

Purpose: The aim of this study is to evaluate the relationship between the levels of biopterins with albuminuria in type-2 diabetic hypertensive patients.

Conclusion: Our results suggest that the BH4/BH2 ratio instead of biopterins levels may be a marker of nephropathy in hypertensive type-2 diabetic patients.

Diabetic nephropathy (DN) is the most common cause of chronic kidney disease (CKD) worldwide; DN is also an important cause of premature mortality in diabetic patients [1].

Tetrahydrobiopterin (BH4) is an essential cofactor for the nitric oxide synthase (eNOS) regulation, this cofactor have an important role in regulating nitric oxide (NO) and superoxide production by eNOS; When the bioavailability of BH4 for eNOS is reduced, due to a decrease in the synthesis of the cofactor or because it is oxidized to dihydrobiopterin (BH2), electron transfer from eNOS becomes uncoupled from L-arginine oxidation, and the enzyme produces superoxide instead of NO, leading to endothelial dysfunction [3]. Recent studies show that BH4/BH2 ratio may be even more important than the absolute BH4 levels for an adequate nitric oxide mediated endothelial function [4].

This study was conducted to evaluate whether circulating biopterin levels are correlated with albuminuria in hypertensive type-2 diabetic patients.

A total of 30 hypertensive patients with type-2 diabetes mellitus with more than 12 months’ from the diagnosis, and without previous treatment with thiazolindinediones, statins, GLP-1 analogues, or ACE inhibitors, nor with angiotensin receptor antagonists, were included.

To avoid influence of physical activity level on albuminuria, patients were recommended not to perform exercise in the 3 days before urine recollection.

In all of them, BH4 and BH2 were measured by reverse phase high performance liquid chromatography with fluorescence detection. All venous samples were collected in the morning after a 12-h overnight fast, and fasting glycemia (glycose oxidase) and HbA1c were measured from those samples. Twenty-four-hour urinary albumin excretion (nephelometry) was also performed.

The study was conducted with the approval of the Research and Medical Ethics Committee of our hospital, in accordance with the Helsinki declaration. Participants gave informed, written consent before their inclusion in the study protocol.

Data are presented as the mean ± standard deviation. The relationship between circulating biopterin levels and 24 h albumin excretion was assessed by Pearson’s correlation coefficient. 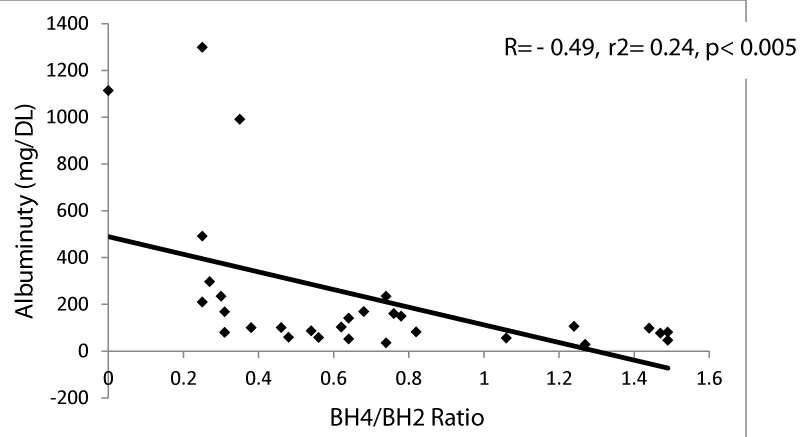 Figure 1: Correlation between the bh4/bh2 ratios and urinary albumin excretion.

In the current study we investigated whether circulating levels of BH4 and BH2 were associated with albuminuria in hypertensive type-2 diabetic patients, although we failed to find any correlation between both biopterins and urinary albumin excretion, we found a significantly association for the BH4/BH2 ratio with albuminuria . It is important to say that in our work; our patients were ACE/ARB-naïve and statin-naïve because those drugs have been shown to raise circulating levels of BH4 and to decrease those of BH2 [3].

Plasma levels of biopterins reflect their endothelial levels, BH4 has been implicated in the regulation of endothelial function, when oxidative stress is increased in the endothelial cell, BH4 is oxidized to dihydrobiopterin, and this fact favors eNOS uncoupling, under those conditions, molecular oxygen is reduced to form superoxide, leading to endothelial dysfunction [5]. Then; an inverse relation between BH4 and albuminuria is expected, although in our study did not reach significance [4].

Inflammation induced by endothelial dysfunction plays an important role in the development of albuminuria in diabetic patients [8], however, for the first time, the current study demonstrated a significant relationship between the BH4/BH2 ratios (but not biopterin levels) with albuminuria. As this ratio includes information about the levels of both biopterins, may be a more sensitive and reliable marker of endothelial dysfunction and glomerular injury than the isolate values of BH4 or BH2 [9]. Our results appeared to support this idea, since this ratio had an inverse correlation with urinary albumin excretion in our patients.

Our results may have therapeutic implication, the beneficial effects of inhibitors of the renin-angiotensin system and statins to ameliorate renal damage may be due, at least in part, with their effect on endothelial function. In addition, BH4 may be used as a therapeutic option, since BH4 restores endothelial function and reduces the production of superoxide in type 2 diabetic patients, via a nitric oxide pathway in short studies [9].

Our data suggest that the BH4/BH2 ratio, (but not biopterin levels) is associated with albuminuria in type 2 diabetic normotensive patients. This explains, at least in part, the mechanisms that join type-2 diabetes mellitus, oxidative stress, endothelial dysfunction, inflammation, and diabetic kidney damage.