Copyright: Hagisso SN, et al. This is an open access article distributed under the Creative Commons Attribution License, which permits unrestricted use, distribution, and reproduction in any medium, provided the original work is properly cited.

Background: Premarital sexual practice significantly attributes for increase adolescent’s risk of unintended pregnancy, early marriage, abortion and STIs. In Ethiopia adolescents were intended to engage at early initiation to sexual intercourse without having proper protection has been one of the concerns. Study aimed to assess the prevalence of premarital sexual practice and associated factors among high school students.

Conclusion: Drinking alcohol, watching pornography and mother education were predominantly significantly associated. Therefore, an integrated effort needs to be highlighted to deter the health behavioral problems of school adolescents at the early stages.

World Health Organization (WHO) defines adolescent people as those between the ages of 10-19 years [1]. Adolescent is the time of transition from childhood to adult hood during which young people experiencing following puberty and human beings faced once in their life time [2]. The world today is experiencing a rapid increasing in the number of young people. Today adolescents constitute approximately one-fifth of the world’s population with more than four-fifth in developing countries [3].

According to Ethiopian demographic and health survey (EDHS), 2011, 1.5% of Ethiopian adults age 15-49 are infected with HIV and the number of women age 15-19 years who tested positive for HIV is much higher than the number of males in the same age group which is due to early sexual initiation among young females and having multiple sexual partner [4].

In Ethiopia, an increasingly large number of adolescents are enrolled in preparatory schools. Early initiation to sexual intercourse without having proper protection has been one of the concerns. Adolescents often encounter high-risk situations, such as contracting STD/HIV/AIDS and often experience unintended pregnancy, illicit abortions and its negative sequel. Both female and male adolescents are usually curious to discover sexes which are usually unprotected [6].

Another study done among Ambo high school students revealed that 30.5% of sexually active female students had got pregnant at least once prior to the study out of which 66.7% reported history of abortion and from sexually active male respondents 15.94% were also impregnated at least once prior to that assessment. The existing literatures also document that adolescents engage in pre-marital sex with insufficient knowledge of reproductive health and the proportion of pre-marital sex is higher among older age groups than younger age groups [7]. Different studies conducted in Ethiopia identified inconsistent factors of sexual practice. Thus, this study tries to assess prevalence of pre-marital sexual practice and factors associated with it among Goba town high school students.

A facility based cross-sectional study was carried out in Goba town (Negade and Finca Bamo high school), Bale zone, south east Ethiopia from June1 to June 30, 2018. The students who attended during the study period were selected as participants that were specifically ensure the inclusion criteria.

The sample size for this study was determined using single population proportion formula: assuming, 95% confidence interval (CI), 5% margin of error (d), 10% Non-response rate and P = By taking 28.3% of prevalence of premarital sexual practice that were conducted in Sebata secondary school [8]. Therefore, the determined sample size by considering 5% contingency was 343. Since the total population was < 10,000 this might needs the correction formula then the final sample size was 291. During the study consultation with high school administration was made to obtained details of classes and respective numbers of students in the school. A Simple random sampling technique was used and the sample size allocated proportionally to 9th and 10th grade students.

Structured, pretested and self-administer questionnaire Oromia version questionnaires were used to collect the data adapted from different literatures. The questionnaire incorporates student information of, socio demographic characteristic, sexual history of the respondent and associated factors were major factors that contributed for the involvement of the respondents into premarital sexual activity. The principal investigator was coordinating the overall activity of the study.

Data coded and entered into a computer using Epi info version 7.2.0.1 and checked for completeness and transferred to SPSS version 20 for analysis. During the process of statistics analysis like frequencies, percentage, pie chart, table and mean computed. Bi-variate logistic regression used to identify variables that crudely associated and variables with p-values less than or equal to 0.05 fitted to multiple logistic regression. Then association between dependent and independent variables was assessed using adjusted odds ratio (AOR), 95% CI and p value of <0.05 considered statistically significant.

Premarital sexual practice: in this study refers to penetration of males’ penis into vagina.

Premarital sex: refers to sexual practice with any one before the marriage between has been launched.

Before data collection procedure, letter of permission was obtained from Madda Wallabu University Research and Community Service Directorate and verbal consent was taken from the study subjects. The respondent right and dignity was also respected in order to keep confidentiality of each respondents’ name was not included.

Two hundred sixty respondents aged between 15-19 years were participated yielding a response rate of 276 (94.9%). One hundred fifty eight (57.2%) of the respondents were males. Regarding education, majority of the respondents were from grade nine (66.7%). Similarly the followers of orthodox Christianity were (43.5%), were followed by Muslims (36.2%) and (2.5%) were other (wakifeta, hawariat).

The most predominant ethnic group was Oromo (75.7%). Majority of the respondents (95.3%) were unmarried. Regarding place of residence more than half (72.5%) were from urban. Regarding educational status of father, most of them were (43.1%) completed primary and secondary school, whereas (33.7%) attained college/university respectively. Regarding, educational level of mother, majority of them were attained primary and secondary (35.1%), and (32.2%) can read and write. Monthly income of most of the study subjects’ family ranges from >2000 Birr which accounts (37.7%).

Sexual history of the participants

Most of the participants should initiate for sexual intercourse due to love; this accounted (39.5%) from the mentioned reasons, to get money, with forces, individual desire and due to substance abuse. From the total participants engaged in premarital sexual practice, almost nearly half (33.7%) had a regular sexual partner during a data collection period. More than half (66.3%) have had sex with more than one sexual partner.

Regarding safe sexual practice, (34.9%) of the students was used condom in their first sexual intercourse. But more than half of the participants (65.1%) did not use condom during their first sexual practice. The reason not to use condom among non-users were (37.5%) of them ashamed to ask partner, (14.3%) of them not available, (35.7%) didn’t think, (7.1%) of them was substance abuse and the remaining (5.4%) are due to not know how to use (Table 2).

Regarding the premarital sexual practice (68.84%) of them did not ever involved in any sexual practice (no) but (31.16%) were experienced sexual intercourse (yes) with different people (Figure 1). 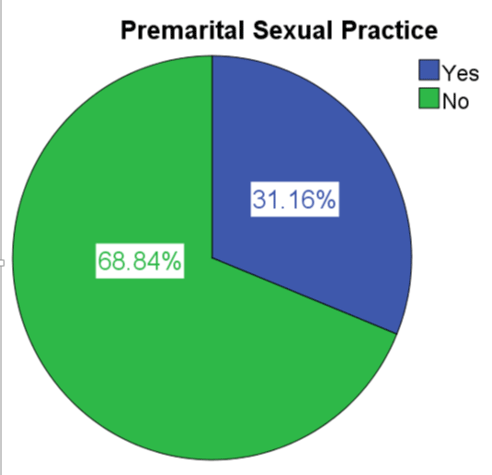 This study revealed that more than one fourth (31.16%) of the respondents had premarital sexual intercourse. It was in line with from Sebeta town, 28.3% [8], Bahir-Dar, 30.8% [9], Maichew, 29.3% [3], Gondar and Meteme, 31.9% [14]. But this study finding was higher than study done in Agaro, 25% [10] and Shendi town, 19% [11]. This could be explained by decrement of discussion about reproductive health risks and rise of pornography. Also, this study’s finding was lower than the study from Nepal, 36.5% [12]. This inconsistence could be justified by the difference in a background of the study participants and variation in the study areas.

Other finding revealed that condom use during first sexual intercourse in this study is about (34.9%). This finding is higher than from a study result 33.6% among students of Jimma town [13]. This could be due to fact that availability of information about condom has got an impact on condom use through time.

Study showed that, the student reason claimed to have the first sexual intercourse was due to fall in love, 39.5%, had desire, 24.4%, Peer pressure, 8.2% and to get money or gifts, 3.4%, Raped, 5.8%, and substance abuse, 18.7%. This finding is similar to the study conducted in Addis Zemen Town South Gondar (14). But the reason of having premarital sex among northern Ethiopia High School students was due to peer pressure (35.2%), and use of drugs, which is different from the current study [3]. The possible reason may be adapting of western culture and style.

One of the predictor variables in this study were students who drink alcohol four times more likely to report and begin premarital sexual practice than that of those who did not drink alcohol (AOR=4.06, 95% CI, (2.06, 7.99)). The possible reason might be, drinking alcohol decrease self-control and predispose to risky behavior such as early initiation of sexual intercourse [15].

This study has revealed that significant numbers of high school students are engaged in premarital sexual practice very early, with risky situation (different sexual partner, due to alcoholic consumption and non-use of condom). Attending to watch pornography, educational status of mother and dirking alcohol were independent predictors of premarital sexual practice among high school students. Therefore, health information supply on sexuality and reproductive health to disrupt the deep rooted believes and traditions should establish so as to bring behavioral change among students. As well students should be aware about high risk sexual behavior through behavioral materials and their family. Further interventional study design should need to be done.

Our special thanks and sincere appreciation should go to Madda Wallabu University, College of health science for funding this study. Also we would like to thank the study participant, data collectors, supervisors and Goba town high school director.

Declaration of conflict of interest

The authors declare there is no any conflict of interest.

This research was partially supported by Madda Wallabu University.