Copyright License: © 2018 TajEldin M Abdallah, et al. This is an open access article distributed under the Creative Commons Attribution License, which permits unrestricted use, distribution, and reproduction in any medium, provided the original work is properly cited.

Method: Using a cross-sectional hospital-based study design, patients who had been diagnosed as having HC between January and October 2017 were consecutively recruited in the study. The criteria proposed by the Seventh Joint National Committee were used for the definition of HC.

Result: A total of 81 (.81%) patients newly diagnosed as having HC were enrolled in the study. Of these patients, 50 (61.7 %) patients met criteria for HT-E, while 31 (38.3%) patients had HT-U. Renal impairment (16%), stroke (30.8%), acute coronary syndrome (13.6%) and heart failure (22.2%) were predominant complications associated with HT-E. Out of 81 study subjects, 13 (16%) patients died. Although there was no significant difference in residence, history of smoking, Diabetes mellitus and history of alcohol consumption between groups, old age (P=.o22), male gender(.046), history of hypertension(.007), history of non-governmental employee(.003), poor compliance (p=.002) and high case fatality rate (p=.041) were significantly associated with hypertensive emergency (HT-E).

It has been estimated that around 1% of patients with hypertension develop a hypertensive crisis during their lifetime, as consequence of inadequate blood pressure (BP) control. Hypertensive crisis (HC), is defined as extreme and symptomatic rising in BP (usually ⩾180/120 mm Hg). According to criteria proposed by the Seventh Joint National Committee HC was classified into either a hypertensive emergency (HT-E) or hypertensive urgency (HT-U) depending on evidence of target organ damage; HT-E is manifested by rapid worsening of target organs such as heart, brain, kidneys and arteries. HT-U is characterized by severe elevation of the blood pressure without evidence of end organ damage that need to be treated with oral anti-hypertensive drug, in order to reduce the BP within 24 hours [6-8].

Although HC is well described worldwide, there is no published data regarding the characteristics of individuals with HC in Sudan. Therefore this study aimed to analyze the clinico–epidemiological profile and survival outcome among patients presenting to kassala teaching Hospital with HC.

A total of 81 Patients aged ⩾18 years having been admitted to the outpatient clinic at kassala teaching hospital during January and through October 2017 with features suggestive of HC were enrolled in this study. The criteria proposed by the Seventh Joint National Committee were adopted for the definition of HC [7].

Hypertensive Urgency: HT-Us are those conditions associated with severe elevations in BP without evidence of end organ damage.

Detailed history was taken and proper physical examination was performed at the time of admission after signing an informed consent previously approved by the ethics research committee, kassala state. In the absence of circumstances that acceptable for signing, participation was authorized by the parents or guardians.

BP was measured using standard technique as recommended, in lying down as well as in standing position and average of three BP measurements obtained with a mercury sphygmomanometer and conducted by trained medical officer [9].

This study excluded, hypertensive patients with pseudocrisis and those with BP <180\120 mm Hg. female patients presenting with preeclampsia and eclampsia, patients and patients <18 years of age.

The study was conducted in confirmation of the national and international ethical guidelines for scientific research involving human beings (declaration of Helsinki) [10]. Ethical clearance of this study is obtained from the Research ethics committee at the ministry of health kassala state. Informed written consent was taken from the study subjects. The patients were managed according to the hospitals protocol for hypertension. It was clearly explained to the patients that refusing participation in the study will not affect their care and management.

Data was enter into computer data base using SPSS version 16, student t-test and chi-square test were used to compare between mean and proportions respectively, P< 0.05 was considered significant. 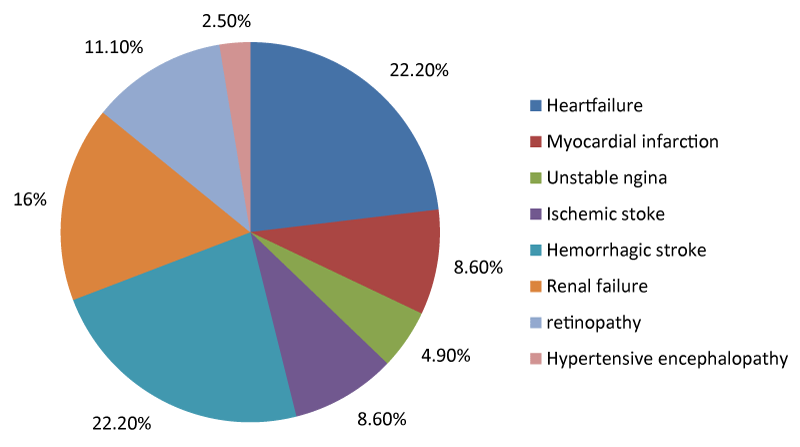 Reasons for greater prevalence of patients with hypertensive emergency in this setting may be attributed to many reasons, like Lack of awareness about control of hypertension, poor compliance to antihypertensive drugs and inability of the poor people to have an access for healthcare may be implicated also.

Similar to other study, We found that patients with hypertensive emergencies were older, 61.9 ±( 11.8),P ≤.001 than those with HT-U. Likewise the current study demonstrated that, History of hypertension p.007, history of poor compliance to anti-hypertensive drugs p .001 and nongovernmental employee p.003 were significantly associated with HT-E [18,19].

In compare to other previously published studies, our data showed that Women had a higher frequency of hypertensive crises than men, particularly for hypertensive urgencies, this observation may be explained by greater number of women in the hypertensive population in general, also women are more sensitive of their clinical status and more frequently seek health care [18-21]. On the other hand the current study revealed that men were significantly associated with HT-E; this fact may be attributed to the differences noted in the hemodynamic status between women and men, as women, until menopause, have lower peripheral vascular resistance, hence, they have lower blood pressure levels than men at the same age. Similarly Martin et al., in his study reported high prevalence of hypertensive emergency among male [17,22].

In comparison with the study by Vilela et al., in Brazil, The present study showed that, among hypertensive emergencies, cerebrovascular accidents were the most frequent, and, among these, hemorrhagic stroke was the most common, followed by ischemic stroke, left ventricular failure, acute coronary syndrome and renal failure [23].

Regarding the clinical manifestations and according to the clinical presentation of HC the present study demonstrated that in order of frequency the clinical symptoms were headache, dizziness, neurological deficits, and dyspnea and chest pain. Such findings are in agreement with the results of many previous studies [15,24,25].

The greater case fatality rate shown in this study was comparable to that reported by many other studies [26-28].

Limitations; Firstly the sample size was small and taken from a single-tertiary care hospital, hence it represents people visiting this hospital, and not representative of the whole inhabitants.

Secondly many other risk factors like sedentary lifestyle, obesity were not considered in this study, therefore large samples size study is needed.

Thirdly retinopathy difficult to be assessed in considerable numbers of patient’s particularly very thick patients and those losing their consciousness.

Our thanks extended to Dr. Aurwa for his unlimited support. Also our thanks extend to staff from kassala teaching Hospital for their facilitation of the work.