Copyright License: © 2017 Razvodovsky YE. This is an open access article distributed under the Creative Commons Attribution License, which permits unrestricted use, distribution, and reproduction in any medium, provided the original work is properly cited.

Objectives: To estimate the effects of recent alcohol taxation and pricing policies on vodka sales per capita in Russia.

Methods: Trends in the affordability of vodka, excise tax rates on vodka, real and minimum price of vodka and per capita vodka sales between 2010 and 2015, were compared.

Conclusions: These findings indicate that pricing policy has potential to reduce binge drinking of vodka in Russia.

Harmful drinking was identified as one of the major contributor to premature death toll in Russia [1,2]. Recent estimates suggest that alcohol may be responsible for 59% of all deaths of working-age men [3]. The high level of alcohol-related mortality in Russia seems to have been underpinned by high overall level of alcohol consumption and binge drinking pattern [4]. The current alcohol consumption figure in Russia is one of the highest in the world (16.6 liters of pure alcohol in 2005) [5].

Through the centuries the scale of alcohol-related problems was underestimated by the Russian government [6]. Recently the government has become increasingly concerned about the public’s health, as it has realized that population decline is a serious threat to the long-term development of the economy [7]. Anti-alcohol activity in Russia began with the adoption of two laws in 2005, which increased government control over the alcohol market [8].

An active phase of the alcohol reform was started in 2009, when the Federal Service for Alcohol Market Regulation (Rosalkogolregulirovanie) was established. In January 2010, the minimum price on vodka was introduced. Most importantly, excise tax rates on vodka in Russia have been increased [9]. Further, a new set of amendments to the 171 Federal Low were adopted in 2011 [8]. A wide range of new regulations was imposed on the manufacture and sale of alcoholic beverages in 2012 [10]. There are some indications, that mortality has been improving in Russia in the past decade, due in part to the government’s measures that have made alcohol less affordable [11,12].

Available evidence suggests that low price is one of the major drivers of alcohol consumption and alcohol-related harm [13,14]. The majority of aggregate econometric studies indicate that higher taxes and real prices on alcohol significantly reduce the alcohol consumption [13-16]. It was suggested that reducing the affordability of alcohol is one of the most effective interventions for reducing the harm caused by alcohol [17]. Russian historical perspective also provides evidence that decreasing in vodka affordability by rising taxes is the effective strategy for reducing alcohol-related harm [6].

Against this background, it would be interesting to estimate the effects of recent alcohol taxation and pricing policies on vodka sales per capita in Russia. In relation to this, trends in the affordability of vodka, excise tax rates on vodka, real and minimum price of vodka and per capita vodka sales between 2010 and 2015, were compared.

The data on vodka sales (in liters per capita), excise tax rates on vodka, average salary and real retail and minimum price of vodka are taken from the Russian State Statistical Committee (Rosstat) reports (http://www.gks.ru/). Here we specified the number of liters of vodka that an average monthly salary could buy as the affordability of vodka. To examine the relation between dependent variable (vodka sales) and independent variables (excise tax rates on vodka, real retail and minimum price of vodka, affordability of vodka) a Pearson correlation analysis was performed using the statistical package “Statistica 12. StatSoft”. 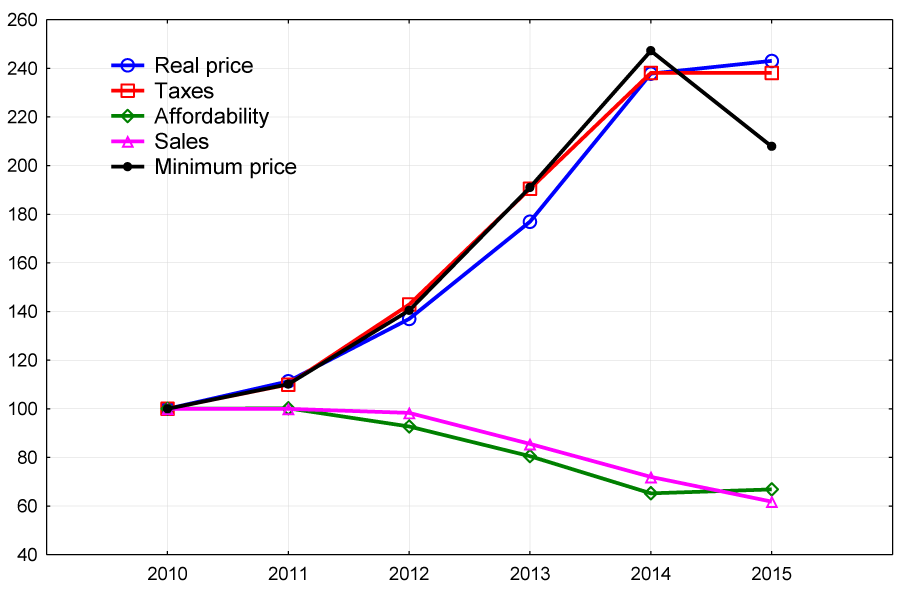 Figure 1: Indices of real and minimum price, tax, affordability and per capita vodka sales in Russia (2010-100%).

The results of the analysis suggest an inverse relationship between excise tax rates on vodka, real and minimum price of vodka and sales of vodka at the aggregate level. These findings are consistent with the principle that increasing the price of alcohol reduces its consumption [13-16]. A significant decreasing in the affordability of vodka appears to have been a major driver of dramatic decreasing in vodka sales between 2010 and 2015. It is clear that this development might be attributed to the implementation of the alcohol policy measures over the last years. The policies included strict regulations on alcohol products, which resulted in a decline of distributors and increased consumer prices [7]. Making vodka less affordable through differential taxation was an essential element of the Russian alcohol policy. Unfortunately, facing economic crisis the Russian government reduced minimum price on vodka by 16% from February 1, 2015, which means the increasing in the affordability of vodka [18].

Before concluding, some potential limitations of this study must be addressed. First and foremost: the use of simple correlation in the analysis of time series may lead to false correlations, which can be avoided by using the method of ARIMA (autoregressive integrated moving average), which requires around 50 time points [19]. Further, we relied on official vodka sales data across the study period. However, statistics on recorded alcohol consumption in Russia suffer from a high degree of uncertainty, especially in the post-Soviet period [5]. Finally, the unrecorded consumption of alcohol was commonplace in Russia throughout the study period, especially in the most recent years, when a considerable proportion of vodka came from illicit sources [18].

Overall, the results from this study suggest that in Russia, consumer demand for vodka is very responsive to price. These findings indicate that pricing policy has potential to reduce binge drinking of vodka in Russia. Russian government should consider the complementary effects of other alcohol policies that could be implemented concurrently to reduce alcohol-related burden. It is necessary to address several issues: high level of alcohol consumption among working-age men, high availability of alcohol for young adults and consumption of illegal alcohol and non-beverage alcohol surrogates. Alcohol control policy should be based on the scientific evidence and be sensitive to national context. The main goal of alcohol control policy must be the substantial decrease of alcohol consumption per capita.