Copyright License: © 2018 Jara P, et al. This is an open access article distributed under the Creative Commons Attribution License, which permits unrestricted use, distribution, and reproduction in any medium, provided the original work is properly cited.

The results allow to demonstrate a high sensitivity of the technique, besides allowing the use of samples up to seven days of storage at 4°C, despite the fragility of RNA viral.

The virus has envelope and a size between 150 to 300 nm in diameter and a chain simple RNA of negative polarity and RNA polymerase [2]. The lipoprotein of the envelope is easily destroyed by lipid solvents, and thus the virus loses its capacity infective It also has the membrane protein (M), two glycoproteins: hemagglutinin (H) and the fusion protein (F) that induce the production of antibodies neutralizing agents, two proteins associated with transcriptases (P and L) and the core protein capsid (N) that covers the viral RNA [1,3,4].

Although there are some antigenic differences between CDV strains shown by serological tests, it is generally accepted that there is only one serotype. But nevertheless, there are considerable differences in the pathogenicity of the different strains isolated [5-7].

In 1905 Henri Carré discovered the VDC, which causes the most widespread, contagious and lethal multisystem disease of candies and other species of mammals (Mustelidae, Procyonidae, Ursidae, Viverridae, Hyaenidae, Phocidae and Felidae) [9-11].

In Chile, the presence of CD was suggested empirically until 1994 when it was reported the first isolation of the virus in cell cultures inoculated with secretions from a Canine puppy that showed nervous signs with unilateral myoclonus, movements involuntary and ascending paresia of the posterior train. The clinical diagnosis was corroborated by histopathological studies, electron microscopy and direct immunofluorescence [12,13].

CDV causes a febrile, acute or sub-acute and highly infectious disease in dogs and other carnivores. The overburden cases, characterized by sudden onset of fever and sudden death are rare, but the acute process is frequent. After a period of incubation for three to seven days, animals have a biphasic elevation of temperature, which reaches 41ºC, with a second maximum corresponding to the appearance of a severe leukopenia. During this stage are anorexia, catarrh, conjunctivitis and depression. Some animals show respiratory signs, and others present digestive signs [14,15].

After the onset of the disease, some dogs develop nervous signs after the systemic disease. Depending on the viral strain, these signs can be related to acute illness (attacks and myoclonus with hyperesthesia and depression) or with sub-acute disease (incoordination, ataxia, paresis, paralysis and muscle tremors). Some viral strains produce hyperkeratosis of the footpad and nose [2]. Dogs infected acutely eliminate viruses through all secretions bodily. The most important route of transmission is through aerosols of secretions [5]. This virus removal begins approximately seven days after infection (PI). Dogs that recover after infection with CDV are not immune for life, do not remain persistently infected or eliminate viruses [16].

There are several techniques for the diagnosis of CD, among them are: histological diagnosis, where inclusion bodies can be found in cells of the oral and conjunctive mucous membranes; the analysis of cerebrospinal fluid, where it is usual dogs with nervous commitment have increased the concentration of proteins and cells mononuclear; or the ELISA test for specific IgM, where antibodies are looked for specific for the virus. However, something that all the tests share is the appearance of false positives, when performed shortly after vaccination of the specimen. In the case of negative results, the absence of the disease cannot be affirmed either, since both in the early stages of the infection and in very late these tests they show a very low sensitivity, so they are only diagnostic approximations. Among the definitive diagnoses are viral isolation, which does not constitute a routine technique within the diagnostic laboratories and the RT-PCR technique, which allows to detect more sensitively the presence of the virus [5,17]. Currently, the diagnosis of CD in Chile continues mainly in the hands of the clinical signology, for which no studies have yet been reported to detect differences between national CDV isolates at the genomic, antigenic or biological level that could explain something troubling: the presentation of the clinical picture in dogs with their daily vaccination program.

CDV is characterized by damaging innate and adaptive immunity from moments of the infectious disease due to its high lymphotropism and ability to generate change of essential functions in immune cells. It has been described that attenuated viruses currently used in modified live vaccines maintain their lymphotropism and ability to induce immunosuppression, compromising the balance of responses previously mentioned [18,19].

In Chile, it is advisable to vaccinate with monovalent vaccine between ten and twelve weeks; to fourteen or sixteen weeks and twenty-four weeks. When using the sixfold vaccine (CDV, leptospira, hepatitis 1 and 2 viruses, canine parvovirus type 2 and parainfluenza type 2) the scheme advises to apply the parvovirus vaccine at eight weeks; at ten weeks sixfold vaccine and at sixteen weeks the sixfold vaccine. The recombinant vaccine eightfold applies from six weeks of age and every twenty-one days until twelve weeks (three doses) [20].

In this report, the general objective was to detect the gene of the hemagglutinin (H) of CDV by RT-PCR, as confirmation to the clinical diagnosis of the disease.

1. For this purpose, it was proposed: to detect the gene of Hemagglutinin in commercial vaccines NOBIVAC® PUPPY and CANIGEN MHA2PPi / L for CDV by RT-PCR, used as reference strains

2. Detect the gene of the CDV hemagglutinin obtained from suspicious clinical samples.

The experimental design used in this work included the detection of the CDV H gene in fresh blood samples (one week of obtained) and samples with one or more months of obtained.

Samples: Thirty samples were taken consisting of 2 mL of peripheral blood from dogs of any age and sex, suspected of being in the disease and positive to the test of IgM specific for CDV. For this purpose, it was supported by the Santiago Veterinarian Laboratory, the Neurological Veterinary Institute and the Vet-lab® laboratory. Samples with and without anticoagulant were refrigerated at 4° C for later extraction.

Detection of the H gene in CCV. Sensitivity by the technique

Samples of one or more months old

Eight samples were processed corresponding to one-week old clinical samples stored in tubes with anticoagulant and two commercial vaccines. Thus, the samples were homogenized gently, an aliquot of 250 uL was taken and separated into tubes, then the Histopaque © 1077, Sigma-Aldrich® product to obtain the phlogistic layer of the shows and thus get higher viral concentration to proceed to the detection of the virus. 250 uL aliquots were prepared and RNA extraction was carried out. In parallel, two samples one week old, different from the previous ones, stored in tubes with anticoagulants, positive against the RT-PCR kit used by Vet-lab®, were processed to make the comparison in the detection sensitivity from the direct sample and a show following the protocol for the extraction of the phlogistic layer.

In the RT-PCR reaction the "SuperScript one step RT-PCR with platinum Taq" kit was used (Invitrogen®) following the protocol proposed by the company, which consisted of 25 uL of the "2x Reaction Mix" component, which contains 0.4 mM of each deoxyribonucleotide and 3.2 mM of MgSO4, 2uL of "SuperScript. III RT / Platinum Taq Mix ", 2uL of each splitter and 19 uL of RNA tempering to reach a final volume of 50uL.

The visualization of the amplified product was carried out by gel electrophoresis of 2% agarose (Winkler®) in Tris acetate EDTA (TAE) buffer (Fermentas®) and later staining with ethidium bromide (0.5 μg / ml) (Fermelo®) for thirty minutes.

Detection of the H gene in CCV. Sensitivity by the technique

Two bands were visualized corresponding to a fragment of DNA of approximately 174 bp, in the lanes of both commercial vaccines (Figure 1).

It is possible to visualize a fragment of approximately 174 bp, both in the positive controls and in five of six clinical samples (Figure 1). 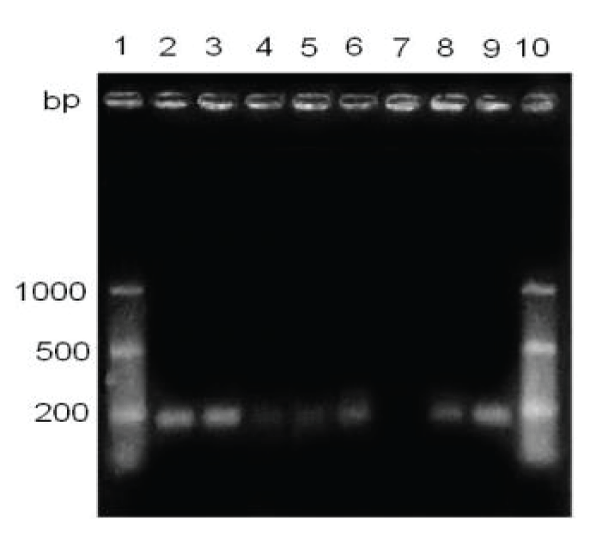 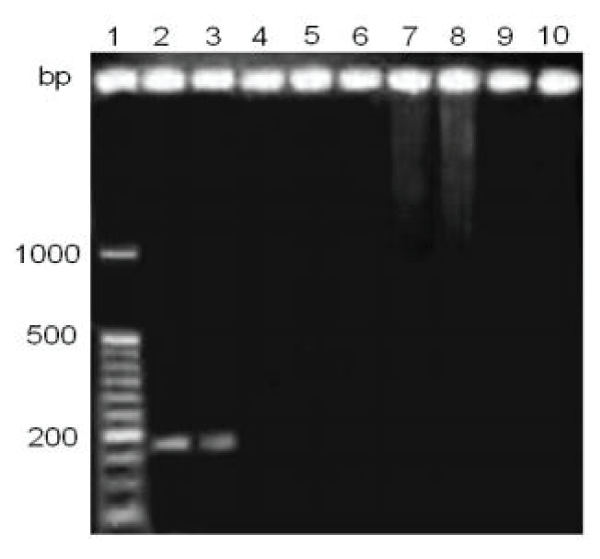 Approach to the sensitivity of the technique 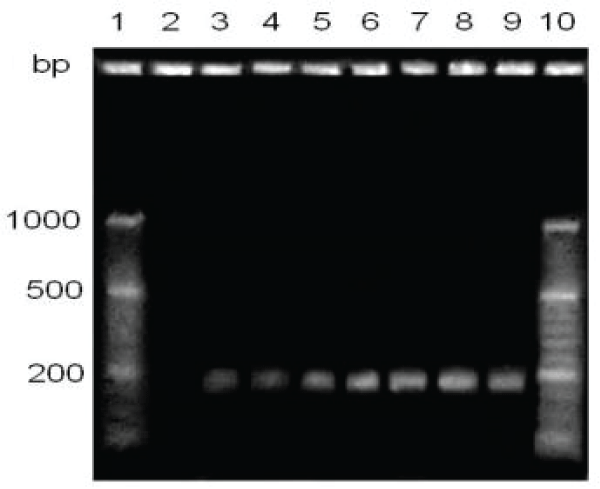 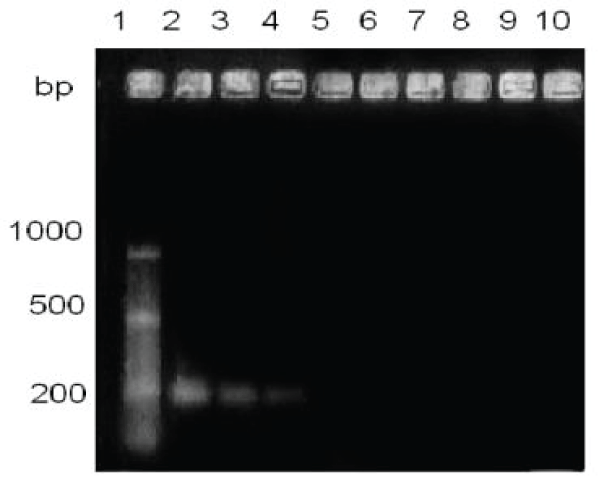 The 20 samples did not present visible bands in the transilluminator of UV light. Only in the case of positive controls (commercial vaccines) was the visualization of a DNA fragment of approximately 174 bp (the image of the results was not attached at work).

The cases of CD are a major concern within the task veterinary clinic. Thus, in recent years, the appearance of many cases has alarmed the veterinary doctors, since they have a special characteristic, the appearance of the disease in adult animals and with its vaccination plan up to date. This leads to the search for a CD confirmatory diagnostic method and that allow timely treatment of the disease [21]. Worldwide CD cases have been associated with a poorly performed vaccination plan, or to the suspicion of a residual virulence in vaccines [23]. The RT-PCR technique for the detection of the hemagglutinin gene was selected because this protein expressed by the virus is responsible for generating the response immune in the organism, besides being used worldwide for its diagnosis [24]. The hemagglutinin gene has the greatest variation, reaching 10%, being used generally for the establishment of phylogenetic trees of the virus [25-27].

In this report, a fragment of 174 bp was amplified in both clinical samples as in vaccine strains, which would allow its use as a diagnostic tool confirmation of the clinical diagnosis, as an alternative to the diagnostic kit of the company BioingenTech®, currently used, regardless of whether this kit appears to be is detecting a different gene: the N gene [28]. The results suggest a high sensitivity of the technique implemented in this report that would allow the use of blood samples up to seven days after being extracted from the animal, despite the fragility of viral RNA [14]. In relation to the detection of the 174 bp fragment in commercial vaccines, it was possible to perform an estimate of the sensitivity of the technique and the results show a high sensitivity. RT-PCR designed for the same gene segment, reach up to detect 103 copies of the viral RNA, however the strategy used in this report prevent compare both values [1].

The use of Histopaque© 1077 reagent (Sigma-Aldrich®), was able to increase the sensitivity of the technique, becoming a recommended step within the protocol. This is because it allows to separate the phlogistic layer of a blood sample, where the cells of the white line, white of infection of the CDV, are located, thus obtaining a higher viral concentration.

One of the critical points that must be considered during the process of the technique is the incubation time in ethidium bromide. In this report, it was established that increase the staining time of the genomic material to double (60 minutes), it could be significantly increase the sensitivity of the technique. As this reagent is of character carcinogenic, an alternative to study is the use of an analogous product like GelRed Nucleic Acid Gel Stain TM. However, the effect on sensitivity should be analyzed of the technique.

Although, there are variations in the H gene represented by amino acid substitutions in key epitopes of protein H, apparently the 174 bp fragment is a good choice as target of detection in clinical samples and probably visualization of the DNA bands can be improved by increasing from 35 to 40 cycles in the of the PCR, modifying the protocol used [22].