Copyright License: © 2018 Artur de la Villarmois E, et al. This is an open access article distributed under the Creative Commons Attribution License, which permits unrestricted use, distribution, and reproduction in any medium, provided the original work is properly cited.

Background: Benzodiazepines are usually prescribed for anxiety and sleep disorders in a long-term fashion that may cause drug dependence. Discontinuation after prolonged administration may lead to withdrawal expression, being anxiety the most predominant sign. It has been described that a context-dependent associative learning process underlies diazepam dependence. Nitric oxide is a crucial player in learning and memory processes, hippocampal transmission, as well as in benzodiazepines withdrawal. Considering that previous results from our laboratory showed an increase in hippocampal functional plasticity only in diazepam dependent rats, the aim of the present investigation is to determine whether diazepam dependence could alter neuronal nitric oxide synthase enzyme (NOS-1) expression within the hippocampus, by using western blot.

Conclusion: withdrawal from long-term diazepam exposure could be associated to increased nitric oxide neurotransmission within dorsal hippocampus induced by NOS-1 over-expression. This mechanism could underlie the improved hippocampal synaptic transmission previously observed in diazepam withdrawn animals. Confirmatory experiments need to be addressed to determine the mechanisms by which nitric oxide participates in benzodiazepines withdrawal in order find new molecular targets to develop pharmacological tools to prevent the withdrawal syndrome

Benzodiazepines are commonly prescribed for the treatment of anxiety and sleep disorders. However, prolonged treatment may lead to dependence with evident withdrawal syndrome [1-3]. Long-lasting neuroadaptations resulting from repeated drug exposure involve an associative learning process [4-7]. These learning and cognitive aspects of addiction suggest the existence of common neurobiological mechanisms mediating drug addiction and memory [5,8-10]. Both phenomena are accompanied by alterations in synaptic plasticity at glutamate synapses in the reward pathway, involving the ventral tegmental area, nucleus accumbens, and frontal cortex [8,11]. In addition to the relevance of the reward circuitry in the development of addiction, other brain areas such as the hippocampus (HP) have been implicated [12]. This brain structure plays a great role in processing the associations between the environmental context and unconditioned stimuli such as drugs of abuse [13]. Within the HP, the long-term potentiation (LTP) characterized by an enduring increase in the efficacy of glutamatergic synaptic transmission is a major form of synaptic plasticity. This phenomenon is accepted as a molecular mechanism for learning and memory in the brain in which contextual cues are relevant [14,15]. We have previously described that Diazepam (DZ) dependence was related to a marked and sustained enhancement in the HP dentate gyrus synaptic transmission [6,16], supporting the relevance of HP synaptic plasticity in maintenance of the memory trace during BZD withdrawal.

Neuronal excitability and synaptic plasticity in HP and other brain areas, are modulated by nitric oxide (NO) [17]. NO is a diffusible neuromodulator synthesized in the brain mainly by the neuronal NO synthase enzyme (NOS-1) following glutamatergic N-Methyl-D-Aspartate (NMDA) receptor activation [18], and it is involved in a variety of physiological and pathophysiological processes including nociception [19], neurogenesis [20], learning and memory [21], anxiety [22] and seizure activity [23]. Furthermore, NO activated pathways contribute to neuronal adaptations induced by different addictive drugs [24-26] and inhibition of NO synthesis attenuates pentetrazole-induced withdrawal syndrome in diazepam-dependent mice [27], and reduces withdrawal expression from psych stimulants [28], nicotine [29], opioids [30,31], ethanol [32]. Then, considering that the evidence regarding participation of NOS-1 in BZD withdrawal is based on pharmacological and behavioral results, the aim of the present investigation is to characterize possible changes in NOS-1 expression within the HP induced by DZ dependence.

All procedures were carried out in accordance with the National Institute of Health Guide for the Care and Use of Laboratory Animals (NIH Publications No. 80-23) revised 1996 and by the ARRIVE guidelines of the National Centre for the Replacement, Refinement, and Reduction of Animals in Research (2011) adopted by NIH. All protocols were approved by the Animal Care and Use Committee, School of Chemical Sciences, National University of Cordoba (RES-48-2015). Experiments were made minimizing the number of animals used and their suffering.

Male Wistar rats of 5-6 weeks old at the beginning of the treatment, obtained from the Department of Pharmacology- IFEC CONICET vivarium (Facultad de Ciencias Químicas, Universidad Nacional de Córdoba, Argentina) were used. Animals were housed in groups of 3, in plastic boxes with metallic gridded tops, using sawdust as bedding material, in a temperature and humidity controlled conditions under a 12-h light/dark cycle (light on at 7 am). Food and water were freely available.

Animals received DZ (5mg/kg/day, n=32) or VEHIC (n=10) via intraperitoneal (i.p.) along 18 days (Figure 1a). This procedure was performed by the same operator, in the same room location and with a specific piece of fabric used along the treatment. Forty eight hs. After the last DZ or VEHIC administration, animals were evaluated in the elevated plus-maze (EPM) test to evidence an “anxiety-like behavior” as a sign of the withdrawal syndrome. Immediately after the EPM, a group of rats (n=16) were sacrificed for western blot experiments, by guillotine decapitation.

The EPM apparatus consisted of two opposite open arms (50x10 cm), and two opposite enclosed arms, (50x10x40 cm), with an open roof arranged. The arms extended from a central platform (10x10 cm) and the apparatus was elevated to a height of 50 cm. Rats were placed in the center of the maze during 5 min and different dependent variables were analyzed using the method previously reported. These variables include percentage of time spent on the open arms (%TA), entries and extreme arrivals in open arms, which served as index of anxiety. Also, the entries in closed arms were measured as loco motor activity index.

Immediately after the EPM test animals were sacrificed by guillotine decapitation, their brains were quickly removed and placed on ice. Coronal brain slices of 2 mm containing dorsal or ventral HP were prepared, homogenized in a lysis buffer containing protease and phosphatase inhibitors, the homogenate were centrifuged at 12000g for 10 min at 4 °C. The supernatant was combined with Laemmli’s buffer, boiled at 100 °C for 5 min and stored in aliquots at -20 °C until use. Aliquots of the supernatant were used for total protein quantification using the Bradford´s method. Samples (70 µg of protein) were separated in 8% SDS-PAGE gel, and transferred to polivinylidenedifluoride membranes in a Tris-glycine buffer, 20% methanol. Membranes were cut at 75kDa in order to incubate NOS-1 (160kDa) and actin (43kDa) with their respective antibodies. Then, they were incubated overnight at 4 °C with a previously characterized, commercially available NOS-1 antibody (1:500; Cell Signaling Technology, Cat #4234), and actin antibody (1:1000; Santa Cruz Biotechnology, INC. Cat# sc-1616), the next day membranes were subsequently incubated with the corresponding anti-rabbit antibody (1:20000; IRDye 800 wc) and anti-goat antibody (1:20000; IRDye 680 LD) for 2 h at room temperature. The membranes were scanned (Odyssey CLx, LI-COR) and the value of optical density (OD) of each band was quantified with an image analysis program (GelPro32 Analyzer). The actin expression was used as internal control and results are expressed as OD NOS-1/OD actin.

Results from EPM and western blots were analyzed by one-way ANOVA, followed by the post hoc Newman-Keuls pairwise comparisons of means. Pearson’s correlation was used to analyze the correlation between %TA and NOS-1 protein levels. Analyses were performed using GraphPad Prism 6. Data were expressed as the means±SE. The significance level used for all statistical analyses was set at p<0.05. 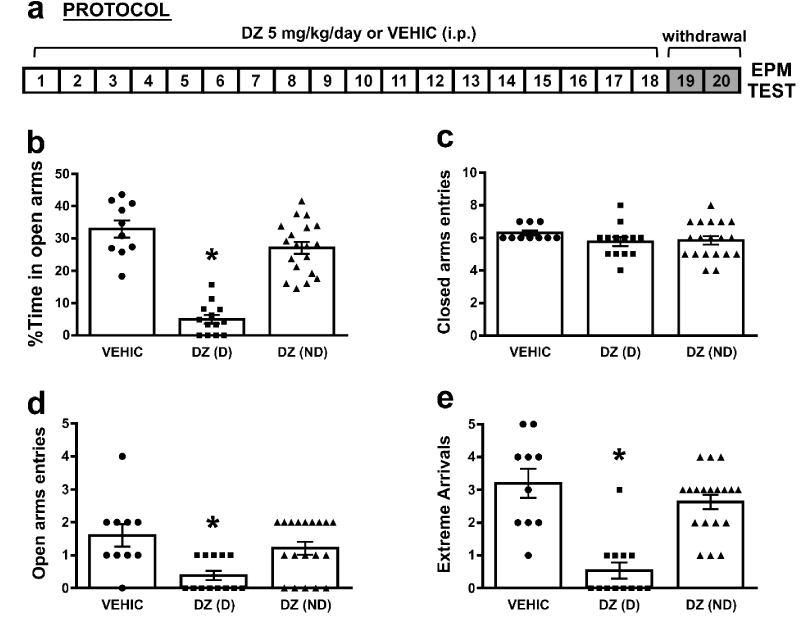 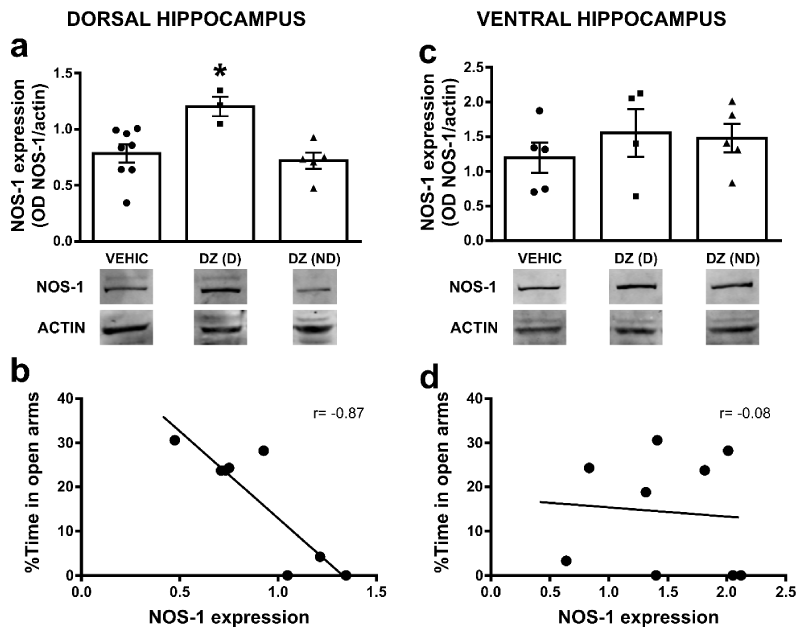 Drug dependence is often related to a contextual learning phenomenon [33], and seems to be the principal mechanism underlying BZD dependence, in which the contextual environment during drug administration have a preponderant role in establishment of physical dependence and withdrawal in both animals and humans [4,34]. The HP, through its connections with structures such as the Amygdala or the medial Prefrontal Cortex, among others, is a brain structure implicated in contextual conditioning [35]. Furthermore, the anxiogenic effect promoted by DZ withdrawal was accompanied by significant Fos-positive immunoreactivity in telencephalic, diencephalic and mesencephalic areas related to anxiety and fear circuits in the brain [36], as well as to enhanced Locus Coeruleus and Dorsal Raphe Nucleus neuronal activity [16,37]. All these changes may contribute not only to the physical withdrawal symptoms involving autonomic function, but also to the increased HP plasticity that has been described to underlie DZ dependence and withdrawal [6,16,38]. Previous reports from our laboratory showed that the increased HP plasticity observed during DZ dependence is positively associated to the expression of the behavioral signs of DZ withdrawal; while absence of anxiety-like behavior is associated to HP synaptic transmission comparable to control values [4,6,16]. Moreover, considering the role of NMDA receptors in several types of learning, it seems likely that these receptors participate in the conditioning of the behavioral activation observed after chronic psychoactive drug treatments [39-41]. In fact, administration of MK-801, a non-competitive NMDA receptor antagonist, impairs the development of tolerance to DZ and other psychoactive drugs [42-44], prevents the enhanced HP synaptic plasticity and the increased mRNA for the NR1-NR2B NMDA receptor subunit associated with the development of tolerance to DZ [45].

In this scenario, NO synthesized upon NMDA receptor stimulation [46], seems to play an important role not only in learning and memory processes [47] and HP LTP [48], but also contribute to the neuronal adaptations induced by different addictive [24-26,49]. Indeed, likewise to the MK-801 effects, inhibition of NO synthesis reduces withdrawal expression from psychostimulants [28], nicotine [29], opioids [30,31,50], ethanol [32] and BZD [27]. Furthermore, chronic nicotine withdrawal increases NOS-1 immunoreactivity in the Dorsal Raphe Nueclues and Locus Coeruleus of adult rats [51]. In the present work, we showed that chronic DZ increases NOS-1 protein levels within the dorsal HP only in dependent animals (DZ(D)), while non-dependent animals did not show alterations in NOS-1 protein levels compared to control rats. This result is in agreement with previous findings indicating that acute inhibition of NO synthesis decreases anxiety in the EPM test in rats [52], while augmentation of the NO-activated cascade induces anxiogenic-like effect in mice [53]. The dorsal HP is a region primarily involved in the cognitive process of learning and memory [54], and it is important to note that the increase in NOS-1 protein levels was only observed in this region and not in ventral HP.

Analyzing previous reports together with the present behavioral and molecular results, a negative and significant correlation was observed between “anxiety like” behavior and NOS-1 expression within dorsal HP, supporting previous results in which low levels of %TA were related to increased HP transmission and now with high NOS-1 protein levels. These augmented protein levels may indicate that NOS-1 enzyme evidenced a neuroadaptative process after repeated administration, in which activation of NMDA receptors during chronic DZ exposure may lead to a NO overproduction that up-regulates NOS-1 protein expression within HP, explaining at least in part, maintenance of high levels of HP synaptic plasticity during long term DZ withdrawal [6], as well as expression of the “anxiety like” behavior. However, we cannot discharge that changes in NOS-1 levels or synaptic transmission in other brain structures may account for expression of DZ withdrawal.

Long-term DZ exposure seems to be able to induce functional and molecular changes within the HP, such as enhanced synaptic transmission probably by increases of NO availability, and consequently contribute with the learning and memory processes that underlie BZD dependence. Further studies need to be conducted in order to confirm the causal relationship between BZD withdrawal expression, HP synaptic transmission and NO signaling, as well as to characterize other mechanism and/or brain structures involved in this process and the molecular pathways by which NO participates in BZD dependence in order to find new molecular targets to design pharmacological tools to prevent DZ dependence and withdrawal.

We thank Tec. Lorena Mercado and Estela Salde who assisted us with western blot experiments.

Statistical tools, protocols, suppliers and data presented within the manuscript are sufficient to fully reproduce results of the article.