Copyright License: © 2019 Habib M, et al. This is an open access article distributed under the Creative Commons Attribution License, which permits unrestricted use, distribution, and reproduction in any medium, provided the original work is properly cited.

Background: Congenital Vascular malformation relatively rare and extremely varied clinical presentations. The purpose of our study was to present our initial experience of embolization in a series of 26 patients with congenital vascular malformation to assess retrospectively the results and the complications of ethanol and coils embolization treatment of these patients.

Methods: Retrospective trial, the study group consisted of 26 patients with congenital vascular malformations. Transcatheter arterial embolization by ethanol or coils were performed, Therapeutic outcomes were established by evaluating the clinical outcome of symptoms and signs, as well as the degree of devascularization at follow-up angiography.

Results: Between November 2014 and March 2018, 26 consecutive patients (3 male, 23 female) at Alshifa Hospital - Cardiac Catheterization Center with congenital vascular malformations in the body and extremities underwent staged ethanol or coils embolization. The mean age of the patients was 25 years (age range, 6– 59 years). Ethanol embolization was administrated in 16 patients, coil embolization in 9 patients and graft stent in one patient. The side effect such as pain, pulsation, and bruit in most of the patients were obtained. The reduction of redness, swelling, and warmth was achieved in all of the patients, According to the angiographic findings, congenital vascular malformation were devascularized 100% in 12 patients, 50% to 99% in 11 patients, less than 50% in 3 patients. The most common complications were reversible skin necrosis.

Conclusion: Transcatheter embolization by ethanol or coils has proved efficacious and safe in the treatment of congenital vascular malformation of the body and extremities but with acceptable risk of complications

Congenital vascular malformations are rare congenital anomaly, and have been known as one of the most diagnostically difficult and therapeutically enigmatic illnesses in the practice of medicine.

Embolization has rapidly developed in recent years and now represents an integral part of interventional radiology/cardiology practice. Embolization is defined as the percutaneous endovascular application of one or more of a variety of agents or materials to accomplish vascular occlusion.

AVMs are rare congenital lesions. Complete eradication of the nidus of an AVM is the only potential cure [3]. However, surgical resection is often difficult, and recurrence of the AVM is common with incomplete resection. Therefore, only surgically resectable lesions should be selected for the surgical therapy either alone or combined with various embolosclerotherapies either before or after the surgery. Transcatheter embolisation now plays a significant role in the treatment of AVMs [4]. Preoperative embolisation may be helpful prior to surgical intervention, due to the increased risk of massive bleeding associated with such anomalies.

A retrospective review of patient medical and imaging records from our cardiac catheterization center at European Gaza Hospital were recorded, Written consent for the procedure was obtained from all patients after a discussion about the advantages and risks of the procedure. From November 2008 to March 2014, 26 consecutive patients (3 male, 23 female) with congenital vascular malformations in the body and extremities underwent staged ethanol or Coils embolization. One patient had previously undergone unsuccessful operations. In the 26 patients, ethanol or coils embolization were decided as the primary treatment method by vascular surgeons and interventional cardiologist after full review of findings from clinical and imaging examinations of the patients. Diagnoses of congenital vascular malformations were made on the basis of findings from clinical and imaging examinations, and patients often had more than one symptom and sign. Pulsating mass 12 patients of (46%) and pain in 11 patients (42%) were the most common signs and symptoms. One patient (4%) had congestive heart failure consisting of dyspnea on effort and cardiomegaly. Only two patients (8%) had bleeding bleeding at the ulcerated skin.

All procedures were performed by 2 experienced interventional cardiologist, ten patients with 16 embolization procedures received local anesthesia. The blood pressure, electrocardiogram, and oxygen saturation, were constantly monitored during the procedure.

Staged ethanol embolization was performed at the nidus itself and not at the vascular feeders; the goal was to embolize all or part of the nidus until complete resolution or improvement of clinical symptoms and signs was achieved. Routes of vascular access to the nidus were chosen after initial angiography. Transarterial, catheterization by using a coaxial catheter and/or percutaneous direct puncture was required to reach the nidus for embolization. The area of percutaneous puncture was prepared and draped. An 18–21-gauge needle was advanced by using fluoroscopic guidance. In most cases, proximal inflow occlusion by over the wire balloons was performed during ethanol injection. After ethanol injections, we waited 5–10 minutes and then performed arteriography to determine completely embolization.

Evaluation of the clinical data and Follow-up results

Two cardiologist working in consensus analyzed the therapeutic responses to ethanol or coils embolization by comparing the degree of CVMs devascularization between the baseline angiography and final angiography (i.e., 100%, 50- 99%, or < 50%).

Complications were classified as being either major or minor. The major complications included death, infection, or renal failure as a result of muscle necrosis or permanent adverse sequelae such as permanent nerve injury, brain infarct, the required performance of major therapy and prolonged hospitalization (> 48 hours). Minor complications included any nonpermanent adverse sequelae. (Transient peripheral nerve injury) and skin necrosis.

Between November 2008 and March 2014, 10 consecutive patients (3 male, 23 female) with congenital vascular malformations in the body and extremities underwent staged ethanol or Coils embolization. The mean age of the patients was 25.9 years (age range, 13– 59 years). During the 16 ethanol embolization performed, the amount of ethanol that was used ranged from 4 to 50 mL in a single embolization session. When maximum amounts of ethanol were used, the total dose did not exceed 1 mL per kilogram of body weight. No patients experienced ethanol toxicity. No patients showed an elevation in creatinine and urea levels, suggesting that renal impairment as a result of hemoglobinuria did not occur during the hospital stay.

According to the angiographic findings, congenital vascular malformation were devascularized 100% in 12 patients, 50% to 99% in 11 patients, less than 50% in 3 patients. The most common complications were reversible skin necrosis.

Case of 59- year-old male patient presents with dyspnea on effort and cardiomegaly (Figures 1,2). 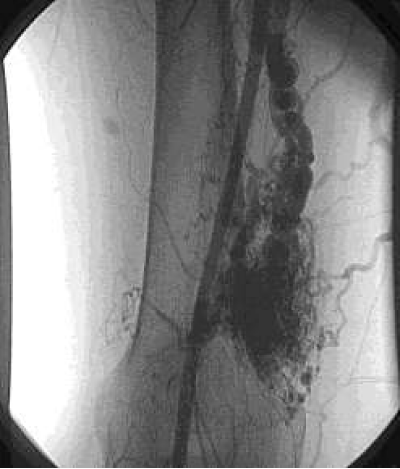 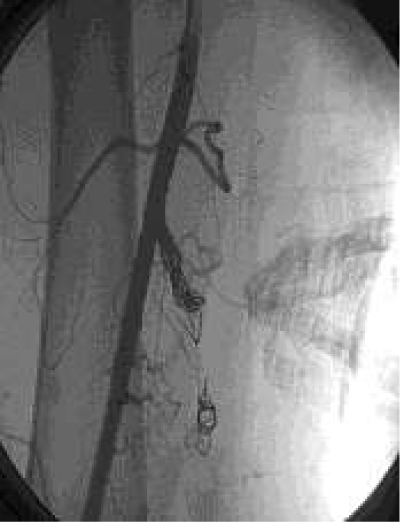 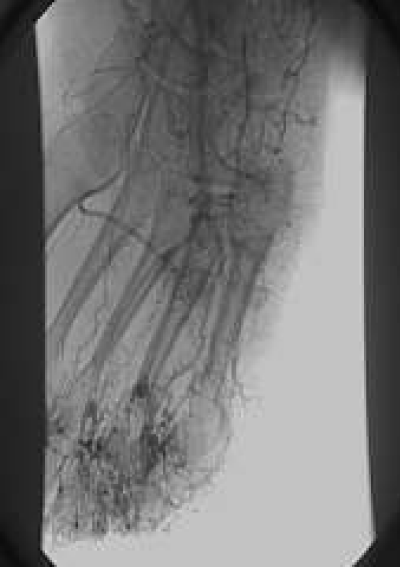 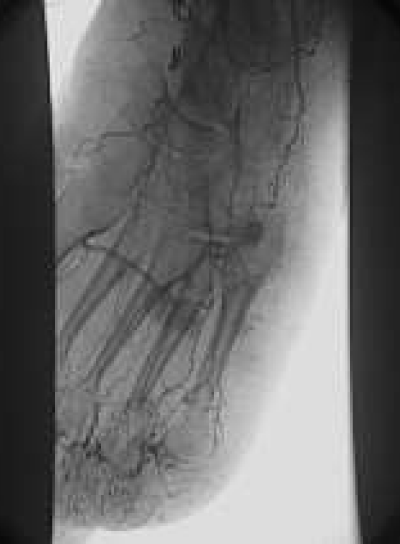 One major complication: right leg amputation, no procedure related mortality, infection, or renal failure as a result of muscle necrosis, or permanent nerve injury were reported.

Ethanol and coil has proved its efficacy in the management of congenital vascular malformations. Ethanol has the unique ability to induce protein denaturation of the endothelial cells, with subsequent vessel wall denudation and thrombus formation. This results in complete obliteration rather than simple obstruction of the vessel lumen and does not allow recanalization because ethanol permanently damages the endothelium of the AVM nidus. Thus, ethanol embolization of AVMs is associated with excellent results and outcomes, as well as an increased chance for cure [5-9].

For localized CVMs, a single embolization procedure may be sufficient. Embolization of extensive, complex AVMs, however, requires multiple procedures for many reasons.

In patients with a dilated dominant outflow vein, we performed coil embolization. Coil embolization decreases blood flow velocity, which can reduce the amount of ethanol used [10].

To prevent these complications, super selective catheterization should be performed. The catheter should be placed near the nidus, which should be abolished as many as possible. If only feeding arteries are occluded, it will be very difficult to repeat embolization, like surgical ligations [11]. In our experience, repeated embolotherapy is preferred at a one month interval when there is absent or minimal enlargement of collaterals.

We attempted as much as possible to perform embolization by the transarterial approach. Yet, very tortuous vascularity or the presence of adjacent major arterial branches made it necessary to perform additional transvenous or percutaneous embolization [12].

In conclusion, ethanol or coils embolization are an effective treatment for congenital vascular malformations with a high cure rate based on our experience. However, there is a chance of complications with the use of ethanol. It is mandatory to perform long-term follow-up for patients and to accumulate more experience with this technique to lessen the complication rate.

There are some limitations in our study. First, even though our treatment results were good, the number of cases was small. Second, in most cases we used ethanol or coils rather than another embolic agent, and finally if we had treated a larger number of congenital vascular malformations, then a comparative study with other embolic agents might have been necessary and follow-up is necessary to evaluate the long-term efficacy and safety of this treatment technique.