Copyright License: © 2019 Lasheen M, et al. This is an open access article distributed under the Creative Commons Attribution License, which permits unrestricted use, distribution, and reproduction in any medium, provided the original work is properly cited.

Background: Minigastric bypass is gaining popularity worldwide as an effective bariatric surgery which has fewer complications than RYGB. There is raising concerns about biliary reflux and its effect on gastric mucosa. In this study we tried to find the link between the presence of bile in the stomach and the incidence of gastritis after MGB.

Methods: This prospective study was conducted in Ain Shams university hospitals from January 2017 to May 2018 including 40 patients. All patients underwent MGB with a 12-month follow-up, UGI endoscopy was performed 9 months after MGB for all patients, where multiple biopsies and gastric aspirate were obtained for bilirubin level

Results: Mean age at operation was 32 years (18–60) and preoperative BMI 44.31 kg/m2. The mean operative time was 95 (± 18 min), Mean % EWL was 81.2% at 12 months. Complete resolution occurred of hypertension in 8 patients (80%) and of Diabetes type 2 in 11 patients (84.2%). Level of bilirubin in gastric aspirate was elevated in 8 patients (20%) all of them had different levels pouch gastritis confirmed by histopathological examination.

Conclusion: Biliary reflux reached about 20% after MGB, the severity of biliary gastritis is related to the elevation of bilirubin level in the gastric aspirates, this results need to be confirmed by further studies on the MGB.

Minigastric bypass is gaining more and more popularity among bariatric surgeons as an effective surgery for weight loss. It was firstly performed by Dr Rutledge in 1997 [1]. MGB is simpler and has fewer complications than RYGB, with good results regarding weight loss and the effect on type 2 diabetes [2,3]. However there is a great concern about the reflux of the bile from the jejunum to the stomach or even the esophagus [4,5]. There is a controversy about the incidence of gastric metaplasia, dysplasia, due to the effect of biliary reflux [6]. This study is, therefore, aiming to evaluate the incidence of biliary reflux after Laparoscopic Mini Gastric Bypass and its effects on the mucosa of the esophagus and the gastric pouch using upper gastrointestinal tract (GIT) endoscopy.

This prospective study was conducted in Ain Shams university hospitals after approval of ethical committee from January 2017 to May 2018 including 40 patients’. All patients underwent MGB using the same surgical technique. During Preoperative workup, detailed history was taken and physical examination, blood tests, Pelvi-abdominal ultrasound, Chest x-ray, Echo, Pulmonary function test and Upper GI endoscopy were done. Patients with previous operation in the stomach and Patients with reflux gastritis were excluded from the study.

All patients age ranged from 18-60 years with BMI ≥ 40kg/m2, or between 35 and 40 kg/m2 with obesity-related disease. Patients who were unfit for general anesthesia or had a history of personality disorder, drug or alcohol addiction, had a recent cardiac attack or advanced malignancy or underwent a previous bariatric surgery were excluded from our study. In addition, patients who had any upper gastro-intestinal endoscopic abnormalities such as reflux esophagitis, gastritis, peptic ulcer or duodenitis were also excluded.

All patients were informed regarding surgical technique and likely complications. Informed consent was obtained from each patient. Prophylactic antibiotics and deep venous thrombosis prophylaxis were given. The patients were followed up after one week then 3, 6,9,12 months after surgery. Upper GI endoscopy was performed in all patients 9 months after the operation.

Under general anesthesia Patients were positioned with legs apart in Anti Trendelenburgh position. Abdominal insufflation pressure was set at 15 mmHg. Five trocars were used and placed as follows: a 10-mm camera trocar 2 hand breadth below the xyphoid process, 5-mm trocar on the left anterior axillary line, a 12-mmtrocar on the left midclavicular line between the first and the second trocars, 12-mm trocar on the right midclavicular line and 5 mm trocar paced 2 centimeters below xiphisternum for liver retraction. After creating a window in lesser omentum, stapling is then started 2 cm distal to crow’s foot in a horizontal direction from the right 12 mm port. Then a long gastric pouch is created using 40 for bougie using blue loads from the left 12mm port. After that counting 200 cm from the ligament of Treitz is done before performing end to side gastrojejunostomy, then the entrotomy is closed using continuous sutures.

Leak test is done using methylene blue and air test. An 18fr Nelaton drain is placed before closure of the muscles at the site of 12mm ports, and then skin closure is done. Patients were kept on NPO for 24h and on intravenous fluids, antibiotics, analgesics, proton pump inhibitor and anticoagulants in a prophylactic dose, oral gastrograffin study is done in the first postoperative day, then oral intake is started, patients were discharged in the second postoperative day after drain removal. Upon discharge, a proton pump inhibitor was prescribed for at least the first three months after operation and daily multi-vitamins and supplemental minerals were recommended for life.

Patients were informed to come for follow up one week after the surgery then after 3, 6, 9 and 12 months.

During each visit patients were evaluated through full clinical assessments, weight loss measurements and full assessments for symptoms of biliary reflux i.e. upper abdominal pain, frequent heartburn or burning sensation in your chest that sometimes spreads to throat with a sour taste in your mouth, nausea. Vomiting of greenish-yellow fluid (bilious vomiting). Occasionally a cough or hoarseness of voice.

Upper GI endoscopy was done for all patients after 9 months where esophageal and gastric biopsies were obtained for histopathological examination and gastric aspirate was done for measuring bilirubin level.

Upper GIT endoscopy was done after nine months, it revealed normal gastroesphogeal mucosa in 27 patients (67.5%). While the rest of the patients, 10 patients had mild to moderate pouch gastritis and 3 patients had erosions with severe gastritis, mainly affected the perianstmotic area and the distal part of the pouch (Figures 1,2).

Bilirubin level in gastric aspirate it was within the normal level (1.28 mg/dl) in 32 patients (80%), 5 of them had pouch gastritis confirmed by histopathology. While the patients with elevated bilirubin level in the gastric aspirate were 8 patients (20%). All of them had pouch gastritis of different degrees, 6 of them bilirubin level was below 15mg/dl, and 2 was above 15 mg/dl. During the follow up, these 2 patients complained of repeated attacks of nausea, heart burn and vomiting and their follow up Upper GIT endoscopy after 3 month revealed severe gastritis with gastric erosion, while histopathological examination of the obtained biopsies revealed acute inflammation. 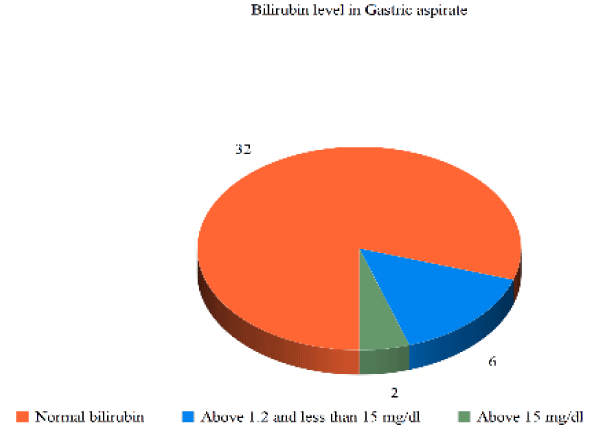 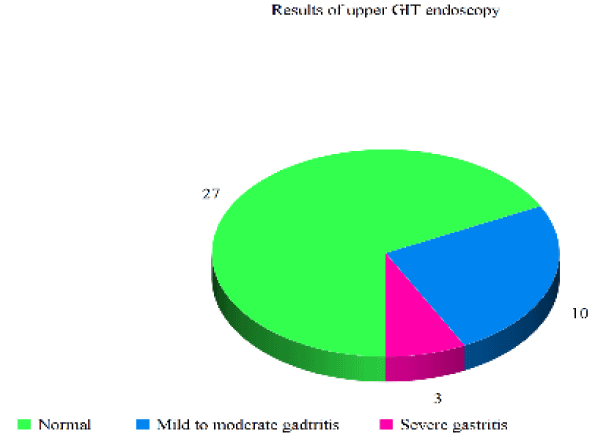 MGB is a better alternative to Roux-en-Y gastric bypass (RYGB), as it has a shorter operative time, only one anastomosis, with rare incidence of internal herniation, shorter learning curve, easily reversed, with equivalent or even superior results in terms of weight loss [7-10]. Although biliary gastritis after MGB was discussed in many studies, yet the measuring of Bilirubin level in the pouch and its effect on the mucosa was mentioned only in the study done by shenouda et al., they reported that the rate of biliary gastritis after MGB reached 30%, and this is correlated with the level of bile in the pouch, Among 20 patients, the EBWL 6 months postoperatively was 74% (60-84), with no mortalities ,and one case of calf DVT 2 weeks after discharge [11]. In 2017, Carbajo reported in his study that follow up UGI endoscopy after 5 years revealed, mild to moderate pouch gastritis (8%), but there were no worrisome endoscopic or histological changes, mean operative time was 86 min (45-180). The EWL was 88% after 2 years then 77% and 70% after 6, 12 years. Preoperative BMI was 46 kg/m2, which decreased to 26.6, 28.5 and 29.9 after 2, 6 and 12 years [12]. While in a study done by Mussella et al., they performed endoscopies in 26 symptomatic patients (3%) with prolonged dyspepsia, epigastric pain, heartburn, and vomiting, they discovered anastomotic ulcers (1.7%) and biliary gastritis (0.9%). The rate of conversion to open surgery was 1.2% (12/974), and there were 2 deaths out of 974 patients (0.2%). The mean hospital length of stay was 4.0 ± 1.7 days. After 5 years, the EWL was77 ± 5.1%, the T2DM remission was 84.4%, and the resolution of hypertension was 87.5% [13]. In the study done by Saarinen the mean age at operation was 56 years (41–65), the preoperative BMI was 43.1 kg/m2 (34.2–54.6), the mean % EWL was 83.9 (49.5–128.3) after one year. Out of 6 diabetic patients preoperatively, four patients reached diabetes remission and two became insulin-independent. Saarinen used both hepatobiliary scintigraphy and endoscopy for follow up after MGB. He concluded that after MGB transient bile reflux is common in the gastric tube as it reached 55% while the bile tracer was not found in the esophagus of any of the patients [14].

In our study 8 patients (20%) had elevated level of bilirubin in gastric aspirate, There UGI endoscopy revealed pouch gastritis, this was confirmed by histopatholgical examination of endoscopic biopsies. the patients with highly elevated bilirubin level had gastric erosions with severe inflammations .Mean age at operation was 32 years (18–60) and preoperative BMI 44.31 kg/m2. The mean operative time was 95 (± 18 min). Mean % EWL was and 81.2% at 12 months. Complete resolution occurred of hypertension in 8 patients (80%) and of diabetes type 2 in 11 patients (84.2%).

In our country availability of upper GIT endoscopy as routine investigation after MGB was one of limitations in this study due to its cost however presence of endscopist in our team make it more visible. Also unavailability of impedance ph metry was another limitation as it can confirm our results.

Biliary reflux was noticed in 20% of our patients after MGB in this study, the severity of biliary gastritis was noticed in patients with higher bilirubin level in the gastric aspirates, this results need to be confirmed by further studies after MGB surgery.