Copyright License: © 2018 Abdelhamid M, et al. This is an open access article distributed under the Creative Commons Attribution License, which permits unrestricted use, distribution, and reproduction in any medium, provided the original work is properly cited.

Patients undergoing laparoscopic surgery had a lower incidence of major complications, such as anastomotic leak, intra-abdominal bleeding, abscess, and evisceration. Controversies about the operative management of left colonic emergencies are decreasing. Nowadays there is worldwide shifting towards primary resection, on table lavage and primary anastomosis. The aim of this study is to record the safety of laparoscopic primary anastomosis in left-sided colonic emergencies.

Patients: The study was carried out at Beni-Suef University Hospital, in the period between January 2016 and July 2017. Twenty-six patients were included in this study, twelve with left colon cancer, twelve with left colonic complicated diverticulitis and two cases with sigmoid volvulus. Patients presented clinically with either obstruction or perforation. All patients were subjected to laparoscopic resection, on table lavage and primary anastomosis.

Method: Decompression was done prior to starting the intervention, followed by resection and on table lavage then colorectal anastomosis using the circular stapler. The study was approved by the ethical committee in the faculty.

Leak: one in obstruction group and two in perforation group.

Redo one in perforation group.

Conclusion: Emergency laparoscopic left-sided colonic resection and primary anastomosis can be performed with low morbidity, however with caution if there was free perforation with peritonitis

The surgical management of left-sided large bowel emergency patients still remains controversial. There has been an increasing trend towards primary reconstruction surgery, yet the main dilemma remains about the appropriate patient selection for primary anastomosis [3]. Resection and primary anastomosis when correctly indicated, and in the hands of an expert surgeon, gives complications and mortality rates similar to the staged surgical procedure, yet gives a better life quality [4]. In patients requiring emergency colonic resection, intraoperative antegrade colon lavage with primary anastomosis, as described by Dudley in 1983, represents a safe alternative to the staged procedure, achieving an excellent mechanical bowel toilette that allows a safe anastomosis and avoids the disadvantages associated with the multiple staged operations [5]. Large bowel obstruction is due to colorectal carcinoma in 90% of cases. The optimal management of obstructing left colonic carcinoma still remains a controversial issue. In cases of obstructing left colorectal cancer, an experienced skilled surgeon can perform one stage resection anastomosis on patients with good general condition [6]. Emergency primary anastomosis in left-sided disease can be performed with a low morbidity and mortality in selected patients, even in the presence of a free perforation with diffuse peritonitis. Patients selected for staged resection are those with major comorbid disease [3].

Twenty-six patients have been included in the current study. All patients were left-sided colonic emergencies presenting at Beni-Suef University Hospital during the period between January 2016 and July 2017. All patients were admitted as emergency cases, subjected to detailed history, physical examination and laboratory and radiological examinations. Resuscitation, nasogastric decompression, correction of any abnormality and evaluation of any associated comorbidity were all undergone. Computed tomography was done selectively to confirm the diagnosis in equivocal cases.

Patients were separated into two main clinical patterns. Obstruction was the main presentation to the left-sided colonic emergencies below the splenic flexure, while perforation or leak was the presentation of the other clinical pattern. It was defined as localized if there was a pericolic abscess, pelvic abscess or retroperitoneal collection (Hinchey I & II). It was defined as free if penumoperitoneum was evident on the abdominal x-ray film or if the feculent intra-peritoneal content was observed at operative exploration (Hinchey III & IV).

I. Bowel decompression was done once the abdomen has been entered, irrespective of the site of the lesion. The caecum was inspected to make sure a perforation has neither taken place nor was imminent, and a large Foley catheter was placed through the appendix stump. This was done in cases where the caecum was not hugely distended, and in cases where it was that a wide needle was inserted in a valvular manner proximal to the lesion to deflate the colon. This should be superficial to the fluid present in the colon to guard against needle obstruction. Dissection was performed in the majority of patients by bipolar vascular sealing devices (ligature device). Vessels were controlled with a bipolar vascular sealing device or metallic clips intra-corporeally in most circumstances.

II. Dealing with the lesion, with a closure of the distal end with the straight stapler, and extraction of the specimen through a left iliac incision, with the delivery of the proximal cut bowel.

III. On table orthograde bowel lavage: A long length of pre-sterilized anesthetics scavenging tubing was attached very firmly to the proximal cut end. Normal saline was warmed to body temperature and then irrigated into the proximal colon through the Foley catheter. 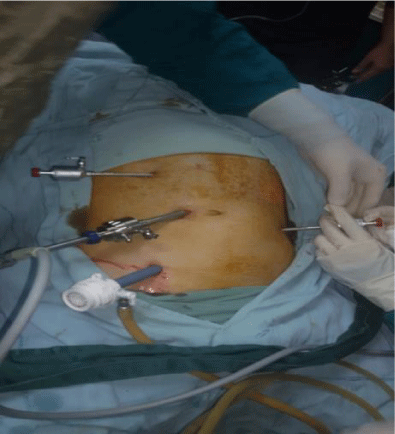 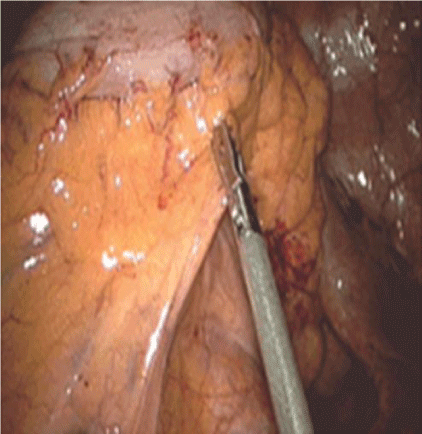 Figure 2: Dissection of the sigmoid colon. 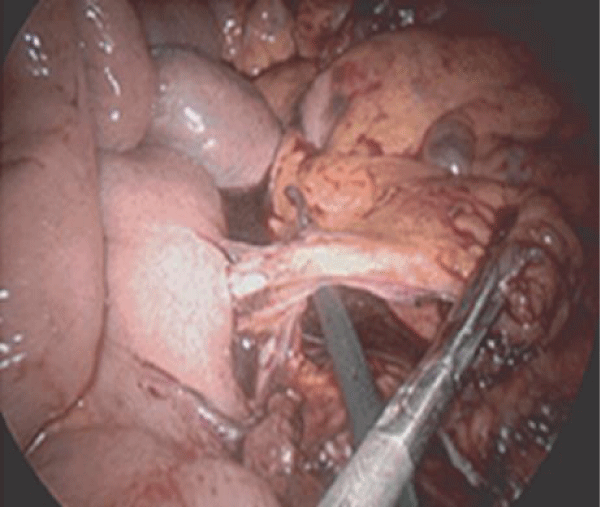 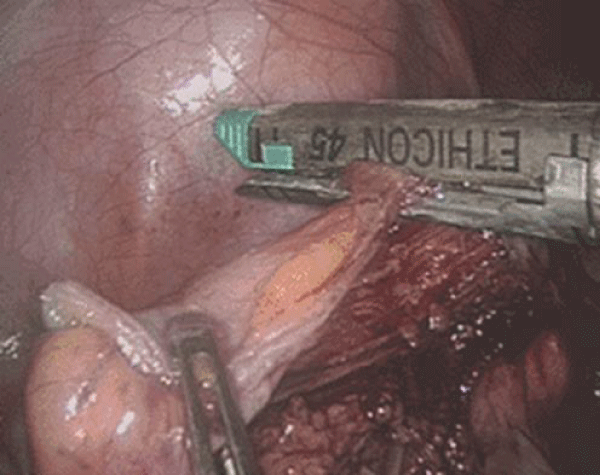 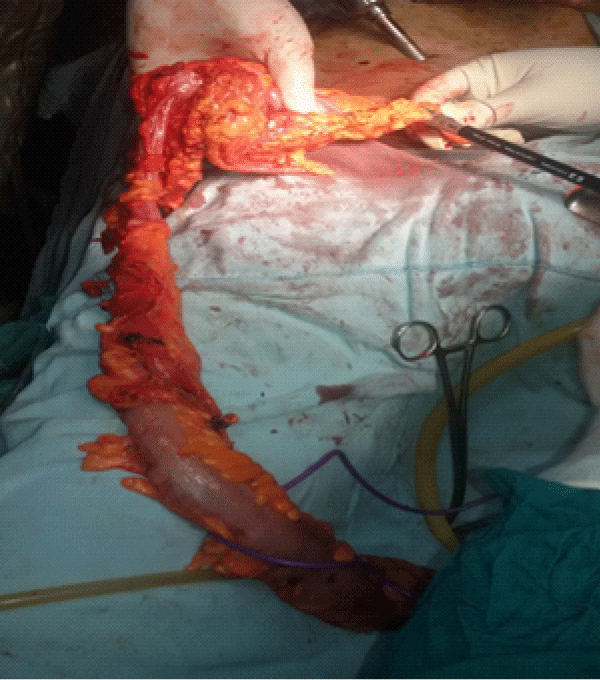 Figure 5: Delivary of the speciemen. 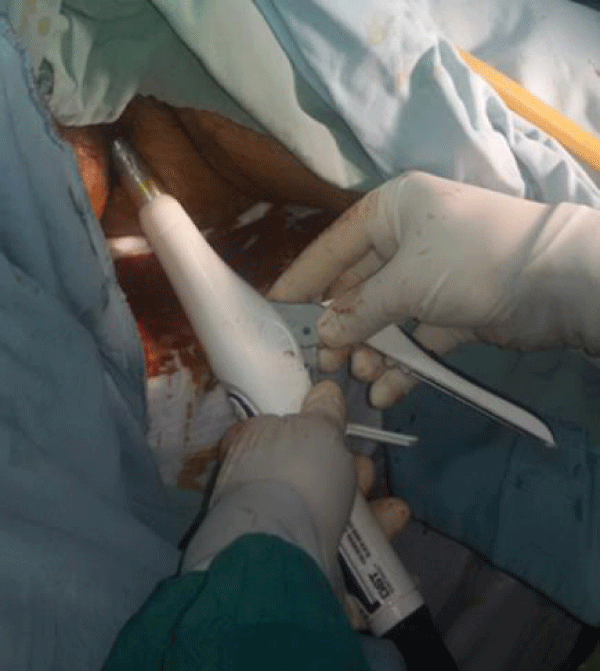 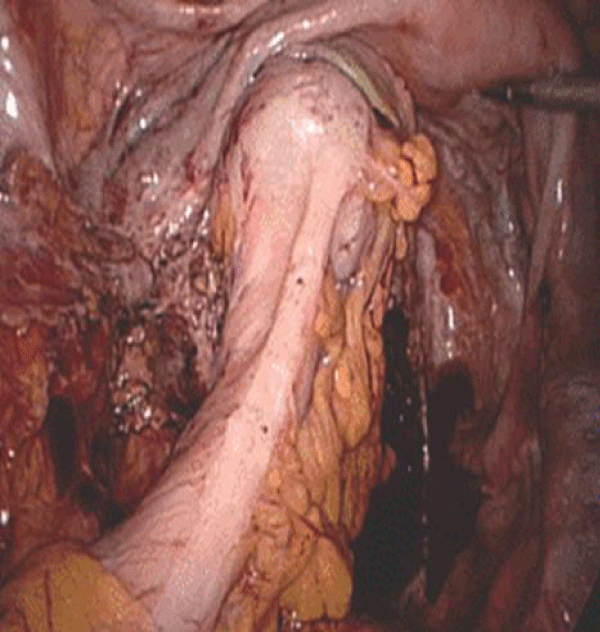 The perforation cases were 10 (38%), all of which presented with a picture of acute abdomen. 7 perforation cases had local peritonitis, and another 3 had free perforations. Table 3 All 10 cases had complicated diverticulitis. Regarding the complications, in the obstruction group, there was one (6%) with a minimal leak which stopped on conservative treatment. Meanwhile, regarding the complications in the perforation group, there were two (20%) leaks, one of which was with local peritonitis which improved on conservative treatment, and the other case necessitated conversion to Hartmann. The mean operative time was 185 min (160- 245). The LOS was 12 days (10- 18). The incidence of a leak was one in the obstruction group and two in the perforation group.

The redo incidence was one in the perforation group.

To date, the operative strategy for left-sided large bowel obstruction remains controversial. Taking in consideration that a safe and definitive single-staged operation that avoids a colostomy, would definitely be in the patient’s best interest, every effort should thus be done to perform a primary anastomosis [10]. Once obstruction and perforation were considered as absolute contraindications to primary resection and anastomosis, yet, the paradigms in the surgical management of obstruction and perforation of the left colon are changing. In the older age group, left-sided colonic emergency cases usually present with many comorbid diseases [11].

From the practical point of view, left-sided colonic emergencies should be classified as perforating or obstructive. All the same, in many situations of this current study, it was difficult to give an accurate diagnosis through the conventional preoperative diagnostic tools, and even by computed tomography. This was most obvious and pronounced in diverticular obstruction, which mimics to a great extent malignancy. This condition called for a need for histopathological examination to do this differentiation. Thus, the patients were accordingly classified into two main groups, an obstruction group which was compromised of 16 cases (62%) and a perforation group which was compromised of 10 cases (38%). This pattern is almost equivocal to that of Meyer et al. [16], who reported that the incidence of obstruction cases was 72.3%, and incidence of perforation cases was 27.7%. Still, Biondo et al. (18), reported an equivocal incidence of 45% peritonitis cases and 55% of obstruction cases. On the other hand, our study showed that 87.5% of obstruction cases was due to non-diverticular causes and 12.5% of the obstruction cases were due to diverticular complications. These findings were similar to those of Meyer et al. [16], who reported an 84.5% incidence and 15.3% incidence respectively.

Some coworkers stated that even resection and primary anastomosis can be performed safely without mechanical bowel preparation in sigmoid volvulus. Such a procedure has the merit of being a shorter and simpler procedure to perform, without any increasing morbidity or mortality [19]. Still, primary resection and anastomosis with manual decompression seem to be the procedure of choice [20].

Due to all the above-mentioned reasons, laparoscopic surgery has become the gold-standard procedure over the past decade. However, an increasing number of patients are still treated by sigmoidectomy and primary anastomosis, or by laparoscopic peritoneal lavage alone [21]. In addition to equivalent oncologic outcomes, multiple clinical trials have consistently shown lower peri-operative mortality rates. Multiple clinical trials have also shown fewer wound complications, less blood loss and reduced postoperative pain scores with a reduction in narcotic requirements after laparoscopic surgery. In spite of early concerns over port-site metastasis, cancer recurrence in wounds is reported to be similar to the 0–1% rates which are reported in open surgery. As laparoscopic lavage was not superior to sigmoidectomy, with regard to long-term major morbidity and mortality, other strategies such as laparoscopic sigmoidectomy need to be investigated [22]. Lately, the laparoscopic approach for generalized peritonitis is gaining acceptance for an increasing number of indications including cholecystitis, appendicitis, perforated peptic ulcer and small bowel obstruction [23]. Still, many surgeons regard general peritonitis, and especially fecal peritonitis, as a contraindication for a laparoscopic approach. This belief is related to a hypothetical risk of increased bacteremia and hypercapnia resulting from the pressure of the pneumoperitoneum [24]. Such a theory has neither been verified nor invalidated, but the experience gained with laparoscopic treatment in abdominal sepsis of various causes does not back this hypothesis [25].

Emergency laparoscopic left-sided colonic resection and primary anastomosis can be performed with a low morbidity but with caution in the presence of a free perforation with peritonitis, although it is linked with a high cost.