Actinomycosis of the appendix

Copyright License: © 2018 Wheatley L, et al. This is an open access article distributed under the Creative Commons Attribution License, which permits unrestricted use, distribution, and reproduction in any medium, provided the original work is properly cited.

A 40 year old woman presented to the emergency department with acute on chronic abdominal pain in her right iliac fossa. On history her pain had been present for over 6 months and had previously been investigated with ultrasound, CT and a diagnostic laparoscopy several months prior to presentation. Her pain had acutely worsened over the preceding two weeks. This was associated with two days of diarrhoea but nil other systemic symptoms. Her medical history was significant for immunosuppression with tacrolimus, azathioprine and prednisone post renal transplant for IgA nephropathy [1]. Her abdominal examination was unremarkable other than tenderness in her right iliac fossa and a palpable non-tender renal transplant. Her inflammatory markers, electrolytes and urine microscopy were unremarkable. She was further investigated with an ultrasound which demonstrated nil complications with her transplant and a non-contrast CT (due to contrast allergy). Her CT demonstrated a faecolith within the appendiceal lumen but no signs of acute appendicitis (Figure 1). Due to ongoing pain and CT finding of faecolith she was taken for a diagnostic laparoscopy with appendicectomy. 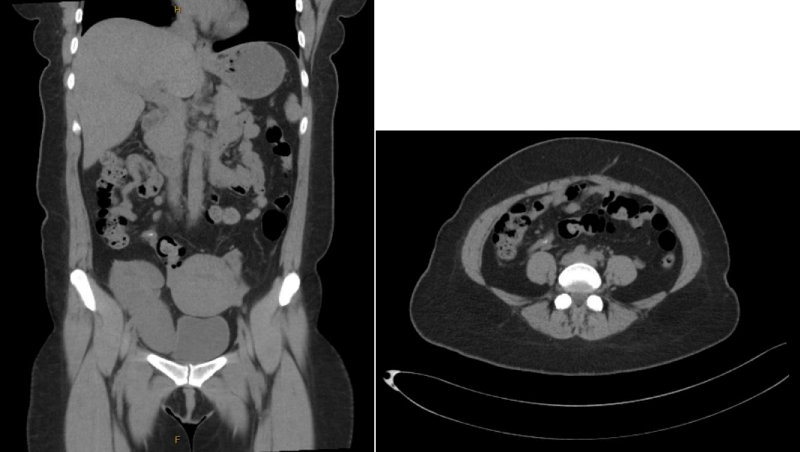 Intraoperatively she had a macroscopically normal appendix and no other cause for the patients symptoms could be identified. A laparoscopic appendicectomy was performed with no complications. Her pain persisted postoperatively and she was discharged post operative day two with analgesia. Histology subsequently revealed actinomyces-like organisms consistent with actinomycosis of the appendix (Figure 2). Her case was discussed with the Infectious diseases team and she was started on an extended course of oral amoxicillin [2].

Actinomycosis is a rare chronic infection caused by actinomyces, a gram positive facultative anaerobic organism. Actinomyces is a ubiquitous soil organism but also normally colonises the human oral cavity, upper respiratory tract, gastrointestinal tract and vagina. Actinomycosis occurs when normal host barriers are disrupted allowing for disseminated infection. Actinomycosis most commonly affects the cervicofacial, thoracic and abdominal regions. Abdominal actinomycosis may affect any organ but is most prevalent at the ileocolic region with most cases diagnosed following appendicectomy for presumed appendicitis. Although most frequently confined to isolated case reports and case series, several larger studies have estimated the prevalence of actinomycosis at 0.02-0.06% of cases of appendicitis. The clinical presentation is varied, ranging from acute appendicitis or abscess formation to infiltrative ileocaecal masses [3]. Diagnosis is confirmed histologically with demonstration of granulomatous inflammation, extensive fibrosis, sulphur granules and identification of actinomyces organisms. Treatment usually consists of high dose intravenous penicillin followed by a prolonged oral course often for 6 months to ensure eradication of any residual infection and prevent disseminated disease.