Archives of Cancer Science and Therapy

Copyright License: © 2019 Tayyeb A, et al. This is an open access article distributed under the Creative Commons Attribution License, which permits unrestricted use, distribution, and reproduction in any medium, provided the original work is properly cited.

The ovarian serous Cystadenocarcinoma shared large number of deaths in gynecologic carcinoma. It has various numbers of molecular events from initiation to progression and at advance stage, surgery is the end product of such molecular signaling. We assess in this study the whole mechanistic view of TNFSF10 network which has the ideal apoptotic causing identity. We used fresh insilico strategy to uncover the secrets and inter-links from its protein-protein interaction complex. We retrieved the TNFSF10 signaling network from STRING database (www.string-db.org). The network contains 25 nodes and 152 edges with clustering presentation. After retrieval, we performed gene enrichment and characterization analysis of network from WebGestalt toolkit (www.webgestalt.com). Finally, we examined the participation of whole network in ovarian cancer progression from cBioPortal, a cancer genomic data portal (www.cbioportal.org). Our results showed that majority of cases have loss of function of death receptors (DR4 and DR5) that are the main unit of initiation of apoptotic signaling. Most of downstream signaling members showed amplification that regulates cell proliferative pathways including NFkB pathway. TNFSF10 cluster has loss of function and in future it gain attention for further research studies to discover its interactome level view for valuable therapy. FAS cluster has large number of members and majority showed amplification rendering them as co-targets for combinational drug designing.

Tumor Necrosis Factor Super Family 10 (TNFSF10) is a member of TNF super family positioned on chromosome 3 that code protein of 20kDa which consist of 4 intron and 5 exon. TNFSF10 protein has 281 amino acids regulated mainly as a transmembrane protein and releases protein as a soluble form after C-terminus cleavage [1-3]. The primary function of TNFSF10/TRAIL is the induction of apoptotic process in transformed cells and mostly functional in immune cells [4-6]. TNFSF10 trigger the extrinsic apoptotic mechanisms by binding with death receptor 4 (DR4) and death receptor 5 (DR5). It also regulates NFkB and MAPK8 pathways that play key role in cell survival and growth [7]. TNFSF10 perform vital role in development of death-inducing signaling complex (DISC) that contains CFLAR, FADD, CASP8 and death receptors [8]. In carcinogenesis metastatic cells block the function of TNFSF10 of DISC development by inhibition of decoy receptors including DCR1, DCR2, OPG (Osteoprotegerin) and overexpression of anti-apoptotic agents like BIRC2, CFLAR and NFkB [9-11]. Some studies explore TGM2, EGFR, MCL1 and PTGS2 pathways that counteract TNFSF10 activity [12,13].

To study the fundamental significance of TNFSF10/TRAIL in progression of ovarian carcinoma we practice novel insilico approach to determine not only its individual expression but also with network level holistic view. In this approach we uncovered pathway interactors to find out therapeutic targets.

We retrieved TNFSF10 signaling cascade from STRING database (www.string-db.org) which is huge collection of protein-protein interaction networks with different topological, ontological and statistical tools that perform function on scoring pattern which showed the authenticity of a network. We process the enrichment and characterization analysis of a TNFSF10 cascade in WebGestalt toolkit (www.webgestalt.com) that gives us its ontological view with multiple characteristics for its deep understanding. We determined the cascade participation in disease progression by WebGestalt. Finally we use cBioPortal a cancer genome platform (www.cbioportal.org) that contains large number of cancer datasets with fine graphical presentation, enrichment tools, topological analysis tools and mutation identifiers that comprehensively find out oncogenic activities. 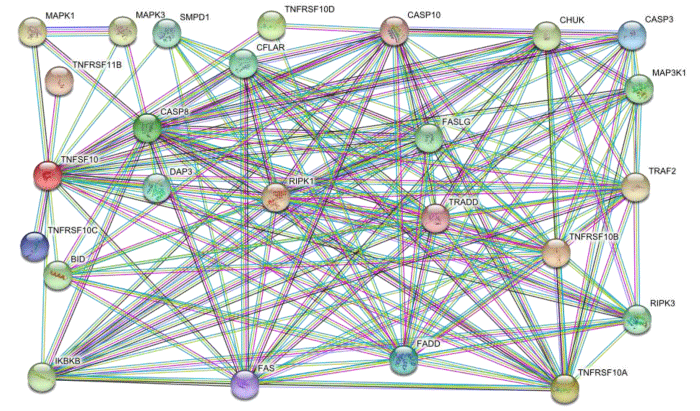 STRING database allowed us to draw functionally associated clusters that bind with each other in the form of inter cluster association and inside cluster association is intra cluster that showed the strength of interaction. The clustering of a network has enormous significance for drug targeting. We obtain 5 clusters by K-MEANS clustering algorithm of STRING database. First TNFSF10 cluster contain seven members including TNFRSF11B, TNFRSF10C, TNFRSF10A, TNFRSF10B, CASP3 and TNFRSF10D. Second IKBKB cluster contains five members including RIPK1, TRAF2, CHUK and MAP3K1. Third MAPK1 cluster has MAPK3. Forth SMPD1 cluster consist on only one member. Fifth CASP8 cluster is the largest cluster that contains ten members including FAS, BID, DAP3, CFLAR, FASLG, TRADD, FADD, RIPK3 and CASP10 (Figure 1.2). 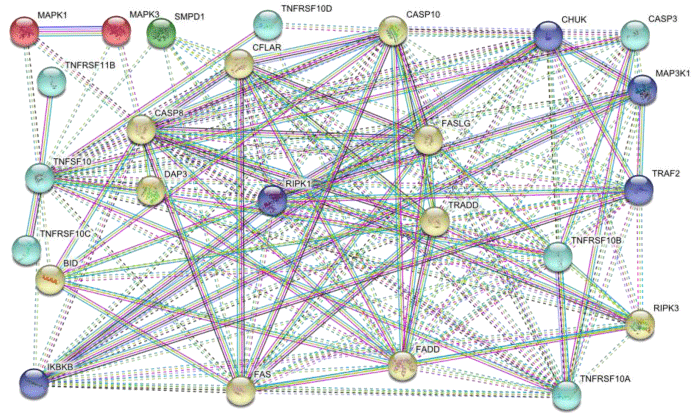 TNFSF10 signaling cascade components involved in most important programmed cell death process that help in organogenesis at embryonic level and encounter tumorigenesis. In apoptosis cell undergo certain steps that lead to its death in which cell stress causing autophagy is known as intrinsic pathway and due to cellular signaling cell death is called extrinsic pathway (Table 1.1).

TNFSF10 pathway components are involved in various molecular mechanisms to initiate apoptosis. They interact with death receptors, decoy receptors, Osteoprotegerin and development of DISC by web like binding with FADD, CASP8 and other pro-apoptotic ingredients (Table 1.2).

TNFSF10 pathway components are widely dispersed in cellular microenvironment from cell membrane to cytosol to mitochondria that trigger apoptotic signaling pathways that ultimately affect on gene regulation in nucleus (Table 1.3).

This is most appropriate result to understand the significance of TNFSF10 signaling components in disease causing and progression. This signaling network acts as a protective unit but due to its deregulation several viral and pathogenic problems are developed. The abnormal signaling observed in certain carcinomas and immune diseases (Table 1.5). 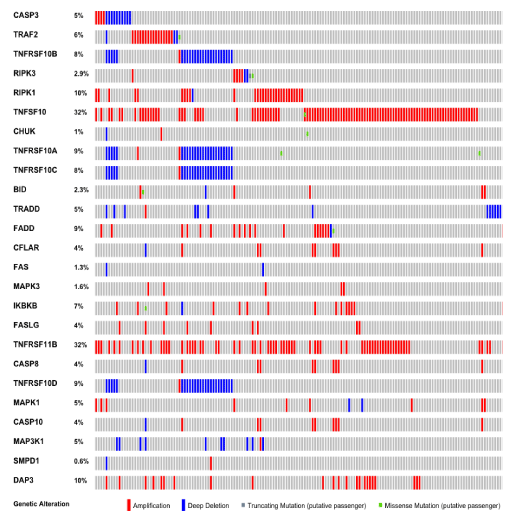 The process of eradicating the harmful cells through internal/external stimuli is called apoptosis that undergo two basic signaling pathways which are intrinsic and extrinsic pathways. In mitochondria Bcl2 proteins family trigger and regulate intrinsic pathway while TNF family with receptors trigger and regulate extrinsic apoptotic pathway [14-17]. Due to sequence similarity of TNF and FASLG extracellular domain first time TNFSF10 was explored that has four receptors of his own family that are TNFRSF10A/DR4, TNFRSF10B/DR5, TNFRSF10C/DCR1 and TNFRSF10D/DCR2. Both death receptors triggered apoptosis and decoy receptors inhibit TNFSF10 induced apoptosis [18]. TNSFSF10 interact with its death receptors on cell membrane that deploy FADD and CASP8 that developed DISC (death-inducing signaling complex). The deployment and activation of CASP8 trigger the regulation of CASP3 that initiate comprehensive apoptotic process [19,20]. The activated CASP8 also target the BID that undergo firstly in cleavage and then stimulate the BAX and BAK pro-apoptotic components that are releasing cause of Cytochrome C. The apoptosome development occurred by the combination of ATP, CASP9, Cytochrome C and APAF1 that trigger the cleavage of CASP3 that amplify the whole TNFSF10 induced apoptotic signaling [21-27]. Several studies reported the contribution of TNFSF10 mediated signaling cascade in meningitis, inflammation, diabetes, asthma, immune diseases and carcinogenesis [28-35]. In this work we apply fresh insilico procedure that determines the holistic view of TNFSF10 mediated apoptotic signaling complex. We interestingly identified TNFSF10 32% overexpression that is the possible effect of immune microenvironment interaction with ovarian tumor cells. This expression indicates the better survival of ovarian cancers which is the confirmation of earlier studies [36]. We determine that TNFSF10 death receptors showed loss of function in context of deletion that are located on chromosome 8 which undergo mostly loss of function due to deletion or mutation. They contain highly conserved region of 95 amino acids of death domains which interact with TNFSF10 and initiate apoptotic process. Their loss of function is reported in several carcinomas including head and neck, breast and lung carcinoma [37-42]. The deletion of death receptors finishes the ability of DISC development that is the organizer of apoptotic signaling [43]. Both receptors are functionally associated with each other and loss of function makes TNFSF10 functionally insignificant [44,45]. In ovarian serous carcinoma these are the key drug targets for normal development of DISC and tumor cells eradication. The decoy receptors showed deletion that normally heterotrimeric complex that prevent apoptosis via deactivation of CASP8 [46-49]. TNFRSF11B showed 32% overexpression which is secreted protein with lack of transmembrane domain and participate in inhibition of TNFSF10 mediated pathway [50]. More importantly CASP3 showed deletion in most ovarian serous carcinoma cases that is the end target of activated CASP8 for proper initiation of apoptotic signaling. TNFSF10 cluster contains mostly those members that undergo loss of function due to deletion so required further research to explore their network view that are the causing agent of deletion.

Our work determined the IKBKB overexpression that is the regulator of NFkB signaling pathway and required for IKBα/β phosphorylation [51]. The IKBKB cluster also has the overexpression of RIPK1 and TRAF2 that are the inducer of NFkB anti-apoptotic proliferative pathway [52,53]. This cluster explains the role of cell proliferation by NFkB signaling through amplified TNFSF10 expression. In this study the FAS cluster has large number of members that showed its functional diversity. FAS showed loss of function in context of deletion, it played a vital role in apoptotic signaling mechanisms of immune cells, destruction of cells by T-Cell-mediated pathway and its deregulation reported in various diseases [54,55]. CFLAR and FASLG both is negative regulator of TNFSF10 pathway that showed amplification in results. TRADD showed loss of function which is the main linker of FADD and downstream signaling activators of apoptosis [56]. FADD and CASP8 both showed amplification but due to loss of function of various TNFSF10 cascade key members they behave functionally inactive in pro-apoptotic context and prevent TNFR1 signaling [57-58]. The MAPK cluster showed overexpression that involved in cell survival and proliferation in response of various forms of stress.

Our study confirmed the dual and unique role of TNFSF10 mediated signaling in which they induce cell proliferation signals by overexpression of FADD, RIP1, TRAF2, IKBKB and CFLAR which ultimately activate the NFkB signaling pathway which further regulate ErK2, JNK, MAPK and PI3K signaling proliferative pathways. Several cancer studies reported such role in progression and promotion of metastasis [59-65]. In this approach we determined the TNFSF10 mediated signaling cascade participation in ovarian serous carcinoma and find interesting links of anti-apoptotic /proliferative channels. This effort addresses the basic theme of TNFSF10 signaling pathway and increase the comprehension of its patho-physiology before their therapy.

System biology deals the phenomenon based on inter-link events in which signaling cascades perform a major role in regulation of system level mechanisms. Day by day secretes of interactomics are uncovered by insilico studies. In this study we examined TNFSF10 signaling network to assess its core mechanistic view for its functioning in progression of carcinogenesis. Interestingly we identified several unique interactions that showed overexpression and promote cell proliferation which is the negative sign of this pathway. There is complex story of TNFSF10 network members that show diverse sensitivity to stress and mutagens. We analyzed the network on cluster based in which TNFSF10 cluster show maximum loss of function that is main cause of promotion of tumorigenesis and majority of members of all other clusters of network showed overexpression that promote cell survival and regulation of proliferative pathways. In future our study proved as a repository of markers for TNFSF10 network based drug designing.