Copyright: © 2019 Ocampo LA, et al. This is an open access article distributed under the Creative Commons Attribution License, which permits unrestricted use, distribution, and reproduction in any medium, provided the original work is properly cited.

Background: Several epidemiologic studies indicate that up to 50% of patients with heart failure have a preserved ejection fraction, and this proportion has increased over time. The knowledge of its severity and associated comorbidity is determining factor to develop adequate strategies for its treatment and prevention. This study was focus on the creation of a cohort and follow-up of Mexican population and to analyze its severity as well as its interaction with the comorbidity of other cardiovascular risk factors.

Methods: We included patients from different sites of Mexico City than were sent to the Cardiology hospital of the National Medical Center in Mexico City for the realization of an echocardiogram as part of their assessment by the presence of dyspnea, edema, or suspicion of hypertensive heart disease. Complete medical history, physical examination and laboratory studies including Brain Natriuretic Peptide (BNP) serum levels were performed. Diagnosis of diastolic dysfunction was based on symptoms and echocardiographic data including time of deceleration, size of left atrium, e´ septal and e´ lateral, as well as E wave, A wave and its ratio E/A. All patients had left ventricle ejection fraction > 45%.

Results: We included 168 patients with HFpEF. The most common risk factor was hypertension (89.2%), followed by overweight and obesity (> 78.5%), dyslipidemia (82.1%) and diabetes (42.8%). Women were dominant, 108 (64.3%); the mean age was 63 years old. When we classify by severity of diastolic dysfunction, we found that 41.1% were grade I, 57.1% were grade II and only 1.8% were grade III. The risk factors most strongly associated with the severity of diastolic dysfunction were hypertension, obesity and dyslipidemia. We found BNP levels highly variables, but the levels were higher detected as the ejection fraction was approaching to 45%. At one year of follow up mortality was not reported.

Conclusion: HFpEF is a frequent entity in patients with cardiovascular risk factors in Mexico. The most common risk factor was hypertension. The combination of hypertension, overweight and dyslipidemia predicted the severity of diastolic dysfunction. We recommend that all Mexican patient with hypertension and overweight or obesity should be submitted as a part of its medical evaluation to an echocardiogram study in order to detect diastolic dysfunction even though the signs or symptoms are or not evident.

HF with preserved EF (HFpEF) is characterized by a normal left ventricle ejection fraction (LVEF), normal LV end-diastolic volume, and abnormal diastolic function, often with LV concentric remodeling or hypertrophy, but sometimes with normal ventricular geometry. Most authorities currently define HFpEF by LVEF ≥50 percent. The dominant abnormality resides in diastole, but there are also abnormalities in systolic function, the left atrium, pulmonary vasculature, right ventricle, arteries, and skeletal muscle. However, in clinical practice, the diagnosis of HFpEF is often one of exclusion based on the finding of a normal or near normal (or "preserved") LVEF. As discussed below, HFpEF may be best defined as HF with LVEF ≥50 percent and evidence of diastolic dysfunction. Despite of various therapies improve survival in patients with HF and a reduced ejection fraction, no pharmacologic therapy has been shown to effectively reduce mortality in HFpEF patients. National registers and real world evidence studies have demonstrated a crucial relevance not only to pure medical study but also it can improve strategies for policy health [1-5].

Studies and cumulative evidence have shown that there is a third group of patients with mid-range LVEF (HFmrEF; 41 to 49 percent) that seem to share features of both HFrEF and HFpEF. While there are very few prospective trial data in this cohort, some data suggest that these patients have characteristics similar to those with HFrEF. Some experts treat these patients like HFrEF, while others treat these patients as borderline HFpEF [6].

Nevertheless, the prevalence of HFpEF increases with age. Among all patients with HF in the United States, half or more have a normal or near normal LVEF. A Mayo Clinic study examined all consecutive patients hospitalized with decompensated HF from 1987 through 2001. The proportion of patients with the diagnosis of HFpEF increased over time and was significantly higher among community patients than among referral patients (55 versus 45 percent). Over the next decade (2000 through 2010), the proportion of HF patients with HFpEF continued to increase while the incidence of HFpEF and HF with reduced EF declined. Additional data from the ARIC study show that HFpEF is by far the dominant form of HF among older adults in the United States, representing 65 to 77 percent of prevalent cases. This study also showed that the majority of adults in the community have either risk factors for HF (Stage A, 52 percent) or structural remodeling (Stage B HF, 30 percent) and are thus at increased risk for developing symptomatic HF (Stage C HF, 13 percent) [7-9].

Echocardiography is a key component of the diagnosis as well as evaluation of patients with suspected HFpEF. Echocardiography is helpful in demonstrating that the LVEF and left ventricular volume are normal. Other features that may be identified include left ventricular hypertrophy or concentric remodeling, left atrial enlargement, and evidence of diastolic dysfunction. Elevation in the pulmonary artery systolic pressure (PASP) estimated by echocardiography is very common in patients with HFpEF, and the identification of an elevated PASP in an older patient with dyspnea should trigger consideration for the diagnosis of HFpEF [10,11].

The fundamental pathophysiological perturbation leading to heart failure with a preserved ejection fraction remains incompletely defined, but traditionally it has been attributed to hypertensive left ventricular remodeling [12] (Figure 1). Systemic microvascular endothelial inflammation related to coexisting conditions has been proposed as an additional mechanism leading to myocardial inflammation and fibrosis, increases in oxidative stress, and alterations in cardiomyocyte signaling pathways. These alterations promote cardiomyocyte remodeling and dysfunction (Figure 1) as well as microvascular dysfunction and rarefaction in cardiac and skeletal muscle [13]. 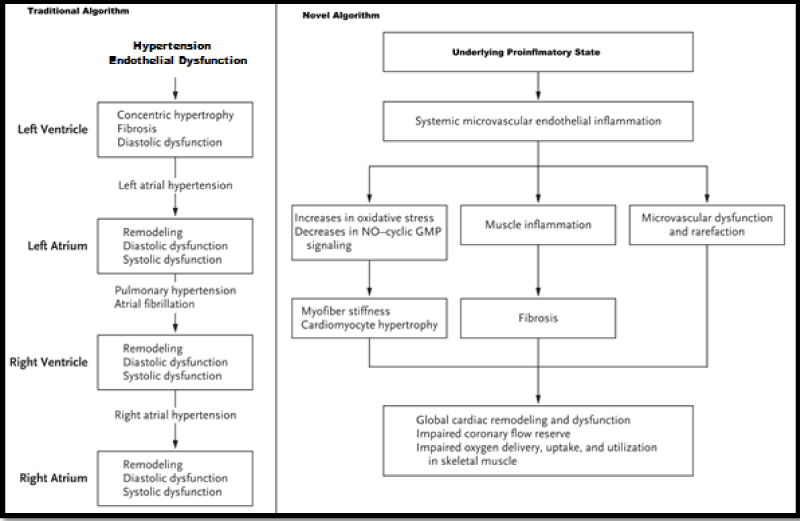 Since signs and symptoms of heart failure are nonspecific, clinicians should maintain a high index of suspicion for heart failure in patients with risk factors, but they also should consider alternative or contributing diagnoses. The clinical history should include ascertainment of reduced symptoms in response to diuretic therapy and previous hospitalizations for or complicated by heart failure. In some patients, heart failure manifests as “unexplained” exertional dyspnea. In such patients, differentiating heart failure from noncardiac dyspnea or deconditioning can be challenging. In patients with suspected heart failure, comprehensive Doppler echocardiography should be performed. The relationship between pressure-volume into the left ventricle is keystone of this disease (Figure 2). 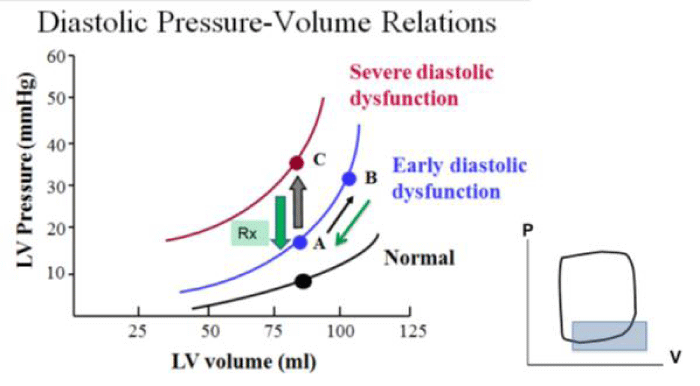 We included 168 patients from different hospitals in the metropolitan area of the Mexico City, who were sent for realization of Echocardiogram as part of their study protocol by dyspnea, edema or suspicion of hypertensive heart disease. All patients were evaluated in the Department of echocardiography at the Cardiology hospital of the CMN SXXI. Adults over 20 years old of both sexes were included. We investigate all cardiovascular risk factors known as arterial hypertension, diabetes, Dyslipidemia, and obesity. All signed informed consent we measured also levels of brain natriuretic peptide (BNP) in blood. (® Roche Labs,) A brief medical history and physical examination was performed. Patients with any known advanced comorbidity that threaten life or give false positive of BNP in serum were not included. Those patients with very bad window for Echocardiogram were eliminated. A complete study of two-dimensional and Doppler echocardiography, including ratio E/A, deceleration time, E/e´, atrial volume and morphology and mobility of the LV were recorded. The resulting annular velocities by pulsed wave Doppler were recorded for 3 to 5 cardiac cycles at a sweep speed of 100 mm/s. Measurements were performed on computerized off-line analysis stations without knowledge of invasively derived hemodynamic data. LV volumes, EF, and left atrial (LA) maximal volume were measured as recently recommended. Mitral annulus early diastolic velocity (e0) and late diastolic velocity were measured at septal and lateral mitral annulus and E/e´ ratios were computed. Diastolic degrees are showed in figure 3. 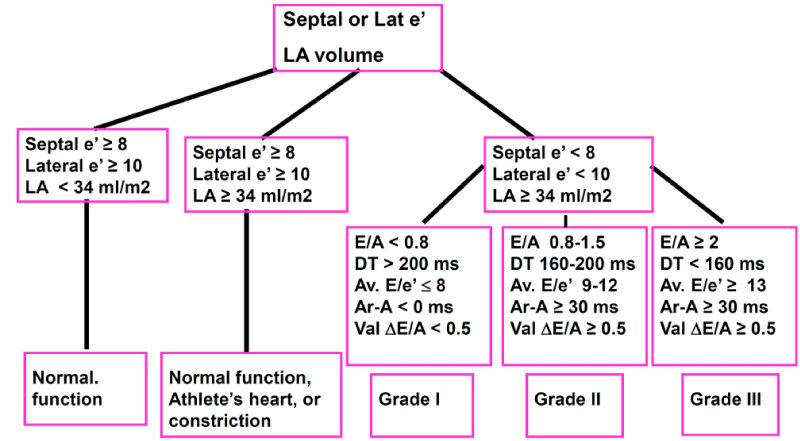 General characteristics of study population are shown in table 1. As other reports female dominated this group of patients, the average age was over 60 years old and majority had hypertension or diabetes. The most common symptom was dyspnea following by edema. Notably overweight and obesity were common (>75%).

From the total population, 42.9% were diabetic and 89% had hypertension. Most of them corresponded to the female sex. According to figure 2, 69 (41.1%) patients corresponded to Grade I of diastolic dysfunction; 96 (57.1%) shown grade II and only 3 patients (1.8%) were classified as grade III. Cuando estos grados de severidad de disfunción diastólica se evaluaron de acuerdo con el factor de riesgo cardiovascular se encontró: Ser diabético se asoció a mayor severidad de DD (34% and 66% vs no-diabetics 46% and 54% for grade I and II, respectively). Hypertension was the most important and frequent cardiovascular risk factor.

PCW was increasing as the severity of diastolic dysfunction was detected. Left atrium and global geometry of left ventricle was similar. Despite of non-statistical significance, E/e’ was higher in type II than type I, and the cutoff point to separate Type I of Type II were E/e’ lateral of 7.5 and 10.5 for septal E/e’ (Table 2). Grade II was more common in Type II pattern independently of cardiovascular risk factors.

In general, most studies have concluded that age is an important risk factor for HFpEF [3]. We found that the incidental cases of HFpEF were found at mean age of 63 years old, which was consistent with the result of a study conducted in other countries [15].

Nevertheless, we identified a very high rate of hypertension, overweight or obesity and Dyslipidemia. Diabetes was also highly prevalent. In Mexico the cardiovascular risk factors prevalence rate is higher in absolute numbers in population aged < 54 years, therefore we think that for when the symptoms of heart failure appears, It have passed at least 10 or 15 years of the onset of this chronic risk factors.

Regarding gender, in the present study, we found that women had a higher prevalence of HFpEF, which was in accordance with another study that found the age-standardized prevalence of HFpEF for women and men was 64.3% and 35.7%, respectively. The Rotterdam Study reported that the overall prevalence of heart failure was 3.9% and did not differ between men and women, but the prevalence of left ventricular systolic dysfunction (HFREF) was higher in men than in women [16-19]. Frank P. Brouwers et al. [20], found that female gender, atrial fibrillation, higher cystatin C, and urinary albumin excretion were particularly strong predictors for HFpEF. This is possibly because women are more likely to suffer from metabolic syndrome, which is characterized by hyperlipidemia, hypertension, diabetes mellitus, abdominal obesity [21], and stroke [22]. These diseases could increase the risk of HFpEF in women, as previously mentioned.

Our study found that participants with clinical comorbidities such as hypertension, dyslipidemia, obesity, and smoking had a higher association with HFpEF, consistent with the results from other studies [21-23]. Of note, renal dysfunction and cardiorenal syndrome were uncommon in patients with HFpEF, which might be related to protracted fluid retention and refractory hypertension [21]. Unlike the unalterable factors, such as age and gender, an appropriate treatment of the comorbidity could be crucial for the prevention of HFpEF. For example, hypertension is generally considered to lead to the development of HFpEF [23], which is consistent with our results. Hence, early diagnosis and treatment of hypertension was proven to be effective for the prevention of HFpEF.

In our study, Brain natriuretic peptide (BNP) or was checked and important findings were detected. As the ejection fraction was lower and closer to 45% higher levels of BNP were detected (Figure 4). 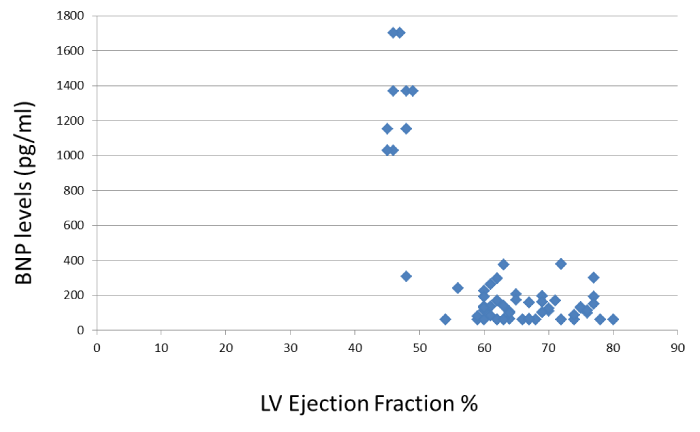 Figure 4: Relationship between Ejection Fraction and BNP levels in HFpEF.

HFpEF is a frequent entity in patients with cardiovascular risk factors in Mexico. The most common risk factor was hypertension. The combination of hypertension, overweight and dyslipidemia predicted the severity of diastolic dysfunction. We recommend that all Mexican patient with hypertension and overweight or obesity should be submitted as a part of its medical evaluation to an echocardiogram study in order to detect diastolic dysfunction even though the signs or symptoms are or not evident.