Annals of Civil and Environmental Engineering

Use of Geosynthetic materials in solid waste landfill design: A review of geosynthetic related stability issues

Copyright License: © 2018 Zhao L, et al. This is an open access article distributed under the Creative Commons Attribution License, which permits unrestricted use, distribution, and reproduction in any medium, provided the original work is properly cited.

Geosynthetics used in landfills provides a technical and economic advantages over traditional clay liners. It may create stability issue and even lead to landfill failure due to its low interface or internal shear strength if improperly designed and/or constructed. The most common failure mechanism in geosynthetic-lined landfills is transitional failure involving waste and bottom liner (deep-seated failure) or only final cover system (shallow failure). Shear strengths of geosynthetic-geosynthetic and geosynthetic-soil have a wide range of variations. Shear strengths of interface from literature may be used in preliminary design. For final design, site-specific interface shear strengths shall be used. Internal shear strengths of unreinforced geosynthetic clay liner (GCL) are less than those of reinforced GCLs. Unreinforced GCLs are not recommended for slopes steeper than 1:10 (1 Vertical and 10 Horizontal). Peak shear strength of interface and internal GCLs can be used in bottom liner; residual shear strength of interface and internal GCLs shall be used for geosynthetic placed along the slopes. Site-specific shear strengths of waste are recommended to be used in the design. Landfill failure could be triggered by static loadings including excessive leachate, pore pressure above the bottom liners, gas pressure, and excessive wetness of the geomembrane-GCL, and earthquake loading. The factor of safety of 1.5 is recommended for static loading and 1.0 for earthquake loading. A higher factor of safety is recommended if a failure could have a catastrophic effect on human health or the environment, and if large uncertainty exists in input parameters to calculate the factors of safety. The main objective of this review article is to provide a comprehensive knowledge of slope failure mechanisms, causes, and probable remedies in one place.

Geosynthetics are most commonly used in solid waste landfills to protect surface water and groundwater due to their multiple functions, excellent hydraulic properties, ease of installation, and cost saving [1]. Geosynthetic used in landfill include non-woven geotextile, woven geotextile, geogrid, geomembrane, geocells, geosynthetic clay liner (GCL), geonet, geocomposite, etc, and each geosynthetic type serves as specific functions. The functions that geosynthetic system can serve in landfill are separation, drainage, filtration, hydraulic barrier, gas barrier, and protection [1]. Table 1 summarizes geosynthetic types and their functions, and Figure 1 illustrates their use in landfills. Geomembrane, GCL, geopipe, and geotextile are more commonly used geosynthetic materials in landfill applications while geonet, geocomposite, and geogrid are used a lesser extent [1].

Figure 1: Geosynthetic Materials Use in Landfills [2].

While geosynthetic system provides huge economic and technical advantage over traditional liners, it may create stability issue and even lead to landfill failure if improperly designed and/or constructed. One of the most important problems associated with the use of geosynthetics for landfill linings is their stability. This becomes a very important issue by the fact that more and more landfills are designed and constructed with a small footprint and require moderate to steep slopes to raise their capacity [3]. There have been massive failures of landfills related to geosynthetic systems. For example, Koerner and Soong [4] reported five failed landfill sites that contained geomembrane liners with volumes from 60,000 to 1,200,000 m3. These landfill failures caused dramatic damage to the environment, and resulted in litigations and fines. The five failure scenarios are presenmted in figure 2. In this respect, evaluation of geosynthetic related stability is a critical consideration for landfill design, construction, and operation. As such, this review paper is concerned on failure mechanisms, shear strengths, triggering factors of geosynthetic-lined landfill failures and design criteria. 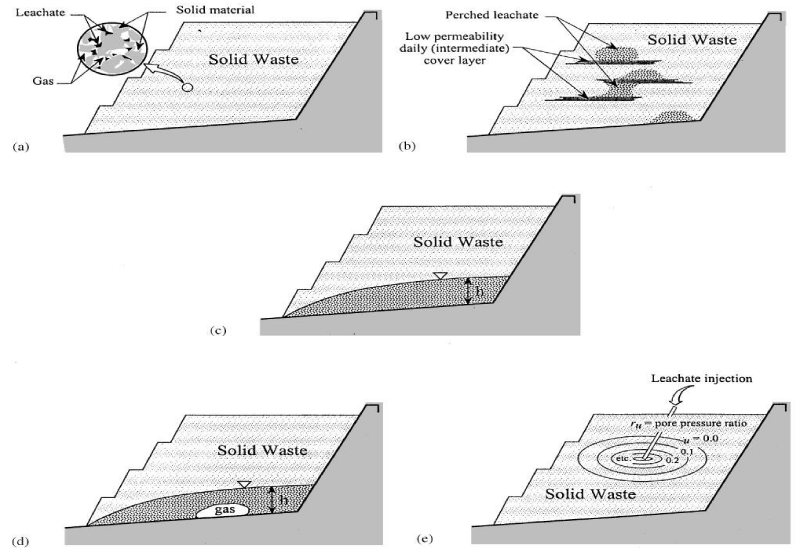 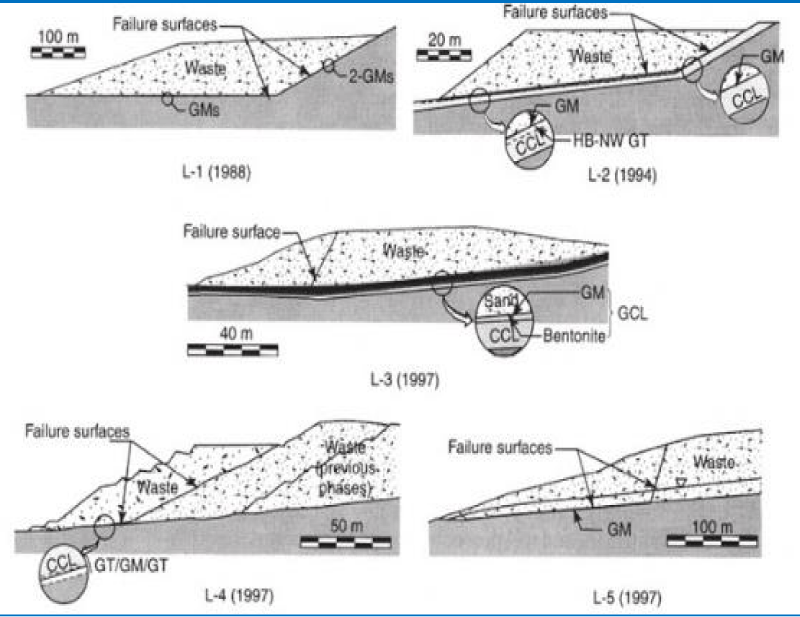 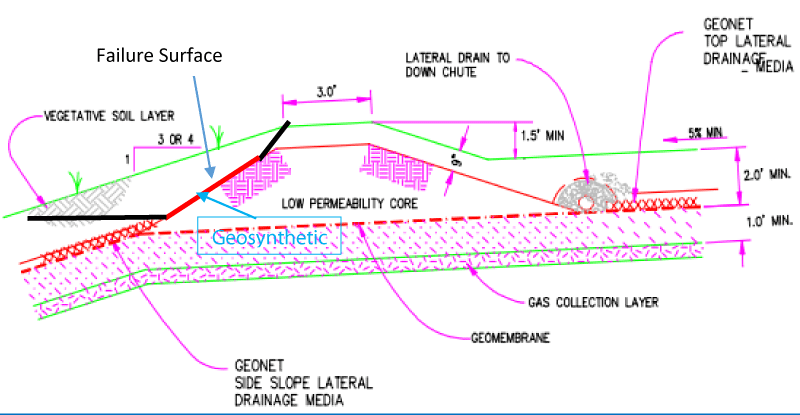 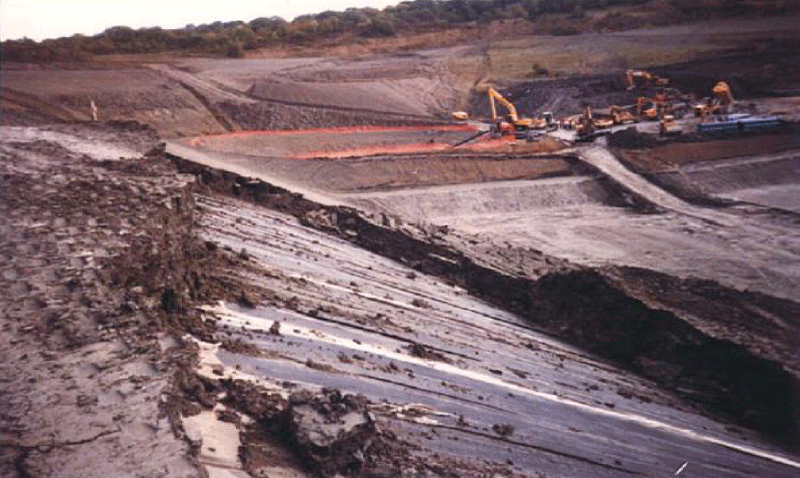 Richardson et al. [9], reported a shallow translational slide occurred during construction of one-six-hare final cover project. The slope on which the slide occurred is inclined at 14 degrees with an 1V:4H (1 Vertical and 4 Horizontal), and the slope is 60 feet high with no benches. The cover system consisted of topsoil, vegetative soil, drainage sand, polyvinyl chloride (PVC), geomembrane, GCL, and gas relief system from top to bottom. Failure of the cover system took place when the drainage sand layer. The sand above the geomembrane and the geomembrane moved downslope along the geomembrane/GCL interface [9]. The cover system failure was induced by a combination of low interface shear strength of geomembrane-GCL interface, excess pore pressure, and gas pressure below the GCLs [9].

The Kettleman Hill Landfill failure is one of the most famous deep-seated translational slide landfill failures, which has been extensively studied by various authors [3]. The Kettleman Hills Unit B-19, Phase 1-A landfill had an area of about 120,000 m2 and was part of a waste treatment and storage facility at Kettleman Hills, California. The landfill has straight-sided liner with an oval-shaped bowl, which had a nearly level base. The solid waste placement and soil cover construction began in 1987 and progressed at an essentially steady rate. The landfill slid on March 19, 1988, resulting in a lateral movement of the fill of 35 feet towards the southeast. The vertical displacement was up to 14 feet along the back of the sliding mass. Surface cracking and tears and displacement of the geosynthetic liner were clearly visible. The sliding mass slid along the liner system. There were no rain, earthquakes, or other triggering events during the failure. Many studies believe that the failure occurred because the waste fill placed on the top of landfill reached a height that created a marginal stability of landfill slope. Major reasons that could contributed this landfill failure include that (1) the friction angle could be as low as 8 degrees between layers of geosynthetic materials; the interface between geomembranes and compacted clay could have only a few hundred pound per square foot; (2) the over-wetness yielded a very ow shearing strength at geomembrane/clay interfaces; and (3) the conditions at which the liner interface strengths were tested were different from the field conditions, and the interface shear strengths could not represent the site-specific shear strength [3].

Slope failure in geosynthetic lined landfills, as discussed in the previous sections, could occur along the following weak planes: 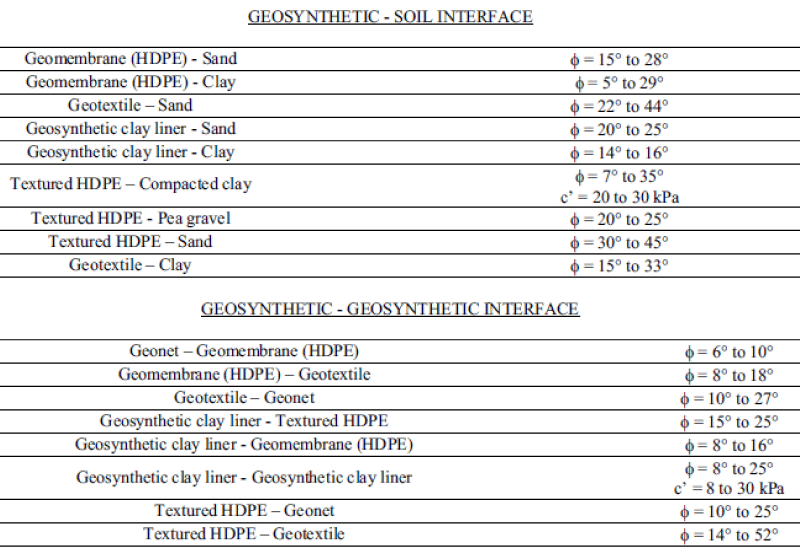 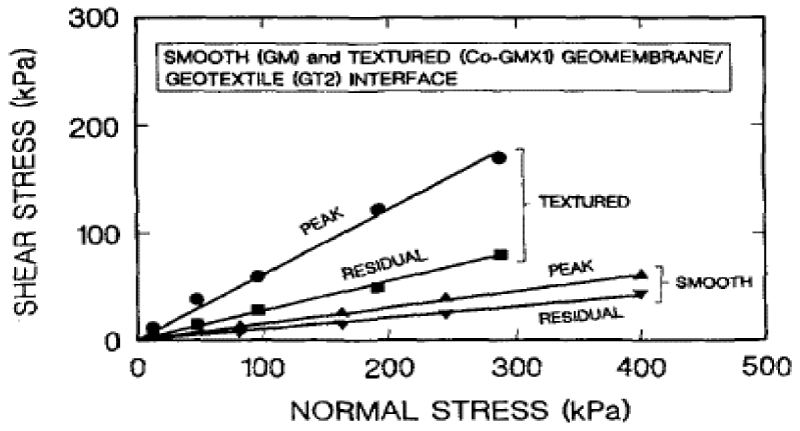 To increase the internal shear strength of GCLs, GCL manufacturers have created “reinforced” GCLs in which the two outer layers of geotextile are either needle-punched or stitched together through the bentonite layer [13]. Reinforced GCLs have greater internal peak strength due to the presence of fiber reinforcements. The peak shear strength of different types of reinforced GCLs (needle-punched, thermal bonded, stitch-bonded) may differ significantly [15].

The measured shear strengths obtained from the literature have a wide range. The reported friction angles range from 15 degrees to 42 degrees with cohesion ranging 0 to 28 kPa [8]. This large scatter is due to the large variety and heterogeneous of wastes, which results in the difficulties to obtain representative shear strength. Jones and Dixon [8] suggested municipal solid waste (MSW) shear strength envelopes for design as shown in figure 8. 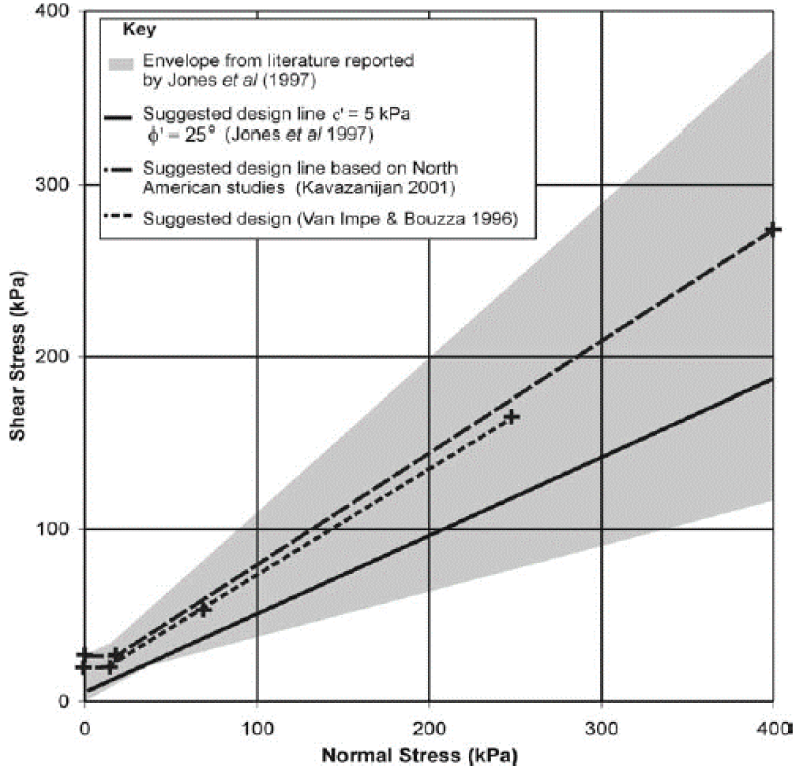 Due to large variation of shear strengths, site-specific data is recommended to be used in the design of landfill. However, if no site specific is available the approach proposed by Van Impe and Bouazza [16] can be used as a starting point in design. This approach defines design values of cohesion (c) and friction (φ) into three distinct zones:

1. Rise in leachate level within the waste mass that exceeds the maximum allowable level;

2. Excessive buildup of leachate level due to liquid waste/leachate injection that exceeds the maximum allowable level;

5. Excessive wetness of the Geomembrane-GCL interface resulting in a lower shear strength; and

According to Ohio EPA [5], the following factors of safety (FS) should be used to evaluate landfill stability:

The use of higher factors of safety is recommended if a failure could create catastrophic effect on the environment and human health, and if large uncertainty exists in input parameters to calculate the factors of safety [5].

A number of technical papers related to stability of geosynthetic-lined landfill have been reviewed, and the following conclusions and recommendations were made:

1. Geosynthetics used in landfills provides an economic and technical advantages over traditional liners. But it may create stability issue and even lead to landfill failure due to its low interface or internal shear strength if improperly designed and/or constructed.

6. The measured shear strengths of waste obtained from the literature have a wide range with reported friction angles ranging from 15 degrees to 42 degrees and cohesion ranging 0 to 28 kPa. Due to large variation of shear strengths, site-specific data is recommended to be used in the design of landfill. If no site specific is available the approach proposed by Van Impe and Bouazza [16] can be used as a starting point.

7. Landfill failure could be triggered by static loadings including excessive leachate, excessive pore pressure above the bottom liners and excessive gas pressure and excessive wetness of the geomembrane-GCL, and earthquake and blasting loading.