Annals of Advances in Chemistry

Copyright License: © 2018 Kuzmanic LA, et al. This is an open access article distributed under the Creative Commons Attribution License, which permits unrestricted use, distribution, and reproduction in any medium, provided the original work is properly cited.

Fluorescein was conjugated with 1-methyl-o-carborane and the resulting bioconjugate was biologically evaluated through microscopic and flow cytometric studies in pancreatic cancer and squamous cell carcinoma cell lines. The uniform distribution of this bioconjugate, as well as its moderate cytotoxicity and higher boron content relative to present boronated delivery agents sodium borocaptate (BSH) and boronophenylalanine (BPA), provide justification for its further evaluation as a potential delivery agent for BNCT.

Boron Neutron Capture Therapy (BNCT) is a binary method of cancer treatment in which a drug containing boron-10 (10B) is selectively transported into tumor cells and irradiated with thermal neutrons [1-3]. The large nuclear cross-section of 10B nuclei allow the capture of a thermal neutron with formation of an excited 11B nucleus, which undergoes a fission reaction (Equation 1) that produces an α–particle (4He2+), a 7Li3+ ion, and weak gamma radiation [4]. The highly charged particles damage the surrounding tissue, but dissipate their kinetic energy over 5-9 µm, or approximately one cell diameter, therefore avoiding damage to the surrounding healthy tissue [4].

The lethality of these particles is limited to boron-containing cells, and therefore the most important requirement of BNCT is the amount and selective accumulation of 10B in the cancer cells, with only small amounts entering the surrounding healthy tissue. To meet these requirements, researchers have examined both small- and macro-molecule-based boron delivery agents [1-5]. Unfortunately, to date predominantly two boronated drugs, sodium mercaptododecaborate (BSH) and boronophenylalanine (BPA) (Figure 1), have been used in clinical trials worldwide [5].

The boron content in BPA is low and the thiol group in BSH can form a disulfide linkage, which damages DNA, and both exhibit low tumor-to-brain and tumor-to-blood 10B ratios [1,3]. Developing boron delivery agents that address these issues is the focus of current BNCT research. One approach involves the conjugation of a carborane cage of high boron content with biocompatible organic compounds which are regularly used in cellular processes, such as purines, amino acids, carbohydrates, or imidazoles [6-11].

Fluorescein has been applied to a variety of medical applications, such as in the diagnosis of corneal abrasions, ulcers, and infections [12]. Fluorescein angiography is a procedure used for diagnosing retinal vascular tissue disorders and intraocular tumors [13]. Fluorescein has increasingly been used as a tumor marker for brain cancer [14,15], which makes it an attractive candidate for a BNCT delivery-agent. Carboranyl-BODIPY derivatives have also been developed for evaluation as possible fluorescent probes for BNCT [16-18]. In this work, fluorescein was conjugated with 1-methyl-o-carborane to allow observation of cellular uptake in pancreatic cancer (MIA PaCa-2) and squamous cell carcinoma (SCC-VII) cell lines. The distribution in-vitro of this theranostic agent was observed using a fluorescent density microscope without irradiation, a method that could potentially be useful for the screening of boron compounds in the absence of neutrons. Fluorescent chemical substances are also utilized during intraoperative probing of tumors using fluorescent surgical microscopy [19,20], denoting another possible application of the carboranyl-fluorescein conjugate (Scheme 1) reported here. 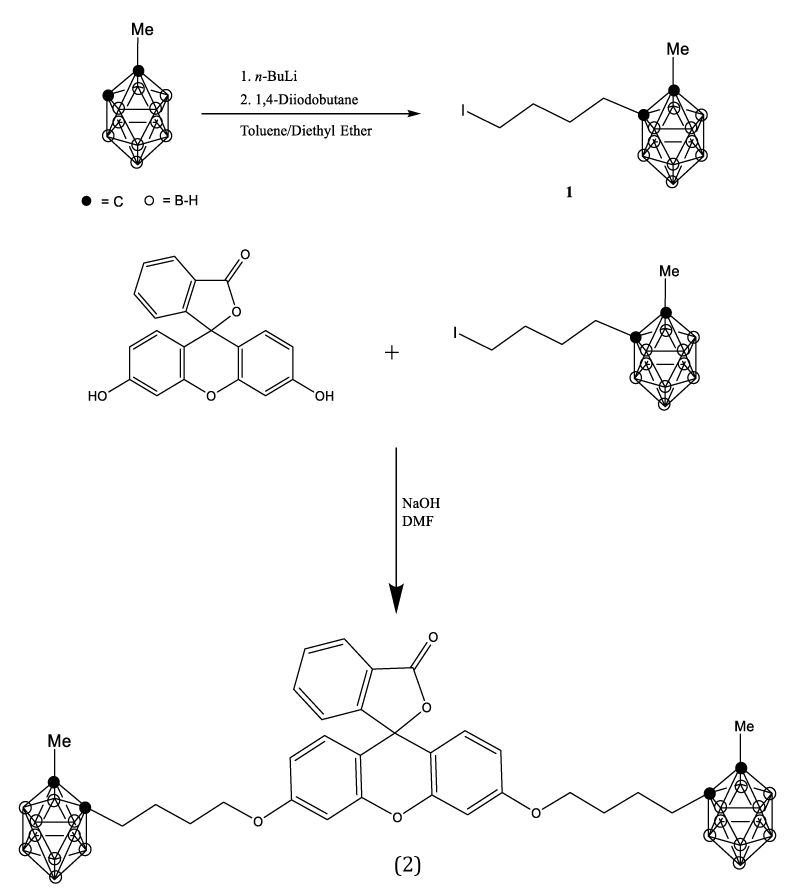 Scheme 1: Synthesis of a carboranyl-fluorescein conjugate (2).

Scheme 1 illustrates the sequence of reactions leading to the functionalization of fluorescein with the substituted carborane moieties [21,22]. Accordingly, the carborane precursor, [1-methyl-closo-1,2-C2B10H11], was first treated with n-butyllithium (1.6 M in hexanes) to form the corresponding lithium salt, which was then reacted in situwith 1,4-diiodobutane to yield compound 1 [21]. The resulting 1-methyl-2-iodobutane-o-carborane was then conjugated with fluorescein, through a procedure of Williamson ether synthesis [22], to produce the desired carboranyl-fluorescein conjugate 2 which was identified and then characterized by 1H, 13C, and 11B NMR spectroscopy as well as FT-IR spectroscopy. The IR spectra of closo-carboranyl iodide (1) and the carboranyl-fluorescein conjugate (2) exhibited strong absorptions at 2587 cm-1 and 2585 cm-1, respectively, corresponding to v(B-H) stretching. Additionally, elemental analyses and mass spectra (ESI) were obtained to confirm the formation of the products 1 and 2 shown in Scheme 1.

The cell proliferation and cytotoxicity effects of the carboranyl-fluorescein derivative 2 in a squamous cell carcinoma cell line (SCC-VII) was determined using a WST-8 assay as shown in Figure 2, which was performed in accordance with literature methods [23]. The 50% inhibitory concentration of 2 for SCC-VII cell proliferation (IC50) was 1 mM or 21 ppm 10B, reflecting moderate toxicity relative to that of BSH (28 mM) and BPA (7.9 mM) [6]. This is likely due to the increased boron content of fluorescein-tagged 1-methyl-o-carborane compared to BSH and BPA. Compound 2 was dissolved in DMSO at a concentration of 0.5 mM and applied to a growth medium containing SCC-VII. Fluorescent microscopic images were recorded following an incubation period of 48 hours (Figure 3). 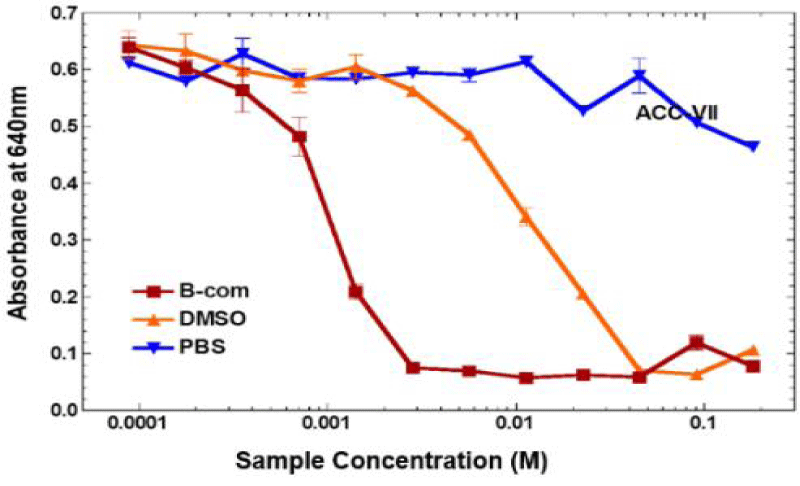 The carboranyl-fluorescein conjugate 2 was again dissolved in DMSO at a concentration of 10 mg/mL and applied to human pancreatic cancer cell line (MIA PaCa-2) cultured in growth medium at the indicated concentrations. Flow cytometry was performed after 24 hours to determine the sample uptake by cancer cells (Figure 4). Cells were washed to remove excess sample from cell cultures prior to flow cytometry, and showed a positive correlation between sample concentration and cellular uptake. To further observe cellular delivery of 2, fluorescent microscopy using black and white, green, and combined filters was performed following the addition of a 40 µg/mL sample of fluorescein-tagged 1-methyl-o-carborane in DMSO (Figure 5). Confocal microscopic images of MIA PaCa-2 were also taken following treatment with a 40 µg/mL sample of compound 2 (see Supporting Information) for 24 hours, followed by washing to remove excess sample prior to microscopic examination. Carboranyl-fluorescein conjugate 2 appeared to accumulate uniformly throughout the cytoplasm and nuclei, similar to that observed in the previous biodistribution studies performed with L-BPA [9]. The mechanism by which compound 2 crosses the plasma and nuclear membrane has yet to be elucidated. 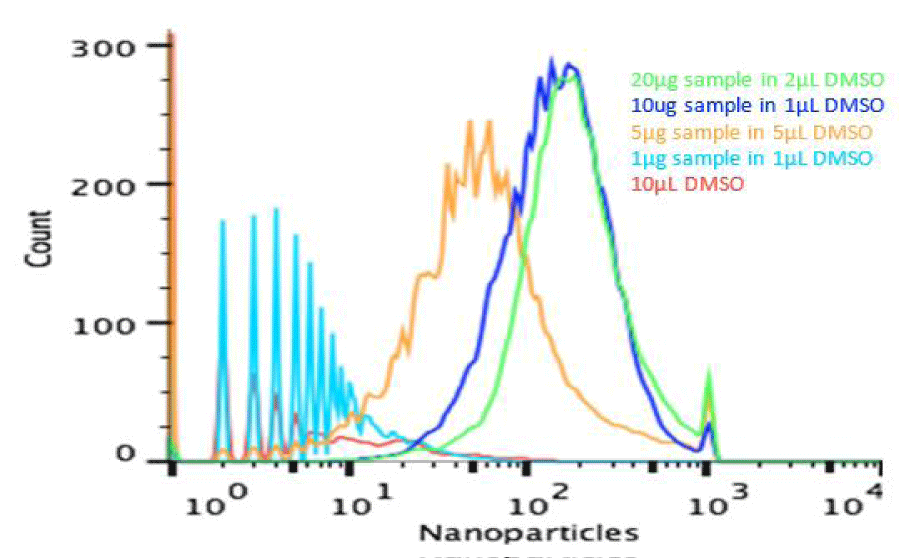 Carboranyl-fluorescein conjugate 2 was synthesized via a Williamson reaction and biologically evaluated in pancreatic cancer and squamous cell carcinoma cell lines. Compound 2 showed moderate cytotoxicity indicating that it is less toxic to normal cells when compared to that of current FDA-approved boronated delivery agents. Uniform distribution of 2 was observed in both MIA PaCa-2 and SCC-VII cell lines through phase contrast, fluorescent, and confocal microscopy. These results suggest that further investigation of the cell-killing effectiveness of 2 is worthwhile. These new results will be reported as soon as BNCT trials on this bioconjugate is completed.

All reactions were performed under argon atmosphere in oven-dried flasks using standard Schlenk line techniques. Fluorescein, n-butyllithium (1.6 M in hexanes), 1,4-diiodobutane, and sodium hydroxide (Sigma Aldrich) were all used as received. Toluene, diethyl ether, ethyl acetate and dimethylformamide (DMF) were dried using standard procedures. 1-methyl-o-carborane was supplied by Katchem Ltd. and used as received. Products were purified through silica gel (70-230 mesh) column chromatography, and then isolated to calculate their yields. FT-IR spectra were measured using a Mattson ATI Genesis FT-IR Spectrometer with KBr pellets. Elemental Analyses were performed with a Perkin-Elmer 2400 Series II CHN Elemental Analyzer. The 1H NMR, 13C NMR, and 11B NMR spectra were obtained using a Bruker Avance III 300 NMR spectrometer at 300 MHz. The integrals of 1H NMR spectra are in accordance with their assignments, and the coupling constants (Js) are given in Hz. All 13C NMR spectra were proton-decoupled. Mass spectral analysis was carried out using a Thermofinnigan LCQ Advantage LC-MS spectrometer.

The human pancreatic cancer cell line (MIA PaCa-2) was used to examine the biodistribution of bioconjugate 2. The MIA PaCa-2 cells were cultured in DMEM supplemented with 10% FBS and antibiotics. Cells were plated in a 24 well plate at a density of 0.125x106 cells per well in 1 mL of media and allowed to adhere overnight. The DMSO or the bioconjugate 2 dissolved in DMSO, was added to wells at the indicated concentrations of either 1, 5, 10, or 20μg/mL. Cells were incubated for an additional 24 hours at 37°C in 5% CO2 atmosphere, followed by 2 washes with phosphate buffered saline (PBS) and, subsequently, the fluorescence microscopy was performed on the resulting cells using the EVOS Floid Imaging Station (Thermo Fisher Scientific, Waltham, MA). Each experiment was repeated 3 times.

Cells were prepared for confocal microscopy by plating 0.125x106 cells/mL in 2mL in a 6 well plate containing sterile glass coverslips. Cells were allowed to adhere overnight and were treated with 40μg/mL of bioconjugate carborane compound 2 and incubated over an additional 24 h period. Coverslips were placed on a microscope slide after cells were washed 4 times with PBS. Confocal imaging was performed using a Zeiss LSM 5 Pascal Confocal Laser Scanning Microscope under 40X magnification.

Synthesis and Characterization of Precursor (1) and Bioconjuage (2)

1-Methyl-2-iodobutyl-o-carborane (1): By following the procedure described in literature [21], to an oven-dried 250 mL three-necked round-bottom flask was added 1-methyl-o-carborane (160.9 mg, 1.017 mmol) and dissolved in anhydrous THF (15 mL) under argon atmosphere. This solution was then cooled to -78 °C using dry-ice before n-butyllithium (0.75 mL in hexanes, 1.20 mmol) was added dropwise via syringe. The temperature of the mixture was maintained at -78°C for 1 hour before warming to room temperature. After stirring for 8 hours at room temperature, the reaction mixture was cooled to 0 °C before 1,4-diiodobutane (150 µL, 1.02 mmol) was added to the flask via syringe and the mixture was stirred for 30 minutes and then allowed to warm to room temperature. The reaction was stirred overnight and refluxed for 4 hours. After reflux, the solvent was removed under reduced pressure and extraction was performed with diethyl ether (3 x 30 mL) and deionized water. All the extracts from aqueous layer were combined with the organic layer, and the solvents were removed leaving a yellow residue as crude product. This residue was purified by thin-layer chromatography (SiO2, developed with a 6:1 mixture of n-hexane and ethyl acetate) and silica-gel column chromatography with 100% ethyl acetate as eluent. Following purification, the solvent was removed under reduced pressure to give 606 mg of a yellow-waxy residue, which after characterization through IR, NMR, and elemental analysis was identified as 1 (overall yield of 82%) and found to be in accordance with data published in the literature [21].

Fluorescein-tagged 1-methyl-o-carborane (2): Sodium hydroxide (4 mg, 0.1 mmol) was placed in an oven-dried 100 mL round-bottom flask and dissolved in 20 mL of dimethylformamide (DMF) through sonication. Fluorescein (32 mg, 0.1 mmol) and the freshly prepared 1-methyl-2-iodobutyl-o-carborane (1, 0.6 g) were added to the solution and the reaction mixture was heated at 115oC for 24 hours. The organic solvent was removed by distillation before extraction was performed with ethyl acetate (3 x 20 mL) and deionized water. The extract was combined with the organic phase and solvent was removed through rotary evaporation to leave a red-orange powder. The crude product was filtered and washed with cold deionized water. Thin-layer chromatography and silica-gel column chromatography were performed using ethyl acetate as solvent. The collected fractions were concentrated under reduced pressure and the product dried under vacuum to leave 58 mg of orange powder which was characterized by IR, NMR and mass spectra and by elemental analysis (Figures S1-S10 in Supporting Information) and identified as the carboranyl bioconjugate 2 (yield of 76%).

We thank the Northern Illinois University (NIU) Office of Student Engagement and Experiential Learning (OSEEL), the Departments of Biological Sciences, and the Chemistry and Biochemistry for their financial support. NSH also thanks NIU for the Inaugural Board of Trustees Professorship.

The manuscript was written through contributions of all authors.