Insights in Biology and Medicine

Copyright License: © 2018 Karthik M, et al. This is an open access article distributed under the Creative Commons Attribution License, which permits unrestricted use, distribution, and reproduction in any medium, provided the original work is properly cited.

Aquaculture is one of the fastest growing food sectors in the world with main a Moto to supply rich protein food to the growing human population [1]. Beyond the fishes and other animals, the crustaceans, such as prawns, shrimps, crabs, lobsters and crayfish have a vital role in augmentation of protein production [2]. The freshwater prawn, Macrobrachium rosenbergii considered to be one of the crustacean species with increasing potential for aquaculture because of its commercial value and nutritious delicacy for human consumption cells added as dietary supplements to improve the health of aquatic animals. Generally, probiotics actively inhibit the colonization of potential pathogens in the digestive tract by antibiosis or by competition for nutrients and space, as well as alteration of the microbial metabolism and stimulating host immunity [3]. Studies on M. rosenbergii with some probiotics, Lactobacillus sporogenes, Bacillus subtilis, Saccharomyces cerevisiae, Lactobacillus acidophilus, Lactobacillus rhamnosus, Bifidobacterium longum, Bifidobacterium bifidum, Saccharomyces boulardii, Clostridium butyricum, Bacillus coagulans and Lactobacillus brevis, and their products, Biogen, BinifitTM, LactoBacil®plus and ViBact* [4-14], showed enhanced growth, survival, and nutritional profiles due to improved general health by establishing their colonies in the gut. Bacillus coagulans is a Gram-positive, lactic acid forming bacterial species. It is a good candidate for probiotic use, produces organic acids and possesses the capacity to sporulate. It secretes a bacteriocin, coagulin, which has activity against a broad spectrum of enteric microbes [15-17]. Bacillus subtilis is also a Gram-positive, lactic acid-forming bacterial species. A strain of B. subtilis 2335 has the ability to produce the antibiotic, Amicoumacin, which showed an in-vitro activity against Helicobacter pylori [18].

In the present study, B. coagulans and B. subtilis was individually incorporated at different concentrations with formulated diets and fed to M. rosenbergii PL for assessing their ability on promotion of growth and survival by enhancing the contents of basic biochemical constituents (total protein, amino acid, carbohydrate and lipid), and activities of digestive enzymes (protease, amylase and lipase). This was further to recommend the aquaculture industry with their optimum concentrations. Furthermore, to evaluate their competitive exclusion abilities of pathogenic bacteria, their colony establishments in the gut of PL were confirmed biochemically.

The post larvae (PL-20) of M. rosenbergii were procured from the Nursery pond at Singanallur, Coimbatore, Tamil Nadu, India. They were transported to the laboratory in polythene bags half filled with oxygenated pond water. They were then acclimated to the ambient laboratory condition in cement tanks (6×3×3 feet) filled with ground-water for 2 weeks. The ground water satisfied the required physico-chemical parameters (Table 1).

During acclimation the prawns were fed with boiled egg albumin, live Artemia nauplii, and commercially available scampi feed. About 50% of tank water was routinely renewed every day to maintain a healthy environment. Aeration was also provided. These ensured sufficient oxygen supply to the prawns and an environment devoid of accumulated metabolic wastes. The unfed feeds, feces, molt and dead prawns were removed by siphoning.

Procurement of probiotics and their sub-culture

The lyophilized powder of Bacillus coagulans (MTCC 2302) and Bacillus subtilis (MTCC 121) were procured from Microbial Type Culture Collection (MTCC), Chandigarh, India. It was subjected to sub-culture with nutrient broth (Hi-media, India) containing the following ingredients as per manufacturer’s protocol (Table 2) and incubated at 37 °C for 12 hours to observe their growth.

Agar (12.0 g L-1) was added with the nutrient broth, and the agar plates were incubated for 24 h at 37°C for checking the sterility. Then 20 μL broth culture of B. coagulans, and B. subtilis were separately spread over the agar media (nutrient+agar) and kept for 24 h at 37 °C to observe their growth (Figure 1). 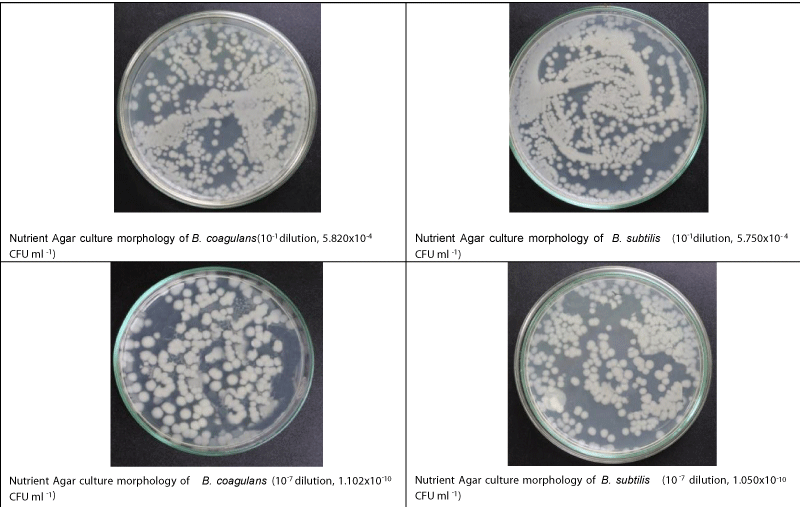 Figure 1: Nutrient Agar culture morphology of B. coagulans, and B. subtilis.

The proportion of each ingredient required was calculated precisely for the premix along with tapioca powder, stream cooked and cooled at room temperature (28ºC). Egg albumin, sunflower oil, and vitamin B-complex with vitamin-C were then added one by one. B. coagulans, and B. subtilis were separately incorporated into the basal diet at 10-1, 10-3, 10-5, 10-7 and 10-9 concentrations, each (diet-1 to diet-10). Diet ‘0’ (without incorporation of any probiotic served as control. The dough was prepared for each formulation and pelletized separately to 2 mm pellets. These were dried in a thermostatic oven (M/s. Modern Industrial, Mumbai, India) at 40ºC until they reached constant weight, and stored in airtight jars at room temperature (28ºC). The proximate composition of organic matters was determined according to AOAC [22]. The feeds were then placed in a hot air oven at slightly >100ºC and the loss of weight determined as the moisture content. The concentrations of minerals were estimated by using atomic absorption spectrophotometer (AAS) method (Table 4).

Viability of probiotics in the respective diets

The diet was freshly prepared once every 15 days to ensure high probiotic viability throughout the feeding trail. One gram of each diet prepared with10-7 diluted probiotic concentration was taken and dissolved in autoclaved double distilled water (10 mL). A volume of 20µL was spread over MRS agar medium, incubated at 37ºC for 24 h and the colony morphology observed was compared with the original B. coagulans, and B. subtilis sub-cultures morphology. The growth was recorded in all the culture plates except control. Therefore, the incorporated B. coagulans, and B. subtilis were alive in their respective diets even on day-15 after their formulation (Figure 2). 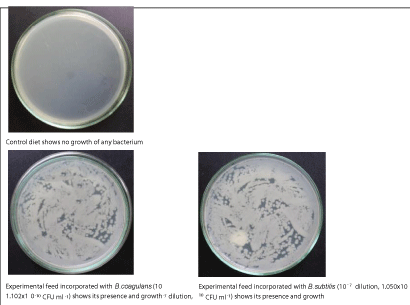 Figure 2: Viability of B. coagulans, and B. subtilis in experimental diets on day-15 after they were prepared.

M. rosenbergii PL-35 (2.03±0.05 in length and 0.18±0.01g in weight) were acclimated in plastic aquaria for three days during which they starved for 24 hr before the commencement of the experiment. The feeding trail lasted 45 days. Four groups of 35 prawns were placed in 25 L aquaria in triplicate groups. The experimental groups were fed with the respective concentrations of B. coagulans, and B. subtilis incorporated feeds twice a day (8:00 AM and 8:00 PM) at 10% of body weight. All the water was renewed daily and aerated constantly. The uneaten food particles, faeces, moults and dead prawns were removed by siphoning.

Estimation of concentrations of biochemical constituents

Activities of digestive enzymes were assayed before and after the feeding trial. The digestive tract of three prawns from each replicate were carefully dissected and homogenized in ice-cold distilled water and centrifuged at 9300 g under 4ºC for 20 min. The supernatant was used as a crude enzyme source. Total protease activity was determined by casein-hydrolysis method of Furne et al. [29], where one unit of enzyme activity represented the amount of enzyme required to liberate 1μg of tyrosine per minute. Amylase activity was determined according to Bernfeld et al. [30], and the specific activity of amylase was calculated as milligrams of maltose liberated per gram of protein per hour (mg/g/h). Lipase activity was determined by the method of Furne et al. [29]. One unit of lipase activity was defined as the amount of free fatty acid released from triacylglycerol per unit time estimated by the amount of NaOH required to maintain pH constant and represented as milli equivalents of alkali consumed.

The gut of control PLs, and the gut of experimental PLs fed with the best concentration of B. coagulans, and B. subtilis supplemented diet (10-7 dilution of each probiotic) were subjected to bacterial analysis. The PLs were deactivated by kept them in freezer at -20ºC for 10 minutes. The PL surface was sterilized with 50 ppm formalin for 30 seconds to remove the external flora. The digestive tract was dissected and homogenized with phosphate buffered saline (pH-7.2) under aseptic condition. The homogenate was serially diluted up to 10-4 dilution. A volume of 0.5 mL of aliquot was mixed with agar nutrient broth and cultured for 24 h at 35ºC. Then, 0.1 mL broth culture was seeded over the surface of freshly prepared nutrient agar plates and incubated at 37 ºC for 24 h. The appearance of different bacterial colony was identified and confirmed through routine bacteriological tests [31]. The bacterial colonies were enumerated [Bacteria count (CFU/g)=Number of colonies×Dilution factor/ Volume of sample (g)].

One way analysis of variance (ANOVA) using SPSS package (version 20.0) was used to determine the variations between control and treatment values, and between treatments, followed by Duncan multiple range test (DMRT) and the significances at P<0.05 are mentioned. The data are represented as means±standard deviations.

The survival, growth (LG and WG), specific growth rate, protein efficiency ratio were significantly increased in the prawns fed with B. coagulans, and B. subtilis supplemented diets when compared with control (P<0.05). Among the different concentrations, 10-7 dilution of each probiotic incorporation was produced the best performance on these parameters. The lowest FCR recorded in this concentration of B. coagulans, and B. subtilis incorporations reflected the superior quality of the diets formulated (Tables 5 and 6).

Concentrations of basic biochemical constituents and activities of digestive enzymes

The concentrations of total protein, amino acid, carbohydrate and lipid were significantly increased (P<0.05) in test prawns fed with B. coagulans, and B. subtilis supplemented diets when compared with control (Tables 7 and 8). These were because of the significant increases (P<0.05) in activities of protease, amylase and lipase (Tables 7 and 8), which ultimately produced better digestion and absorption of nutrients. Among the different concentrations, 10-7 dilution of each probiotic incorporation was produced the best performance on these parameters, which in turn responsible for better survival and growth of M. rosenbergii. 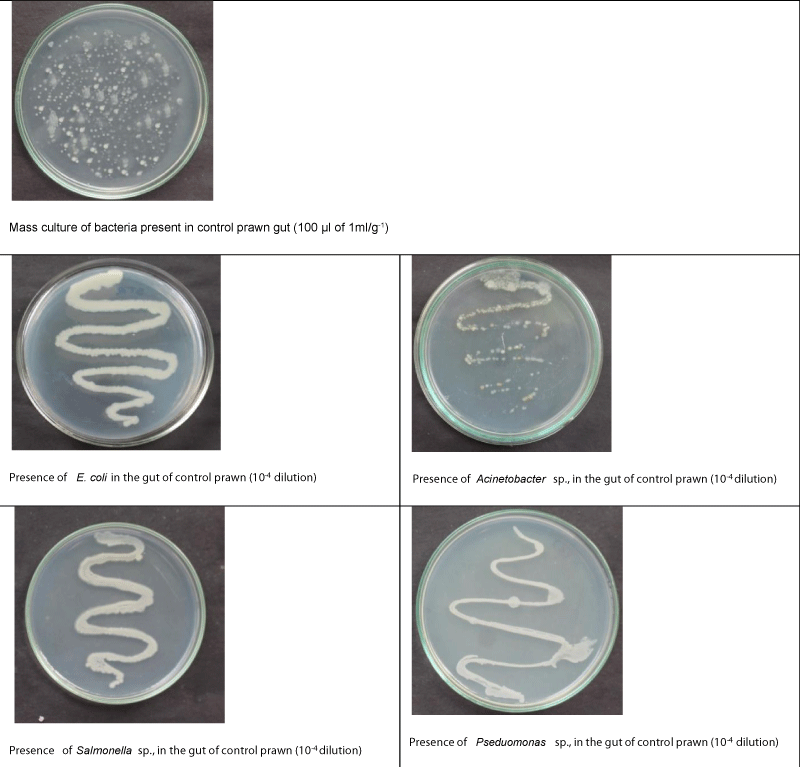 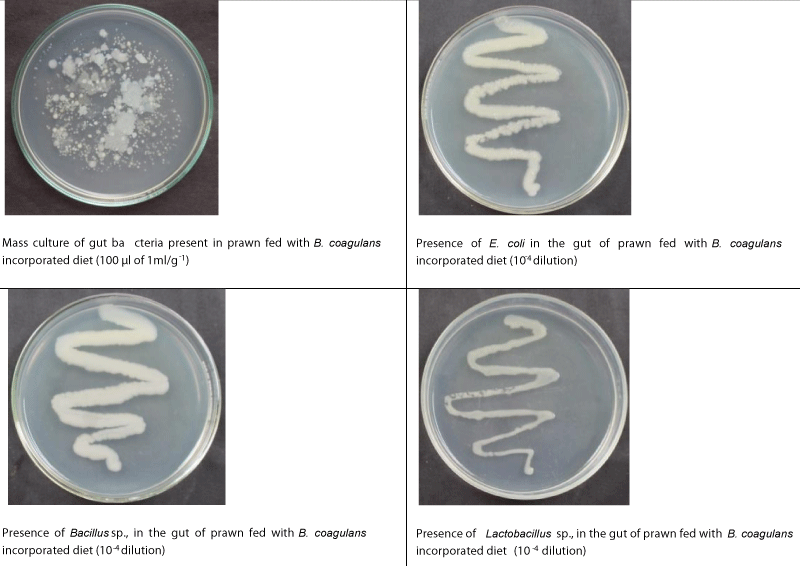 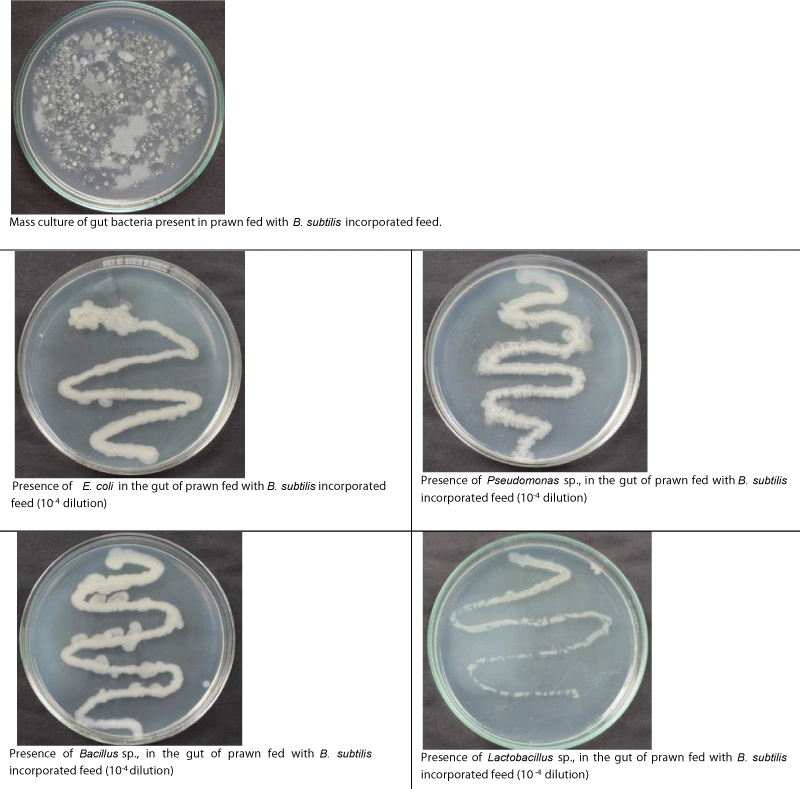 These results indicated that the supplemented probiotics have the characteristics ability to enhance the digestion, absorption of nutrients and alteration in the intestinal microflora, which led to better growth and survival of M. rosenbergii. It has been reported that the SR, WG, SGR, FCR and PER, carcase proximate composition, and activities of protease, amylase and lipase were significantly improved in M. rosenbergii fed with different probiotics, L. sporogenes, L. rhamnosus, L. ceremoris, L. acidophilus, B. subtilis, C. butyricum, B. coagulans, S. cerevisiae and commercial probiotic products, LactoBacil®plus, ViBact*, BinifitTM and Biogen® incorporated diets [4-13,32-42]. Similarly, the dietary administration of Lactobacillus plantarum, Bacillus sp., and C. butyricum also produced a significant improvement in growth, carcase biochemical constituents, and activities of digestive enzymes in shrimps, Litopenaeus vannamei and Marsupenaeus japonicas [12,43-46].

Overall, these probiotics incorporated diets produced better growth and survival due to better FCR and activities of digestive enzymes, which in turn led to better nutritional profile. B. coagulans, and B. subtilis incorporated diets possessed the ability of competitively exclude Acetonobacter sp., Salmonella sp., and Pseudomonas sp., and Acetonobacter sp., and Salmonella sp., respectively. Therefore they are recommended as feed additives for sustainable culture of M. rosenbergii.