Archives of Food and Nutritional Science

Copyright License: © 2018 Kavitha B, et al. This is an open access article distributed under the Creative Commons Attribution License, which permits unrestricted use, distribution, and reproduction in any medium, provided the original work is properly cited.

The quality characteristics of selected black gram varieties viz., VBN 5, VBN 7, ADT 3, T9 and CO 6 and were evaluated for their suitability for the preparation of thick pancake. The foaming stability and foaming capacity were found to be maximum in VBN 5, CO 6 and T9. Maximum rise in volume was recorded in CO 6 (149 ml) followed by VBN 5 (148 ml) and T9 (147 ml) which is an indication good quality of thick pancake. Thick pancake prepared using 5 black gram varieties were analyzed for the physicochemical and microbial load. The texture profile viz., springiness, cohesiveness, chewiness and gumminess was evaluated for VBN 5, CO 6, T9 and VBN 7 respectively. The protein content was higher in thick pancake prepared from VBN 5 (25.47/100 g) compared to CO 6 (24.66 g/100g). Among the selected varieties, CO 6, T9 and VBN 5 had good batter content, texture, and microstructure and were found to be most suitable for thick pancake preparation.

Just like a thick pancake (Dosa) is also a favourite fermented food of India, particularly in the South. The batter preparation for a thick pancake (dosa) is similar to that of idli, except the rice and black gram are finely ground, and this pan cake batter is comparatively thinner compared to rice batter. The batter is spread out as a thin, fairly crisp pancake as a greased hot tawa and sparingly sprinkled with oil and cooked crisply on both sides an eaten directly with accompaniments as from idli [1-3]. Instant mixes of traditional products such as idli, dosa and vada based on rice and black gram blend flours are becoming increasingly popular in the Indian market [4-6]. Due to a larger difference in the prices for black gram and other cereals, the manufacturers are tempted to reduce the proportion of black gram in the flour mix while tailoring the texture by use of other processing aids [7].

The pancake is a popular breakfast dish across South Indian homes and a favorite eat-out dish for the rest of India [8]. Quick and easy define it really. Some varieties need no time with the batter; some need a bit of fermentation [6,9]. However, the sum of all products is always the same-tasty dosas. Masala dosa Just plain dosa with a spiced mashed potato filling. Many types of dosa available in the market these are the various types of dosa prepared from black gram such as there are rawa dosa made with semolina and rice flour [10]. No grinding, no fermenting. Just mix the two with water or buttermilk.pesarathu Dosa made of green gram (moong daal). A popular Andhra Pradesh breakfast and snack, made by mixing chopped green chillies, ginger and onions to the green gram batter. Neer dosa from Karnataka. “Neer” means water in Kannada. Really thin dosa made of water and rice flour [11-13]. No fermenting. Davangere Benne Dosa from Davangere, a north-west Karnataka town. Means butter dosa. Dosa made with white unsalted butter. There are three kinds of these-Benne Khali dosa, Benne open dosa and Benne masala dosa, depending on whether the potato masala is inside or outside the dosa.Adai dosa-Protein-rich dosa made of different types of pulses (urad daal, chana daal, toor daal, yellow and green mong daal, arhar daal) mixed with cumin and fennel seeds and chopped chillies, onions, ginger and coriander or curry leaves [14-16]. Maida Dosa made of maida (plain flour) and rice flour mixed with chopped chillies, onions, ginger and coriander or curry leaves. No fermenting. Atta dosa made of atta (wheat flour) and rice flour, with or without chopped chillies, onions, ginger and coriander or curry leaves. This paper aims to screen blackgram varieties and to record the quality characteristics of thick Pancake (dosa batter) and to evaluate the textural, nutritional, organoleptic and microbiological characteristics of a thick pancake.

The seeds of black gram variety viz., VBN 3, VBN 4, VBN 5, VBN 6, VBN 7, CO 6, ADT 3, TMV, T9, VBg 010-024, VBg 010-025 and VBg 009-005 were procured from National Pulse Research Institute (Vamban), Agricultural College and Research Institute (Madurai) and Department of Pulses, TNAU (Coimbatore). The seeds of all the varieties were freed from extraneous material and stored in air tight plastic containers under ambient conditions. All other ingredients viz., rice and fenugreek used in the preparation of pan cake batter and pan cake preparation were procured from the local market in Madurai.

Twelve black gram varieties were screened based on their functional and chemical properties. Functional characteristics such as foaming capacity (FC) and foaming stability (FS) of black gram were measured by the volumetric method as described by Lin et al. [17]. The arabinose and galactose content of selected black gram varieties were analyzed using High-Performance Liquid Chromatography (HPLC) as given by Tanaka [18]. The fatty acid composition was analyzed by solvent extraction method Cohen [19].

Milled parboiled rice and dehusked black gram dhal were soaked separately in portable water for 6 to 8 hours. The water is drained, and the soaked rice was ground to a fine gelatinous paste, while thus the drained black gram dhal was ground to a fluffy soft texture. The rice and black gram batter were mixed together, and 0.8% salt was added, and the thick pancake (Dosa) batter was incubated at room temperature, and the fermentation was allowed to take place for 12 hrs. The fermented batter was further mixed well with a stainless steel ladle. The batter was spread out as a thin, fairly crisp thick pancake as a greased hot tawa and sparingly sprinkled with oil and cooked crisply on both sides and eaten directly (Figure 1). 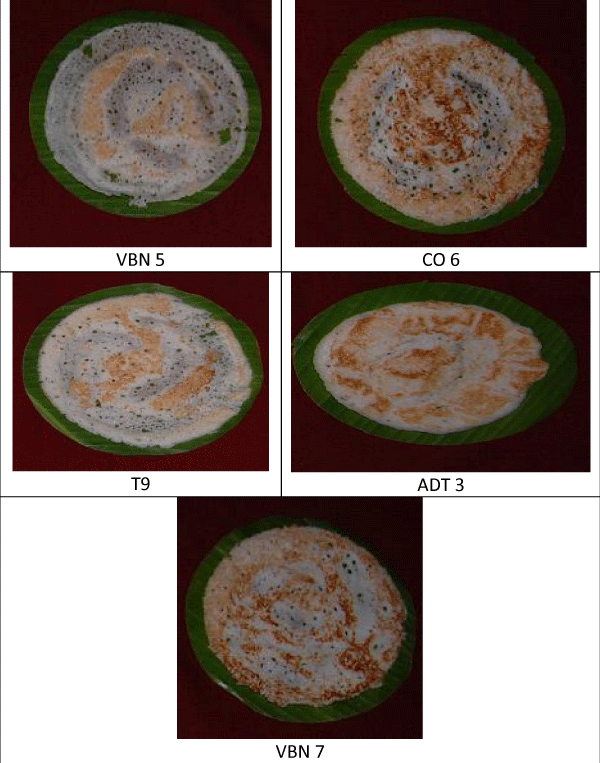 All results of triplicate samples were statistically analyzed using Fisher’s least significant differences (LSD) test to differentiate the treatment means and the level of significance (P<0.05). Statistical analysis was performed by using Statistica Version 5.5 (Statsoft Inc., OK, and the USA) software. In reporting data, the results of individual samples were reported as the mean±standard deviation. Factorial Completely Randomized Design (FCRD) as per the method described by Gomez and Gomez [28] was employed for the analysis with a triplicate number of samples.

The foaming capacity of the 12 black gram varieties ranged between 33.33 (VBN 7) to 35.71 (VBN 5) g per cent. Foaming stability was maximum for T9 (35.2 g per cent), followed by VBN 5 (35.12 g per cent) and minimum for VBN 4 (32.46 g per cent) after 120 min of storage. The FC and FS have a significant influence on the textural and leavening properties of idli and thick pancake (dosa) [29]. The mucilaginous texture of black gram is attributed to the arabinogalactan, present exclusively in black gram which is also responsible for smooth, spongy texture of idli and thick pancake (dosa). The arabinose and galactose content of variety VNB 5 (19.8 and 23.6 mg g-1) were significantly higher followed by T9 (16.9 and 20.1 mg g-1). Black gram polysaccharide may be accounted for exerting higher foaming stability [29,30]. Based on the functional and chemical properties, five black gram varieties viz., VBN 5, T9, ADT 3, CO 6 and VBN 7 were screened and used for the preparation of South Indian breakfast thick pancake dosa. The study results were given for thick pancake (dosa) batter and thick pan cake (dosa).

The prepared thick pancake batter was studied for physicochemical characteristics. Batter quality analysis such as batter weight (g), batter volume (ml), raise in batter volume (ml), pH and acidity were analyzed from the selected black gram varieties.The black gram varieties viz., VBN 5, T9, ADT 3, CO 6 and VBN 7 were found to have good acceptability for thick pancake development. The batter was prepared from rice and black gram as for thick pancake preparation, and the physicochemical parameters of the batter were evaluated.The physicochemical analyses of thick pancake batter prepared using the selected 5 black gram varieties were assessed for the results are given in table 1. The batter weight reduced gradually during a fermentation period of 18 hours and ranged between 272 and 318 g, and batter volume increased almost two-fold in all the varieties just as for thick pancake batter. The increase in volume ranged between 147 and 149 ml for the batter prepared from 100g of rice and 30 g of black gram. Maximum rise in volume was found in black gram varieties CO 6 (149ml) followed by VBN 5 (148ml), T9 (147ml), VBN 7 (147ml) and ADT 3 (110ml). The rise in volume is an indication of the good quality of batter which is highly suited for thick pancake preparation. The changes in pH and acidity brought about by batter fermentation were evaluated. The pH of the batter ranged 6.18 to 6.20, and after fermentation for 18 hours, the corresponding value ranged from 4.28 to 4.51. The changes in pH are attributed to the concomitant increase in acidity during fermentation which had increased from an initial level of 0.07 to 0.44 g/100g after 18 hours of fermentation.

The data about physical characteristics such as diameter and texture were analyzed thick pancake prepared from selected black gram varieties. The diameter of thick pancake developed from the different black gram varieties ranged from 8.00 to 8.50cm (Table 2). The texture of dosa was assessed regarding the number of pores measured by the ink print test method, where in the applied prints furnish a record of the number of pores per square inch in the graph sheets. The texture of the dosa was evaluated by observing the porosity, which indicates the softness of the developed dosa. Among the selected varieties VBN 5, T9, CO 6 and ADT 3 showed maximum pores of 14, 13, 12 and 11 respectively. The higher number of pores in a thick pancake is an indication of the soft texture of idli. Hence the varieties mentioned above were selected for development of thick pancake.

Organoleptic quality of thick pancake was evaluated by 30 semi-trained judges using 9 points hedonic scale rating, and the sensory scores are given in table 4. The quality attributes were assessed for colour, flavour, texture, taste and overall acceptability. Concerning colour, flavour and texture, the score value was higher for VBN 5, CO 6 and T9. The score for taste and overall acceptability ranged between 9.0, 9.0 and 8.8. The thick pancake (Dosa) samples prepared from black gram varieties VBN 5, CO 6 and T9, were found to have good organoleptic characteristics. Poongodi Vijaya Kumar [33] reported that the softness of dosa from composite flour was marginally less in comparison with the softness of dosa from rice flour. The softness of dosa from 30% MBCF was just about right and others in most of the liking score on softness and also good sensory profile.

The microstructure of the dosa prepared from varieties VBN 5, T9, CO 6 and ADT 3 was analysed by cutting the thick pancake (Dosa) conforming to 1x1 cm regarding width and breadth. The cut halves were then subjected to the cross-sectional view under a microscope, and the results are shown in figure 2. Microstructure profile reveals the linear profile of leavening of the batter and incorporation of air and porosity of the product. Higher the numbers of pores were found to correlate to better batter quality, foaming capacity and the content of the mucilaginous substance arabinogalactan in the black gram variety. The texture and softness level was higher in thick pancake (Dosa) developed from VBN 5 and T9 varieties compared to VBN 7. Kanchana et al. [20] and Lu et al. [36] studied the microstructure rupture of idli and dosa from selected rice and pulse varieties. The texture was found to be very soft and more pores were present in idli and dosa prepared from rice variety(Ambai16, Ambai36, ASD19, CR1009) and black gram variety CO 6 and T9. Similar observations seen in the present study with variety CO 6 and T9 which exhibited good thick pancake (Dosa) making quality on par with variety VBN 5.