Transcatheter Arterial Embolization for the treatment of upper gastrointestinal bleeding

Copyright License: © 2019 Habib M, et al. This is an open access article distributed under the Creative Commons Attribution License, which permits unrestricted use, distribution, and reproduction in any medium, provided the original work is properly cited.

Background: Transcatheter arterial embolization can be used for patients with recurrent bleeding from the upper gastrointestinal tract after failed endoscopic treatment. Our aim to identify the clinical and technical factors that influenced the outcome of transcatheter embolization for therapy of upper gastrointestinal bleeding after failed surgery or after failed endoscopic treatment in high risk surgical patients.

Methods: We performed a prospective study to analysis of the 15 patients who underwent Transcatheter arterial embolization for nonvariceal upper gastrointestinal bleeding at Alshifa hospital from January 2015 to March 2019.

The following variables were recorded: demographic data, time from bleeding start to TAE, units of packed red cells before TAE and units of packed plasma before Transcatheter arterial embolization and we analysis 30 days rebleeding rates and mortality.

Conclusion: In our experience, arterial embolization is a safe and effective treatment method for upper gastrointestinal bleeding and a possible alternative to surgery for high-risk patients.

Acute nonvariceal upper gastrointestinal (GI) bleeding remains a challenging presentation due to significant morbidity and mortality rates, and about half of all cases of upper GI bleeding are caused by gastric and duodenal ulcers. Although first-line endoscopy achieves bleeding control in most patients, if this does not work, the mortality rate can be 5% to 10% because of multiple comorbidi­ties, advanced age, and high transfusion requirements. However, hospitalization and mortality due to severe upper gastrointestinal bleeding as a result of peptic ulcer are still high among the elderly [1-4].

Surgery is also associated with high mortality, and therefore, selective transcatheter arterial embolization (TAE) is considered a safer alternative due to the avoid­ance of laparotomy, particularly in high-risk patients. In fact, in many institutions, TAE is now the first-line intervention for massive arterial bleeding from the upper GI tract that is resistant to endoscopic therapy.

Arterial embolization in the upper GI tract above the ligament of Treitz is generally considered to be very safe because of the rich collateral supply to the stomach and duodenum.

From January 2015 to March 2019, 15 patients were referred to cardiac catheterization department with upper gastrointestinal bleeding. The typical candidate patient presents with the following:

There are no absolute contraindications because angiography and embolization may be needed as lifesaving procedures.

The median age was, 62 years (age range, 14–82 years). Female was 3 patients (20%), The median time that passed from the clinical symptoms of bleeding to embolization was 4.2 days, 6 patients underwent multidetector computed tomography angiography (MDCTA) and 9 patient underwent endoscopy, For 1 patient, TAE was performed after failed endoscopic and surgical treatment due to duodenal ulcer, 6 patient underwent TAE because of high risk of surgery (2 liver cancer, 1 liver hemangioma, 1 pancreatic cancer, 1 right hepatic artery pseudoaneurysm after previous cholecystectomy, and 1 liver traumatic Arteriovenous fistula), and 8 patients TAE was performed after failed endoscopic intervention. Baseline patient characteristics and the amount of packed red blood cells and freshly frozen plasma administered to the patients before TAE are presented in table 1.

The technical success rate of the embolization procedure, which was defined as complete angiographic occlusion of the targeted vessels, was 100%. Out of the 15 cases, 12 (80%) were therapeutic embolizations, when the source of the bleeding was visualized during angiography, and 3 (20%) were prophylactic embolizations of the anatomical site. The sites of embolization are presented in table 3.

No complications were reported after the procedure. Two (13%) patients had an episode of rebleeding within 30 days after the embolization procedure, one patients after TAE were treated surgically, and another patient was treated by re-embolization.

Examples of the procedure are shown:

A 72-year-old female patient with upper GI bleeding, she had history of pancreas CA, she transferred to Al-Najah Hospital because Wipple operation. But the operation was failed. After failed operation massive PE and Melina was developed Endoscopy was done and suggested that bleeding from 2nd segment of duodenum. The Pre-operative.: HgB: 6.8 g/dl despite 28 unit of blood and plasma transfusion. Urgent selective angiography was done and suggested cutoff of superior pancreatic duodenal artery and coil Embolization was done the patient was discharged after 2 days with good condition and HgB level was 10.5 g/dl. 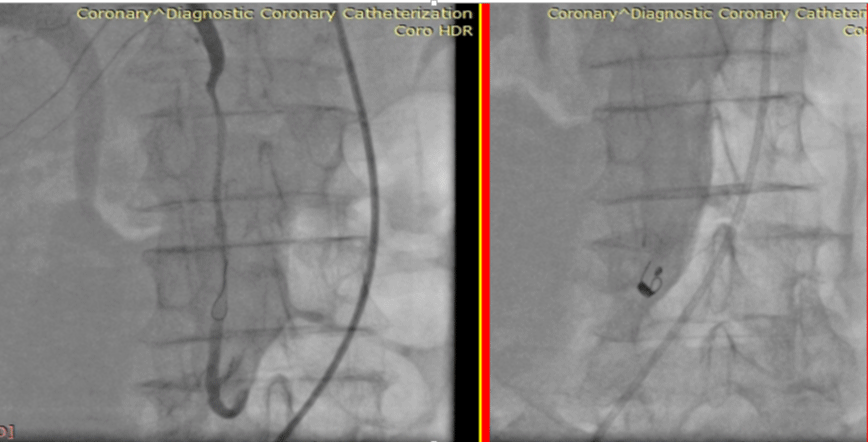 Figure 1: Before and after coil embolization of gastroduodenal artery. 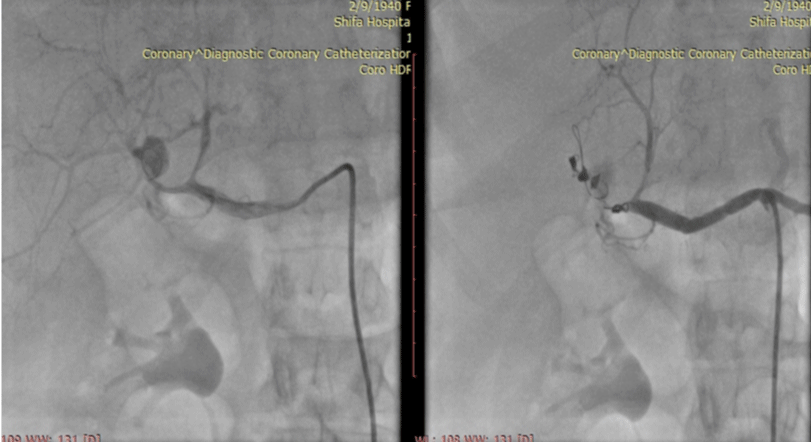 Figure 3: Before and after Coil Embolization for right hepatic artery psedouaneurysm.

A 14-year-old man, who had no remarkable past illness, was injured in a motorcycle-versus-vehicle crash and was transferred to our Emergency Department due to right upper abdominal pain. On arrival, his blood pressure was 110/70 mmHg, and heart rate was 96/min. Physical examination revealed right upper quadrant tenderness with muscular rigidity. Before the planned embolization procedure, the patient began experiencing abdominal pain nausea, and vomiting, Laboratory evaluation was notable for total bilirubin of 1mg/dL, international normalized ratio of 1.5 U, partial thromboplastin time of Laboratory data showed only mildly abnormal liver function tests and other biochemical studies were normal. A contrast-enhanced dynamic examination was performed with a MDCT (Sensation 124, Phillips). The arterial and the portal venous phase images were obtained at a 35 and 90 s delay after contrast injection. The MDCT scan disclosed a grade 4 liver injury and a 9x10 cm intrahepatic hematoma arising from the right hepatic artery. Coil Embolization was done and bleeding control was achieve (Figure 4). 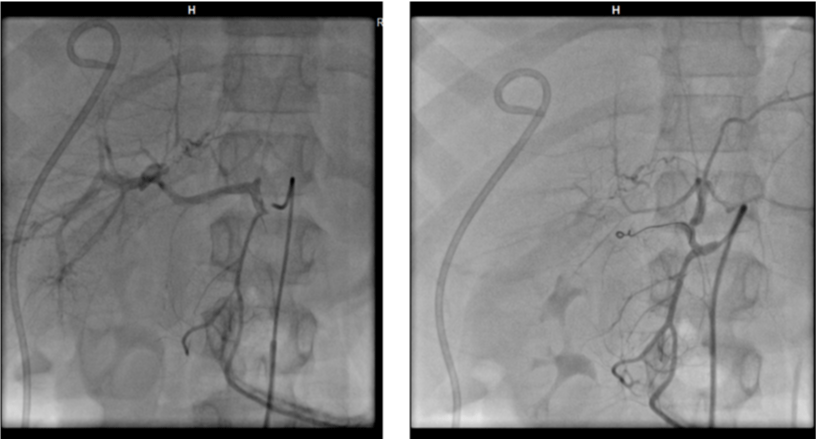 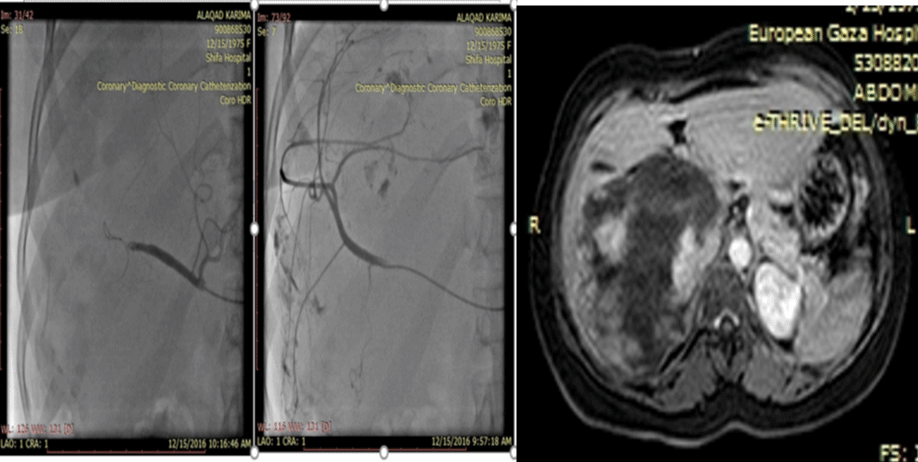 In our trial (13%) of patients had an episode of rebleeding within 30 days after the embolization procedure. Dempsey et al., reported recurrent bleeding (30%) after prophylactic gastroduodenal artery embolization [11]. repeated bleeding could be explained by the abundant collateral circulation of the duodenum, al-though inaccurate artery selection may also be responsible for higher rebleeding rates when performing a prophylactic embolization.

Our trial (20.0%) of the patients died. (one patient liver cancer, one patient pancreatic cancer and last patient right hepatic artery pseudoaneurysm). The mortality rate reported in our study is not different from rates reported in the literature (24% in Beggs et al.,28% in Loffroy et al.) [12,13].

The results of this study suggest that, after failure of therapeutic endoscopy or high surgical risk for upper gastrointestinal bleeding, TAE should be the treatment of choice. TAE can also be used to effectively control bleeding after failed surgery or TAE. The safety and efficacy of TAE for the treatment of life-threatening, acute, nonvariceal upper GI bleeding is now widely accepted and is considered the gold stan­dard for endoscopy-refractory patients.