An uncommon cause of isolated ascites: Pseudomyxoma peritonei

Copyright License: © 2019 Hady L, et al. This is an open access article distributed under the Creative Commons Attribution License, which permits unrestricted use, distribution, and reproduction in any medium, provided the original work is properly cited.

Pseudomyxoma peritonei or Gelatinous Peritoneal Disease is a rare disease. We report a case treated in the department of Hepato-Gastroenterology at Ibn Sina Hospital in Rabat, of a 64-year-old male who presented with an abdominal pain and an increased volume of the abdomen corresponding to ascites. Imaging and anatomopathological study made it possible to diagnose the disease. However, given the general state of the patient, he is under palliative care.

Pseudomyxoma peritonei (PMP) or Gelatinous Peritoneal Disease is a rare condition that refers to an anatomo-clinical entity characterized by ascites of variable abundance in the peritoneal cavity, viscous or mucinous, associated or not with neoplastic epithelial cells. It predominates in women. Diagnosis is guided by imaging and confirmed by histology. Prognosis is good in case of early management. We report the case of a male diagnosed with Pseudomyxoma peritonei revealed by isolated ascites.

A 64-year-old patient with a history of hypertension treated with amlodipine presented 4 months ago with a progressive abdominal distension and a diffuse abdominal pain predominating in the right iliac fossa, with no associated transit disorders or externalized digestive bleeding, all evolving in a context of impaired general condition with weight loss, anorexia and profound fatigue.

Clinical examination found an altered patient with a WHO performance status at 3, afebrile, anicteric with moderate ascites, with no evidence of portal hypertension or omental cakes, no palpable mass, ganglionic areas were free; the rest of the clinical examination was within normal limits.

The exploratory puncture of the ascites fluid hardly brought back 15cc of a yellow and viscous liquid of which the biochemical and cytological analysis showed an elevated protein content at 60g / l and a cellularity of 160 leukocytes / mm3 predominantly lymphocyte (69%). Biologically there was a normocytic normochromic anemia (hemoglobin level at 11.9g / dl), and a CRP level elevated to 117.3mg / l; liver and renal functions were normal. Abdominal ultrasound showed a normal-looking liver with free intraperitoneal effusion of great abundance. Chest X-ray was normal. Abdominopelvic computed tomography (CT) showed a high-density abdominopelvic effusion with a nodular peritoneal thickening exerting a mass effect on the liver (liver scalloping Figure 1) associated with a peripheral calcified mass of the right iliac fossa communicating with the coecum evoking an appendicular mucocele (Figure 2) complicated by a Pseudomyxoma peritonei. A laparoscopic peritoneal biopsy showed an adipose tissue containing numerous mucus pools with shreds of uni-stratified mucosal cells and no cytonuclear atypia suggestive of low grade Pseudomyxoma peritonei (Figure 3A,B). The case of the patient was discussed in a multidisciplinary team meeting and given the altered general condition of the patient (WHO performance status 3), a palliative care decision was retained. 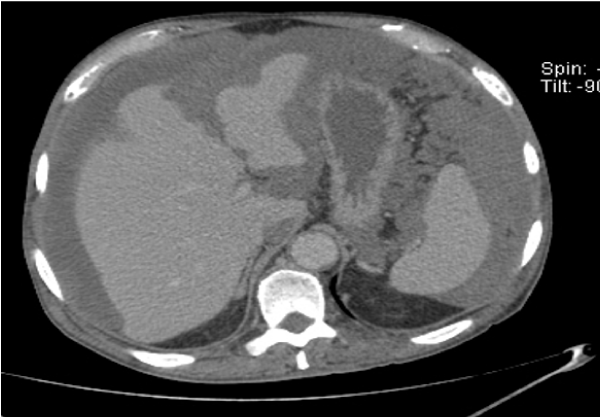 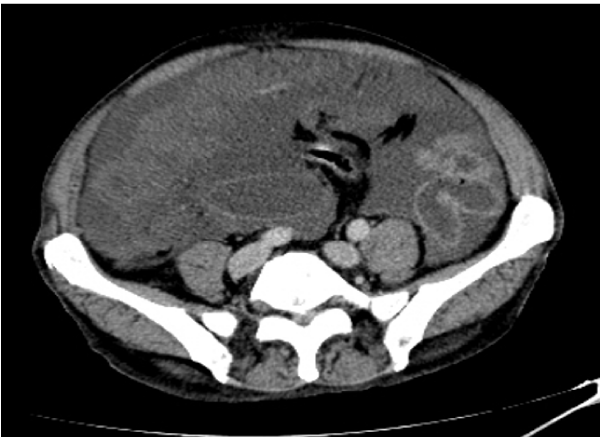 Pseudomyxoma peritonei is a clinico-pathological entity corresponding to the intraperitoneal dissemination of mucus-secreting cells responsible for mucin accumulation in the peritoneal cavity. It is a rare disease that was first described in 1842 by Karel Rokitansky then in 1884 by Werth who gave it its current name. Its incidence has recently been estimated at 1 to 2 cases per million inhabitants per year; according to the studies [1], this incidence is 2 per 10,000 laparotomies [2]. Women appear to be more affected than men, with a sex ratio of 1.2 to 3.3 and an age of diagnosis ranging from 20 to 80 years. The case we report concerns a 64-year-old male.

The appendix is ​​now held as the first organ responsible, although mucinous carcinomatosis may occasionally arise from mucinous adenocarcinoma of other organs: gallbladder, stomach, fallopian tubes, ovaries or a colo-rectal origin. In the French multicenter study published in 2010 and involving 301 patients, the origin of Pseudomyxoma peritonei was appendicular in 91% of cases, ovarian in 7% and unknown in 2% of cases [3]. In our patient, the origin is appendicular.

The main pathophysiological pattern used to explain the occurrence of Pseudomyxoma peritonei is that of an appendicular rupture, including epithelial mucinous proliferation, causing mucus and neoplastic swarming in the peritoneal cavity.

Symptomatology is made of a pseudo-appendicular syndrome, intestinal disorders and an abdominal distension as illustrated by our case. This clinical symptomatology is not very specific. In a review of 217 cases of histologically confirmed PMP, 27% had an acute appendicitis presentation, 23% had an abdominal distension as in our patient, 14% had a hernia mostly inguinal, and an isolated abdominopelvic pain in 4% of cases [4]. In women, an ovarian mass can be revealing in 20 to 39% of cases [5,6].

When it comes to imaging, abdominal and pelvic CT with contrast injection and oral markup is the gold standard [6,7]. It can guide the diagnosis when the disease has advanced, by objectifying a festooning (scalloping) of the liver and spleen, which is practically pathognomonic of Pseudomyxoma peritonei, associated to an abundant gelatinous ascites, a bilateral invasion of paracolic gutters, an omental cake and an isolation of the small intestine in the center of the peritoneal cavity [8]. In our patient’s case, CT scan allowed to bring up the diagnosis by showing a major infiltration of the peritoneum and a notched liver.

Among other imaging exams, PET-CT (positron emission tomography-computed tomography) is useful to guide the therapeutic management by evaluating the extension of the disease [9]. The usefulness of serum tumor markers is not well demonstrated, dosage of CA19-9 as a prognostic marker of relapse in treated patients has been suggested by several studies [10,11].

Definitive diagnosis is anatomopathological, based on a puncture of the gelatinous ascites fluid or peritoneal biopsies under laparoscopy. The 2010 WHO classification identifies two types of PMP: low-grade PMPs characterized by the presence of mucin pools with mucus-secreting epithelial cells, uni-stratified epithelial cell shreds and rare mitosis; and high-grade PMPs characterized by an often-high cellularity in mucin pools associated with mucinous adenocarcinoma with an invasive appearance, high grade dysplasia and more frequent mitosis [11]. Our patient had a low-grade PMP.

In the immunohistochemical and molecular study, tumors of appendicular origin express Muc2 and Muc5a, CK20, CDX2 and ACE and are negative for CK7 and CA125. This immunolabeling is useful to determine the site of the primary tumor [12].

Since 1990 and up to the present day, the gold standard in the management of this disease has been based on the combination of a complete cytoreductive surgery and Hyperthermic Intraperitoneal Chemotherapy (HIPEC) [13], which allows to obtain a 5- and 10-year overall survival of 90% and 85%, respectively [14,15]. However, it exposes the patient to a high risk of mortality and postoperative morbidity ranging respectively from 0 to 18% and from 16 to 65%, with different rates depending on the experience of the teams. This heavy treatment can only be offered to well selected patients in a good general condition.

Pseudomyxoma peritonei is a rare entity, of appendicular origin in the majority of cases. Its clinical symptomatology is nonspecific, diagnosis is brought up by imaging and confirmed by histology. Treatment of choice is the combination of complete cytoreduction and Hyperthermic Intraperitoneal Chemotherapy. Prognosis is related to the early management of the disease, the histological grade and the quality of the surgical procedure.