Copyright License: © 2018 Ramachandra S, et al. This is an open access article distributed under the Creative Commons Attribution License, which permits unrestricted use, distribution, and reproduction in any medium, provided the original work is properly cited.

43-year-old lady presented with incidentally discovered liver lesions while she was being managed for her complaints of menorrhagia. CT and MRI showed hepatomegaly with multiple lesions in both lobes of the liver with vascular element in the background of diffuse fatty infiltration. Patient underwent laparoscopic core biopsy. Histopathology showed extensive steatosis, intracytoplasmic giant mitochondria and absence of portal tracts, features highly suggestive of hepatic adenomatosis. IHC staining showed membranous and cytoplasmic positivity in hepatocytes for B-catenin consistent with multiple hepatic adenomatosis. Hepatic adenomatosis is a new clinical entity in the hepatological practice characterized by the presence of 10 or more nodules in the liver known for its major complication of bleeding. Hepatic adenomatosis is managed by regular imaging and resection of large (> 5cm) superficial and painful adenomas along with liver function tests and tumor markers to rule out malignant transformation. However, the potential cure being the liver transplantation.

Hepatic adenomatosis (HA) was first described by Flejou et al. in 1985 [1,2]. Defined as presence of 10 or more adenomas in a normal liver [1,2]. Occurs in 10-24% of all patients with liver cell adenomas [2]. Etiology is poorly understood and no definite association with the use of OCPs (oral contraceptive pills) or steroids as noted in solitary liver cell adenomas [3]. Management poses a challenge due to increased risk of bleeding and transformation to malignancy.

43-year-old lady presented with menorrhagia in the gynecological outpatient department. Ultrasonography & CT (computed tomography) evaluation showed an enlarged liver studded with nodules of fatty and vascular element. This was an incidental finding (Figure 1). Other findings included an intrauterine fibroid. Oesophagogastroduodenoscopy (OGD), colonoscopy and tumor markers were normal. Diagnostic laparoscopic examination of liver, intraoperative U/S examination and guided biopsy of the liver were done. Biopsies were taken from segments 2 and 6 and radiofrequency ablation (RFA) was done to control bleeding from lesion 2. She underwent hepatic segmental resection six months ago (3 years since the biopsy diagnosis) and RFA of the other nodules as follow-up imaging showed increase in the size of the nodules. 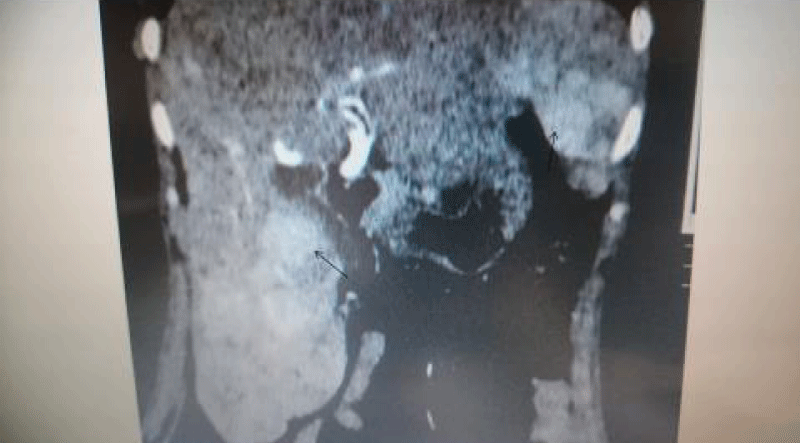 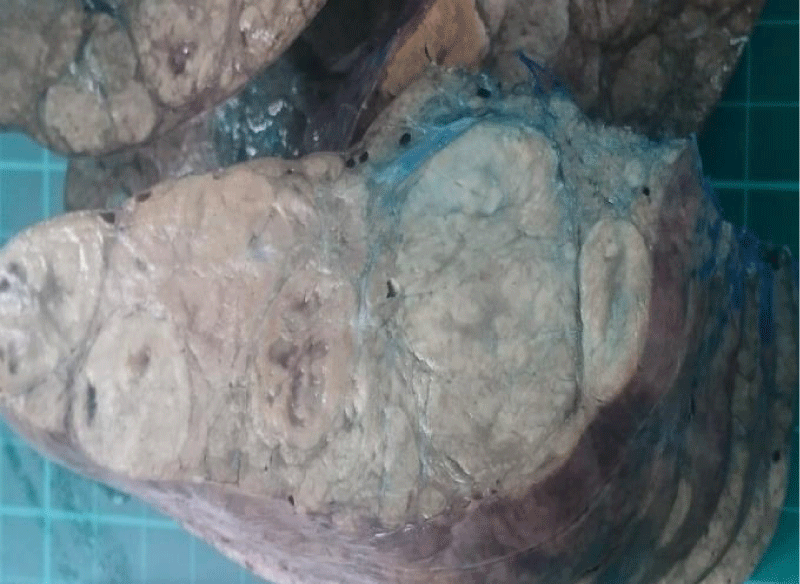 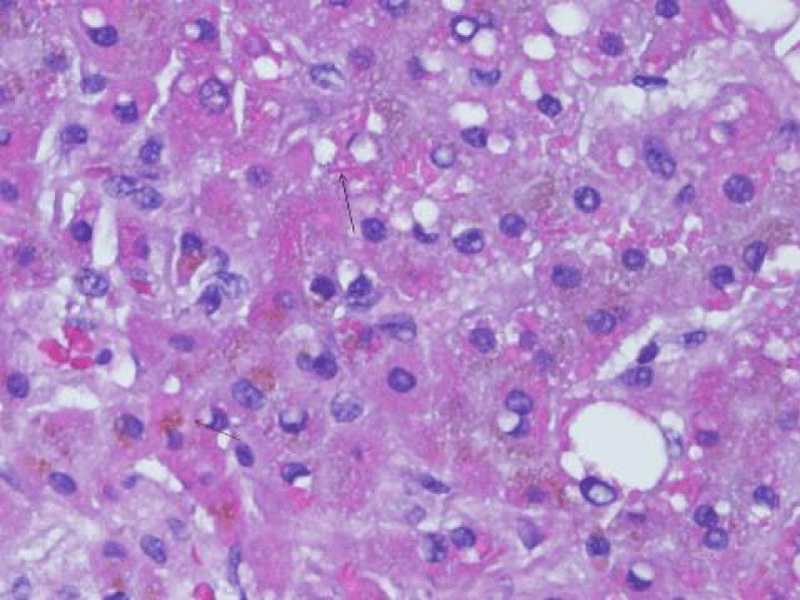 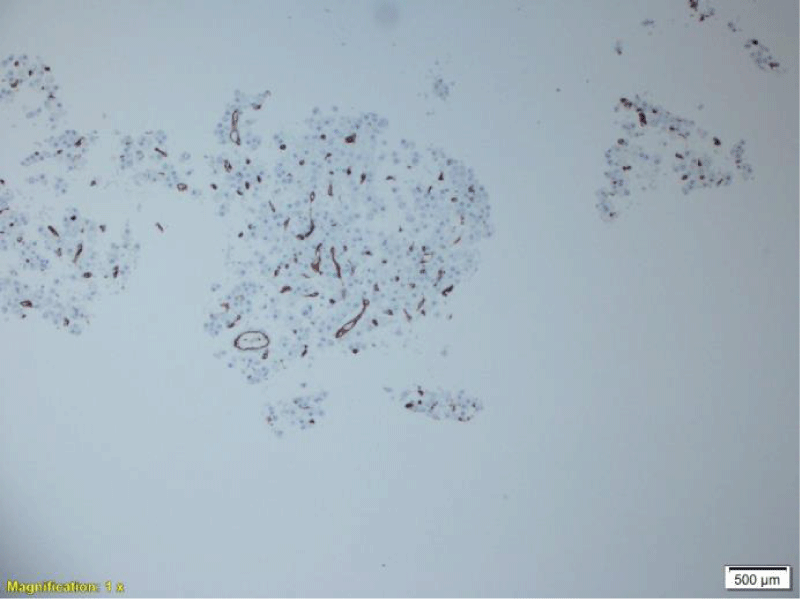 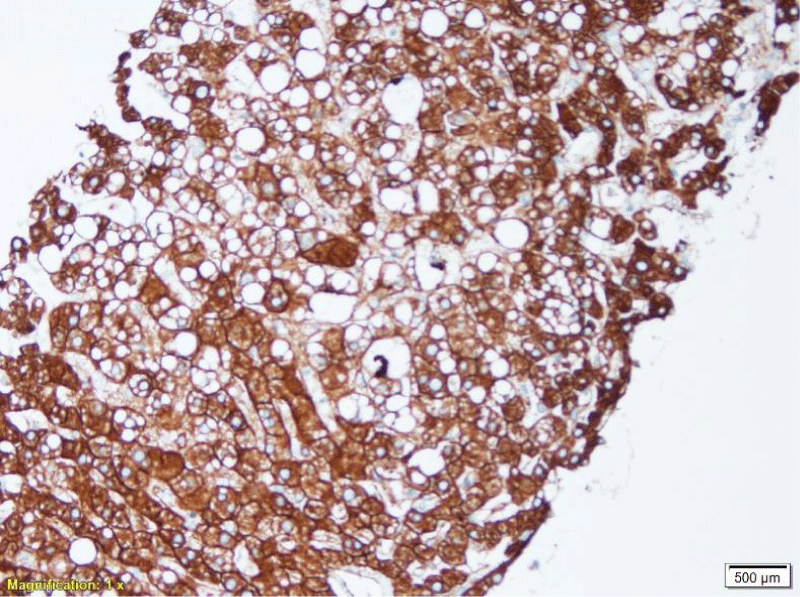 HA is an exceedingly rare disease first described by Flejou et al. It is characterized by the presence of 10 or more adenomas against the normal liver parenchyma. Occurs in 10-24% of all patients with liver cell adenomas. Etiology is not clear. Congenital and acquired abnormalities of the hepatic vasculature has been suggested as the predisposing factors for the development of HA [1]. It is not associated with the use of OCPs and or steroids unlike solitary adenomas. They can be seen with glycogen storage disease. Female preponderance with elevated levels of serum alkaline phosphatase and gamma-glutamyltransferase (GGT) is generally noted [3,4]. In cases with necrosis, serum aminotransferase was found to be elevated [4]. Our patient had elevated liver enzymes with normal GGT. Size of the nodules range from 2 to 10 cm.2 Nodules can be confined to one lobe or diffuse. Based on their nodular sizes two distinct patterns have been described. Massive type with large nodules, hepatomegaly and deformed liver contour. The multifocal type with smaller nodules upto 4 cm and undistorted liver contour. The latter group of patients are unlikely to develop symptoms and appear to have a less aggressive clinical course [1]. Our patient had more than 10 nodules in both lobes of the liver ranging from 2 to 5 cm.

Ultrasonography and noncontrast CT images show hypo or isodense lesions. Postcontrast images show homogenous hypervascular enhancement during the arterial phase.1 MRI shows mild hyperintense lesions on T2 sequence [1]. The symptomatic patients usually present with mass abdomen or pain in right upper quadrant attributed to bleeding. Most of the patients are asymptomatic, the condition being detected incidentally while being evaluated for some other ailment as in our case. Grossly, the liver shows yellow-tan nodules. Associated fatty change and hepatomegaly maybe noted. Microscopy shows benign hepatocytes with one or two cell thick liver plates and absence of portal tracts. It is characterized by various materials and inclusions like Mallory hyaline, lipofuscin and giant mitochondria are noted [3]. Our case showed similar findings. The great mimicker of this lesion is fatty liver. Absence of portal triads and sinusoidal capillarization along with radiological findings help to differentiate it from the fatty liver.

These cases are managed by regular imaging studies, liver function tests and tumor marker analysis to detect increase in the size of the nodules or progression to malignant transformation [2]. Intralesional or intraperitoneal bleeding is a major complication in large (> 5 cm) and subcapsular lesions [2]. Our case is being followed up since 2014. A slight increase in the size of one to two nodules is noted in the recent scan. Maximum size of the nodule is 5 cm. She is asymptomatic and no episodes of bleeding reported other than following biopsy. Her tumor markers have remained normal. Due to increase in the size of the nodules the patient was managed by hepatic segmental resection in 2018. Large or symptomatic lesions are treated by surgical resection. Other options include embolization of bleeding nodules and RFA. Initially, our case was managed by RFA following the biopsy to control bleeding. Recently, segmental hepatic resection with RFA was done. Of 81 cases of HA documented in the literature 7% have developed malignancy [1,2]. Liver transplantation is the only potential cure to prevent bleeding and development of cancer whose benefits have to be balanced against the potential risk of transplantation [1,2].

HA is a recently described clinical entity with presence of 10 or > adenomas in a normal liver or sometimes in a background of fatty liver. The aetiology is poorly understood with no relation to OCPs or anabolic steroids. HA is clinically challenging as bleeding and or rupture into peritoneal cavity is a major complication. Large and symptomatic adenomas accessible to surgery are resected. Malignant transformation of the lesion is another important risk which necessitates regular assay of tumor markers along with regular imaging. Though liver transplantation is the potential cure, its benefits are outweighed against the risks of transplant itself. HA is diagnostically challenging as well, being a rare case.