Copyright Licence: © 2019 Altintas AGK. This is an open access article distributed under the Creative Commons Attribution License, which permits unrestricted use, distribution, and reproduction in any medium, provided the original work is properly cited.

Cystoid macular edema is a common cause for unexplained painless vision loss after cataract surgery. Even the pathogenesis of pseudophakic cystoid macular edema (PCME) still remains undefined, it can most frequently occur in eyes with high vasoactive profile, had complicated cataract surgery such as posterior capsule rupture and risk of inflammation. Increased inflammation, ultimately leading to the breakdown of the blood-retinal barrier and cystic accumulation of extracellular intraretinal fluid. The natural history of PCME is spontaneous resolution without any treatment in most of patient, but it may take weeks or months, in addition permanent visual morbidity may occur in some cases. Therefore there is lack of consensus regarding treatment approach for this common ocular condition.

In this review treatment alternatives of PCME and its relation with underlying patho-physiologic mechanism are evaluated.

Pseudophakic cystoid macular edema (PCME) also known as Irvine-Gass syndrome (IGS), was initially reported by Irvine in 1953. Gass and Norton subsequently reported its characteristics with fluorescein angiography [1-4]. IGS remains an important cause of painless decrease in vision following cataract extraction and intraocular lens (IOL) implantation. IGS is most frequently occurs in patients had glaucoma treated with prostaglandin drops and posterior capsule ruptured eye during the cataract surgery. This syndrome is present in around 4–12 weeks after cataract surgery and often resolves spontaneously in 70-90 % of the cases; which can takes from 2 months to a year. Epidemiological studies show that, 50% of these cases have resolution within 6 months after surgery, and 90% of them in 2 years [3-7].

The patho-physiologic mechanism for IGS is multifactorial including excessive surgical trauma increased inflammation, posterior capsule rupture, evitreous disturbance, hypotony. Surgical trauma triggers the cascade of inflammatory reactions, leading to conversion of arachidonic acid to prostacyclins, prostaglandins thromboxanes, leukotriens and other inflammatory mediators. These inflammatory mediators cause the breakdown of the blood–retinal barrier that ultimately increased retinal capillary permeability and extracellular fluid accumulation mainly in the outer plexiform and inner nuclear layers characterized by petalloid perifoveal leakage on fluorescent angiography (FA). Hyperfluorescens of optic nerve head on the later stage of FA without retinal hemorrhage, vascular torsisity and exudates are the important sings of PCME (Figure 1). Increased macular thickness with cystoid empty spaces, corresponding to petalloid leakage on FA, in optical coherent tomography (OCT) is one of the significant finding of postoperative CME (Figure 2a,b) Increased prostaglandins within the eye also cause vasodilation and leukocyte migration. With these process, Müller cells become swollen and lysed than eventually developed cystic changes that result in varying degree of decrease in visual acuity. This detrimental effect on visual acuity may occasionally persist and lead to permanent vision loss [3,5,7-9]. 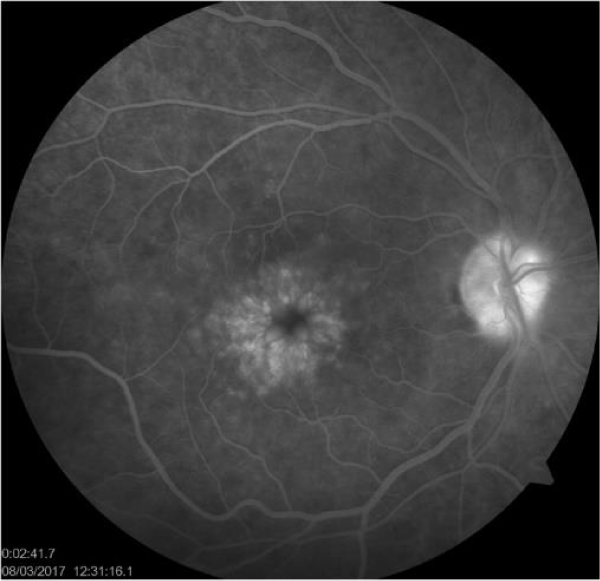 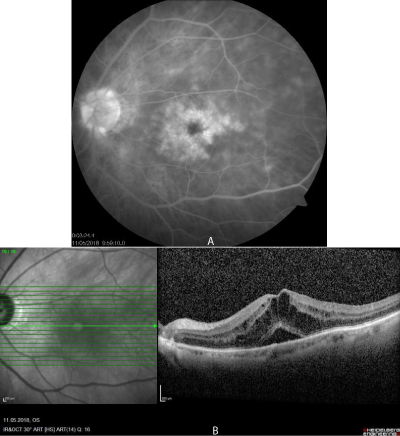 Figure 2: Macular petalloid leakage and optic nerve head hyperflourescens on fluorescein angiography in eyes with Irvine Gass syndrome. b: Cystic macular edema in the same eye of the same patient evaluated by OCT in the same day.

Prophylaxis: Prophylaxis is recommended mainly for patients who have the risks of developing cystoid macular edema after cataract surgery, such as patients with diabetes, retinal vein occlusion, uveitis and patients with glaucoma treated by topical prostaglandin eye drops. The incidence of IGS has been reported 0.1- 5% according to different reports, Several meta-analyses and systematic reviews have reported that a significant reduction in incidence of CME after cataract surgery with prophylactic use of topical nonsteroidal anti-inflammatory drugs (NSAID), including ketorolac 0.4%, bromfenac 0.1%, nepafenac 0.1% and diclofenac 0.1%. Topically applied NSAIDs reduce prostaglandin synthesis by inhibiting the cyclooxygenase-1 (COX-1) and cyclooxygenase-2 (COX-2) enzymes [10-14]. Topical anti-glaucoma treatment rather than prostaglandin at least one week before surgery can reduced the risk of PCME development.

In systematic reviews and meta-analysis of randomized controlled trials have reported the effects of prophylactic topical NSAIDs; either as monotherapy or combined with topical corticosteroids, appear to be more effective than topical corticosteroids such as betamethasone, fluorometholone, dexamethasone or prednisolone asetonide alone to reduce the risk of developing PCME within 3 months after surgery. Similarly, results of controlled trials showed that the prevalence of CME 1 month after surgery was significantly lower among patients treated with NSAIDs (3.8%) comparing to patients treated with either potent or weaker corticosteroids (25.3%) [12-17].

There is no standardized treatment protocol for Irvine-Gass syndrome due its multifactorial pathogenesis and spontaneous resolution in most of the cases. Spontaneous resolution without any treatment, may take weeks or months, so for patients, especially those who have vision-dependent occupations and live active lifestyles, treatment should start as early as possible [10-13].

The most frequently applied treatment choice include aggressive topical steroids, with or without NSAIDs, aimed at minimizing inflammation. Even in an analysis of several placebo-controlled trials, macular edema was reported in 0.7% in eyes receiving bromfenac 0.09% while 1.4% of patients receiving placebo, the benefits of topical NSAIDs in treating PCME are not well demonstrated comparing to their prophylactic effects. In addition combination therapy with corticosteroids and topical NSAIDs significantly more effective than corticosteroids alone in treating IGS [12-16].

Administration of corticosteroids through various routes, other than topical application have been used for several years mostly. But still there is a little consensus on the efficacy of various therapeutic options such as, peribulbar, retrobulbar, or intravitreal in patient with foveal thickness more than 250 μm lasting for at least 90 days after the initiation of topical treatment [16-18].

Randazzo et al. [19], reported a significant decreased in foveal thickness after 0.8 cc of 4 mg betamethasone sub-Tenon injections. They also observed reduction in metamorphopsia and improved color sensitivity with this treatment.

The sub-Tenon route is considered equal to the retrobulbar route in terms of efficacy, but the sub-Tenon route is generally considered safer with respect to IOP elevation. On the other hand result of several studies showed a significant IOP rise with the use of triamcinolone acetonide (TA) that did not correlate with the route of application. According to most of reports in the literature, there is a common opinion about a higher incidence of IOP elevation beyond 30 mm Hg following intravitreal triamcinolone acetonide (IVTA) injection which has higher intravitreal concentration compared to peribulbar injection [17-19].

Dexamethasone as another corticosteroid has a 6-fold more potent anti-inflammatory effect than TA. One of the other disadvantages of IVTA is the transient therapeutic effect necessitating repeated injections. Sustained-release dexamethasone implant (Ozurdex) (Allergan, Inc.) have been developed to overcome this problem which sustained steroid levels and biological activity for 6 months, with peak levels of drug remains in the first 3 months [20-24]. This biodegradable systems made of poly lactic acid-co-glycolic acid (PLGA) matrix material which dissolves completely in the vitreous and provides sustained release of 0.7 mg of preservative-free dexamethasone during 6 months period (Figure 3) [20-22]. 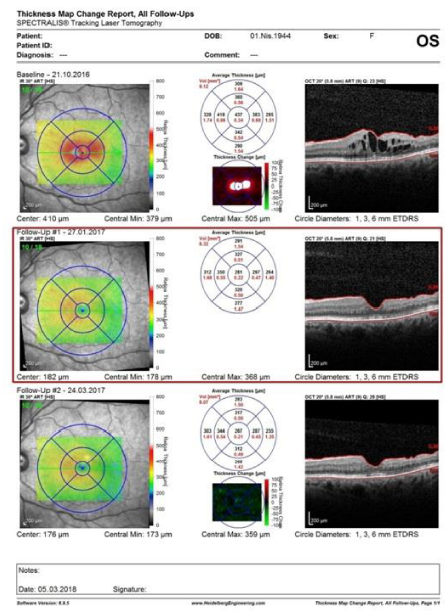 Figure 3: Differential map between the first and the last OCTs showed a foveal thickness reduction after treatment with dexamethasone implant (Ozurdex).

Williams et al. [21] observed a considerable improvement in BCVA from 0.3 lines pre-Ozurdex injection to 0.8 lines post-Ozurdex injection. Similarly Mayer et al. [22] reported that the mean VA increased from 30.2 letters at baseline to 50.4 with the ozurdex treatment while the foveal thickness decreased from 520.8 ± 71.4 μm to 232.7 ± 26.6 μm at 12 months. Landré et al. [23], reported a significant improvemed in term of macular edema treatment in which the mean central foveal thickness decreased from 598 μm. to 286 μm at month 1, 338 μm at month 3, and was 441 μm at month 12 with Ozurdex injection. They reported that some of their patients needed another dexamethasone implant injections. Klamann et al. [24] reported that 66% of their patient out of 12 patients needed more than one injection and recurring macular edema had been completely reduced by repeated injections.

Bellocq [25], reported that even 49% of 50 patient received a second Ozurdex injection and by this treatment neither functional nor anatomical recurrence was observed at least 1 year followed-up. They reported a significant decrement in macular thickness which was 544±117.2 μm before treatment and decreased to 302 μm and 61.2% of patients had an increase of more than 15 letters with the Ozurdex treatment. A good anatomic and functional response and safety patterns were similar in each injection which demonstrating Ozurdex's reproducibility.

Altintas et al. [26] reported a significant reduction in macular thickness with a single Ozudex implantation from 733 u to 197 u in eyes with unresponsive to intravitreal Anti-VEGF who is using inhaler steroid. This report showed that PCME can be developed even under systemic steroid treatment and intravitreal Ozudex implantation can be effective in such a difficult patient.

Despite the treatment options for IGS include NSAID and corticosteroids new fields of clinical research including the use of anti-vascular growth factors considered a good therapeutic choice [30].

Vascular endothelial growth factors (VEGF) are inflammatory mediators which induce vascular permeability by their indirect effect on vascular endothelial cells. They have a beneficial effect on the macular architecture, in the onset of macular edema because the inflammation is the major etiologic factor in the development of IGS. Successful treatment of IGS with intravitreal injection of either 1 mg or 1.25 mg bevacizumab (Avastin), a monoclonal antibody against all VEGF isoforms have been reported [30-32].

According to Mitropoulos et al. [33] report, single injection of Anti-VEGF was sufficient for the resolution of ME, while recurrence was observed in 1 patient out of 7 eyes.

Demirel et al. [34] reported a significant reduction in CMT after Intravitreal (0.5 mg/0.05 mL) ranibizumab injection in 2 eyes. Mason et al. [35], reported 2 patients with persistent IGS who had nearly immediate improvement of visual acuity 4 to 5 lines and a complete resolution of ME after a single intravitreal injection of 1.0 mg bevacizumab without further treatment. In contrast to this promising success rate Spitzer et al. [36] ,reported that visual functional improvement did not observed in most eyes with neither single nor repeated injection of bevacizumab at least when the drug is used as a mono- therapy. They reported that, eye received repeated injections had fluctuating levels of central retinal thickness, significantly lower thickness was observed after each injection but it increased again 6 to 10 weeks later.

Result of these clinical outcomes intravitreal ranibizumab and bevacizumab have been shown to be effective in some, but not all cases.

Mineralocorticoid receptor antagonists and spironolactone therapy, have been reported by Matet and coworkers [37], as an efficient combination with topical dexamethasone in refractory cases following complex cataract or retinal detachment surgery.

IFN alpha-2a at a dose of 3 million IU/day subcutaneously for 4 weeks has been demonstrated to be a successful treatment option for resistant chronic PCME in without any systemic or local side effects [38]. But it can be prefer only if other alternative methods are ineffective for treatment of PCME (Table 1).

Vitrectomy with removal of epiretinal membrane should be considered as a treatment modality in eyes had vitreomacular traction since tractional component may have adverse effect on the pathogenesis of PCME [39].