Copyright: © 2018 Altintas AGK, et al. This is an open access article distributed under the Creative Commons Attribution License, which permits unrestricted use, distribution, and reproduction in any medium, provided the original work is properly cited.

The Cloquet’s canal (CC) or hyaloid canal is the remnant of the primary vitreous that surrounds the hyaloid artery in intrauterine period [1,2]. CC is measured from 1 mm to 2 mm in width and from 4 mm to 5 mm in length and it reaches from the optic disc to the retrolental space. CC disappears in the intrauterine developmental period of the eye, nevertheless it can persist in healthy mature eyes and commonly it cannot be clearly visualized with ophthalmoscopic examination [3]. In this report, we presented a case with low visual acuity due to persistent CC.

Thirty-six year-old, Caucasian, male patient presented to our clinic with complaint of low vision in his right eye. Best corrected visual acuities were 20/50 in the right eye and 20/20 in the left eye. Ocular motility, intraocular pressure and anterior segment examinations were completely normal. A persistent CC, Bergmeister papilla, and peripapillary pigment epithelial alterations were seen in right fundus after pupillary dilation (Figure 1). Fundus fluorescein angiography and optical coherence tomography imaging was performed to show leakage from remnant of hyaloid artery and macular configuration. There was no fluorescein leakage during arteriovenous phase and venous phase but late staining of the disc and CC tissue was observed during the recirculation phase as hyperfluorescence tissue elevating into the mid-vitreus. Other arterial, venous vascular tissues and macular configuration was normal (Figures 2,3). Posterior segment of the left eye was normal. There was no any important feature in the medical, personal, social and family history of the patient. Except refractive correction, we did not plan any medical or surgical manipulation for persistent CC and regular ophthalmological examination was advised to our patient. We did not see any ocular complication related persistent CC for 2-year follow-up period. 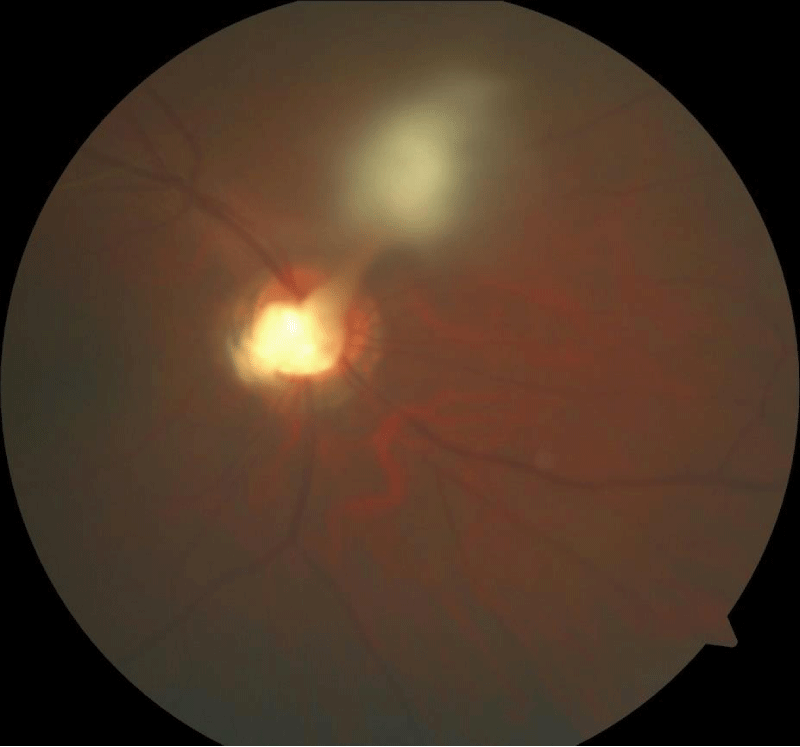 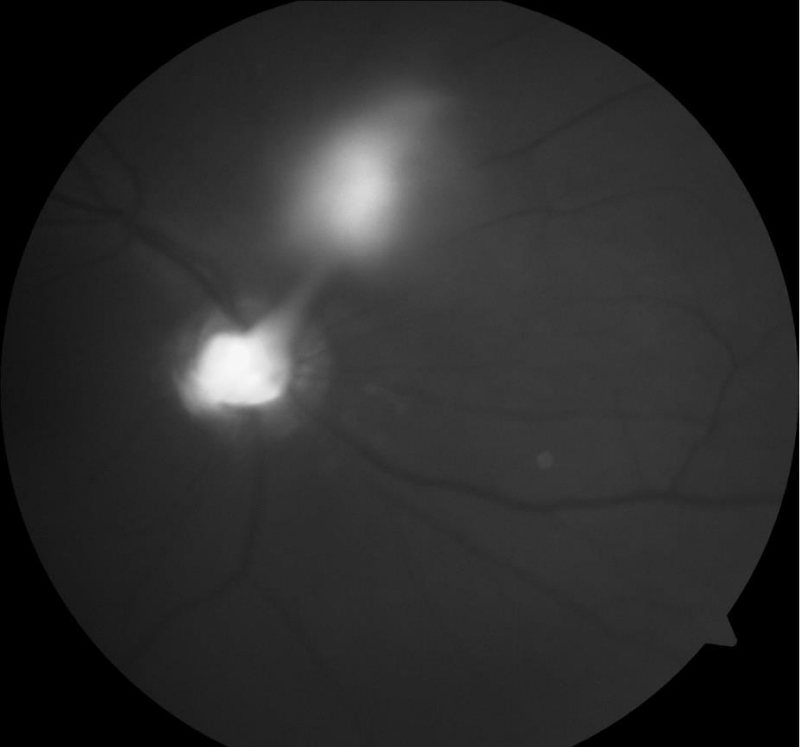 Persistent CC can be incidentally detected in eyes underwent ophthalmoscopy. It cannot effect visual acuity in many eyes [4,5]. Associated optic disc anomalies, intravitreal opacity and cataract are responsible from low visual acuity in others. Persistent CC in our case, causes vitreous opacity and decreased visual acuity. We performed fundus fluorescein angiography to see any leakage from persistent CC because there is a case report in literature that show persistent CC can bleed in any time of life [6]. It theoretically damages macular configuration with results of intravitreally hemorrhage and fibrovascular contraction distorted posterior pole and this damage can be revealed via optical coherence tomography. Macular configuration was completely normal in optical coherence tomography. Fundus fluorescein angiography showed late staining of the disc and CC tissue, this finding may be an indirect evidence of persistence of vessel remnant. As we did not evaluate patient during the childhood we did not exactly know if it bleed into the vitreous or not. Therefore low visual acuity may directly associated with opacification of the fibrovascular persistent CC tissue or deprivation amblyopia due to previous possible vitreous hemorrhage even we did not observed any ocular complication related persistent CC for 2-year follow-up period.

In conclusion, persistent CC that is a rare congenital anomaly, can cause low visual acuity due to even directly media opacity effect of fibrovascular tissue without any complication, it may have potential of bleeding if it has persistent vascular tissue.