Copyright Licence: © 2018 Altintas AGK, et al. This is an open access article distributed under the Creative Commons Attribution License, which permits unrestricted use, distribution, and reproduction in any medium, provided the original work is properly cited.

Irvine-Gass syndrome, is one of the most common causes of painless decrease in vision following even uneventful cataract surgery. It usually responds well to medical therapy, but, there are no widely acceptedconsensus on the efficacy of various therapeutic options for the treatment of Irvine-Gass syndrome. The patient presenting in this case report, has systemic hypertension and chronic obstructive pulmonary disease and he use oral anti-hypertension medication and inhaler steroid. He diagnosed as Irvine-Gass syndrome due to presence of decrease in visual acuity and macular edema with hyporeflective cystic intraretinal spaces in optical coherence tomography (OCT) since4th weekcontrol visitfollowing uneventful cataract surgery. After the responsiveness of several medications including topical steroid and non-steroidal anti-inflammatory drugs and intravitreal injection of anti-vascular endothelial growth factor (anti-VEGF), intravitreal sustained-release dexamethasone implant was applied. The visual acuity improved to 0.00 logMAR at 1st month after intravitreal dexamethasone therapy and consecutive OCT images showed complete resolution of macular edema with a normalization of the foveal profile.The visual acuity and foveal architecture remained stable in 2-year follow-up period and additional treatment was not needed. To the best of our knowledge, this is the first reportthatmentions the increment of visual acuity after a single dexamethasone implant, even though it did not response anti-VEGF combined with topical steroid and non-steroidal anti-inflammatory drugs.

Pseudophakic cystoid macular edema (CME) also known as Irvine-Gass syndrome, is one of the most common cause of painless decrease in vision following even uneventful cataract surgery [1]. The pathogenesis of this syndrome reported to be multifactorial. Its incidence is higher in patients with vasculopathy, hypertension, uveitis [2-4]. Irvine-Gass syndrome is usually self-limiting and spontaneous resolution occurs within 3-6 months [5]. But in some cases, it persists for more than 6 months and considered as chronic pseudophakic CME [6,7]. Even it usually responds well to medical therapy, still there are no widely acceptedconsensus on the efficacy of various therapeutic options for the treatment of Irvine-Gass syndrome. Topical/periocular corticosteroids and intravitreal anti-vascular endothelial growth factor (anti-VEGF) are potent anti-inflammatory agents that can inhibit development of Irvine-Gass syndrome. Intravitreal sustained-release steroid implants can be effective in recalcitrant cases by its high potential anti-inflammatory and anti-edema effect [8,9].

In this case report, we presented an Irvine-Gass syndrome using inhaler steroid, treated by intravitreal sustained-release dexamethasone implant that did not response to all of topical steroid, non-steroidal anti-inflammatory drug (NSAID) and intravitreal anti-VEGF injection.

A 61-year-old male presents to our clinic with progressive blurred vision secondary to 4+ nuclear sclerotic cataract (according to lens opacities classification system II) on his right eye [10]. He underwent a complete ophthalmologicalevaluation, including best-corrected visual acuity (BCVA), tonometry, slit-lamp biomicroscopy and posterior segment examinations. His BCVA was 1.00 logMAR in his right eye. Preoperative spectral domain optical coherence tomography (SD-OCT) (Spectralis®, Heidelberg Engineering, Heidelberg, Germany) examination showed normal macula bilaterally. He hadno any other ocular disease except senile cataract. But he had significant systemic hypertension, which was well controlled with oral anti-hypertension medication. Even he was suffering from chronic obstructive pulmonary disease (COPD) he smokes at least 20 cigarettes per day. He was under treatment for COPD includingoral inhalator which contains corticosteroid.

Theright eye of patient underwent uneventful cataract surgery and intraocular lens (IOL) implantation. Postoperative day 1, cornea was clear, no reaction was noted in the anterior chamber,pupil was round and IOL was stable. His BCVA was 0.30 logMAR and intraocular pressure (IOP) was 14 mmHg. A routine postoperative treatment regime was recommended which are topical ciprofloxacin(Vigamox®, Alcon Laboratories Inc., Fort Worth, Tx, USA) for a week and dexamethasone 0.1% (Maxidex®, Alcon Laboratories Inc., Fort Worth, Tx, USA)for a month. His BCVA was 0.10 logMAR at postoperative day 7, but postoperative week 4, he presented with progressive visual deterioration which decreased to 0.70 logMAR even he continuously receives dexamethasone 0.1%. He had no sign of inflammation both in anterior chamber and the vitreous. But dilated fundus examination revealed a loss of the foveal depression in his right eye and normal foveal reflex in the left eye.SD-OCT evaluationshowed the macular edema with hyporeflective cystic intraretinal spaces in the right eye while the left eye was normal.To reduced macular edema, ketorolac 0.5% (Acular®, Allergan, Inc., Irvine, Calif, USA) 6 times per day was recommended in addition to 0.1% dexamethasone 4 times per day. But the patient did not respond to topical therapy. One month later his BCVA still remain in 0.70 logMAR and macular edema was persisted on SD-OCT re-evaluation. 1.25 mg intravitreal bevacizumab (Avastin®, Genentech Inc., San Francisco, CA, USA) injection was performed in the operation room. Topical antibiotic and steroid were received similar to treatment after cataract surgery. Serious ocular reaction or systemic adverse events were not observed.Even his BCVA slightly improves to 0.50 logMAR, his complains remained. SD-OCT re-evaluation showed persistent macular edema. The central macular thickness (CMT) was 733µm in the right eye with prominent macular cysts while it was 250 µm in non-operated left eye. For another treatment option for recalcitrant macular edema,an intravitreal sustained-release dexamethasone implant (Ozurdex®, Allergan, Inc., Irvine, Calif, USA) was performed. A 22-gauge needleand special single-use applicator was used to implant a dexamethasone through a self-sealing scleral injection. Topical antibiotic and steroid were received. After intravitreal implantation, he was evaluated monthly and ocular reaction or IOP elevations were not observed throughout the follow-up period.

The CMTdecreased from733µm to 350 µm, 264 µm and 197 µm after intravitreal dexamethasone therapy month1, 10 and 24, respectively. ConsecutiveSD-OCT images showed complete resolution of CME with a normalization of the foveal architecture. The BCVA improved to 0.00 logMAR at 1st month after intravitreal dexamethasone injection and remained the same without any subjective complain. The IOP remained stable at 17 mmHg. Another injection was not needed in two-year follow-up period. Figure 1 shows the consecutive SD-OCT images of the patient who gave written consent to use of images for academic purposes. 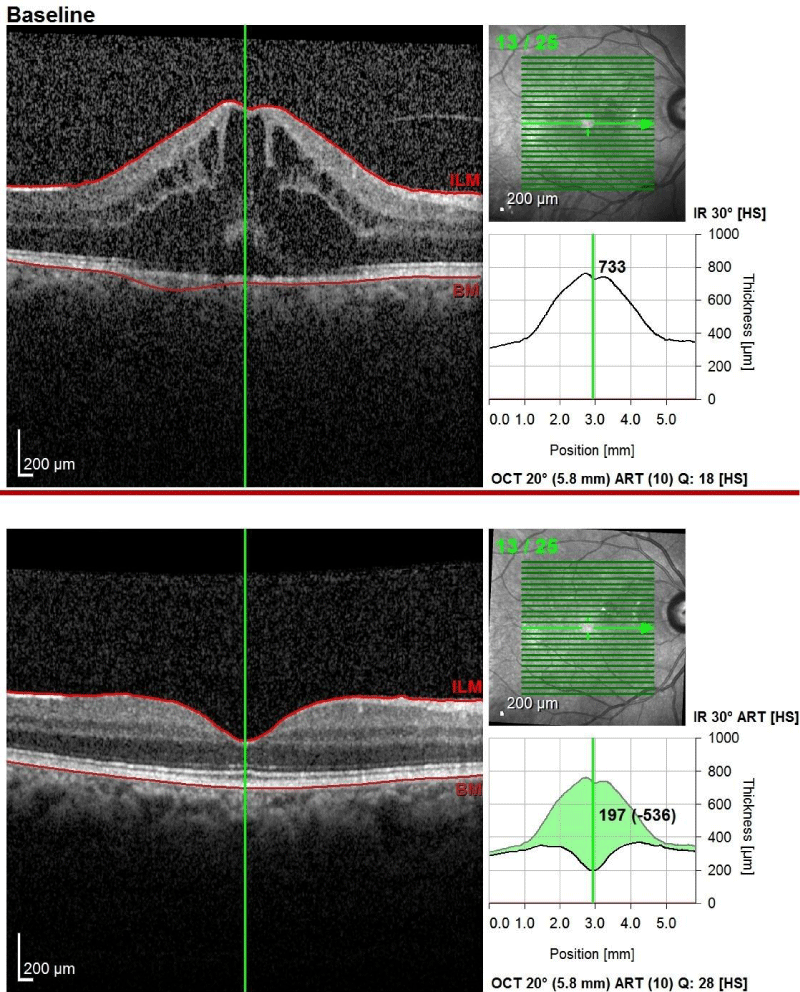 Figure 1: The optical coherence tomography images of before and after the intravitreal dexamethasone implantation and the graphic of central macular thickness’ recovery.

Despite significant advances in phacoemulsification procedure, Irvine-Gass syndrome continues to be an important differential diagnosis in postoperative blurred vision.SD-OCT evaluation is a non-invasive repeatable method which able to investigate of retinal morphology and macular thickness [6,7]. To evaluate the decrement of BCVA in our case at postoperative month 1, we performed the SD-OCT as recommendedand found significant increment of CMT and the present situation was diagnosed as Irvine-Gass syndrome.

According to previous studies, to give a chance ofspontaneous resolution, 3 months of observational period was recommended, before start the therapy [1,5]. Waiting in this period is so difficult for patientsthose have active lifestyles or have vision-dependent occupations. So, we started topical NSAID treatment at postoperative month 1, in addition to topical steroid which was given for post-cataract treatment. Even still, there are no evidence-based guidelines for the treatment of Irvine-Gass syndrome, several studies have reported significant reductions in the macular edema with the topical therapy, after cataract surgery [11-14]. Combination therapy with topical NSAID and corticosteroidis significantly more effective than only corticosteroid in treatment of Irvine-Gass syndrome [15]. But the presented patient did not well respond to topical therapy in terms of improving his BCVA and reduction ofCME at SD-OCT, so further intervention was needed.

VEGF inhibitors effect on vascular endothelial cells by reducing vascular permeability andprevents macular architecture, therefore they have indirect effect in treating Irvine-Gass syndrome. VEGF is also inflammatory mediators and inflammation is the major etiologic factor in the development of Irvine-Gass syndrome [14,16]. Reported almost immediate improvement of BCVA and complete resolution of CME after a single intravitreal injection of 1.25 mg bevacizumabwhich is a monoclonal antibody against all isoforms of VEGF-A and the improvement was stable for several months without further treatment. On the other hand,Spitzer [17], observed that even the CMTimproved significantly in 81% of their sample after 1.25 mg intravitreal bevacizumab injection, but, it did not translate into functional BCVA improvement.They reported that this discordance may be due to the decrease inCMTwas not sufficient in most patients and still had considerable macular edema after the intravitreal bevacizumab injection [17]. We treated the patient withinjection of intravitreal bevacizumab and our patient showed a partial resolution of CME with aslightly improvement of his BCVA to 0.50 logMAR similar to series of [16]. Therefore, there is little consensus on the efficacy of various intravitreal anti-VEGF treatment systematic in Irvine-Gass syndrome [18]. Observed that one intravitreal injection of another anti-VEGF, ranibizumab (Lucentis®, Genentech, San Francisco, CA, USA) appeared to be sufficient for the resolution of CME, while recurrence was observed in 1 patient out of 7patients [19]. Reported thatafter 1 injection of intravitreal ranibizumab, CMT was decreased from 379 μm to 227 μm in one patient and it was decreased from 419 μm to 243 μm after 2 injections of intravitreal ranibizumab in another patient. The CMT’s of these patients were much lower than that of our patient which was 733 μm and our patient’s partial response of anti-VEGF therapy may be due to more prominent CME.

Glucocorticoids are potent anti-inflammatory drugs which effects several pathways such as increasing the activation of anti-inflammatory genes, inhibiting VEGF synthesis and reduce vascular permeability. Corticosteroids can be used in several different ways such as topical, periocular or intravitreal. Intravitreal injection of triamcinolone and dexamethasone are reported to be effective in treatment of Irvine-Gass syndrome [20,21]. Sustained-release dexamethasone implant is a biodegradable ocular implant which is gradually release in around6-month period [21,22], treated 9 patients with Irvine-Gass syndrome with a dexamethasone implant and observed clinical improvement from baseline by 1st month after treatment and it was remained throughout the 6-month. But [23], did not observe any decrementinCMTuntil2ndmonthand recurrences were detected at the 3rdmonth of treatment in which 49% their cases received a second injection. Similarly, [24] reported that recurrences occurred in 9 patients out of 23 with a peak after 3 months. In presenting patient, we observed asingle dexamethasone implantation appeared to be sufficient for the resolution of CME in recalcitrant eye that was not responded both topical treatment combine with corticosteroid and NSAID, and intravitreal anti-VEGF injection. TheCMTevaluating by SD-OCT was significantly correlated with BCVA improvement. In two-yearfollow-up,CME did not recur and BCVA remained 0.00 logMAR.

Our patient has been using steroid inhalation for treatment of COPD when Irvine-Gass syndrome was developed. As far as we know ours is the first case who developed Irvine-Gass syndrome under systemic steroid treatment via nebulizer. In addition, he was the first case who hasthe increment of visual acuity after a single dexamethasone implant, even though it did not response anti-VEGF combined with topical steroid and non-steroidal anti-inflammatory drugs. Early diagnosis and prompt treatment with intravitreal dexamethasone implantation decrease the risk of irreversible damage to the retinal cells, lead to complete recovery of visual acuity in patients with Irvine-Gass syndrome.