Comparison of Efficacy and Safety of Hydroxychloroquine and Teneligliptin in Type 2 Diabetes Patients who are Inadequately Controlled with Glimepiride, Metformin and Insulin therapy: A Randomized Controlled Trial with Parallel Group Design

Copyright License: © 2018 Ranjan P, et al. This is an open access article distributed under the Creative Commons Attribution License, which permits unrestricted use, distribution, and reproduction in any medium, provided the original work is properly cited.

Aim: The aim of the present study is to assess the efficacy and safety of Hydroxychloroquine in comparison with Teneligliptin in type 2 diabetes patients whose blood glucose levels were inadequately controlled with metformin, Glimepiride and insulin therapy.

Methods: This was a randomized, prospective, parallel-group, experimental trial done in 300 Type 2 Diabetes patients who were uncontrolled (HbA1c=7.5–10%) with metformin, Glimepiride and insulin therapy. Patients were randomly divided into two groups one received Teneligliptin 20 mg (n=152) and other received Hydroxychloroquine 400 mg (n=148) while continuing insulin therapy with other 2 OHA. Insulin doses were adjusted to maintain normal blood glucose levels.

Conclusion: Hydroxychloroquine decreases HbA1c in patients whose type 2 diabetes is poorly controlled with high doses of insulin as compare to Teneligliptin. Addition of hydroxychloroquine to insulin therapy is also associated with reduced incidence of confirmed and severe hypoglycaemia.

Diabetes is progressive in nature and the substantial evidence supporting the beneficial effects of insulin regimens, as it not only maintains glycemic control as well as reduce morbidity and mortality rates associated with diabetes and its related complications [1,2]. Insulin therapy strongly ameliorates hyperglycemia but has adverse effects such as hypoglycemia [3] and weight gain, which might increase the incidence of cardiovascular events. These adverse events can be minimized by the initial use of insulin in combination with oral antidiabetic agents [4]. The advantages of concomitant therapy are not only improvement of glycemic control but also a reduction in the number of insulin injections and titration of the insulin dose.

Teneligliptin has unique J shaped or anchor locked domain structure because of which it has a potent inhibition of DPP 4 enzyme. Teneligliptin significantly controls glycemic parameters with safety. Teneligliptin have a structure which is unique and binds to S1, S2, and S2 extensive sub site of DPP-4 enzyme. It is recommended Once-a-day administration [5]. Moreover multiple trails [6-9] on DPP-4 inhibitors have shown better glycemic control in type 2 diabetes mellitus patients and these patients had minimal risk of hypoglycemia and weight gain.

Hydroxychloroquine inhibits insulin degradation and improve insulin sensitivity. A few randomized controlled trials showed that HCQ lowers HbA1c and LDL cholesterol levels in patients with type 2 diabetes [10]. Furthermore, in a prospective, randomized, placebo, double-blind 6-month trial the addition of Hydroxychloroquine to either insulin or glibenclamide in the treatment of refractory noninsulin-dependent diabetes for 6 months resulted in a significant decrease in HbA1C by 3.3% compared with placebo as well as a reduction in insulin dose by 30% in the insulin-treated group [11]. In a recent RTCT trial conducted by Baidya et al. [12], confirms that in type 2 diabetes patients who are poorly controlled, addition of hydroxychloroquine (HCQ) to insulin along with Glimepiride and Metformin, there was significant overall mean change in total daily insulin dose at study end by almost 28% with a HbA1c reduction of -1.3% from baseline within 6 months. When Hydroxychloroquine was evaluated against Teneligliptin in patient who were uncontrolled on Metformin 2000 mg and Glimepiride 2 mg, a further HbA1c reduction of -1.8% happened with Hydroxychloroquine than compared to Teneligliptin with which it was -1.3% [13]. Even in few trials [14,15] Hydroxychloroquine exhibit a potent efficacy even comparable to other DPP4 inhibitors like Vildagliptin and Sitagliptin.

The main purpose of the trial to compare the efficacy and safety of Hydroxychloroquine and Teneligliptin in Type 2 Diabetes Patients Who Are Inadequately Controlled with Glimepiride, Metformin and Insulin therapy. This is particularly important because as diabetes progresses its management becomes increasingly difficult. Patients often have multiple comorbidities requiring pharmacological treatment. Due to contraindications this can limit therapeutic options and may also lead to suboptimal patient compliance. Hypoglycaemia may become a limiting factor in the treatment of patients with advanced disease [16]. Moreover, insulin-treated patients with type 2 diabetes are often profoundly insulin-resistant and require high doses, which can exacerbate weight gain.

This was a randomized, prospective, parallel-group, experimental trial conducted at an outpatient facility in 300 Type 2 Diabetes patients who were uncontrolled (HbA1c=7.5–10%) with metformin, sulfonylurea (Glimepiride) and insulin therapy. Patients were randomly divided into two groups one received Teneligliptin 20 mg (n=152) and other received Hydroxychloroquine 400 mg (n=148) while continuing insulin therapy with other two OHA. To be eligible, patients had to have received injectable insulin for at least 3 months along with specified dose of metformin and glimepiride, at a dose of at least 30 U/day for a minimum of 4 weeks prior to enrolment. Male and female were eligible upon fulfilment of the following conditions: aged 18–80 years; HbA1c=7.5–10%; fasting plasma glucose (FPG) < 200 mg/dl, Post Prandial Plasma glucose (PPG) < 350 mg/dl and BMI 22–45 kg/m2. Patients were excluded if they had any severe complications of diabetes. Patients with recent (<1 year) CV events i.e. myocardial infarction/ACS, stroke or has undergone coronary artery bypass surgery, percutaneous transluminal coronary angioplasty or transient ischemic attack or history of congestive heart failure or unstable angina, severe renal and liver dysfunction, severe infections. Patient with known history of diabetic ketoacidosis, Glucose-6-phophodehydrogenase deficiency, existing diabetic retinopathy of any grade including diabetic retinopathy requiring laser therapy, evidence of an imminent need for retinal laser therapy, uncorrected visual acuity <20/100, abnormal visual fields, difficulty to examine optic disc or evidence of retinal pigment epithelial abnormalities and patients with history or risk of macular edema.

Of the 356 subjects screened for this study, 320 subjects were randomized to either the Hydroxychloroquine or teneligliptin group. A total of 36 subjects was screened but not randomized. Of these 36 subjects, 29 were excluded for unmet eligibility criteria (24 for inclusion and 5 for exclusion criteria). The other 7 subjects were excluded for the following reasons: 2 subject’s was recommended to be hospitalized for blood glucose control by the investigator, another 5 was not able to be contacted and was withdrawn from the study due to problems related to patient’s diary. Among 320 randomised subjects 6 patients in Hydroxychloroquine group and 4 patients on teneligliptin group excluded because of protocol violation, 5 patients in hydroxychloroquine group and 3 patients in teneligliptin group has lost in follow up. In both the group one patient each had died due to some other reason.

This study was conducted in accordance with the good clinical practice guidelines and with the Helsinki Declaration principles. Individual ethical committee approval was obtained prior to the trial. Also prior to conduction of the study related procedure/investigation, a voluntary written informed consent was taken from the patient /legally acceptable representative.

The primary efficacy parameter was the change from baseline to Week 24 or endpoint in HbA1c for Week 24. Secondary efficacy parameters included FPG, mean daily insulin dose, mean daily number of insulin injections, fasting lipid parameters (Total cholesterol, LDL-C, HDL-C, Triglyceride) and body weight. HbA1c, FPG, PPG, insulin dose regimen and body weight were recorded at each study visit. Lipid profiles were assessed at weeks −4, 0,4, 12 and 24. All assessments were made by accredited lab. Although insulin dose adjustments were allowed during the study, patients were asked to use the same type of insulin throughout, and if possible to maintain their daily insulin regimen. Investigators were allowed to decrease a patient’s insulin dose according to their clinical judgement in the event of severe or repeated hypoglycaemic episodes. Upward dose adjustments were allowed as clinically indicated, but were recommended to remain within 25% of the baseline insulin dose.

All adverse events were recorded and assessed by the investigator as to severity and possible relationship to study medication. Vital signs were recorded at each study visit; safety laboratory assessments were made at weeks −4, 0, 4, 12 and 24; ECGs were performed at weeks −4, 0, 4, 12 and Patients were asked to use glucose monitoring devices and instructed on their use. It was ensure that all patients under this study uses the same type of device with a view to performing routine self-monitored blood glucose (SMBG) measurements as instructed by the investigator. They were asked to record the measured values at any time hypoglycaemia was suspected and also prior to breakfast at least three times per day. Confirmed hypoglycaemia was defined as symptoms suggestive of low blood glucose confirmed by an SMBG measurement < 70 mg/dl plasma glucose equivalent. Severe hypoglycaemia was defined as any episode requiring the assistance of another party (with plasma glucose value <70 mg/dl, unless the severity of the event precluded glucose determination). 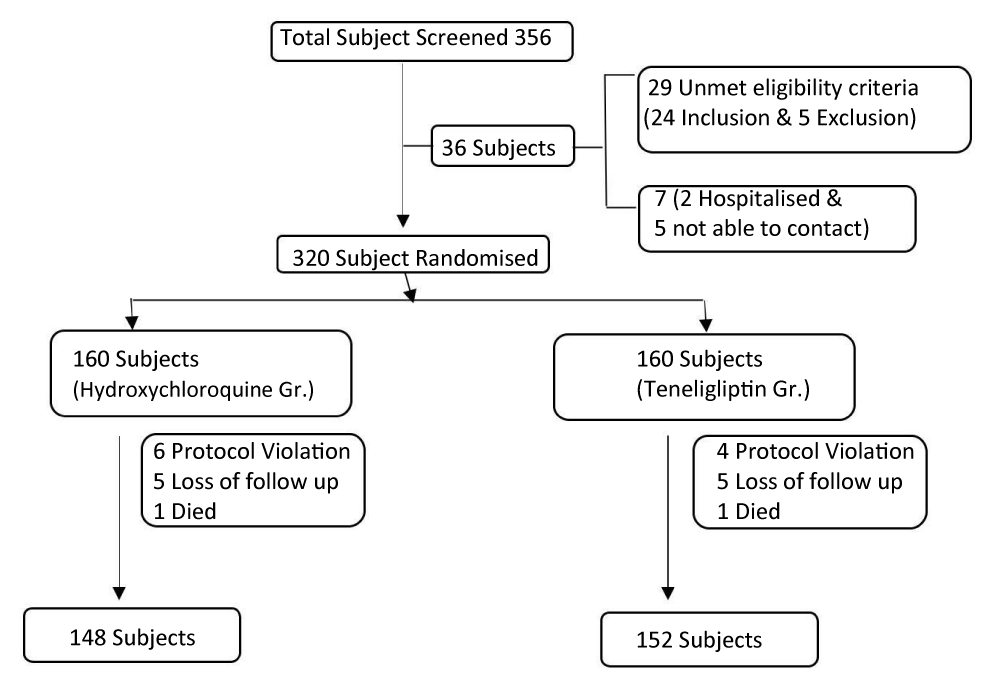 Change of HbA1c, FBG and PPG

There is marginal change of BMI in Hydroxychloroquine group as compare to Teneligliptin group but differences in between the groups are not statistically significant.

Change in Insulin dosage and time of insulin injection

Figure 2 shows the frequency of confirmed (Figure 2a) and severe (Figure 2b) hypoglycaemia during 24 week treatment. Both rates were significantly lower in the Hydroxychloroquine group (1.91 and 0 events per patient-year, respectively) than in the Teneligliptin group (2.98 and 0.10 events per patient-year, respectively; p<0.001 and p=0.032 based on χ2 test of two Poisson rates). Expressed in absolute number of events, 33 patients in the Hydroxychloroquine group reported a total of 113 events, none of which were severe (i.e. requiring assistance of another party). In the Teneligliptin group, 45 patients reported a total of 185 events, six of which were severe.

Type 2 Diabetes Mellitus is a progressive disease characterized by insulin resistance, impaired insulin secretion, increased glycogen dysplasia and obesity, the incidence of which has been rising consistently worldwide. It is widely recognized to be caused by impaired functions of pancreatic b and a cells [16]. According to a British prospective study, the functions of pancreatic b cells has been decreasing at a rate of 4% to 5% each year in diabetic patients, even 10 to 15 years before the diagnosis was made [17,18].

Hypoglycaemia is a major limiting barrier to good glycaemic control with insulin [19]. The main finding of this 24-week randomised, controlled trial was that despite an improvement in glycaemic control in patients with type 2 diabetes that was poorly controlled with high doses of insulin, the addition of Hydroxychloroquine was associated with reduced hypoglycaemia, particularly severe hypoglycaemia.

These findings conclude that the co-administration of Hydroxychloroquine 400 mg with insulin results in a sustained improvement in glycemic control when administered to patients with type 2 diabetes who are poorly controlled on insulin therapy along with other oral antidiabetic agents. In addition, these findings support early studies suggesting that Hydroxychloroquine improves glycemic control by increasing insulin sensitivity in patients with type 2 diabetes. In other words, irrespective of the history, body habitus, insulin dose and insulin secretory capacity, concomitant therapy with Hydroxychloroquine 400 mg is likely to be effective in patients with poor glycemic control. Stratified analysis based on the insulin regimen suggested that add-on therapy with sitagliptin is most effective when combined Teneligliptin with insulin therapy. Based on the encouraging results of this study, further investigation on a larger scale is warranted in the future to confirm it further.

Hydroxychloroquine decreases HbA1c in patients whose type 2 diabetes is poorly controlled with high doses of insulin as compare to Teneligliptin. Addition of hydroxychloroquine to insulin therapy is also associated with reduced incidence of confirmed and severe hypoglycaemia.

The authors declare no financial support or relationships that may pose a conflict of interest. Authors acknowledge the immense help received from the scholars whose articles are cited and included in references of this manuscript. The authors are also grateful to authors /editors / publishers of all those articles, journals and books from where the literature for this article has been reviewed and discussed.