A Pancreatic Neuroendocrine Tumor with an Unusual Flush

Copyright License: © 2018 Sutandi N, et al. This is an open access article distributed under the Creative Commons Attribution License, which permits unrestricted use, distribution, and reproduction in any medium, provided the original work is properly cited.

A 60-year-old man presented with an unusual history of lower limb flushing. A CT scan suggested a pancreatic neuroendocrine tumor. After a robotic distal pancreatectomy, his symptoms completely resolved. The tumor was positive for synaptophysin and chromogranin. This case emphasizes the importance of recognizing atypical features in patients, especially with an unusual skin presentation that might indicate rare tumor types.

The incidence of Pancreatic Neuroendocrine tumors (pNET) has gradually increased over the last three decades [1]. Patients can present with either specific symptoms such as abdominal pain, diarrhea or no symptoms at all, dependent upon on what gut peptides the tumor secretes the tumor secretion [2]. The occurrence of flushes on the face as a part of carcinoid syndrome which arises from a functional NET has been well known. Meanwhile, the presentation of flushes on the legs related to a pNET has not been previously reported.

A 60 year old man, with a previous history of esophageal dysplasia, and a hiatus hernia came to the clinic in February 2016 after being referred following incidental finding of abnormal scan. A CT scan showed 3cm lesion in the pancreas (Figure 1), showing a 25 mm thick walled unilocular cyst in the neck of the pancreas, connected to 7mm cyst and 20mm hypoechoic mass. There was partial occlusion in the adjacent pancreatic duct and slight dilatation in the distal duct (near the tail). A contrast study was performed, showing hyperenhancement of the cyst wall and solid component (to a lesser extent). The overall appearance suggested a pNET, with a differential diagnosis of Pancreatic Ductal Adenocarcinoma (PDAC) or Intraductal Papillary Mucinous Neoplasm (IPMN). The cystic and solid lesions were also biopsied by using 22G FNA needle. The result from cytology and biochemistry examination were conclusive of NET, showing positive staining for synaptophysin and chromogranin, with negative staining for CD56, trypsin, gastrin, glucagon, insulin, and somatostatin. Few cells were positive for CK19. The Ki67 proliferation index was less than 5%. 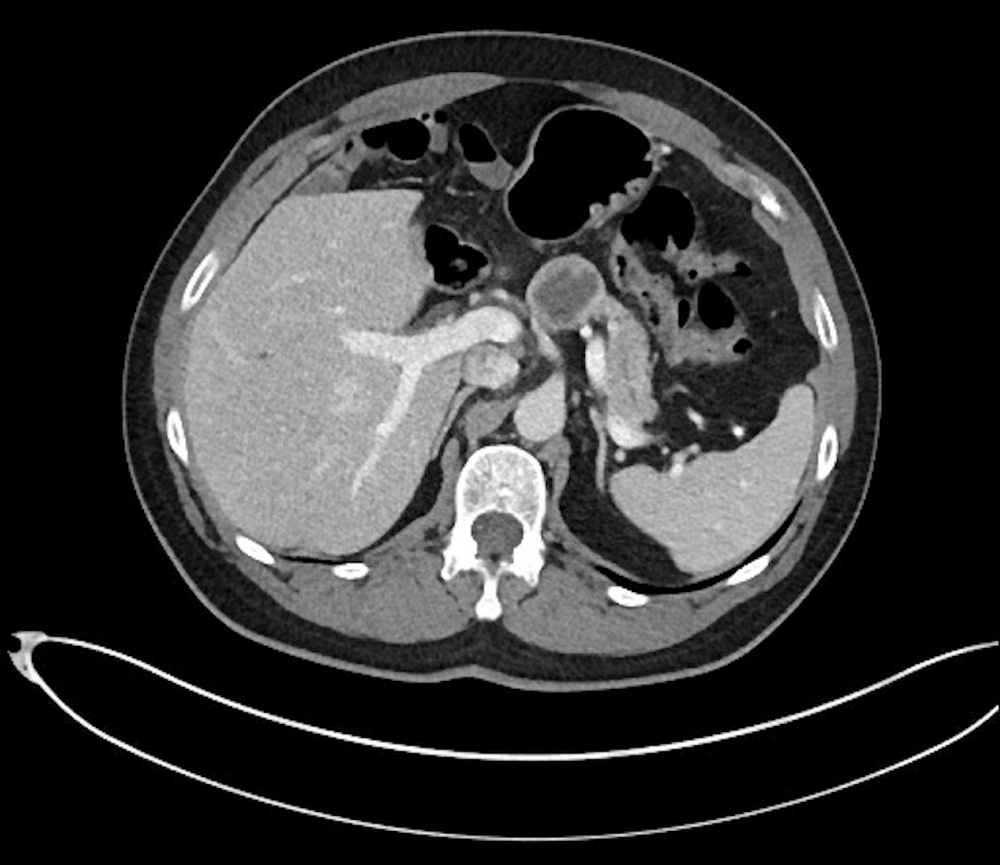 This gentleman did not experience any particular symptoms such as the bronchospasm, diarrhea, and heart problem, except the unusual presentation of rapid and intermittent “dry flushes” on his leg, described as a large, confluent red and warm patch on the skin with a mild burning sensation, which had persisted for a couple of months (Figure 2) which he thought was unrelated to the tumour and was of no significance. The patient did not take any medication that can possibly lead to this symptom. The result of the urinary 5-HIAA and blood Chromoganin a were elevated. This patient underwent a robotic distal pancreatectomy and splenectomy in May 2016 (R0 resection), and pathology confirmed a Grade 1 (Ki67 1.85%), well-differentiated pancreatic neuroendocrine tumor with according to WHO 2010 classification. There were no lymph node and distant organ metastases. Since resection with over 1 year follow-up the patient has had no further episodes of lower limb flushing, and the result from the urinary level of 5-HIAA and blood Chromoganin A progressively went back to normal. 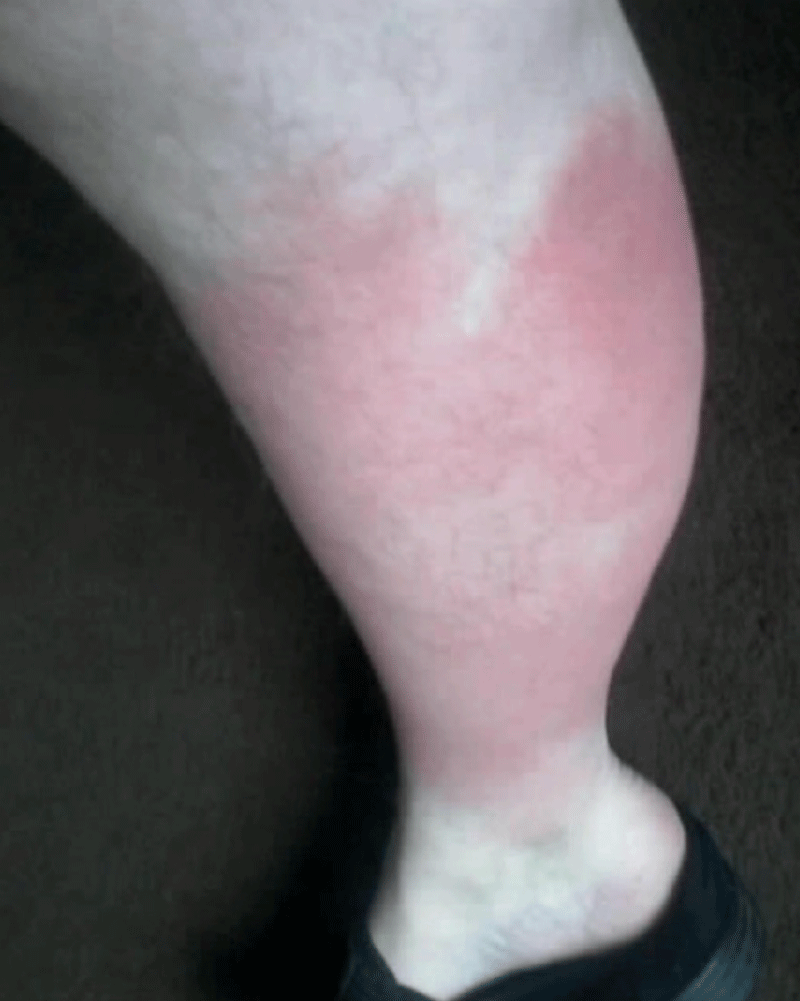 Figure 2: Unusual presentation of hot flushes on the leg.

Pancreatic Neuroendocrine tumors (pNETs) are neoplasms that arise from endocrine cells of the pancreas. They can be broadly divided into 2 subcategories, which are functioning (hormone producing) or non-functioning tumors depending on which gut peptides they secrete. Approximately, 60-90 % of pNETs are non-functioning. In contrast, a functioning pNET can cause unusual symptoms if they secrete insulin, gastrin, vasoactive intestinal peptide (VIP), glucagon, somatostatin, or serotonin [3]. Carcinoids belong to the subgroup of functional neuroendocrine tumors that arise from enterochromaffin cells, producing various amines such as serotonin, peptides, tachykinins, and prostaglandins. It is often associated with carcinoid syndrome, with the most common manifestations being cutaneous flushing, diarrhea, and cardiac valvular lesion [4]. Carcinoid tumors in the pancreas are not commonly found, and are infrequently related to carcinoid syndrome, often presenting with normal level of serotonin in plasma and urine [5]. Cutaneous flushing, which is also known as vasodilator paroxysm occurs in almost 80% of patients with a carcinoid tumor. It commonly localizes in the head, neck, and upper trunk area, and lasts for 30 seconds up to 3 minutes. It can be classified into “wet flushes” which suggests autonomic hyperactivation and the “dry flushes” related to the activation of smooth muscle. The pathological mechanism is not well understood, although evidence suggests the involvement of tachykinins as the predominant mediator. Tachykinins, particularly neuropeptide K are vasodilators, which appear to increase in plasma level during a flush. Serotonin is not thought to have any involvement in the mechanism of cutaneous flushing in carcinoid syndrome [4]. Treatment for pNET’s vary range from surgery, medical therapy, systemic chemotherapy, or even surveillance. Surgical resection is an option for a local lesion of 3 cm or more. Another treatment involves the use of somatostatin analogs such as ocreotide as the standard therapy in functioning NETs, and interferon alpha in the second line. In metastatic NET, debulking surgery or systemic chemotherapy can be a choice [6,7]. The patient in this case experienced a unique cutaneous manifestation of lower limb flushing as a result of functioning pNET tumor which is previously unreported. Moreover, it also highlights the importance of associating unusual skin manifestations to rare tumors.

The appearance of hot flushes in the lower limb is unreported, but possibly found related to NET. This case strongly suggests the importance of not overlooking atypical presentation in patients, especially in the case of malignancy.

This work was carried out in collaboration between the authors. Authors NS and SAW gathered the initial data and managed literature searches. Authors produced the initial draft and wrote the manuscript. All authors read and approved the final manuscript.