Copyright License: © 2018 Jaman MS, et al. This is an open access article distributed under the Creative Commons Attribution License, which permits unrestricted use, distribution, and reproduction in any medium, provided the original work is properly cited.

Type 2 diabetes is a common disease in these days and day by day it is arising. The main focus of the study was to investigate association of packed cell volume (PCV), Mean Corpuscular Volume (MPV), Mean Corpuscular Hemoglobin Concentration (MCHC), Red Cell Distribution Width (RDW) with glycemic marker HbA1c. So that PCV, MPV, MCHC, RDW could be used as a predictor of glucoregulation in type 2 diabetes instead of HbA1c value. This study included 87 DMT2 patients, which divided into two groups, A (n=41, presence in diabetics≤6.5-6.9%) and B (n=46, target in diabetes≥7.0%), according to HbA1c values. Spearsman correlation co-efficients were calculated to evaluate the relationship between RBC count, MCHC, RDW with random blood sugar (RBS) and PCV, MCV, MCHC with HbA1c value. Binominal logistic regression analysis was performed to estimate the relationship between glycemic control, as dichotomous outcome of MCHC, RDW, PCV, and MCV as the main prognosticator. MCHC and RDW were significantly higher in the group B compared to the group A. RDW and MCHC may be applied as the auxiliary indicators of deterioration of glucoregulation.

Type 2 diabetes is a metabolic disorder caused either by the insufficient production of insulin in islet cells of the pancreas or by resistance against secreted insulin in tissue, leading to an elevation in the glucose concentration in blood. Several research have been published that plasma cholesterol level, blood pressure, micro albumin urea and hyperglycemia are closely associated with the progression of diabetes mellitus [1,2]. Supernumerary, serum uric acid level, carboxyl terminal pro peptide and retinal venular diameter also used significant indicators of diabetic complications [3,4]. Red cell distribution width (RDW) is a quantative measure of variability in the size of circulating erythrocytes in cell sizes. Most interesting fact is that, RDW is a routinely reported to physicians in clinical practice as part of the automated complete blood count (CBC), It is mainly used as an auxiliary index in the differential diagnosis of macro cytic anemia. Iron deficiency anemia is associated with a high RDW. In addition to, thalassemia syndrome produce red blood cells (RBCs) of more homogenous size. Researchers have been demonstrated that higher or even normal reference range of RDW was even normal reference range of RDW was strongly associated with increased risk of cardiovascular disease (CVD) events in middle aged and older adults [5-11]. Recent studies have been demonstrated that RDW may also be an effective prognicator of morbidity and mortality in various disease such as PH [12,13], NAFLD[14], CHD[7,15-18], Stoke [19], atherosclerosis[20], prevalent dementia [21], IBD [22], ESRD [23] and heart failure [24]. On the other hand, HbA1c is a marker of long term glucose homeostasis and is routinely used to assess the adequacy of glycemic control in diabetic patients. Many researches have been noted that HbA1c is associated with type 2 diabetes patients. As well as, HbA1c is a marker of long term glucose homeostasis and is routinely used to assess the adequacy of glycemic control in diabetic patients. [25-27]. HbA1c level increase with age, chronic subclinical inflammation and possibly oxidative stress and also in conditions that can adversely affect red blood cell survival. For example, hemolytic anemia, blood transfusion (BT0, chronic malaria or major blood loss) [25,28,29]. Platelets, another element of the complete blood count (CBC), play a key role in the development of atherothrombosis, a major role in intravascular thrombosis on top of atherosclerosis, resulting in cardiovascular diseases in diabetes with respect to altered platelet morphology and function [30,31]. Mean platelet volume (MPV) is and indiactor of the average size and was suggested as an indicator of platelet activity and the state of thrombogenesis [32,33]. Some studies antiplaletes have been demonstrated as to be very effective at decreasing myocardial infarction, stroke and death [34]. In addition to, leukocytes are cognizant as to participate in the inflammatory process. Accompanying atherosclerosis. They are come round at the site of endothelial injury and form foam cells in the atherosmatosis plaque. WBC count is positively associated with increased cardiovascular mortality, mainly from coronary heart disease [35]. Previously our researches have been shown the association of mean platelet volume and platelet parameter with HbA1c [36]. In this study, we aimed to evaluate the relationship between RBC parameter such as RBC count, PCV, MCV, MCHC, RDW-CV and HbA1c value≥7.5 of diabetics’ patients. So that RBC parameter could be used as prognicator of diabetes instead of HbA1c test.

Blood cell count and HbA1c and other related parameters were measured. Blood samples were collected in tubes with EDTA anticoagulant. The tubes without anticoagulant were used for collecting blood for glucose and lipid profile measurement. Complete blood cell count was measured by sysmex XN-L series 350(6 part). HbA1c value was measured by fine care ID chips. Lipid profile, glucose, and other biochemistry profile were measured by ERBA Mannheim XL 200. Fasting blood glucose was measured using a hexokinase method. Standardization, calibration of instrument and processing of samples were done according to manufacturer instructions. All Data reserve into MYSOFT LTD in Lab science Diagnostics. The study approval was taken from the ethics committee of Lab Science Diagnostics.

According to the result of sample population are detailed in table 1. A total of 87 patients fulfilling the selection criteria included 37 (out of 87, 42.52%) females and 50 (out of 87, 57.47%) males. The average age of both patients was 25 to 80. The total number of study participants who were divided into two groups according to their diabetics status, 46 (out of 87, 52.87%) DMT2 patients were in the group B (target in diabetics, HbA1c value≥7.00), 41 (out of 87, 41.13%) in the group A (presence in diabetics, HbA1c value≥7.00). Statistically significant differences were observed between those groups for various parameters. In this study, significant differences among the groups for all examined demographic and biochemical characteristics. Median value of age, FBS, RBS, HbA1c, platelet count, Cholesterol, LDL, Creatinine, SGPT, SGOT, Alkaline phosphatase, RBC count, MCHC, RDW CV were significantly higher in the group B compared to the group A. On the other hand, HDL, Triglycerides, PCV, MCV, MCH value in the group B compared to group A was found (Table 1). 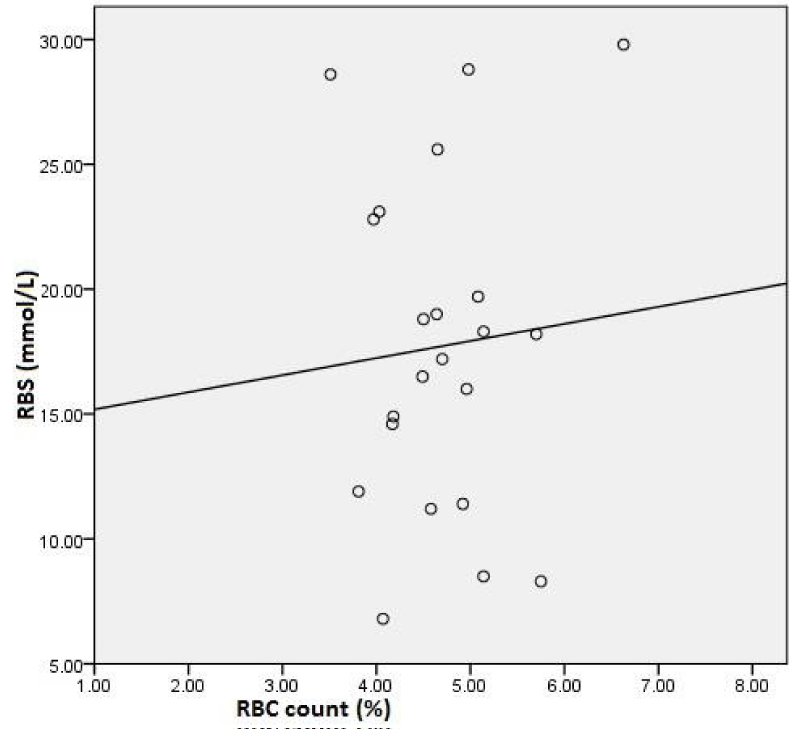 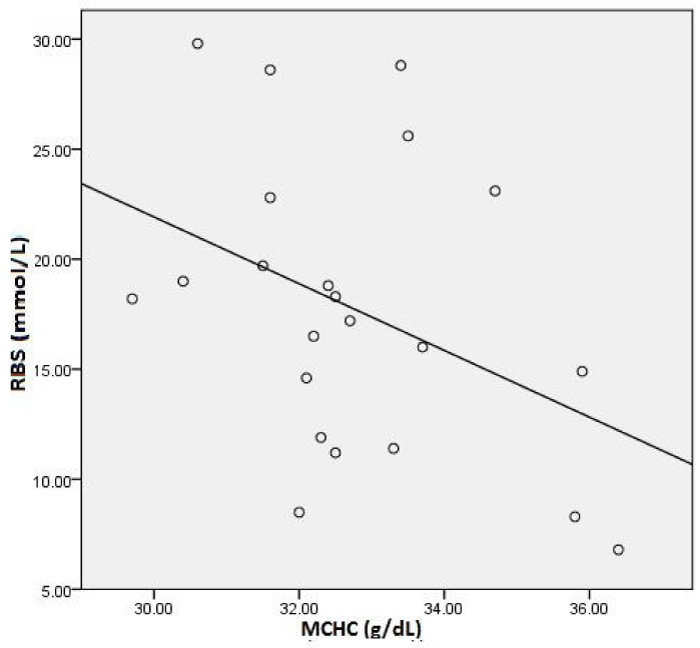 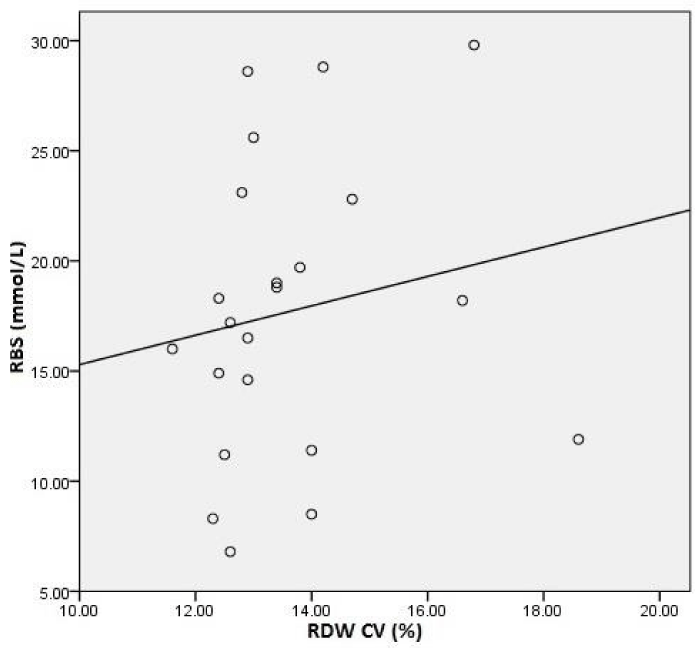 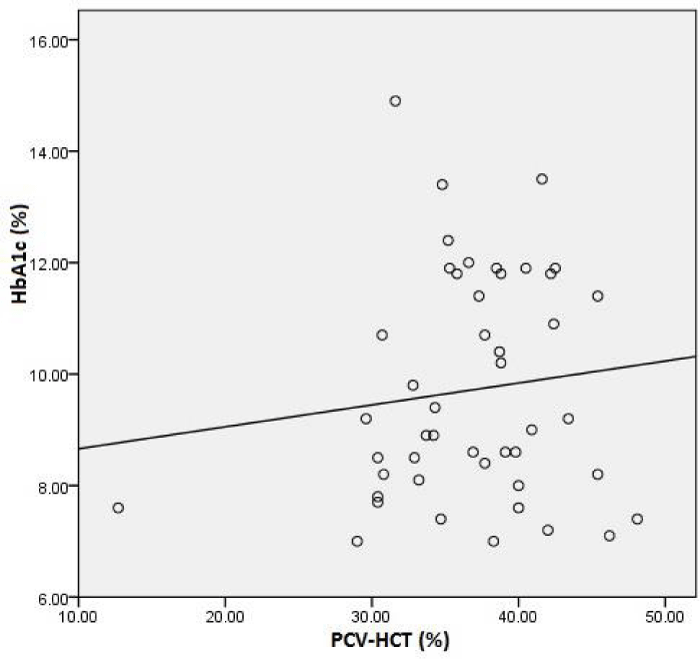 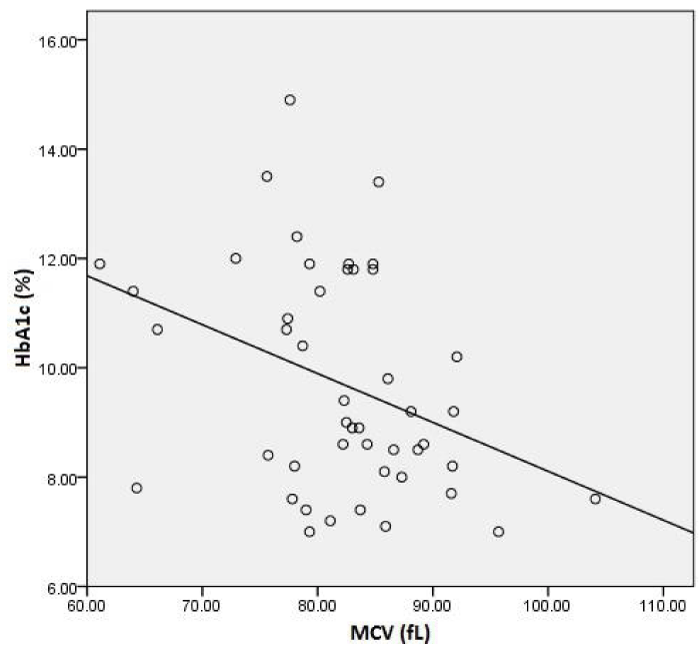 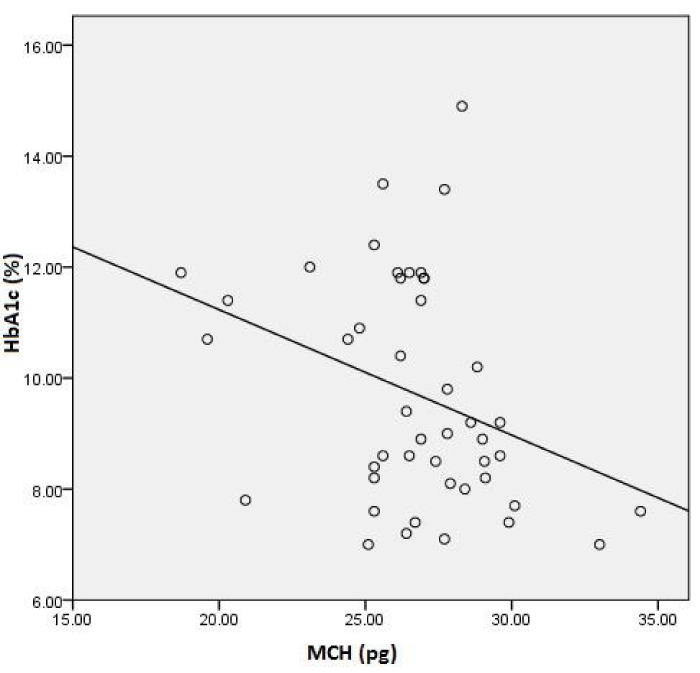 This model showed that the significant value of MCHC and RDW were positively associated with the risk of inadequate glycemic control.

Our study is the first to demonstrate a significantly positive association between MCH. MCHC, RDW with HbA1c independent of RBS levels in an adult general population with no history of diabetes and free of cardio vascular disease. HbA1c levels have also been shown to be associated with inflammation even in populations with no diabetes [10]. The RDW, a widely available and inexpensive test conducted as part of the complete blood cell count, measures the degree of anisocytosis. It is calculated as follows,

The normal range for the RDW-CV is 11.5% to 14.5% and higher values indicate greater in cell sizes. High RDW indicates a high degree of anisocytosis which is associated with distortion and degredation of erythropoiesis [37]. Reflecting chronic inflammation and an increased level of oxidative stress. Increased RDW also arise as a result of anemia. Otherwise, causes like iron deficiency and megaloblastic anemia with associated micro or macro cytosis are potential cofounders because our patients were not screen for iron, vitamin 12, folic acid. Nevertheless, the effect of such confounders is negligible as all the participants selected for the study were healthy individuals and diabetes without complication or obvious co morbidities as at the time of the study. The effect of other causes of chronic inflammation for example tuberculosis, cancers and connective tissue disorders as confounders is similarly negligible. The life span of red blood cell could be decreased in diabetes patients. So, RBC’s are affected by various disturbances in the hematopoietic milieu. These disturbances lead as to elevated internal viscosity and increased membrane rigidity in these blood cells. So, RBC count is calculated as increase.

The result in this study showed significantly increased in MCH & MCHC, some research have been suggested that anemia occurrence in diabetic mellitus is due to increased no enzymatic glycosylation of RBC membrane proteins, which correlated with hyperglycemic. Oxidation of these glycosylated membrane proteins and hyperglycemic in diabetes mellitus cause an increase in the production of lipid peroxides causing a hemolysis of RBCs or diabetes mellitus may cause anemia as secondary disorder

RBC count, PCV, MCV as an RBC index are down rising and MCHC, RDW are uprising as a new marker associated with higher mortality in health and disease. In diabetic patients, the glycemic control does affect the MCHC and RDW. Good glycemic control is associated with lower RDW and MHC value than in patients with poor control. Both MCHC & RDW are directly and significantly associated. This positive correlation may strengthen the notion that RDW is an inflammatory marker. The study in our population can be considered as an initial one that necessitates further studies to define the relation between RBC count, PCV, MCV, MCHC and RDW with different diabetic complications and its predictive value. Further studies are also required to define specific values of the RDW to indicate specific risks in diabetic patients.

The authors would like to thanks Lab Science diagnostic for sharing patients report.