Copyright License: © 2019 Michiels JJ, et al. This is an open access article distributed under the Creative Commons Attribution License, which permits unrestricted use, distribution, and reproduction in any medium, provided the original work is properly cited.

Primary myelofibrosis (PMF) is a distinct clinicopathological myeloproliferatve disease (MPD) not preceded by any other MPD ET, PV, CML,... Combined use of bone marrow histology and increased erythrocyte counts above 5.8x1012/L can replace increased red cell mass at time of presentation as the pathognomonic clue for the correct diagnosis of hetero/homozygous or homozygous mutated PV. Erythrocyte counts are in the normal range below 5.8x1012/L in heterozygous JAK2V617F mutated ET and prodromal PV but above 5.8x1012/L in heterozygous-homozygous or homozygous mutated PV. The bone marrow cellularity and morphology in pre-fibrotic ET, prodromal PV and PV carrying the JAK2V617F mutation are overlapping showing clustered increase of large mature pleomorphic megakaryocytes (M) with no increase of cellularity (<60%) in ET. The bone marrow is hypercellular (60%-80%) due to increased erythropoiesis megakaryopoiesis (EM) in prodromal and classical PV and trilinear hypercellular (80%-100% due increased megakaryopoiesis, erythropoiesis and granulopoiesis (EMG) in advanced PV and masked PV. Bone marrow cellularity ranging from normal (<60%) in ET to increased erythropoiesis (EM) in prodromal PV to hypercellular (80-100%) in advanced PV and masked PV largely depends on increasing JAK2V617F mutation load from low to high on top of other biological MPN variables like constitutional symptoms during long-term follow-up. MPL515 mutated ET is featured by an increase of clustered small and giant megakaryocytes with hyper-lobulated staghorn-like nuclei in a normal cellular bone marrow. The third entity of pronounced JAK2/MPL wild type ET associated with primary megakaryocytic granulocytic myeloproliferation (PMGM) without PV features proved to be caused by calreticulin (CALR) mutation. CALR mutated thrombocythemia is characterized by dual proliferation of megakaryocytic and granulocytic bone marrow proliferation of dense clustered large to giant immature dysmorphic megakaryocytes with bulky (bulbous) hyperchromatic nuclei, which are not seen in MPL515-mutated Thrombocythemia and JAK2V617F-Thrombocythemia, prodromal PV and classical PV.

Primary myelofibrosis (PMF) according to the criteria of the Polycythemia Vera Study Group (1975 PVSG) is a clinicopathological entity not preceded by any other MPD PV, CML, or MDS, and characterized by various degrees of anemia, splenomegaly, leuko-erythroblastosis, with tear drop-shaped erythrocytes, and dry tap on BM aspiration due to various degrees of myelofibrosis (MF) or osteosclerosis [1]. In 1977 Silverstein reviewed the characteristic findings in PMF [1,2]. All PMF patients, are usually above the age of 50 years, have large spleens, a leuko-erythroblastic blood reaction, striking teardrop poikilocytosis and dry tap on bone marrow aspiration. Under low-power magnification, a typical marrow section shows stranding, considerable fibrosis, and a few scattered megakaryocytes: at higher power, a dense fibrotic reaction is usually apparent. The marrow tends to be hypocellular in about 85%, normocellular in about 5% and hypercellular in about 10% of PMF patients. Anemia of ineffective erythropoiesis develops in about 60% of PMF patients within 5 to 10 years. Thrombocytopenia and leucopenia related to hypersplenism is seen in 30% and 14% of PMF patients. The diagnostic PVSG criteria for PMF have not been changed in the 2001, 2008 and 2016 WHO criteria for PMF [3-10].

Case 1 in table 1 and related figure shows a typical case of primary pre-fibrotic PMF (prePMF) followed by progressive myelofibrosis, splenomegaly during 20 years follow-up. Sequential bone marrow aspirates and biopsies in 1971 and 1978 showed normal cellularity, no increase of erythropoiesis, selective increase of large megakaryocytes in a bone marrow smears and fine reticulin fibers in a bone marrow biopsy. In 1978, early stage PMF with reticulin fibrosis grade 2 was associated with significant splenomegaly but normal platelet counts and no anemia. Since 1985 full blown primary myelofibrosis (PMF) with progressive anemia and splenomegaly and leuko-erythroblastosis developed and the patient died in 1989 (Table 1). PMF was complicated by a transient episode of erythromelalgic thrombocythemia at platelet counts above 400x109/L at time of progressive PMF during the sequential fibrotic stages of increased reticulin fibrosis followed by collagen fibrosis. Pre-PMF with reticulin fibers grade 1 was diagnosed in 1971 in a 61-year-old man. The spleen had progressed to 7 cm in 1978 and to 13 cm below the costal margin in 1988. Since 1985 he suffered from aspirin responsive burning pain and red swelling of the right hand, fingers and left foot toes (erythromelalgia) at platelet counts of 400 to 500x109/L. After correction of increased platelet counts (800x109/L) by hydroxyurea to 200x109/L, erythromelalgia did not recur because anemia, splenomegaly and thrombocytopenia developed (Table 1).

Table 1: Blood and bone marrow biopsy features in a case of pre-fibrotic and fibrotic stages of PMF during life-long follow-up and bone marrow smear at time of diagnosis in 1971. Source Michiels & Ten Kate Ann Hematol. 1992; 39: 131-136.

The PMF case in table 1 could be diagnosed as primary megakaryocytic granulocytic myeloproliferation (PMGM) when the Hannover Bone Marrow classification of the MPDs are applied [2]. Sequential bone marrow biopsies in 1985 and 1989 showed normal cellularity, coarse reticulin fibers, collagen fibrosis (with dry tap on aspiration), and increase of clustered large megakaryocytes. PMGM is misclassified as chronic idiopathic myelofibrosis (CIMF) by Thiele et al. in 1996, as CIMF in the 2001 WHO classification by Thiele & Vardiman and as PMF by Tefferi in the 2008 and 2016 WHO classifications. According to the 2006-2008 ECMP classification Michiels & De Raeve re-defined CIMF and PMF as JAK2 wild type PMGM (Table 2). PMGM has been recognized by Michiels in 2006 as JAK2/MPL wild type Thrombocythemia associated with PMGM since 2006 and as CALR mutated hypercellular thrombocythemia associated with PMGM since 2014 [11-18]. 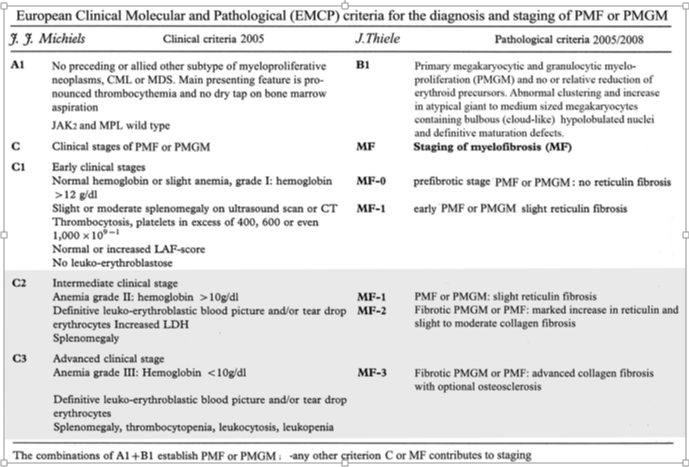 Table 2: European Clinical Molecular and Pathological (EMCP) criteria for the diagnosis and staging of PMF or PMGM.

MPL is the thrombopoeitin receptor (TPOR) on hematopoietic bone marrow cells discovered by William Vainchenker, who also discovered the JAK2V617F as the cause of trilinear myeloproliferative disorders: polycythemia vera (PV) and essential thrombocythemia (ET). About 40% of ET patients are JAK2 wild type. There is a small subgroup of 3% to 8.5% within JAK2 wild type ET patients, who carry an acquired gain of function MPL515 mutation as the cause of monolinear ET [8-10]. Tefferi from the division of Hematology, Mayo Clinic, Rochester, MN reviewed in January 2012, 1000 consecutive patients with primary myelofibrosis (PMF) seen at Mayo Clinic between November 4, 1977, and September 1, 2011 [3]. The International Prognostic Scoring System (IPSS), dynamic IPSS (DIPSS), and DIPSS-plus were applied for risk stratification. Separate analyses were performed for PMF patients seen at time of referral (N=1000), at initial diagnosis (N=340), and within or after 1 year of diagnosis (N=660). Anno 2012 there were 592 documented deaths and 68 leukemic transformations. Parameters at initial diagnosis vs time of referral included median age (66 vs 65 years), male sex (61% vs 62%), red cell transfusion need (24% vs 38%), hemoglobin level less than 10 g/dL (38% vs 54%), platelet count less than 100 × 109/L (18% vs 26%), leukocyte count more than 25 × 109/L (13% vs 16%), marked splenomegaly (21% vs 31%), constitutional symptoms (29% vs 34%), and abnormal karyotype (31% vs 41%). Mutational frequencies were 61% for JAK2V617F, 8% for MPL515, and 4% for IDH1/2. DIPSS-plus risk distributions at time of referral were low in 10%, intermediate-1 in 15%, intermediate-2 in 37%, and high in 37%. At that time CALR mutation as the driver cause of ET and PMF was not yet discovered. The corresponding median survivals were 17.5, 7.8, 3.6, and 1.8 years vs 20.0, 14.3, 5.3, and 1.7 years for patients younger than 60 years of age. Compared with both DIPSS and IPSS, DIPSS-plus showed better discrimination among high risk groups. Five-year leukemic transformation rates were 6% and 21% in low- and high-risk patients, respectively. Anno 2012 Dr. Tefferi concluded that prognosis in PMF should be assessed after a period of observation after diagnosis rather than at diagnosis. In addition, it seems that about 50% are treated in this manner whereas about 25% are candidates for allogenic stem cell transplant. Roughly 20% can be treated with a JAK2 inhibitor Jakafi/Ruxolitinib.

By including bone marrow histology for ET, PV and PMF since 1980 Michiels & De Raeve changed the concept of PVSG-WHO defined Myeloproliferative Disorders (MPD) into the improved ECMP and WHO-CMP classifications of Myeloproliferative Neoplasms (MPN) [8-10]. The broad spectrum of JAK2V617F mutated trilinear MPN varied from ET, prodromal PV, masked PV, erythrocythemic PV, classical PV, and PV complicated by splenomegaly and myelofibrosis (MF). ET heterozygous for the JAK2V617F mutation is associated with low MPN disease burden and normal life expectancy. JAK2V617F mutation load increases from less than 50% in early stage PV to 100% in combined heterozygous/homozygous or homozygous JAK2V617F mutated advanced PV and post-PV MF. Pre-treatment bone marrow morphology and cellularity distinguish JAK2V617F mutated trilinear MPN from CALR and MPL mutated MPN. The morphology of clustered large pleomorphic megakaryocytes with hyper-lobulated nuclei are similar in JAK2V67F ET and PV patients (Figure 1). CALR mutated thrombocythemia shows bone marrow characteristics of PMGM (Table 2). CALR mutated thrombocythemia lacks features of PV and present with hypercellular thrombocythemia featured by dense clusters of immature large to giant megakaryocytes with hyperchromatic bulbous (cloudy) nuclei, which are characteristic for PMGM and not seen in JAK2V617F and MPL515 mutated MPN [8,9]. MPL515 mutated thrombocythemia typically shows mono-linear proliferation of large to giant megakaryocytes with hyper-lobulated staghorn like nuclei in a normocellular bone marrow without features of PV or PMGM. JAK2V617F mutation load in heterozygous mutated JAK2V617F normocellular ET ranges from low to 25%, in prodromal PV from 25% to 50% and increases to above 50% up to 100% in hypercellular heterozygous/homozygous or homozygous JAK2V617F mutated PV and advanced PV with myelofibrosis. The CALR and MPL515 mutation load is low in pre-fibrotic stages and rises from values below 25% to maximal values of around 50% in fibrotic stages of MPN [8,9]. JAK2V617F, CALR and MPL515 allele burden slowly increases together with the degree of splenomegaly, myelofibrosis and constitutional symptoms during life-long follow-up. 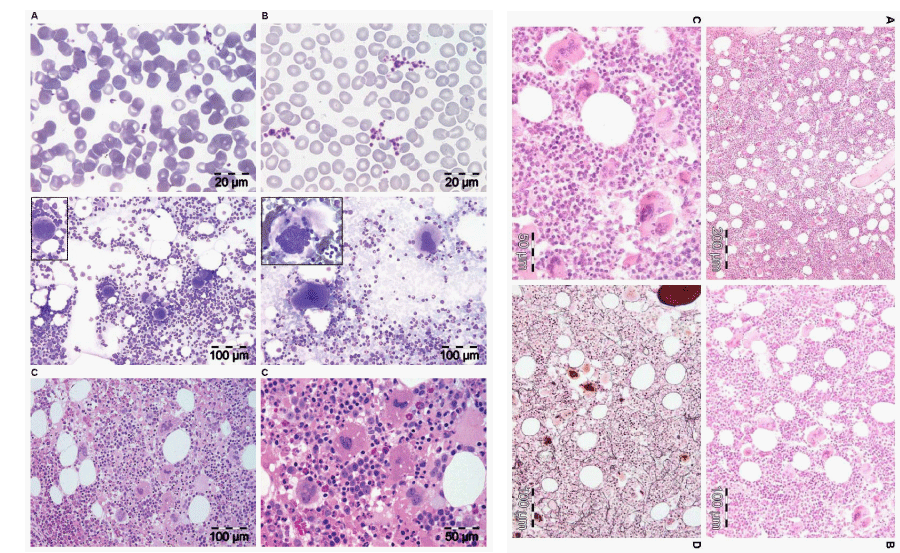 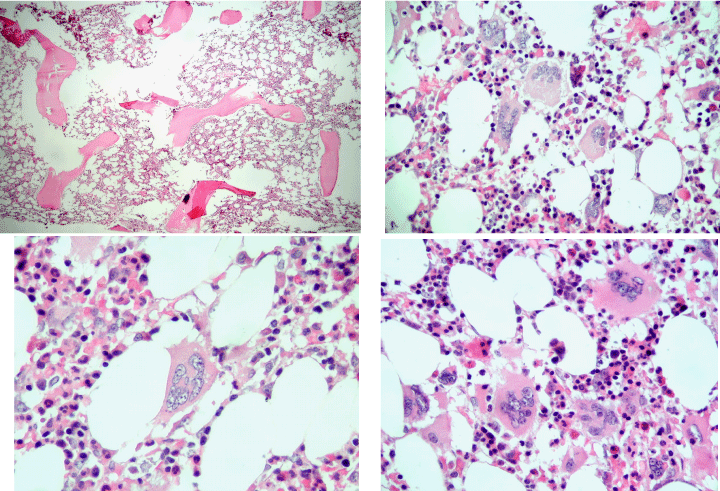 Figure 2: Bone marrow biopsy showing a normocellular bone marrow with no increase of erythropoiesis and increase of large to giant megakaryocytes with hyper-lobulated staghorn like nuclei in MPL515 mutated ET at platelet counts of 1385x109/L and no features of PV (normal serum EPO, LAP score and erythrocytes).

Michiels & De Raeve studied between 2014 and 2018 twelve consecutive newly diagnosed CALR positive ET cases. We found a spectrum of two main stages of normocellular (40%-60%) ET and hypercellular bone marrow (60-80%) ET characteristics as the presenting feature of pre-fibrotic ET and hypercellular ET associated with a PMGM bone marrow picture (Table 2). Bone marrow histology in pre-fibrotic CALR normocellular ET (Figure 3) and in early fibrotic CALR myelofibrosis (MF, Figure 4) showed ‘dysmorphic’ large to giant megakaryocytes with definite abnormalities of maturation with bulky (bulbous) hyperchromatic nuclei and some disturbances of the nuclear cytoplasmic ratio consistent with CALR mutated PMGM, which are not seen in MPL515 mutated ET and also not in JAK2V617F mutated ET, prodromal PV and classical PV. Pich performed in 2018 a comparative analysis of bone marrow cellularity, reticulin fibrosis, and the number, clustering and morphology, size of megakaryocytes and nuclei in 90 cases of WHO defined ET caused by the driver mutation JAK2V617F, CALR or MPL515 at time of diagnosis [14]. The JAK2V617F mutation was found in 58.9%, CALR in 28.9%, and MPL in 4.4% of the cases, and 7.8% were triple-negative. JAK2V617F mutated ET showed inceased bone marrow cellularity due to significant increase of erythropoiesis (Figure 3). MPL515 mutated ET showed the highest number of clustered large mature megakaryocytes with hyperlobulated staghorn-like nuclei in a normocellular or reduced cellular bone marrow (Figure 2). The bone marrow in CALR-mutated ET is normocellular or hypercellular due to dual megakaryocytic granulocytic myeloproliferation with no increase or reduced erythropoiesis CALR mutated ET in the Pich study showed dense clusters of large to giant dysmorphic megakaryocytes with hypo/hyperlobulated hyperchromatic bulbous or cloud-like nuclei similar as observed by Michiels & De Raeve (Figures 4-6) [10,11,15-18]. 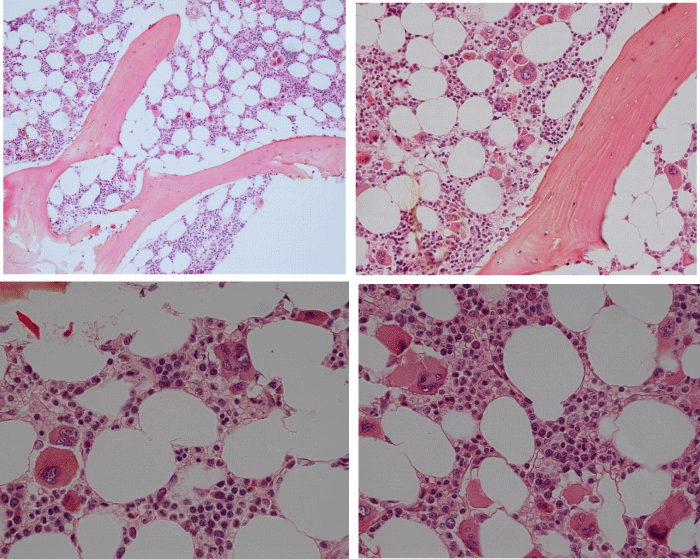 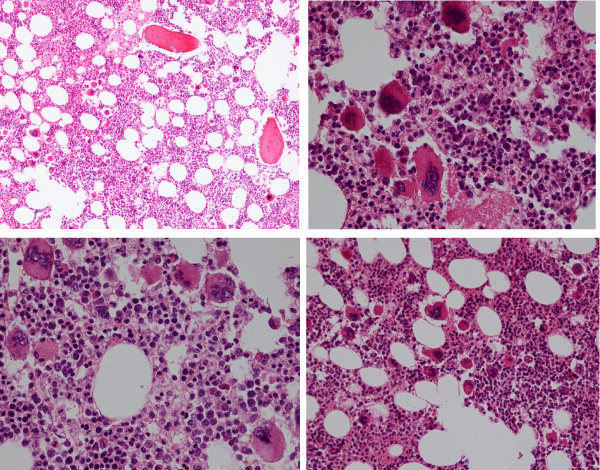 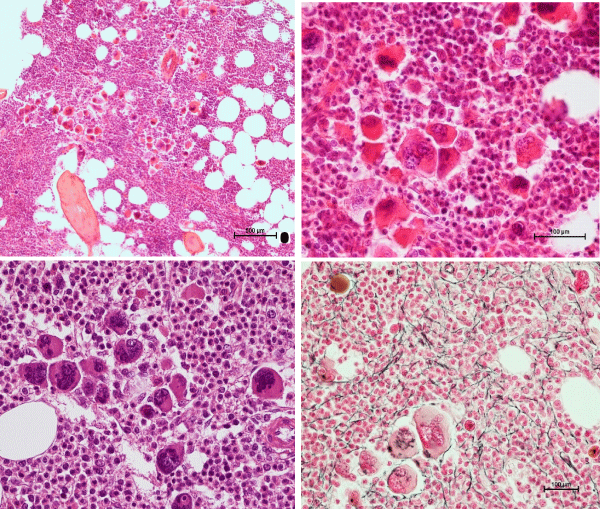