Archives of Asthma, Allergy and Immunology

Copyright License: © 2017 Javan MR, et al. This is an open access article distributed under the Creative Commons Attribution License, which permits unrestricted use, distribution, and reproduction in any medium, provided the original work is properly cited.

Methods: Sesame oil was administrated intraperitoneally three days before immunization. IFN-γ, IL-10, IL-17 and TGF-β levels and mRNA expression in supernatant of and within cultured mononuclear cells were assessed.

Conclusions: Even thoughTH1 and TH17 cells through secretion of IFN-γ and IL-17, respectively, are involved in the pathogenesis of multiple sclerosis and EAE, but IL-10 has been shown to exhibit suppressive effects on these disorders. It can be concluded that sesame oil is able to induce TH2 and TH17-related immune responses and suppress TH1 type in EAE

Experimental autoimmune encephalomyelitis (EAE) is an induced disorder that damages the central nervous system (CNS) and is considered as a model for human multiple sclerosis (MS) [1]. In this disorders, the nervous system is affected and cell mediated immune responses (CD4+ T cell) have a crucial role in the pathogenesis of the disease leading to inflammation and/or demyelination of the CNS [2]. CD4+ T cells, which are responsible in cell mediated immune responses, are divided into two major subgroups; T helper 1 and T helper 2 (TH1 & TH2). TH1 cells augment the cell immunity by producing gamma interferon (IFN-γ) as well as interleukin 12 (IL-12). However, TH2 cells produce IL-4, IL-5 and IL-10 and consequently increase the activity of humoral immunity. These two subgroups, in normal physiological status, show regulatory effects on each other [3]. Transforming growth factor β (TGF-β) is an immunoregulator mediator produced mainly through TH3 or Treg (regulatory T) cells [4] whose inhibitory effects on immune responses have been demonstrated [5]. Faria AMC et al., indicated that increased TGF-β levels is related with EAE suppression [6]. TGF-β levels are also increased in MS patients as a negative feedback of immune system to ameliorate disease severity and complications [7]. Interleukin 17 (IL-17) is a proinflammatory cytokine which is outstandingly produced by TH17 cells. Moreover, through IL-17 production and secretion, activated T cells and a variety of cell types has also been reported to be contributing factor in some autoimmune diseases including EAE [8]. The oil of the Sesamum indicum (sesame) seeds has long been considered a very demanding health food in Iran and other Asian countries. Reports show that sesame oil can act as an antioxidant agent, reduce lipid peroxidation, exhibit healing effects on damaged tissue and provide anti-inflammatory function [9]. Other studies, however, disclose that sesame oil could cause allergic reactions [10]. Given the fact that TH2 cells participate in allergic reactions by producing IL-4, it could be hypothesized that sesame oil can augment the TH2 responses and consequently suppress the TH1 responses. Accordingly we established our study based upon this hypothesis and investigated the effects of sesame oil over TH1 (IFN-γ) and TH2 (IL-10) TH17 (IL-17) and Treg (TGF-β) in EAE mice. In another experiment parallel to this study, we also evaluated the effects of Olive oil as an anti-inflammatory agent to gain unique and specific results.

Forty female C57BL/6 mice (with 1.5-2 months old and 22±1g weight) were purchased from Pasteur Institute of Iran (Tehran, Iran). The room was on a 12-12 hour’s light-dark cycle, and the temperature was maintained between 21 and 23˚C. All steps of research protocol were approved by ethics committee of Tehran University of Medical Sciences and University of Tabriz.

About 200μg of MOG 35-55 (seq: M-E-V-G-W-Y-R-S-P-F-S-R-V-V-H-L-Y-R) with purity >95% was emulsified in complete Freund’s adjuvant containing 1mg/ml of heat-killed Mycobacterium tuberculosis H37RA (Sigma-Aldrich, USA) and was administrated intraperitoneally on day 0. Additionally, mice received 200 ng of pertussis toxin intraperitoneally in 0.5ml of PBS on days 0 and 2. For the control group, all of the procedures above except than MOG administration, were carried out.

Following cervical dislocation, the spleen was removed and placed in 60×15-mm petri dish containing 4 ml complete RPMI-5 and 5% FBS and then pieced into completely small fragments. About 3ml of cell suspension carefully transferred to same amount of Ficoll gradient and centrifuged for 15 minutes (600g and 4˚C). Afterwards, mononuclear cells were collected by Pasteur pipette and washed twice by phosphate buffered saline and then centrifuged. The precipitated cells were mixed in complete medium containing 10% FCS, as suspension of 2×106 cells/ml. Cells were cultured in the presence and absence of MOG 35-55 (50 µg/ml) in 48-well cell culture plates for 96 hours in an incubator containing 5% CO2.

Measurement of IFN-γ, IL-10, IL-17 and TGF-β levels in the supernatant

After 96 hours, the supernatant of cultured mononuclear cells in presence and absence of antigen were collected in order to assess the cytokine levels (Qiagen, Germany). Different dilutions of standard solutions were prepared in dilution buffer and separately added to each 100 µl well. Supernatants were also added to the wells, then specific anti IFN-γ, IL-10, IL-17 and TGF-β conjugates with 1/1000 dilution were added to the plate following 2 hours incubation at 37˚C, and finally washing process was carried out. After 2 hours incubation at 37˚C and then washing, the enzyme substrate in 100µl volume was added to each well. After adding the stop solution, the Optical Density (OD) was deliberated by the light absorption in 450nm through ELISA Reader. Finally, cytokine levels were determined after drawing the ELISA standard curve based upon the ODs.

Our results showed that weight loss in EAE mice which received sesame oil was significantly low (P= 0.01) in comparison to control group (Figure 1A). First symptoms of EAE in treated mice, occurred 9 days after disease induction. But these symptoms in untreated mice initiated 6 days after induction (Figure 1B). The maximum severity of symptoms (The day in which the average severity of symptoms in a group is greater than the other group) in treated group in comparison to untreated group was retarded; day 23 and 15 respectively. Also the average of symptoms among the members of treated group was less than untreated group at the maximum sever day; 6.5±0.5 and 5.2±0.7, respectively (Figure 1; P=0.001). 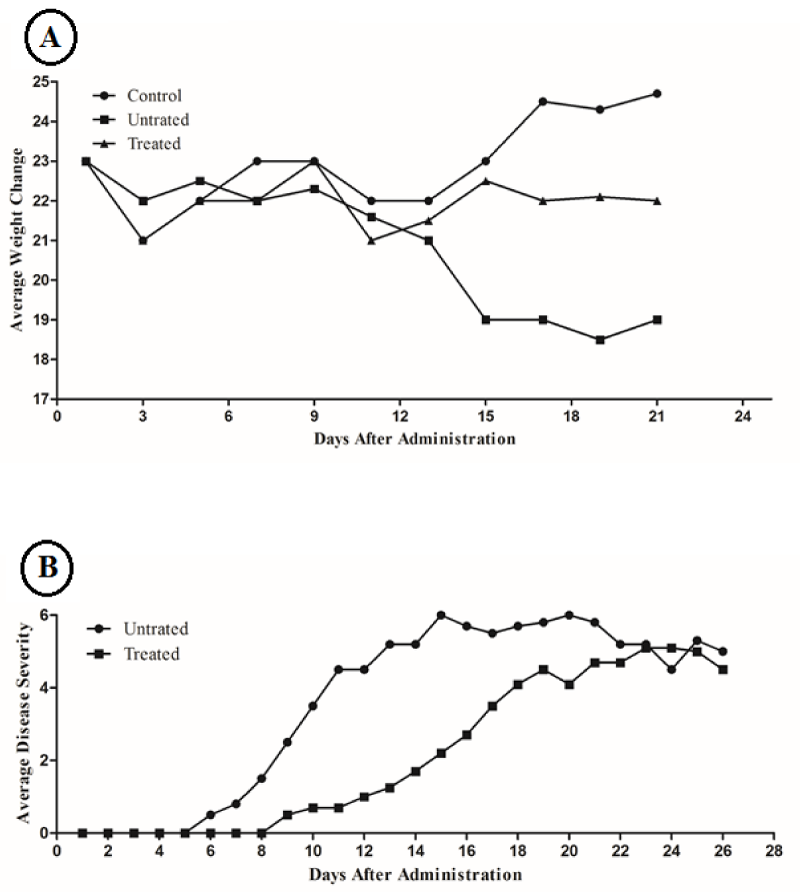 Although the IL-10 levels and mRNA expression in supernatant of and within splenic mononuclear cells in the absence of MOG 35-55 from sesame oil treated EAE mice were different than untreated group, these differences were statistically insignificant (Tables 1,2, Figure 2 III). 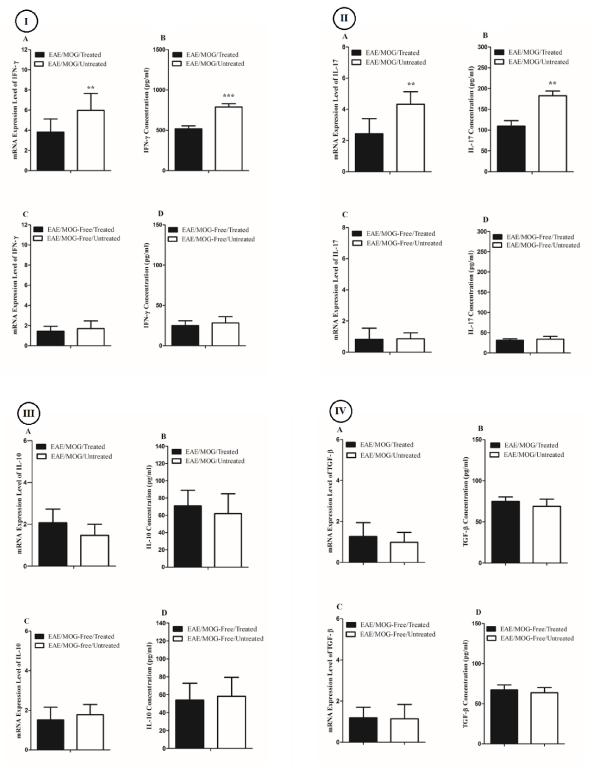 Figure 2: Bar graphs illustrate concentration and relative mRNA expression of the IFN-γ (I), IL-17 (II), IL-10 (III), and TGF-β (IV) in the supernatant of and within mononuclear cells from four categories of mice.

Sesame oil was observed to reduce the IFN-γ levels and the disease severity in EAE mice. IFN-γ is an important cytokine of cell mediated immunity (CMI) which mainly produced by macrophages and T cells. The IFN-γ produced by TH1 cells plays a meaningful role in the pathogenesis of MS and EAE [14,15]. Sepulcre et al., indicated that there is a relation between the number of IFN-γ producing cells and the severity of disease in MS patients [16]. Investigations also indicate that anti-IFN-γ has curative impression on the TH1 mediated autoimmune disorders. Furthermore, studies report that there is an enhanced IFN-γ levels during MS and EAE [17]. It has been shown that IFN-γ increases the disease severity through leukocyte infiltration in brain, activation of macrophages and nitric oxide production [18]. There is no clear evidence regarding a mechanism by which the sesame oil can reduce IFN-γ and disease severity. Some studies show that sesame oil has the potential of apoptosis induction in tumor cells [19]. Miyahara et al., showed that sesame oil has apoptotic effects on Molt-4B lymphoid cell line [20] and Salem et al., demonstrated that administration of sesame oil is capable of suppressing the proliferation and metastasis in EL4 lymphoma cell line in C57BL/6 mice [21]. Considering these proofs, it can be prematurely inferred that sesame oil may act through inducing apoptosis or restriction of inflammatory cells proliferation and/or modulating TH1 and TH2 responses leading to reduce IFN-γ levels and therefor diminish EAE severity.

On the other side, IL-17 levels were realized to be decreased in treated mice in comparison to untreated group. Observations suggest that IL-17 plays an pivotal role in the activation of encephalitogenic T cells during the sensitization phase of EAE [22]. On the contrary, it has been recently reported that IL-17 producing CD4+ T cells enhance the disease severity of EAE and that treatment with anti-IL-17 neutralizing antibodies during the elicitation phase suppressed disease development [23]. These observations vigorously point out that IL-17 is involved in the pathogenesis of EAE during both the sensitization and elicitation phases. It can be inferred that IL-17 negatively manipulates the development of IFN-γ producing TH1 cells. As a result, IL-17 and IFN-γ may mutually collaborate to regulate the development of these cytokine producer cells over the course of immune responses.

Our findings show that IL-10 levels are increased, however insignificantly, in sesame oil treated EAE mice in comparison to untreated group. IL-10 is an immunomodulatory cytokine produced by TH2 cells [2] and has suppressive effect on TH1 responses [24]. Oneill et al., described the IL-10 function in regarding to suppressive effect on EAE progression [25]. IL-10 is thought to act probably through modulation of TH1 responses and reducing the IFN-γ production which leads to disease amelioration. It has been shown that sesame oil has allergic properties [10]. Since TH2 responses are essential in most perspectives of allergic manifestations, hence sesame oil may detour the immune responses toward TH2. Further surveys would be advantageous to shed new light on the way that sesame oil modifies immune responses.

TGF-β is involved in the induction of oral tolerance in EAE [26]. TGF-β itself has been indicated, when administered systemically, suppresses autoimmunity, both in rat and mouse disease models, including EAE [27]. The relation between sesame oil and TGF-β levels as a Treg product also studied in order to find a plausible effect on EAE suppression, but in the present experiment we could find no significant result.

To sum up all the facts, it seems that implication of sesame oil in modulating the immune response, procrastinate the onset of EAE symptoms as well suppress EAE severity, may root in reduction of IFN-γ and IL17 and also incremen ent of IL-10 production.