Copyright License: © 2019 Plaikner A, et al. This is an open access article distributed under the Creative Commons Attribution License, which permits unrestricted use, distribution, and reproduction in any medium, provided the original work is properly cited.

Encephalitis associated with antibodies against N-methyl-D-aspartate receptor (NMDAR) was first described in 2007 [1,2]. While annual incidence of all types of encephalitis is approximately 5 to 8 per 100.000, the exact incidence of this specific autoimmune encephalitis is unknown [2,3]. Autoimmune reactions are the third most common cause of encephalitis after infections (mostly viral) and acute disseminated encephalomyelitis (usually postinfectious) [2].

The characteristic syndrome of patients with anti-NMDAR as well as its recovery follows a certain pattern. 70% of patients have prodromal symptoms such as headache, fever, nausea, vomiting, diarrhoea or upper respiratory tract symptoms. Within less than two weeks the patients develop psychiatric symptoms like anxiety, insomnia, fear, grandiose delusions, hyper-religiosity, mania and paranoia. Short term memory loss is common, but difficult to assess. Further symptoms are a rapid disintegration of language, from reduction of verbal output to frank mutism. In children, the behavioural change can be difficult to detect, temper change, hyperactivity and irritability are common. After this initial phase, decreased responsiveness can alter with agitation. Since psychiatric symptoms are dominant, many patients are admitted to psychiatry under the assumption of acute psychosis which often delays diagnosis. Autonomic manifestations such as hyperthermia, tachycardia or urinary incontinence can occur. Seizures are not uncommon but can be masked by oro-lingual-facial dyskinesia or choreoatetosis [1]. Basic diagnostic assessment includes brain MRI, electroencephalograms (EEG), spinal punction and analysis of cerebrospinal fluid (CSF).

MRI shows normal results in 50% of cases, the other patients show a mild signal hyperintensity in the hippocampi, cerebellum or cerebral cortex, frontobasal and insular regions, basal ganglia, brainstem and, rarely, the spinal cord. The EEG is abnormal in most cases, showing non-specific, slow and disorganised activity sometimes with electrographic seizures. The cerebrospinal fluid is abnormal in at least 80% of cases and shows lymphocytic pleocytosis, normal or mildly increased protein concentration and, in 60% of patients oligoclonal bands. Most patients have intrathecal synthesis of NMDAR antibodies [7]. Brain biopsy is not suitable for the diagnosis of anti-NMDAR encephalitis [1].

The current standard treatment includes immunotherapy and removal of the immunologic trigger, such as teratoma or other tumors, when applicable. A good outcome greatly depends on early removal of the tumor [5]. In addition, most patients are treated with glucocorticoids, intravenous immune globuline or plasma exchange, and - if a clinical response is missing - rituximab and cyclophosphamide [5].

Within four weeks, 53% of patients show a clinical improvement, 75-81% reach substantial recovery (mild or no residual symptoms) at 24 months [5]. Up to 25% remain severely disabled or die from the disease [1]. Management of anti-NMDAR encephalitis should initially focus on immunotherapy and detection and removal of a teratoma or tumour. In young women with suspicion of autoimmune encephalitis an immediate gynaecologic consultation should be initiated. After hospital admission of the patient presented below a systematic review of the literature on this rare disease was done.

A 29-year-old patient was admitted after three days of progressive aphasia (bulbar speech, sentence structure disorder) since 3 days. She reported mild prodromal symptoms such as left-sided headache for more than four weeks. Neurological examination was normal besides fluctuating speech disturbance. While word and sentence recognition was not affected, the patient had difficulties forming sentences, had phases of stuttering and mute episodes, where she was not able to answer at all and seemed desperate about her condition.

There was no sign of infectious disease. Solely CSF showed the tipical lymphocytic pleocytosis with 27/µl cells, oligoclonal bands and normal protein level. Antibodies against NMDAR were highly positive in the cerebrospinal fluid and blood serum, which in conclusion lead to the diagnosis. Immunotherapy with corticosteroids and intravenous immunoglobulins was started immediately and the patient underwent gynaecological examination. The transvaginal ultrasound showed a tumour of 6 x 4 cm of the left ovary with mixed echogenity suspicious for teratoma. The patient gave consent to laparoscopic salpingoophorectomy, and the procedure was performed the following day. Final histopathologic examination showed mature teratoma without signs of malignancy. In the following days the patients’ condition was fast improving under ongoing therapy with intravenous immunoglobulins (30 gr per day on 5 consecutive days). The patient was discharged three days after the operation. At follow-up investigation after 3 months she had completely recovered. 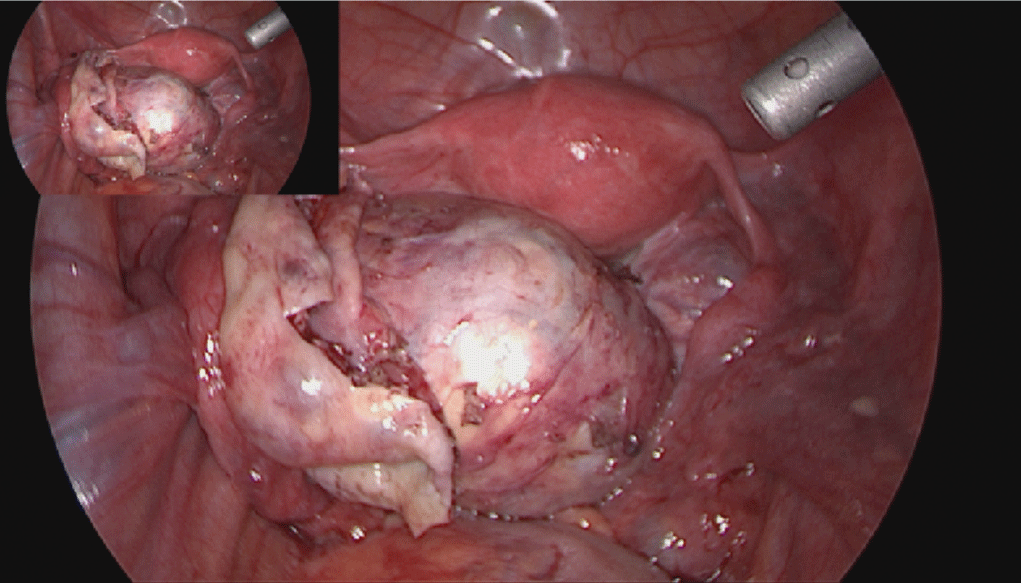 Anti-NMDA receptor encephalitis is a neurologically well-defined autoimmune disease with a progressive clinical course of neurological and psychiatric symptoms. The outcome is favourable, if diagnosis can be made quickly and treatment starts early. Triggers of encephalitis are viral infections (herpes simplex typ 1, west nil virus, enteroviruses and varicella zoster virus), tumors and other unknown factors [2]. The pathogenic role of anti-NMDAR antibodies has been proven in vitro and in vivo [2]. The target is the NR1 subunit of the NMDA receptor [8]. Binding of the antibodies and the receptor leads to internalization of the receptors and their concentration in the postsynaptic membrane decreases [2].

As shown in autopsy and pathological studies, ovarian teratomas can contain tissue of mature and immature neurons expressing NMDA receptors. Inflammatory cell infiltrates are found in tissue samples of patients with anti-NMDAR encephalitis. Therefore teratomas may play a role in triggering the synthesis of such antibodies [2].

Hypertriglyceridemia induced pancreatitis in pregnancy pose a spectrum of risks to the mother and her fetus. Though the management is challenging but early diagnosis, involvement of a multidisciplinary team and antenatal fetal surveillance minimize maternal and fetal morbidity.

Multi-centered, large case series are required to determine the metabolic effects on the fetus and the need for guidelines for timing the delivery in refractory cases.

Early treatment is crucial for achieving a good outcome. Most patients are treated with glucocorticoids, intravenous immunglobuline or plasma exchange, and if a clinical response is missing, rituximab and/or cyclophosphamide is given [5]. Prompt immunotherapy and complete tumor resection are prerequisites for a favorable outcome [2,9].

The presence of a tumor as underlying cause depends on age, sex, and ethnic background. In 46% of women a benign or malignant neoplasm can be detected. It is rarely found in girls younger than 12 years (6%) and male patients (6%) [2]. Ovarian teratoma is the most common underlying tumor, although extraovarian teratoma (2%) and other tumors (4%, e.g. lung, breast, testis, ovary, uterus, thymus and pancreas) can be found [2]. While neurologists see many cases of anti-NMDAR-encephalitis, the disease is relatively unknown amongst gynaecologists, even though an essential part of the treatment is the removal of tumor.

Anti-NMDAR encephalitis mostly affects women in reproductive age, thus different ways of tumor removal should be discussed to preserve ovarian tissue for fertility. Very often a salpingo-oophorectomy is performed, especially in small lesions where the location of the tumor can’t be identified macroscopically. As bilateral teratomas are described in 15% of cases [10] (Figure 1), it is important to find fertility sparing options for the young patients. Asai et al., showed similar outcomes with cystectomy as with adnexectomy [11]. Jones et al., described a case of a 29-year old women with anti-NMDAR encephalitis and an 8 mm ovarian lesion, which was selectively removed via ultrasound-guided laparoscopy [9]. Another clinical scenario suggests that patients with no response to first- and second line immunotherapy may benefit from the removal of normal-appearing ovaries. Two identical twin sisters with anti-NMDAR encephalitis did not improve after immunotherapy. One twin received immunotherapy only and died from the disease, her sister accepted bilateral salpingo-oophorectomy and recovered gradually [2]. Theoretically, selective ovarian vein sampling could be undertaken to measure anti-NMDAR antibody concentration, extrapolated from a similar technique that has been successfully used in the diagnosis of androgen producing ovarian tumors not visible with conventional imaging modalities. Alternatively, bilateral ovarian wedge biopsies could be performed, to help identify occult teratomatous tissue [9].

Adnexectomy should be reserved for cases of suspected immature teratomas and treatment-resistant cases with no sign of teratoma.

Our patient showed typical symptoms for anti-NMDAR encephalitis, she was diagnosed quickly and treated by immunotherapy with corticosteroids and intravenous immunoglobulins as well as laparoscopic salpingo-oophorectomy although the above mentioned studies show that probably an ovary sparing operation would have been sufficient. Our case supports the assumption that a prompt diagnosis and treatment can result in a favorable outcome for the patient. In conclusion a wideer knowledge of this disease amongst gynecologists could be beneficial for patiernt as it might lead to earlier diagnosis and faster treatment.