Copyright License: © 2019 Athar S, et al. This is an open access article distributed under the Creative Commons Attribution License, which permits unrestricted use, distribution, and reproduction in any medium, provided the original work is properly cited.

Pancreatitis in pregnancy is reported around 3-4 % worldwide [1-3]. Hyperglyceridemia induced pancreatitis accounts for 4 % of all cases of acute pancreatitis in pregnancy [1]. The triglyceride level may increase two to four times the normal level during pregnancy and may cause injury of the endothelium. This may lead to preeclampsia or pancreatitis. Though rare, hypertriglyceridemia induced pancreatitis may lead to fatal maternal and fetal complications, even maternal death [4-6]. Acute complications of electrolyte imbalance, acute respiratory distress syndrome, disseminated intravascular coagulation and preterm labour may worsen the clinical situation. Patients are also reported to have several other complications including preeclampsia, gestational diabetes retinal detachment, ascites, pleural effusion, and pericarditis [4,5]. Its management during pregnancy remains a challenge for physicians. As Fenofibrate is not safe in pregnancy, insulin infusion remains the treatment of choice in most of the cases [7,8]. However in patients with need of prolonged Insulin infusion, its effects on fetus are unpredictable and the psycho-socio-economic impact of prolonged hospitalization on both the patient and her family and the hospital. In refractory cases timing of delivery remains a challenge for physicians. Here we report a patient presenting with hyperlipidemia induced pancreatitis and the challenges faced in her management.

A 35 year Gravida 5 Para 4, Asian lady presented at 30 weeks of gestation to the emergency department with complaints of acute onset of epigastric pain. Pain was severe in intensity, continuous in nature and was radiating to her back. It was associated with recurrent vomiting. It was aggregated by food intake, not relieved by analgesia.

She was seen initially in the joint endocrinology and Obstetrics clinic as a case of gestational diabetes. She was on Metformin 500 mg twice daily for glycemic control. Glycemic control was suboptimal, hence at her antenatal visit at 28 weeks of gestation the dose of Metformin was increased to 1000 mg twice daily and started on Inj Insulin Detemir 5 units subcutaneously at bedtime. HbA1C was 6.2. Growth scan at 28 weeks was within normal limits.

She had previous 4 normal deliveries. Last pregnancy was complicated with gestational diabetes. There was no significant medical or surgical history in the past.

Differential diagnosis after history and examination were of pancreatitis, appendicitis and diabetic ketoacidosis.

On evaluation of her lab results, urine ketones were negative, pancreatic lipase and amylase were 165 U/L and 188 U/L respectively. Total Leucocyte count was normal (7900/ microliter). Renal function test revealed grossly lipemic values so lipid profile was requested as well. Level of Cholesterol (21.3 mol/l Vs < 5.2 mmol/L) and triglycerides (*>11.3 mmol/l Vs < 1.7 mmol/L) were very high as shown in table 1. Abdominal ultrasound revealed small gall stones but there was no evidence of cholecystitis.

Patient was hydrated, electrolyte imbalance was corrected and analgesics were given. Insulin/Dextrose/Potassium infusion was commenced to decrease the levels of triglycerides. Thromboprophylaxis was given. She was on prophylactic dose of Low Molecular weight Heparin (Enoxaparin) during her stay in the hospital.

She was clinically unwell and pain score was not improving even after opioid analgesics so she was transferred to intensive care unit for close monitoring. She was under care of multidisciplinary team involving Physicians, Endocrinologist, Dietician and Obstetricians.

Some of the challenges faced in the management were in keeping the triglyceride levels to a normal level and timing of her delivery. Though the pancreatic enzymes were back to normal levels in a couple of days (Chart 1), she had episodes of hypokalemia (Chart 2) which were managed by Potassium Chloride infusion. Her cholesterol and triglycerides levels were fluctuating on and off even with the continuous infusion of Insulin (Table1, Chart 3). She also had episodes of hypoglycemia even on low doses of Insulin infusion (Chart 4). 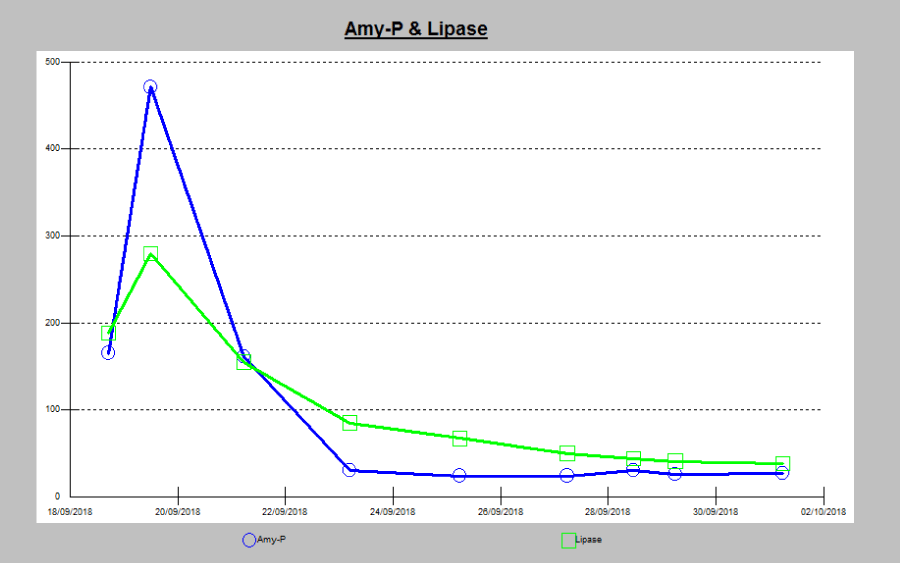 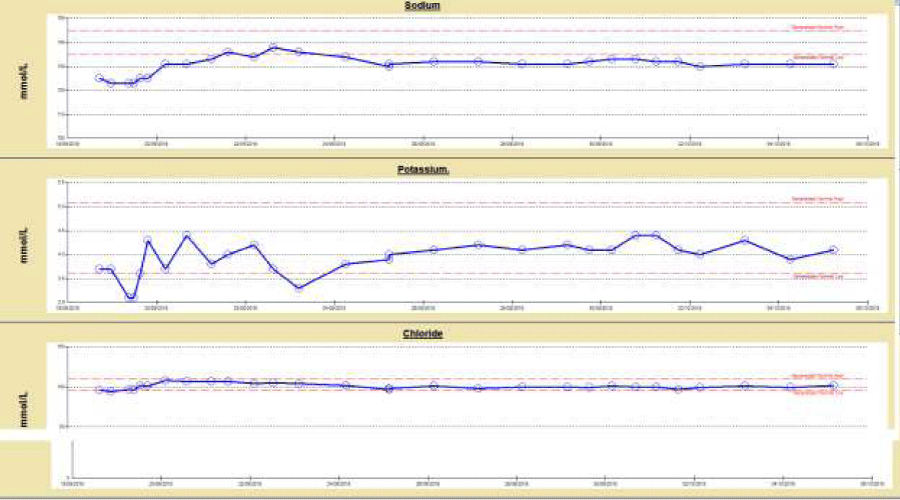 Chart 2: Serum Electrolytes: She had episodes of hypokalemia which were treated with Potassium Chloride infusion. 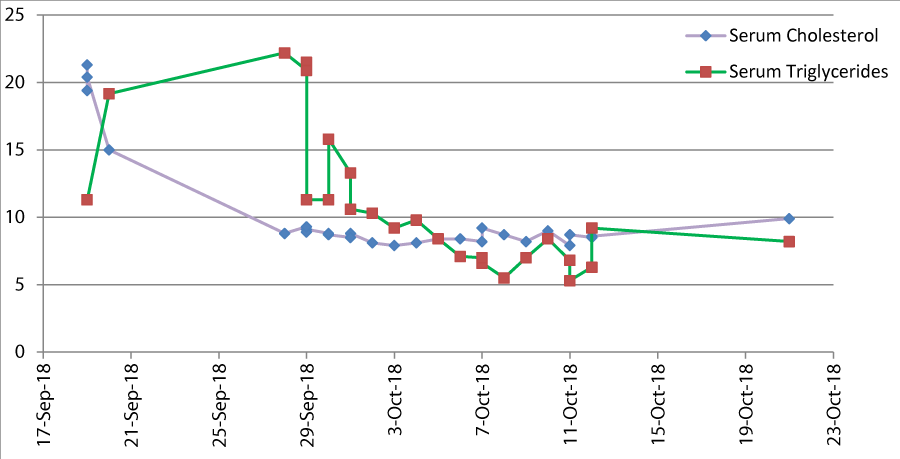 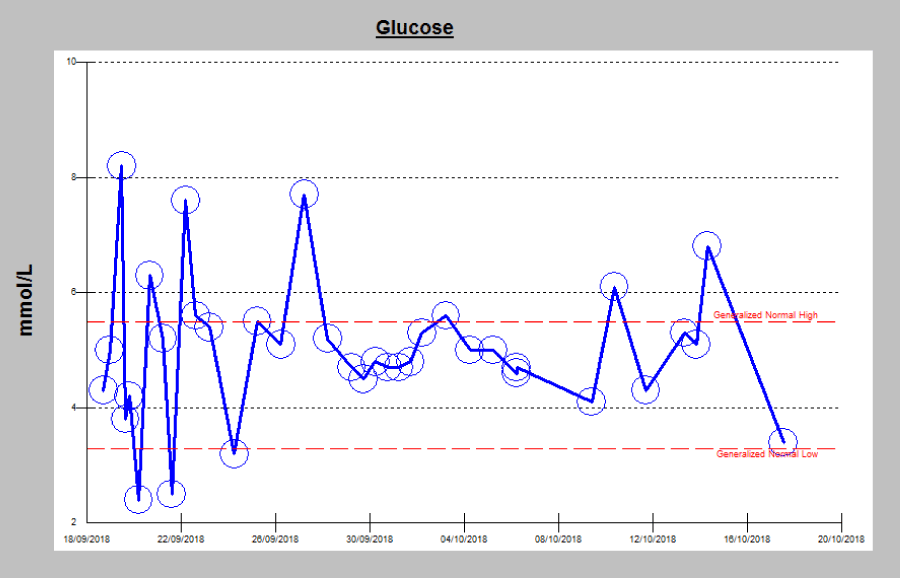 She was on continuous Insulin infusion for almost 3 weeks. Whenever Insulin infusion was stopped, triglycerides were significantly increased. She was monitored in high dependency unit till she was clinically and biochemically stable.

Reviewing the literature, in absence of national guidelines, no evidence of timing of delivery in such cases was noted. However in patients with hyperglyceridemia induced pancreatitis in pregnancy unpredictable neonatal outcomes were observed. So decision for induction of labor at 34 weeks gestation was taken.

Labor was induced at 34 weeks and she had uneventful labor and delivery. Neonatal outcome was satisfactory. Evaluation for metabolic disorders was negative for the baby.

She was monitored for another 72 hours and was discharged home in stable condition.

Follow up for genetic screening for triglyceridemia and Endocrinologist was given.

There are many challenges in diagnosis and management of hypertriglyceridemia and acute pancreatitis due to it especially during pregnancy as there are no properly defined management guidelines or recommendations for it.

During pregnancy, it is well known that with the effects of estrogen, progesterone, and human placental lactogen, plasma lipid levels increase [10].

There is usually two to fold four rise in plasma triglyceride during pregnancy but this is well tolerated and this does not affect mother or fetus but in some high risk women triglyceride might increase to level above normal which is usually more than 95th centile for the age and is some up to severe level which is most cases in defined as above 1000mg/dl or 11.4 mmol/litre [12].

Whom should we monitor for hypertriglyceridemia in pregnancy and why?

Pregnancy is like a stress test for life. As pregnancy unfolds the risk for diabetes, hypertension, anemia later in life, changes in lipid levels might unfold risk for high triglyceride and lipid level in later life.

Risk factors for hyperlipidemia are same as that for non-pregnant women like obesity, weight gain, hypothyroidism, both gestational and non-gestational diabetes, alcohol consumption, and such as low-molecular-weight heparin and corticosteroids and beta blockers [5,13].

1. Lifestyle modifications: like exercises and dietary advice which includes avoiding concentrated sugars and low fat diet, to take care of lipid level as well as it will optimize sugar control [14].

2. Omega 3 fatty acid during pre pregnancy has shown to be beneficial prepregnancy in lowering triglyceride level [15].

3. Patients who are on lipid lowering agents like those with familial hypertriglyceridemia or preexisting diabetes should be counseled about drugs and their safety during pregnancy and exacerbating factors.

Risk of hypertriglyceridemia during pregnancy

Gestational hypertriglyceridemia though not very common during pregnancy can lead to many severe complications. Most commonly associated is acute pancreatitis (4-6% of all pancreatitis patients) as seen in our case report. Other complications include hyperviscosity syndrome, preeclampsia and risk of hyperlipoproteinemia in future.

Acute pancreatitis in pregnancy can lead to serious complications like electrolyte imbalance, acute respiratory distress syndrome, DIC, preterm labour (12%) which can be spontaneous or iatrogenic, miscarriage (6%) [7].

Management of hypertriglyceridemia during pregnancy

To avoid complications due to high triglycerides during pregnancy it is crucial to monitor the triglyceride level and manage it. In the absence of routine monitoring and diagnosis of hypertriglyceridemia during antenatal period many cases are diagnosed once patient presents with complications as in our case like pancreatitis. In such cases it is important to consider other causes of acute pancreatitis like gall stones. So ultrasound imaging is necessary together with consultation with surgeon. This will also help to rule out other causes of acute abdomen.

Multidisciplinary team approach: which include involvement of obstetrician, dietician endocrinologist and in case of complication or acute increase involvement of intensive care team, anesthetist and pediatrician.

Timing of delivery and mode: There is currently no proper evidence regarding what threshold of triglyceride level needs early elective delivery.

Early elective delivery by induction of labour can be considered in patient with third trimester hypertriglyceridemia needing continuous intravenous therapy or patient with complications.

Studies have shown that risk of fetal loss is more in cases of acute pancreatitis in pregnancy due to hypertriglyceridemia than other causes of pancreatitis [6]. So these cases need special attention and monitoring for mother and fetus and timely intervention to void maternal and fetal complications.

Hypertriglyceridemia induced pancreatitis in pregnancy pose a spectrum of risks to the mother and her fetus. Though the management is challenging but early diagnosis, involvement of a multidisciplinary team and antenatal fetal surveillance minimize maternal and fetal morbidity.

Multi-centered, large case series are required to determine the metabolic effects on the fetus and the need for guidelines for timing the delivery in refractory cases.